Washington DC and the surrounding area have so much to offer that it is worth returning on a regular basis. It is the only way to see even of fraction of what this amazing city has to offer, as no single trip will be long enough to see and do everything available here.  To help you choose, I’ve highlighted most major attractions and all of my favorites on the map below.  I’ll say a bit more about some of them (and provide some links) in the text that follows.

Most of the sights of interest to visitors to Washington DC are located on or near the National Mall, near the US Capitol, in the neighborhoods just to the north of the Mall, or in Georgetown. All of these areas are generally well-served by transit and easily accessible without a car.

Attractions located further afield, including the National Zoo and the National Arboretum, can be more challenging to visit via transit.

For most tourists Washington DC means the National Mall and its iconic government buildings, museums, and monuments. Just seeing a few of these could easy fill several days, so visitors need to choose which sites they will see and which they will save for another time.

The Mall itself runs in a straight line from the Capitol to the Potomac River, with the White House located adjacent to the mall on the north and a number of monuments located along the Tidal Basin to the south. Most of the Smithsonian museums are located on or very near the mall, as are most of the city’s major monuments.

The Capitol Hill area runs from the US Capitol to the east, where government agencies and office buildings give way to historic residential neighborhoods.  The Library of Congress, the Folger Shakespeare Library, and the Supreme Court are all located near the Capitol. Continue deeper into the neighborhood to discover historic residential areas and the Eastern Market.

North of the Mall

Most of the Washington DC attractions that aren’t located on the National Mall are located in one of the neighborhoods immediately to the north. This area includes many neighborhoods, so I’ve tried to make it simpler for visitors unfamiliar with the city by dividing the area north of the Mall into two sections based on whether they lie to the east or west of the White House.

East of the White House: The Penn Quarter and Chinatown

A mix of neighborhoods, this part of the city includes some of what would traditionally be considered “downtown,” the District’s tiny Chinatown, a number of noteworthy museums.

West of the White House: Foggy Bottom and Dupont Circle

The White House anchors the eastern end of Foggy Bottom and is the area’s most prominent attraction. However, there are many things to see and do in the part of the city and it is one of my favorite areas to stay when I visit.

Georgetown was a wealthy tobacco and flour port before Washington DC existed. Today it is a wealthy enclave where charming streets are lined with trendy shops, quality restaurants, and historic homes.

There is no Metrorail stop in Georgetown, and the nearest stop (Foggy Bottom) is a hike from the heart of the city. Fortunately, the DC Circulator has a couple of routes that DC visitors can use to easily get to Georgetown.

The intersection of Wisconsin Avenue and M Street is the heart of the Georgetown commercial district and this is where many of the area’s shops, galleries, and restaurants are located. It’s a fascinating place to window shop and people watch.

While Georgetown has a lot of 18th century architecture in this part of the city, N Street east of 31st Street is the place to go to see American Federal style architecture. Not just for serious architecture buffs, this is a great place for anyone to step back in time for a bit – just keep in mind that these are private residences, so be respectful of the homeowners’ privacy and stay on the public walkways.

The Chesapeake and Ohio Canal

Canals were on the cutting edge when it came to transportation in the early years of the 1800s. Running 184 miles from Georgetown to Cumberland, Maryland, the builders saw the canal as part of a network that would tie the growing nation together. While those dreams collapsed with the coming of the railroad, the first 15 miles of the canal (to the Great Falls of the Potomac) are now part of the Chesapeake and Ohio National Park. There is a visitor center and trail connection in Georgetown, where it is possible to take a short cruise in a traditional mule-drawn canal boat. Parts of the canal are also open for kayak and canoeing.

The oldest house in Washington DC provides a glimpse of life in Georgetown in the days before the Revolutionary War.

North of downtown, Dumbarton Oaks estate includes a house museum, gardens, and what sounds like wonderful collections of Roman, Byzantine, Egyptian, and pre-Columbian items. Reaching Dumbarton Oaks appears to be a little tricky without a car, so I’ve never managed to get there.

Reagan Washington National Airport (DCA ), most often referred to as Washington National, is by far the most convenient if you are traveling domestically (there is no customs facility for international travel) and staying in the city. It’s located within view of the Capitol and National Mall (directly across the Potomac and slightly to the south in Arlington) and is served by two Metrorail lines. Once on the ground, all you need to do is grab your luggage, walk to the station area, buy a ticket from one of the self-serve ticket machines, and hop on the next train headed toward your hotel.

As a bonus, if you sit on the left side of the plan and the wind allows a landing from the north, you may start your visit with a wonderful aerial view of the Mall and its monuments. It doesn’t happen every time, but when it does – wow!

Located just south of Baltimore and about 30 miles north of Washington DC, the Baltimore/Washington International Thurgood Marshall Airport (BWI) offers another gateway to the DC area. BWI is said to be a good alternative to Dulles, with good facilities and low-cost bus connections to the Metrorail system. However, when I flew in here (quite some years ago now) I found it to be neither as cheap nor as convenient as claimed. Maybe it was just me or maybe it’s changed, but, unless you are spending time in this part of Maryland or are a devotee of Southwest Airlines, National is a better choice for domestic travelers.

Washington Dulles International Airport (IAD) is located in what has been a fairly isolated area 25 miles west of downtown DC. DC Metro is in the process of building a new rail line (the Silver line) to connect the airport to the city and the rest of the rail system. However, it’s a bit unclear when that project might be completed. (Construction is underway, but the completion date keeps moving farther and farther into the future.) Until then, there are several bus options and the usual range of private services providing transportation into the city itself.

I generally don’t fly into Dulles unless I am making an international connection, however, there are a few cool things about this airport.

The airport’s most obvious attraction (aside from the number of connecting flights) is the classic Eero Saarinen main terminal that appears ready to soar into the sky. 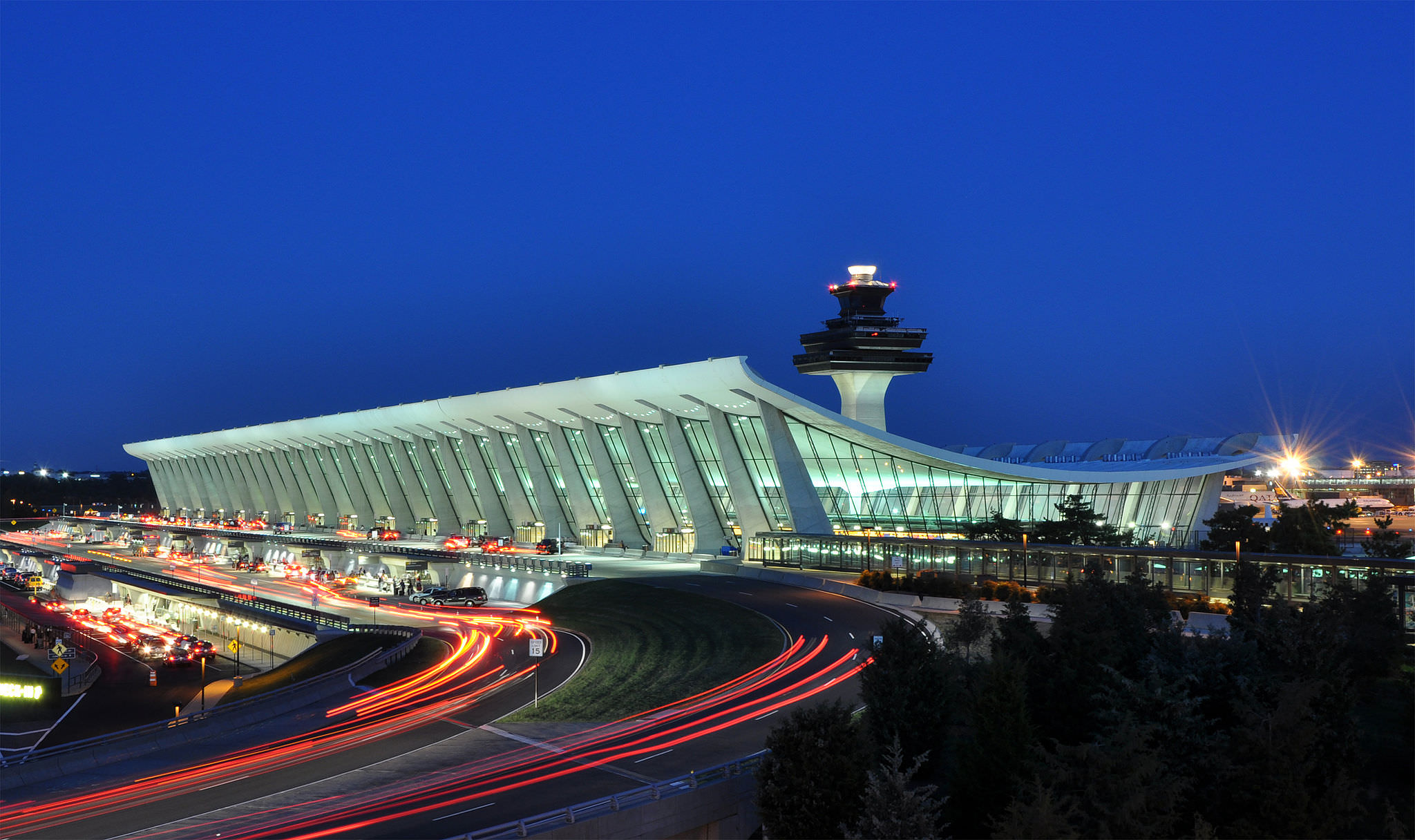 It’s been expanded over time, but has stayed pretty true to Saarinen’s original design. That means it is beautiful to look at, but not as functional as it once was.

The most unusual feature (most travelers likely wouldn’t consider it an attraction) is the use of “mobile lounges” (also called “plane mates” or “people movers” or “those weird bus things that go up and down”) to get passengers from the plane to a concourse.

The boxy compartment is raised and lowered as needed and driven across the airport (often while still in the air) packed with passengers. Riding in one of these – or even watching them crawl around on the tarmac – is one of the weirder airport experiences you can have. They seem like something out of a bad 1950s Sci-Fi movie. (Note that they are ever so slowly being phased out in favor of a more traditional train, so don’t wait too long if you want to check these out for yourself!)

Finally, if you find yourself with a long layover at Dulles, there is a bus that will take you to the Smithsonian National Air and Space Museum’s Udvar-Hazy Center , which is 15 minutes away. (It’s actually within the Dulles airport complex.) This is where you can see the Space Shuttle Discovery, among other large items on display. There is also an airport observation tower and a mezzanine that provides a view of restoration work in progress.

Washington DC is well served by rail, with Amtrak, Maryland Rail Commuter (MARC) trains, and Virginia Railway Express (VRE) all serving Union Station in the heart of the city near Capitol Hill. DC Metrorail also stops at Union Station, providing a smooth connection with the other rail services.

Driving in the communities around DC is no different than driving in any other large urban area. However, once inside the beltway, you’ll discover there are no true freeways into or through the heart of DC itself. Personally, I think this is a good thing; but there are plenty of DC commuters who think otherwise. If you must drive (I get it, I love road trips too), be sure to know in advance exactly where you are going and how to get there.

March 2010 – More Treats at the Department of the Interior

Are you familiar with Rakuten, the online shopping app that gives you cash back when you make a purchase? Did you know you can use Rakuten for travel bookings? Well, you can! END_OF_DOCUMENT_TOKEN_TO_BE_REPLACED

Minnesota has 76 state parks and recreation areas, with the largest concentration in the exceptionally scenic northeastern part of the state. However, there are scenic areas throughout Minnesota END_OF_DOCUMENT_TOKEN_TO_BE_REPLACED