We haven’t been to the Corcoran in many years. More than anything, this reflects our rather picky interest in art – there are a lot of things one or the other of us really likes and a lot that don’t have much appeal for either of us.

Anyway, it seems like time to revisit the Corcoran and get a taste of what we have – or haven’t been – missing.

We make a quick run through the American and European painting galleries, stopped briefly in our tracks by a pair of small drawings by William and Marguerite Zorach.

Neither of us is familiar with the Zorachs, but both William’s take on Yosemite and Marguerite’s “Sailing Ship” really speak to us. The light and airy pencil drawing of Yosemite captures the essence of the place as surely as the dramatic and carefully composed Ansel Adams photographs we’d admired earlier. Similarly, Marguerite’s drawing – she has captured the essence of sailing in her seemingly simple drawing. Exquisite!

The Salon Doré is also exquisite, but in a very different way. This 1770 architectural confection graced a Parisian home before being dismantled and reassembled (more than once) and finally ending up as a museum installation. I’m not a huge French neoclassical fan (it’s usually too ornate for my taste), but this space – while still overly ornate –somehow retains a sense of grace and lightness. It is a pleasure to inhabit this space.

Usually I would spend time communing with John Singer Sargent’s gracefully illuminated work, but today the gallery is filled with school kids enduring a loud lecture.

On the other hand, the gallery housing Giuseppe Croft’s delicate ‘Veiled Nun’ is as serene as the sculpture itself.

I’ve always loved this piece. How do you make stone do that?

We hurry through the modernist galleries.

But then we come to a darkened room lined with wonderful black and white photographs by Gordon Parks.

Parks (who I can claim as a hometown photo hero) may be best known for his iconic image ‘American Gothic.’ While it makes a powerful statement and was controversial in its day, it feels contrived to me, so is not among my favorites.

I prefer the intensely personal images taken in the homes and streets and workplaces of the poor and the disadvantaged. Images so beautiful that it’s impossible to look away, forcing a long look at injustice and how it impacts real people.

Of course, Parks also did stunning fashion photography (among other things not on display here). The thread that seems to run through his work is the ability to artfully portray individual strength and dignity. They are images that draw you in and then linger in your mind.

The gallery housing the Parks images leads directly into the big, bold, in-your-face imagery of the 30 Americans exhibit showcasing modern African American artists. The exhibit is intended to be provocative, but few of these works move me. Most seem relentlessly assertive, even aggressive, and that confrontational attitude is both an aesthetic and intellectual turn-off.

There are, of course, a few artists included in the exhibit who do engage me. Among them, the work of Nick Cave, iona rozeal brown, and Mickalene Thomas, particularly resonates. (It may be unfortunate that all three of these artists are exhibited in the same room – had they been dispersed throughout the exhibit I may have spent more time trying to come to terms with more work that didn’t hold any initial appeal for me.)

Cave’s “soundsuits” are not only beautiful and wildly imaginative, but their intricate construction also demonstrates the beauty of fine craftsmanship itself. They are wearable sculpture at its finest.

While they are wonderfully textural and sculptural, they are best seen in motion – something we didn’t get to see at the Corcoran.

And then there is Thomas, whose luscious embellished paintings (emblazoned with sequins and other sparkly items) portray the complicated reality of the lives of black women. 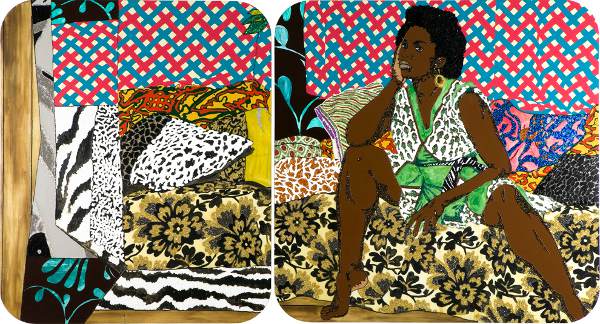 (You have to see them in person to get the full impact – while the beauty of these images comes through on the screen, the depth and drama is lost.)

Finally we come to the work of Claire Healy and Sean Cordeiro. Their show comes in two parts – “Are we there yet?” is an installation featuring an astronaut floating in a universe of planets comprised of junk food.

There is something ethereal about it, but when I turn around at the end of the viewing platform I laugh out loud to see that the astronaut is asleep under the covers with a huge jar of cheese balls (think Cheetos) tucked under his arm. The installation is both profound and funny at the same time. I like that.

I’m not as enamored of “Where We’ve Been, Where We’re Going, Why,” although the idea of painting with Lego really intrigues me. I really like the idea of taking a sculptural object like a Lego and making what is essentially flat art out of it. I’m just not able to connect with the abstractness of the images in this exhibit. . . although I do like the children’s art area associated with the exhibit.