The Apostle Islands consist of 22 low-lying rocky islands along the south shore of Lake Superior in northern Wisconsin. 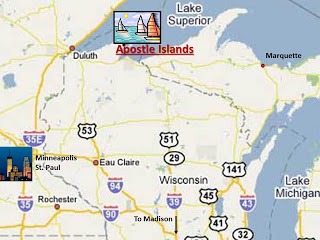 The main gateway to the islands is Bayfield, a charming lakeside town long been known for its downtown marina, great restaurants, funky shops, historic homes, and lively festivals, making it a good destination in and of itself.

In recent years, nearby Washburn has begun to offer an increasingly varied array of dining and shopping options, making it an alternative to Bayfield for those seeking a quieter, less crowded experience.

The lakeshore and islands are a four-hour drive and complete change of pace from my home in Minnesota’s twin cities of Minneapolis and Saint Paul.

While the water is generally too cold for swimming (temperatures vary throughout the lake and some bays were pretty comfortable in early July 2013, while others were still registering surface temperatures of 38 degrees Fahrenheit), Lake Superior draws sailors, motor cruisers, and kayakers to its pristine waters, secluded bays, and sandy beaches.

If nature isn’t really your thing (or if you just need a shore break) several small towns in the area have interesting shops and good restaurants. Bayfield is the largest and most well-known of these, with more than enough activities available to keep even those with acute aquaphobia contented for days. When looking to wander a little farther or when coming to the islands along the shore from Duluth, Cornucopia makes a nice local art break.  The only town in the islands is La Pointe, located on Madeline Island, which is a good place to stop for a little shopping and a bite to eat.

The area boasts activities year-round, from Race Week (sailing) to the sled dog races, with plenty of art and music available throughout the year.

Much of the area is part of the Apostle Islands National Lakeshore, which includes 21 of the islands and 12 miles of mainland shore.

Established in 1970, the Apostle Island National Lakeshore is an area of great natural beauty with rocky cliffs, sandy beaches, sea caves, meadows, and forest. The mainland and some of the islands are home to bear, white tailed deer, and a number of small mammals. There are also reminders of human activity preserved here in the form of lighthouses, a historic fishing camp, and various foundations and ruins. A visitor’s center on the mainland provides an introduction to the area.

If you enjoy sailing and the winds cooperate, you could have a great time here without ever leaving your boat.

Of course, that boat is also your ticket to secluded bays and beaches, historic sites, and a wide variety of hikes.

Just be aware that changes in the weather, underwater rocks and sandbars, freezing weather, and changing winds off the islands make sailing here a challenge.

There is great hiking over a variety of terrain on many of the islands.

Shore hikes range from broad sandy beaches to rocky cliffs, while inland hikes may wander through old growth forest, meander through meadows, or climb up to a point with a spectacular view of the lake.

Trails are generally well marked. Trails are closed if there are aggressive bears around.

The Apostle Islands are home to eight lighthouses (some historic, some still in use) and the ruins of one more. Some of them are open to the public, but there is a lot of history in all of them.

Currently many of the park’s lighthouses are undergoing restoration, so be sure to check before planning a visit.

The islands have been visited by humans since prehistoric times. Along with the lighthouses, a few other remnants of more recent human activity are visible at the brownstone quarries, the Manitou Island Fish Camp, and the McCloud-Brigham Farm.

“Sea caves” can be found on Sand and Devil’s Islands and the mainland near the Lakeshore’s western boundary. On calm days the caves can be entered by small watercraft.

Occasionally the entire lake will freeze over during the winter, allowing access to the sea caves on Sand Island from the mainland.

A variety of small mammals, including otters (we’ve seen them right in the marina at Port Superior), can be found in the islands. While black bears might occasionally be found on any island, Stockton has a high concentration at all times of year. This year (2013) Sand Island has been closed due to a high level of bear activity. While I’ve never seen any bears in the islands, I have seen white tail deer. In addition, a large variety of birds can also be found (especially during spring and fall migration), as the islands provide a variety of habitats.

I don’t fish, but I do like to eat fish and I know that this part of Lake Superior supports commercial fishing for whitefish and trout as well as sport fishing. If you are interested in fishing, many outfitters are available to provide whatever level of service you may need.

Madeline is the only developed island in the Apostles, with commercial development centered in the tiny town of La Pointe.

Bayfield: A charming town with lots of lodging options; good restaurants (including my old favorite Maggie’s, our usual breakfast spot at Greunke’s; and fun shops. Bayfield is a pleasant stop any time of year.

Seasonal events include the summer Race Week and Festival of Arts, the fall Apple Festival, and the winter Apostle Islands Sled Dog Race. Nearby, the Lake Superior Big Top Chautauqua runs a full season of arts and entertainment from June through September.

La Pointe: On Madeline Island, little La Pointe has a few interesting shops and restaurants. It’s a nice place to spend a few hours or a few days. Nearby Big Bay State Park is a pleasant spot from which to enjoy the lake or hike.

Washburn: Washburn is a good place to stock up on groceries and offers a full range of services. It is also becoming a destination itself, with a range of dining and shopping options.

Cornucopia: Further along the coast, tiny Cornucopia is aptly named, stocked as it is with local arts and food.  It’s a nice break when taking the shore route up to the islands.

Monitor the weather diligently if you are going to be out doors, whether on the water or hiking. Conditions can change very quickly.

My 2012 visit to Lake Superior’s Apostle Islands included a variety of weather conditions – a few storms, some good sailing, and still air that provided an opportunity to visit the sea caves on Sand Island. But that was just a tiny taste of what one might find in these lovely northern islands.

My 2013 trip was characterized by the official weather summary for July 4: “The winds are calm. The waves are calm. The sky is clear.” (Perfect weather for everyone but sailors!) 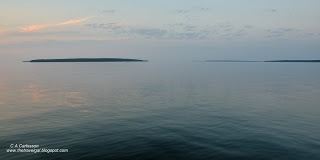 While I’ve had the good fortune of never being in the islands during really severe weather, I’ve encountered wind, cold rain, and pea soup fog, as well as sunny days with gusty breezes perfect for sailing. Temperatures on my trips over the years have ranged from the low 40s (or lower at night) to the 90s, sometimes with a broad variation just from the beginning to the end of the trip.

Mainland areas and Madeline Island can be explored via car, bike, or on foot. Other than Madeline, no vehicles are permitted on the islands.

When the lake is open (spring through fall), there is regular car ferry service to Madeline Island. (Madeline Island also has an airport, for those with access to a private plane.) During winter travel to the island is possible via a passenger windsled or, once the lake ice has solidified, along an ice road.

Other islands can be reached (in season) via shuttle or tour service or private boats. If you aren’t lucky enough to own your own boat (or have a friend with a boat) there are marinas with charter fleets in La Pointe, Bayfield, and Port Superior (back when we used to sail more regularly, we charted through Superior Charters out of Port Superior) as well as a number of outfitters and guided expeditions. This includes a variety of options for touring the islands via Kayak.

For those wishing to improve their sailing skills, there are a number of sailing courses available in the islands, including those of Dreamcatcher, Northern Breezes Sailing School, and Superior Charters’ personalized sailing courses.

Would-be captains should seriously assess their abilities before venturing out – despite the closeness of the islands, Lake Superior is a potentially dangerous lake with storms possible at any time and frigid waters even in summer.

The same is true for kayakers. While kayaking has become increasingly popular in the islands, this is a place where you need to know what you are doing. During our visit in 2012, there was considerable chatter over the radio as the Coast Guard tried to confirm that various recreational boats had picked up all the kayakers that were in the water as a line of strong storms blew in.

The Park Service offers more information and links on their web page.

Those with a live-aboard boat can spend nights in the marina or on the water either at a dock or anchored in one of the bays. Many islands and mainland bays have docks (usually suitable only for smaller boats and on a first-come, first-served basis) and some facilities – usually a pit toilet, but areas with more developed campgrounds also have additional facilities. The park service map identifies docks, campgrounds, and picnic areas.

Camping is available on the mainland and on 18 of the islands in the park. Permits are required to camp in the park.

Hotel, condo, and bed and breakfast accommodations are available on the mainland in and around Bayfield, as well as on Madeline Island.

Are you familiar with Rakuten, the online shopping app that gives you cash back when you make a purchase? Did you know you can use Rakuten for travel bookings? Well, you can! END_OF_DOCUMENT_TOKEN_TO_BE_REPLACED

Minnesota has 76 state parks and recreation areas, with the largest concentration in the exceptionally scenic northeastern part of the state. However, there are scenic areas throughout Minnesota END_OF_DOCUMENT_TOKEN_TO_BE_REPLACED