This post probably should be titled “the sacred and the profane.”

Friday is a day off in Egypt, so the streets are crowded with shoppers.

We too are going to a market – the Khan al-Khalili, sort of the mother of all markets.

The bus drops us at a small park outside the mosque of Sayyidna al-Hussein (this is the holiest site in Cairo and open only to Muslims).

The mosque was constructed in the late 19th century and would blend into the cityscape were it not topped by a very tall and rather distinctive minaret.

There are also several thin, rocket -shaped metal sculptures standing in front of the mosque.

Actually, they turn out not to be sculpture, but gigantic, fully-functional metal umbrellas used to provide shade for the throngs who gather here for prayer. Not needed now, they are neatly folded away. Very cool.

Despite the fact that I have been whining to Romani that I haven’t had enough shopping opportunities, I am one of only three who opt to take Eshak’s tour to El-Azhar Mosque. A little successful shopping this morning and the fact that the Khan al-Khalili isn’t really the place I want to shop for high quality jewelry or crafts, makes the decision to tour the mosque really easy. Besides, I have really enjoyed visiting the mosques and am eager to see a few more.

I’m a little amazed that only Rachel, Marilyn, and I are on this particular tour, but it seems like the perfect number.

We don’t have far to go, but the short distance (and the fact that we cross into a more open area between major boulevards) gives us a bit broader view of Islamic Cairo.

The Mosque of El-Azhar was founded in 970 as a center of Islamic study. Today it is still an important center for learning and the university draws Muslim students from around the world.

The mosque itself has been changed and remodeled over the years, a legacy shown in its mix of architectural styles and intricately carved minarets.

We enter through the 18th century Gate of the Barbers where students once came to have their heads shaved. However, instead of a haircut we simply remove our shoes and set them in the neat wooden shelves provided for that purpose. (As was with the Buddhist temples in Thailand, shoes must be removed before entering a mosque. This difference is that here a head covering is sometimes required and in a Buddhist temple a head covering is prohibited.) Attendants and others sit here and visit while ensuring that no shod tourists continue past this point.

We continue on through the Qaitbay entrance into a large glistening marble courtyard. 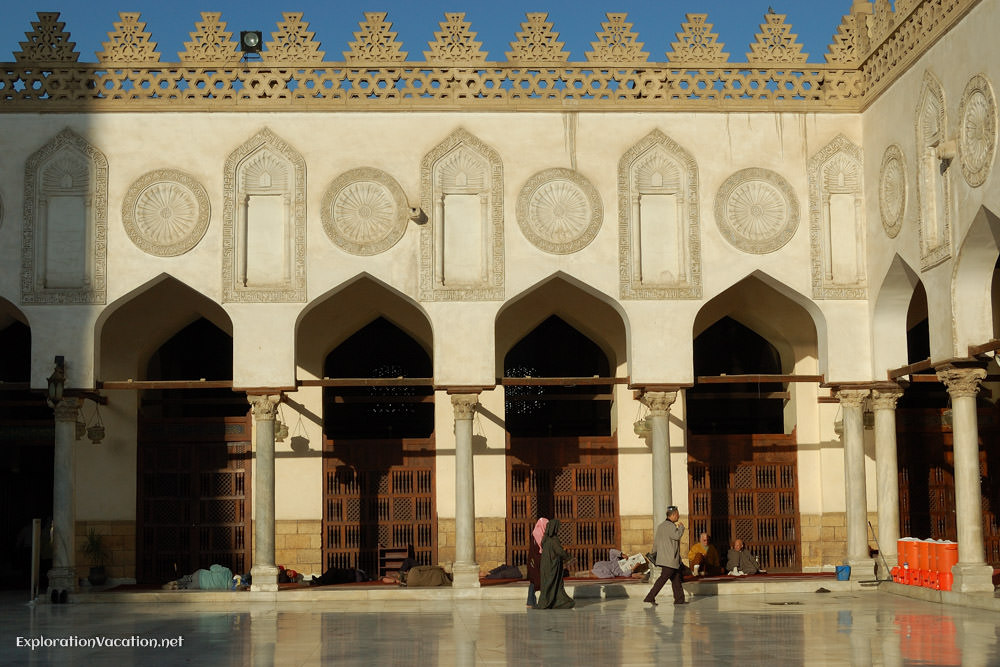 The prayer hall is very large, with inscriptions on the wall and inside the simple mihrab.

Back outside, the sun has dropped in the sky and children run and play in the cool, shady courtyard while we make Isaak pose for photos.

Rachel and I decide to spend the our bit of remaining time wandering through the maze of shops that make up the Khan al-Khalili market. Not having any particular plan, we plunge in.

This market goes back to Cairo’s days as a center of world trade. First built in 1382, this is just one of several markets in this area. While much of the market today focuses on tourist tchotchkes, parts of this market area do cater to local residents. There are also supposed to be high quality craftsmen doing business here, but they are not in the main portion of the market and I do not have time to look for them today. (Next trip.)

I had worn my scarf to visit the mosque and I now leave it on, figuring that will eliminate at least some unwanted attention. Rachel doesn’t wear a scarf and, unlike me, she is really blond (“California girl” blond) so she attracts the vendors like ants to honey. It makes me invisible, which is ideal 🙂

The vendors are friendly, but we don’t dare stop to examine any of the merchandise because we know they will descend on us should we appear interested in any item. As long as we keep moving, all they can do is throw catchy lines at us and see if we’ll bite.

“What can I do to separate you from your money today?”

“I’m single today, how about you?” (Which must have been aimed at Rachel!)

We return to the bus empty-handed.

Are you familiar with Rakuten, the online shopping app that gives you cash back when you make a purchase? Did you know you can use Rakuten for travel bookings? Well, you can! END_OF_DOCUMENT_TOKEN_TO_BE_REPLACED