To explore this area further, we turn back past the Coptic Museum toward the Greek Orthodox Church of St. George.

Built in 1909 after the original church burned, the church towers above the remaining bits of Roman wall, its shape dictated by that of the Roman tower upon which it was originally constructed.

No pictures are allowed inside, but it is a lovely serene place – even with a large numbers of tourists like me.

From St. George we walk through narrow crowded streets to the Church of St. Barbara.

Originally dedicated to St. Cyrus, this church was reconstructed and renamed during the 11th century to house the relics of St. Barbara, a young woman from the 3rd century whose father ordered that she be tortured and killed when she refused to denounce her faith. 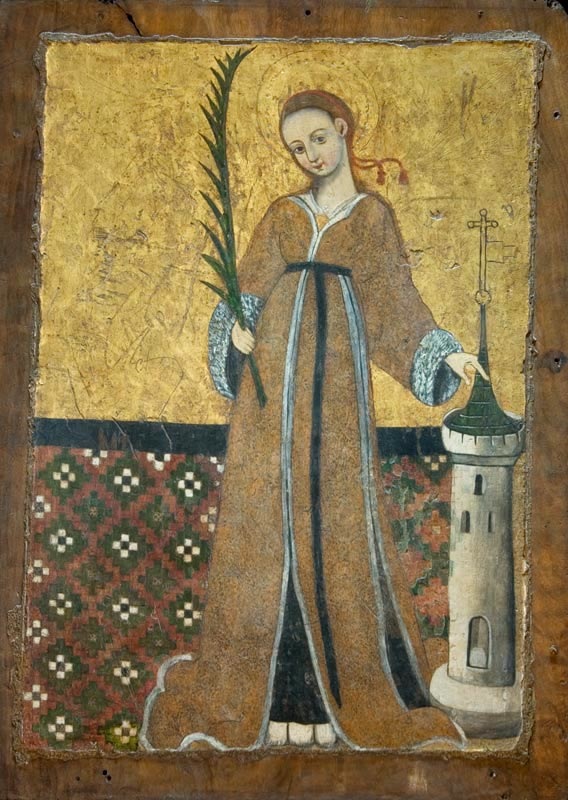 The inside of the church provides an odd juxtaposition, with ornate old icons on the walls and cheerful decorations strung over the pews. It is also a busy place, with tourist groups wandering aimlessly and worshipers moving decisively between icons.

Although this church as has been remodeled extensively over the years, it feels very old.

There is a small chapel off to one side. It is crowded with the members of an extended family awaiting the baptism of their child.

I realize this is a crappy picture, but besides showing the priest (and an adorable little girl clinging to her father), it also shows the curtain that obscures the alter when it is not in use. The figures appliqued on these curtains are icons and are used as such – I assume they are sealed behind plastic to protect them from the constant touch of human hands. (Most icons of every type in all churches here are protected by a sheet of glass or plastic.) I find these interesting because the very simple appliqué and plastic sheathing are so utilitarian, yet they are objects of devotion.

Our next stop is Ben Ezra Synagogue, which has been located on this site since the 9th century.<
This recently restored synagogue is most famous for the genizah discovered here in 1896. Genizah is the Hebrew word for “hiding place” and refers to a depository for sacred Hebrew books that are no longer usable. Even though no longer needed, documents cannot be thrown out if they contain God’s name and so they are stored in a genizah — usually in the attic or basement of a synagogue. Apparently the genizah of Ben Ezar contained a treasure trove of medieval documents both religious and secular.

The synagogue itself is a testament both to the significant role of the Jewish people in this country and the loss of that community. Today this structure is a museum. It is beautiful and serene inside, but it also feels preserved – a sealed exhibit devoid of life and meaning. It seems empty and lonely.

Our final church today is the Church of Saints Sergius and Bacchus, also known as Abu Serga.

It is dedicated to soldiers martyred in the 4th century and is purported to be the oldest Christian church in Cairo. However, its history actually goes back farther, as it is said to be built on the site of a cave that the holy family hid in during their flight into Egypt. (The holy family’s flight into Egypt is a big deal here. It reminds me of the “George Washington slept here” mythology evident on the East Coast at home. There seem to be signs everywhere that tout a particular location’s connection to the holy family.)

Because Cairo is has built upon itself over time, the current entrance of the church is now below street level, reached by descending a small plain stairway.

I have no pictures from the inside of this church and, honestly, no specific recollection of it. By this point I have seen so many churches so quickly that it is becoming difficult to distinguish between them. I’ve reached church overload.

I do know that we could not go into the cave in which the holy family is reputed to have stayed because it has been submerged as Cairo’s water table has risen.

Are you familiar with Rakuten, the online shopping app that gives you cash back when you make a purchase? Did you know you can use Rakuten for travel bookings? Well, you can! END_OF_DOCUMENT_TOKEN_TO_BE_REPLACED