Hi, I’m Barney. The Travel Gal asked me to do a guest post on our Fourth of July sailing adventure in Lake Superior’s Apostle Islands.

I am a pretty wise old dog and – as often as they let me – I remain an observer (rather than a participant) in the world around me. This makes me a more reliable witness than the Travel Gal herself, who was often preoccupied with releasing a line at the right time or keeping my crazy sister Molly from ending up in the water or figuring out which cooler contained the cold drinks or simply trying not to get seasick. Her pictures are ok though, so I’ll use those to illustrate our story.

Even though the boat belongs to my folks, the Travel Gal and Lane actually got to the marina at Port Superior before we did. During that time they apparently bought ice, loaded all their gear, made themselves drinks, and found books to read. They certainly seemed comfortably settled in when we arrived after a hot, exhausting ride with no air conditioning.

Sitting in the sun as it was, I expected the boat to be just as hot as the car had been, but it was cool inside. I suppose that makes sense since it is floating in a lake with an annual average water temperature of 40º F.  You would think that the rest of them would have had the sense to join me down there, but no. As soon as they finished loading the boat, they sat outside in the hot sun and ate lunch! It must have been over 90 out there, with no breeze. Sometimes I think they are all crazy. 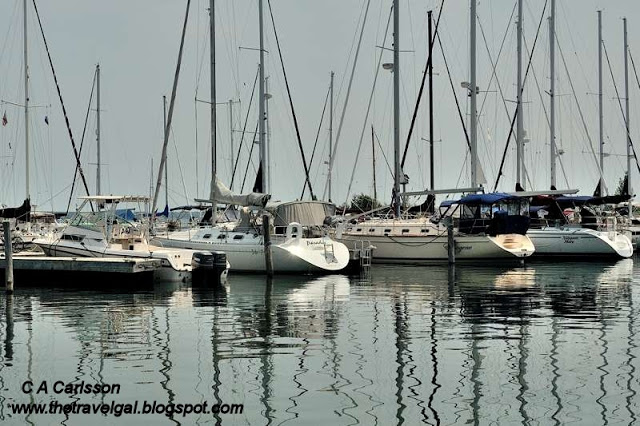 We finally did get out on the lake. Once we did, there was a bit of commotion and then floor began to slant at an odd angle and soon the only sounds were the swish of the water as the bow cut through it and their nonsensical talk floating down from above.  Of course Molly just had to join them and hung halfway up the stairs yipping at them until they hauled her up.

Unlike me, Molly loves being up there. I’d rather be down here in the cabin. . . except, of course, when they get carried away and make the floor slant so sharply that my water dish goes sailing across the cabin, spewing water across the room.

Things went along smoothly for some time before the engine rumbled back to life. It was getting to be time to go out for a walk, but they all seemed very intent on the sky, which was now dark and stormy with lightning. They seemed a little on edge and I got the feeling that it might be a long time before I got to go ashore.

Since there was nothing I could do to help, I took another nap.  That made it easy for me to feel the engine slow to an uneven rumble. Maybe we are there!

Nope. Instead of our getting off the boat, another boat came up alongside us and more people came on board. I guess it was the Coast Guard. They had guns and asked a lot of questions and my dad had to root around in the cabin looking for papers and life jackets and things. It sounded serious. There was some laughter up on deck while all this was going on, but it was tense laughter.

I think they were nervous, but soon I heard my people say good bye and a boat came along side once again and those Coast Guard guys were gone. The boat had passed inspection, but all they did to celebrate was gun the motor and continue on.

It was nearly dark when we set anchor in Presque Isle Bay on Stockton Island and I expected they would drop me in the dinghy first thing for a shore excursion, but almost immediately the wind started blowing and set the boat rocking. Clearly we weren’t going anywhere now. Luckily it didn’t last very long and eventually they loaded us into the dinghy for a trip across the bay in the cool night air.

It felt good to be on land again and the beach here is a nice one. It was very dark though and the air still smelled of storms, so I was actually glad to be back in the dinghy again and headed back to our boat.

We had good timing because, once back on the boat, I didn’t even had time to lie down before the wind started again. We had enough time to eat dinner before the storm really got going, but once it did the boat bobbed and shook and twisted. It made the Travel Gal seasick. (I don’t get sick during storms and my humans never get sick, so what’s her problem?!) Anyway, she was pretty useless, so Mom and Lane did the dishes and cleaned up the cabin while Dad sat on deck, huddled in a corner out of the rain trying to make sure the anchor held.

It was a long night.

Next post: Lighthouses and Caves in the Apostle Islands