Two or three stories above the streets of New York City’s Chelsea and Meatpacking neighborhoods, a former railroad track winds around and (literally) through the historic factories and warehouses that now serve as upscale homes, offices, studios, galleries, and shops. 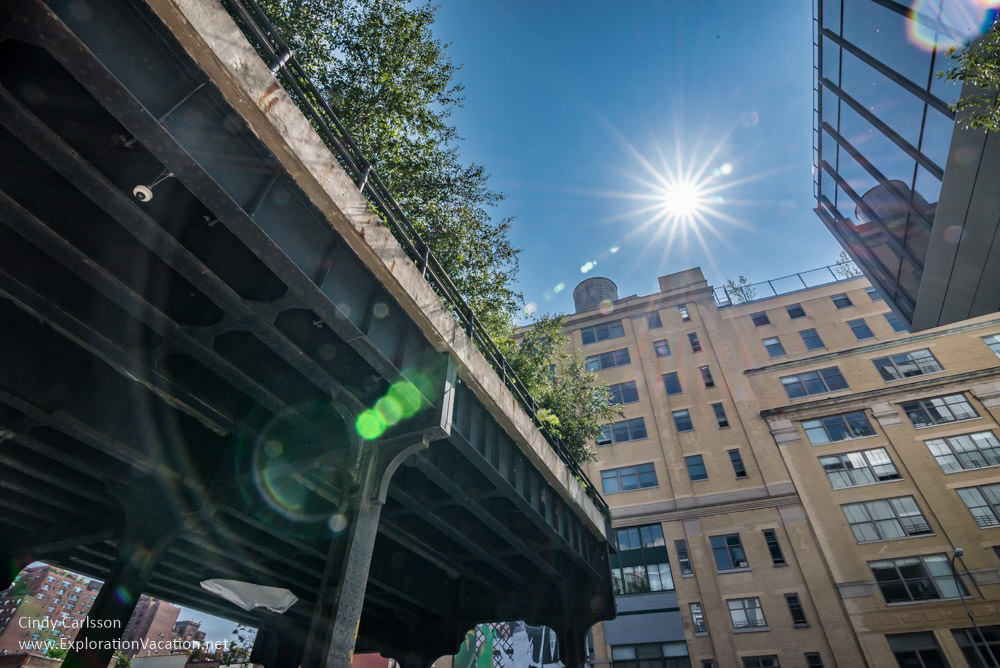 As its name suggests, New York City’s Meatpacking District was once known for its slaughtering and meat packing operations. These facilities attracted related businesses, including major food manufacturers like the National Biscuit Company (Nabisco). (Yes, the filling in an Oreo was once made from lard.) There were also a number of heavy industries located in the area, along with a few light manufacturers and technology companies like Bell Telephone Laboratories. It was a busy place with a whole range of raw materials, equipment, and supplies coming in and packaged foods and consumer merchandise going out – all via trains that ran on tracks set directly into the city street.

As train traffic increased, the number of people killed or maimed by trains also increased. (There were so many fatalities along the train’s route that Tenth Avenue came to be called “Death Avenue.”) After trying several options to separate street traffic from train traffic (including the use of urban cowboys), the decision was made to remove trains from the street entirely by moving them into the air.

In 1934 the new elevated freight track – the High Line – began serving the Meatpacking District and surrounding neighborhood. Not only was the new line elevated, but it was designed to run directly through a number of the buildings it served. This allowed businesses to unload and load indoors where they were protected from the weather and from the eyes of competitors. For example, flour could be loaded directly to where it was needed without fear of rain, meats could move directly from refrigerated storage rooms to refrigerated rail cars, and new products could be secretly packed into train cars for their unveiling in shops throughout the country. Thus, the new rail line eliminated conflicts on the street below AND provided a competitive advantage to the businesses it served.

Nonetheless, its initial success as a rail line was relatively short-lived.

Even as the High Line opened, freight transport in the USA was beginning to change. The railroads that had long dominated the shipment of goods would soon be replaced by trucks. At the same time, the meatpacking industry itself would begin moving out of the city. These trends accelerated over time and sections of the High Line were obsolete within a few decades of their construction. By 1961 the southernmost section of the line had already been abandoned and was about to be demolished. Over time fewer and fewer businesses used the track. Finally, in 1980 a few carloads of frozen Thanksgiving turkeys became the last shipment to travel on the High Line. The elevated railway no longer had a use.

And there things remained for 20 years. The neglected tracks became an abandoned and largely unloved relic of the past snaking through a changing neighborhood.

Throughout those years efforts were made to have the line demolished, but a few individuals repeatedly blocked those plans. Most people initially saw the rail line as an eyesore standing in the way of new development. Over time attitudes began to change. As nature began to slowly reclaim the abandoned tracks, more and more people began to see the line’s potential as an elevated park. In 2004 the New York City provided the first funds for the park. Neighborhood groups and others raised more funds and the first phase of the park opened in 2009. (Additional sections opened in 2011 and 2014, and one final section is expected to open in 2017.)

I studied urban planning in graduate school and remain a bit of a planning geek. High Line Park was the darling of the urban planning crowd from the beginning. The combination of historic preservation, industrial infrastructure, green space with native plants, and urban revitalization is an intoxicating brew for an urban planner! Nothing like this had been done before, so everyone watched with fascination as plans developed, opposition arose (and was quelled and arose again and was quelled again) until (finally) the first section opened to the public. Planners from around the world – along with every other visitor to New York City – flocked to it.

Everyone, that is, except me.

For whatever reason, it took me another half-dozen years to get to New York City. But last fall I finally got a chance to check out the High Line for myself.

Touring a bit of the High Line Park

High Line Park cuts through a mile-and-a-half of Manhattan between 10th and 12th Avenues, running from West 34th Street in the north to Gansevoort Street in the south. I visited the southern-most section, starting just north of Chelsea Market at about 17th Street and walking south to the park’s end at the new Whitney Museum of American Art.

Standing in the street below, it’s sometimes hard to image that there is a park overhead. 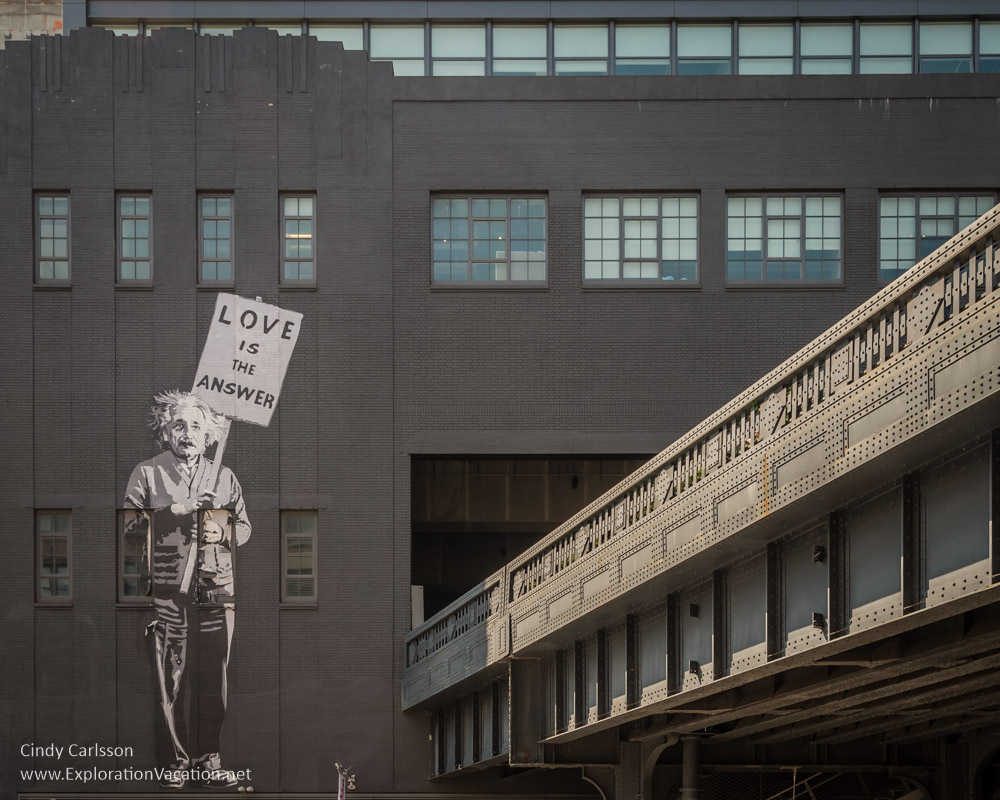 In other spots it’s easy to see that there is something unusual going on up there! 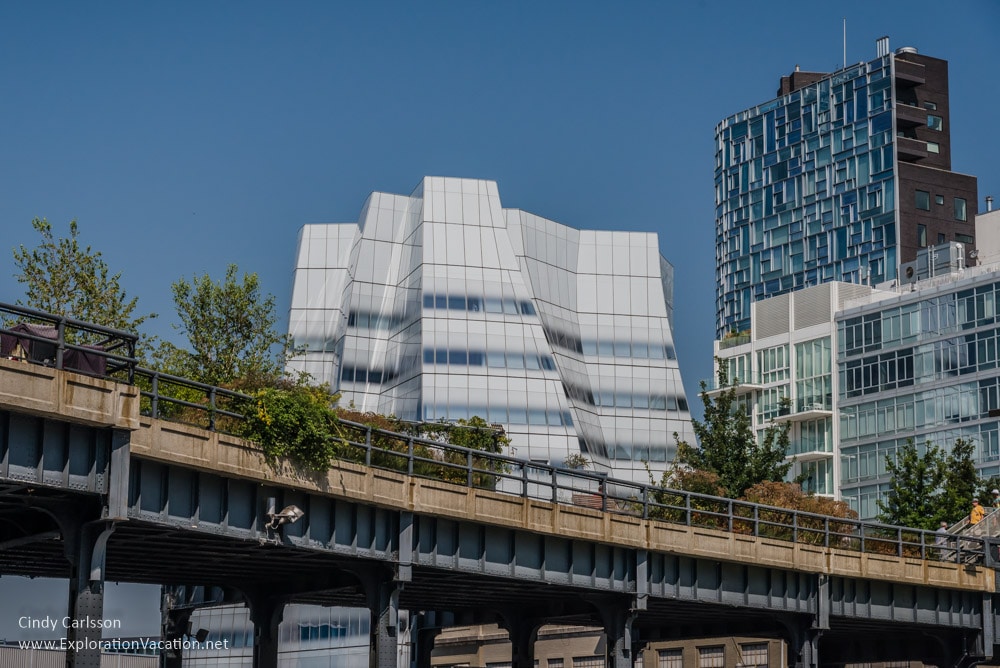 The best way to know for sure what’s up there is to find an entrance and head up to get a good look.

At the top you quite unexpectedly find yourself floating above the street in an oasis of greenery. 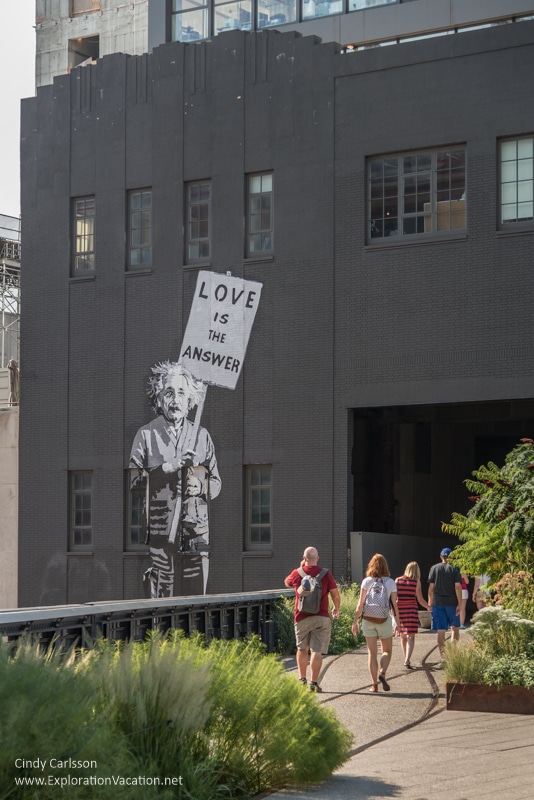 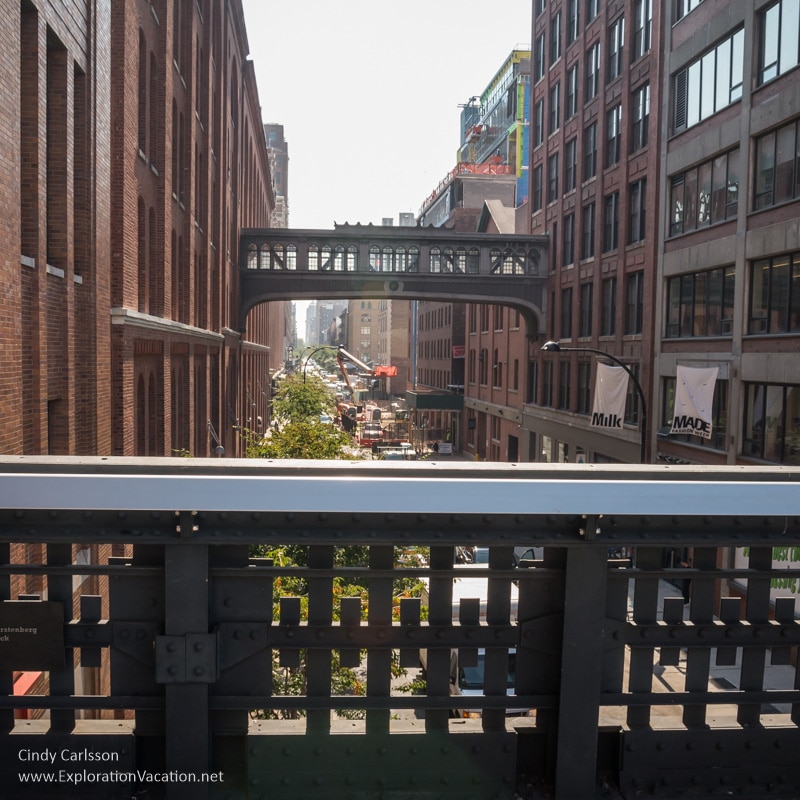 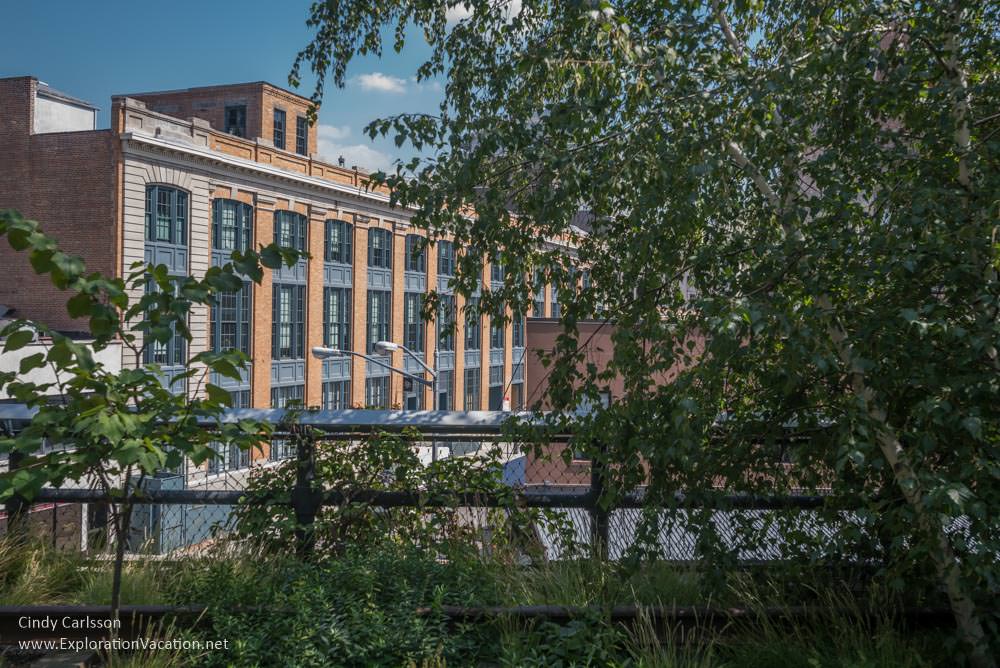 Of course, the only magic involved is that enough people had the vision and will to make this park in the sky a reality!

The character of the High Line and the neighborhood around it changes as you move through the park, but a few things remain consistent: there are plants (many native plants grow in the park), other people (usually lots and lots of other people), places to relax (and a few places to have a snack or a drink), and plenty of reminders of the city past and present. 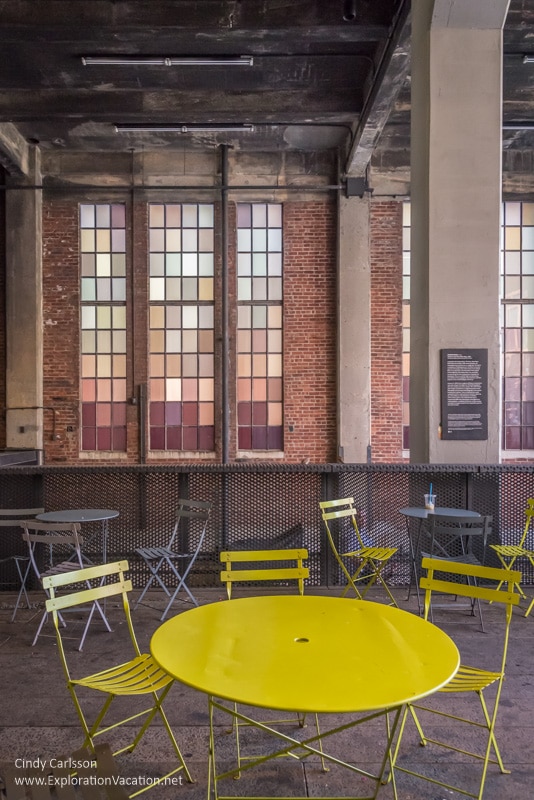 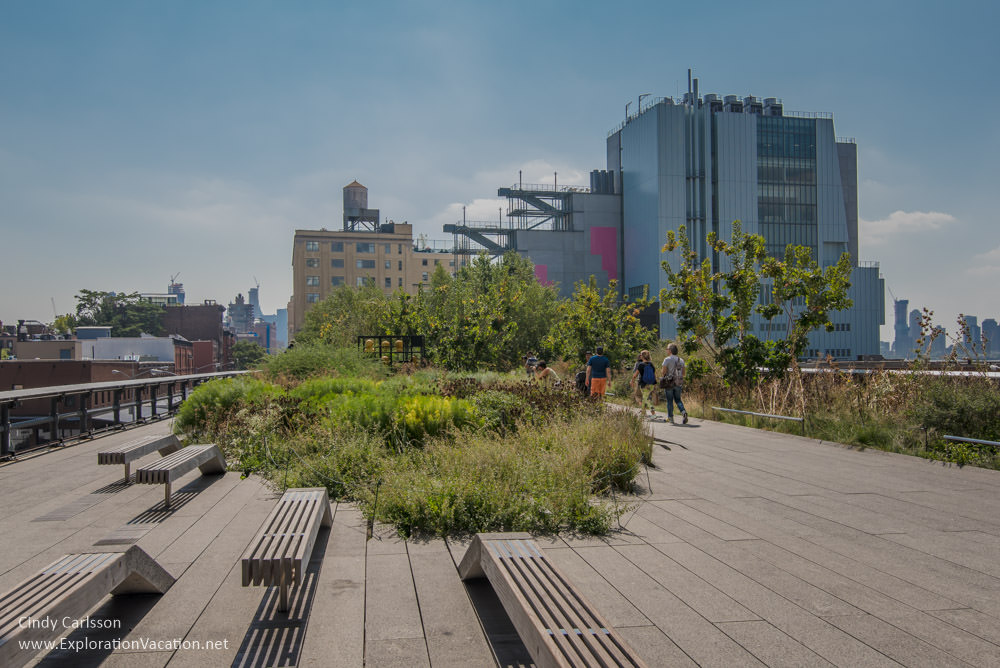 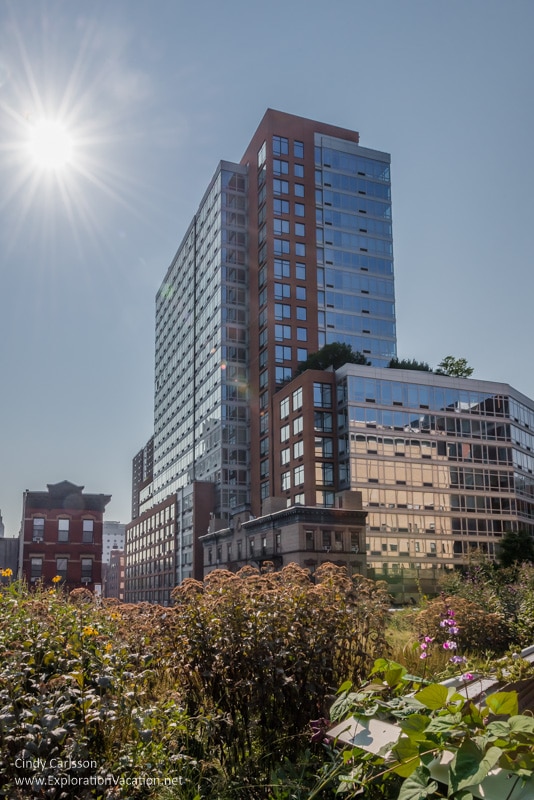 The High Line Park is free and open to the public daily from 7 a.m. into the evening. Specific hours and access information can be found on the Friends of the High Line website. There are a number of restaurants, cafes, galleries, and shops located along and below the park, including the Chelsea Market, the Gansevoort Market, and the Whitney Museum of American Art.

2 thoughts on “Walking the High Line in NYC”

Are you familiar with Rakuten, the online shopping app that gives you cash back when you make a purchase? Did you know you can use Rakuten for travel bookings? Well, you can! END_OF_DOCUMENT_TOKEN_TO_BE_REPLACED