The lovely church of Mission Santa Clara de Asis is the mission’s sixth church and the second at this, the mission’s fifth location.

Here’s a brief summary of the winding path that led to the current church:

The original Mission Santa Clara de Asis was established in January 1777 along the banks of the Guadalupe River. The first mass was held under a tree, but the two priests assigned to the mission didn’t waste any time gathering converts and constructing buildings. By the end of the year the mission included a simple log church and a residence for the priests. There were also corrals, a bridge over the river, and irrigated fields.

January 1779 brought a flood that destroyed the fledgling mission. In response, the priests salvaged what they could and built new wood buildings at a temporary site while searching for a permanent location for the mission.

A new location for the mission was identified in 1781 and work began on a permanent church. This time, however, the church was built to last. After more than two years of labor, the church was completed in 1784. It was a substantial structure, more than 100 feet long and 20 feet high with adobe walls four feet thick at the base. Painted decorations brightened the interior walls. At the time of its completion it was said to be the most beautiful of the California missions, but it seems that no drawings of it still exist.

The church’s cornerstone, including artifacts blessed by Father Serra at the church’s founding, was discovered during street work in 1911. 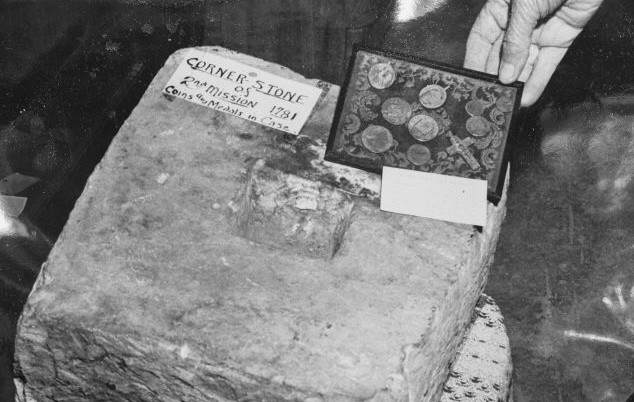 Cornerstone of the second mission church (built in 1781) with artifacts, ca. 1930. Image courtesy of Santa Clara University, and obtained from www.siliconvalleyhistory.org.

A series of earthquakes in 1812 and 1818 resulted in destruction of the 1784 church. In response, a temporary adobe church was built nearby. Although only used as a church until 1825, the building itself remained until it was razed by Santa Clara College in 1867. Over the years it served a variety of purposes, including use as a residence for Indian boys and (much later) as a dance hall.

Construction of the mission’s fifth church began in 1822 as part of a project to develop an entirely new mission compound. The new church was built of adobe with a square bell tower to the left of the entrance. The first worship service was held in the building in 1825.

I’ve been unable to find a period illustration of the church on completion, but Edward Deakin’s 1899 painting is probably a reasonably accurate – if a bit Romanticized – representation of the church in the years immediately following its construction. 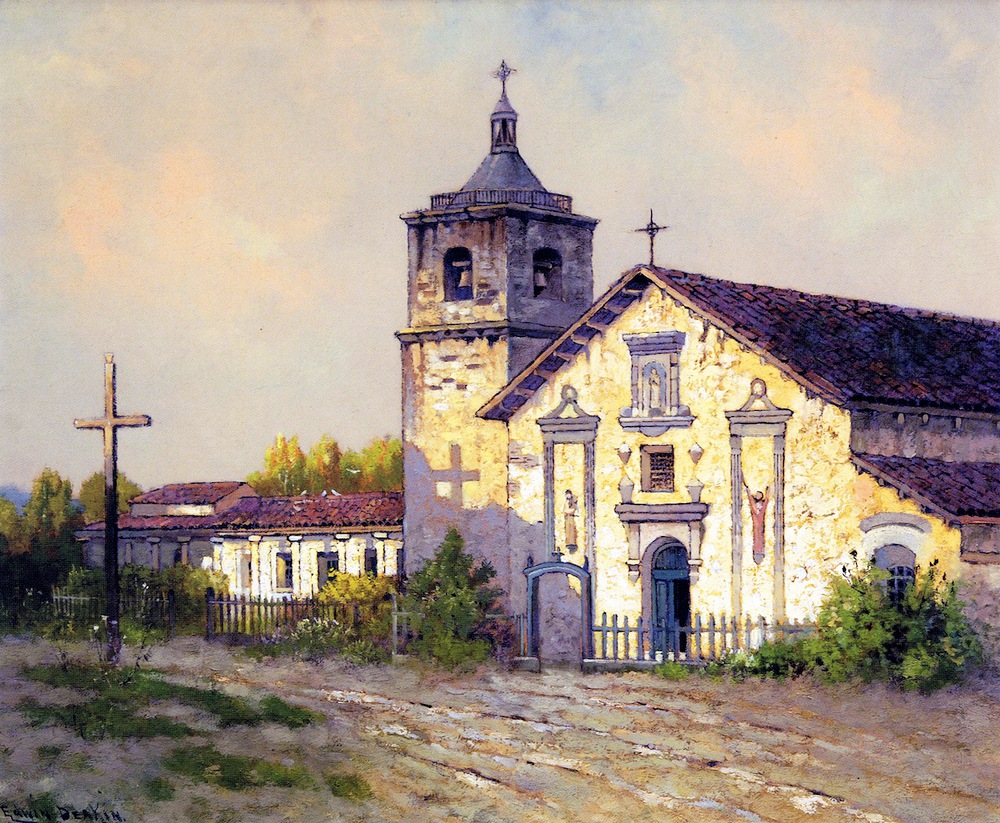 1899 Edward Deakin painting depicting the 1825 church at Mission Santa Clara de Asis as he imagined it looked when constructed.

The church was decorated by Agustín Dávila, a professional artist from Mexico who designed and oversaw the painting. Under his direction the façade was painted to look as though pillars and statues flanked the entrance.

Inside, the redwood ceiling over the sanctuary was painted with angels and saints and the altar featured elaborate paintied reredos. 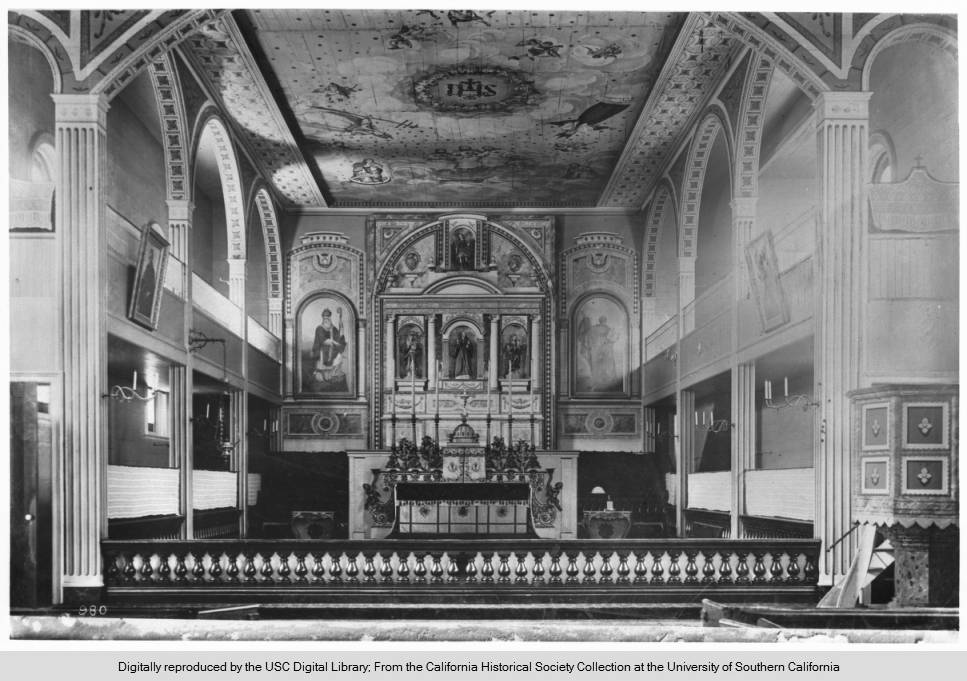 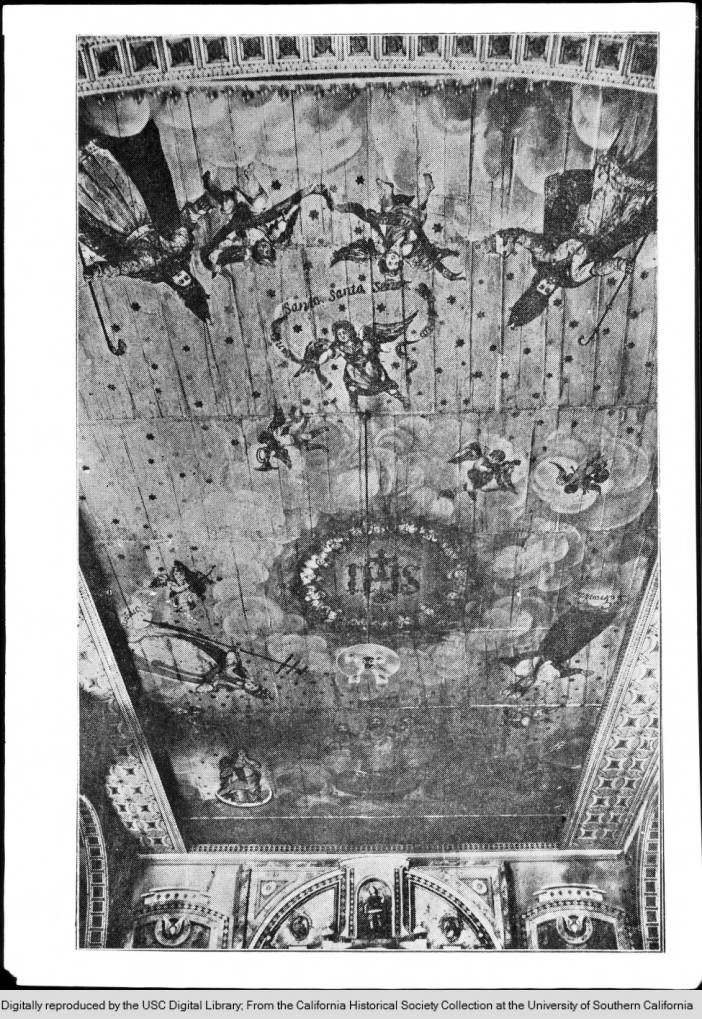 (These pictures were taken around 1900. They show the original ceiling and altar paintings, although the elaborate ceiling above the sanctuary is looking rather worn.)

Church 5 underwent many changes during its hundred years of existence

In 1839 the bell tower, which had been weakened by storms, was replaced with a wooden tower. 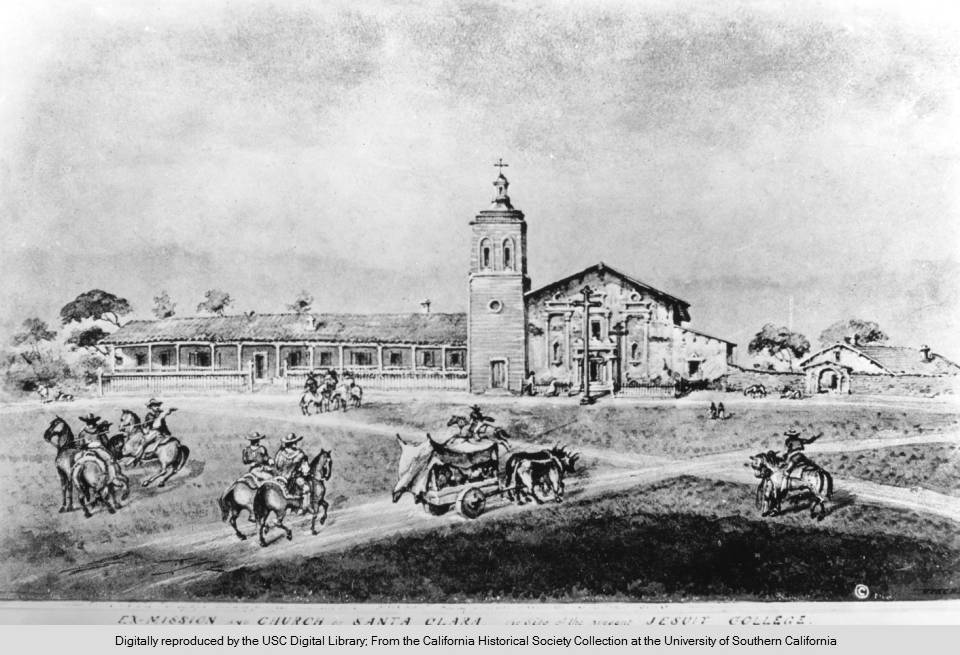 Photograph of a drawing by Edward Vischer depicting a holiday gathering of rancheros at the Mission Santa Clara, 1842-1846. 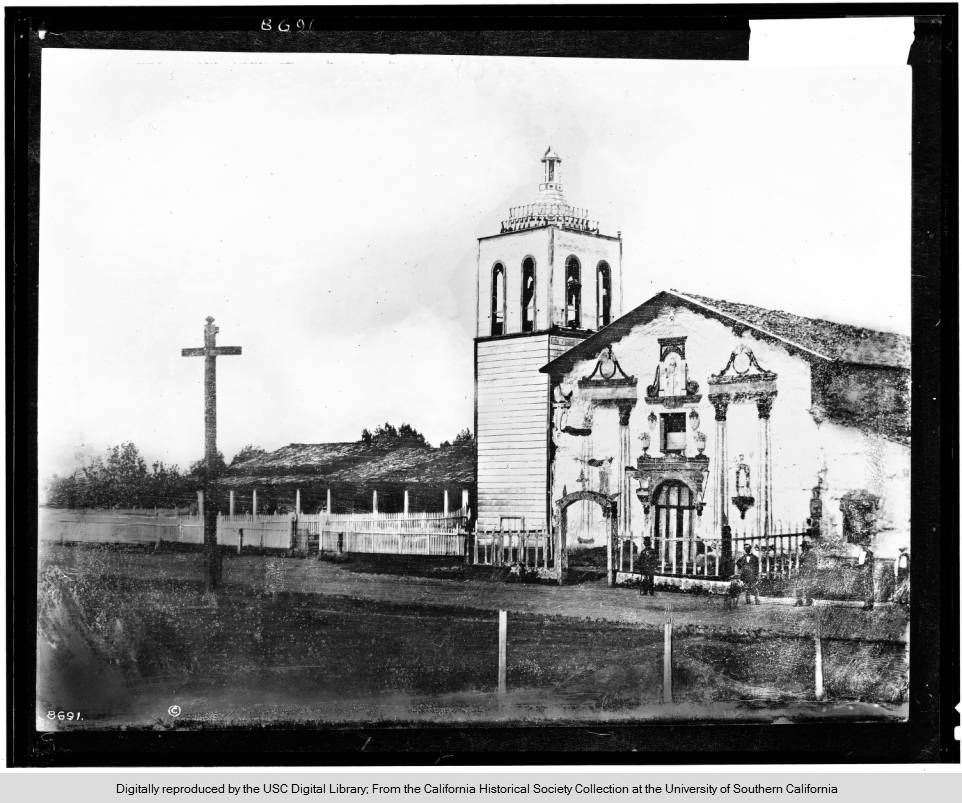 Photograph of the the church of Mission Santa Clara de Asis from the road, copied from a Daguerotype, probably made before 1858 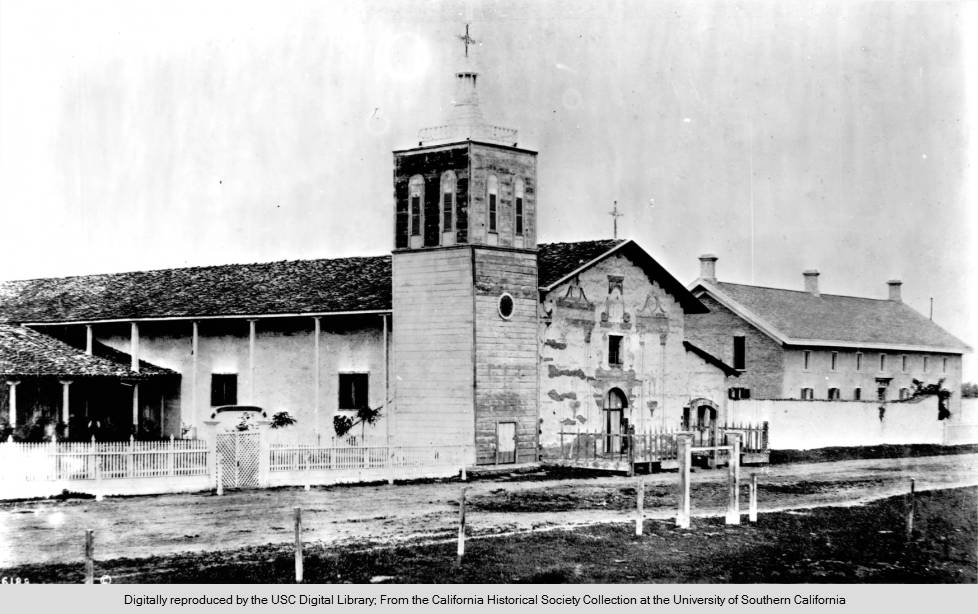 Exterior view of Mission Santa Clara de Asis, circa 1860, from a Daguerreotype by Grant Jackson

(Aside from the addition of the wooden tower, these images show the church’s deterioration over time.)

1861 brought an entirely new façade to the church, complete with a pair of bell towers. This new face was placed over the building’s existing adobe front, completely altering the church’s appearance without changing the structure itself. 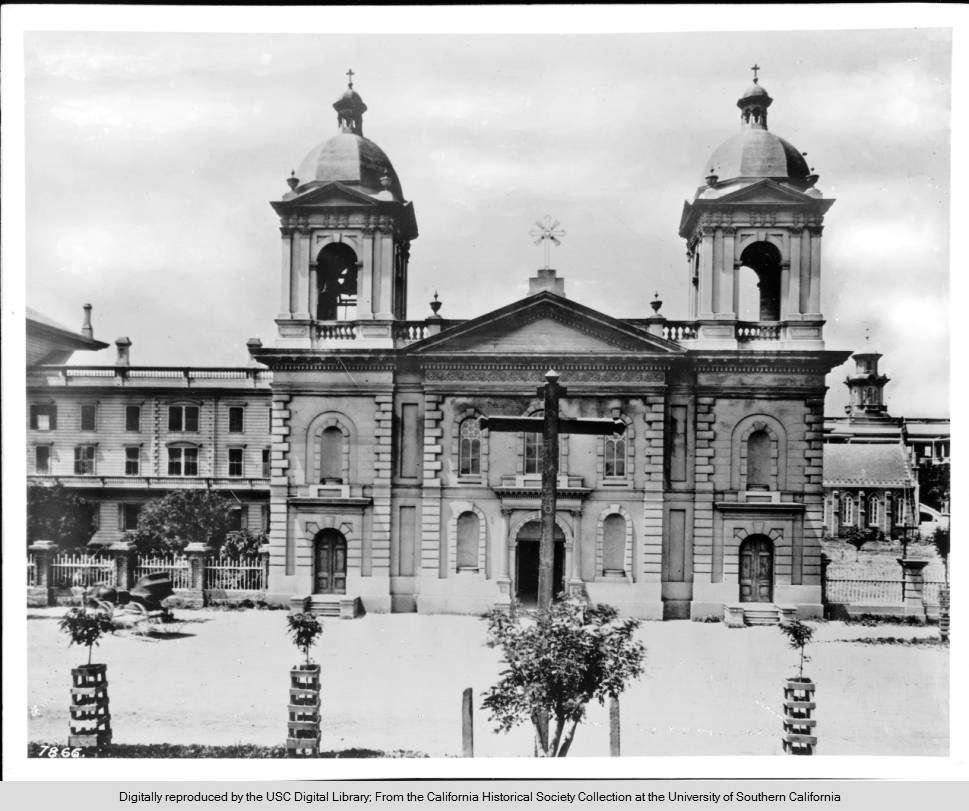 In the 1880s the original adobe walls in the church’s nave were removed and the center of the structure was made wider to provide extra seating. (No, I do not understand how this was done without the whole thing collapsing.) The adobe side walls were then replaced with wooden walls.

While the original exterior of the church had now been completely obliterated, the ceiling and sanctuary area remained intact. 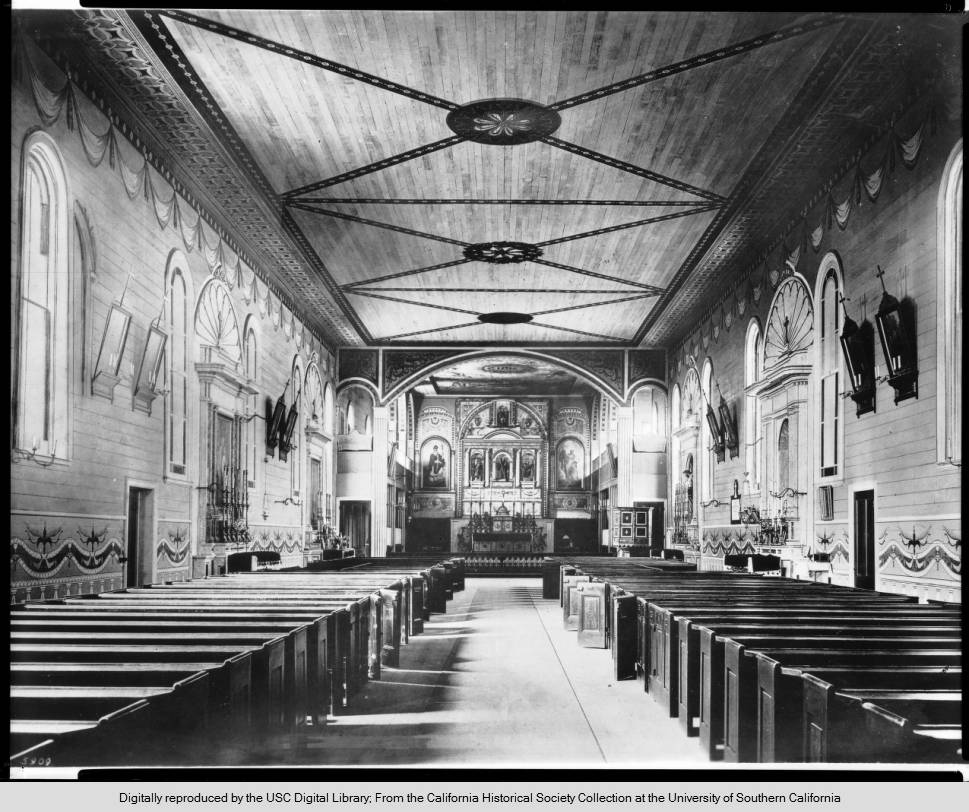 Interior view of Mission Santa Clara, circa 1890, after removal of the adobe side walls were replaced by wooden walls.

The ongoing remodeling of the 1825 church ended abruptly in October 1926, when the entire structure burned in a catastrophic fire caused by faulty wiring. 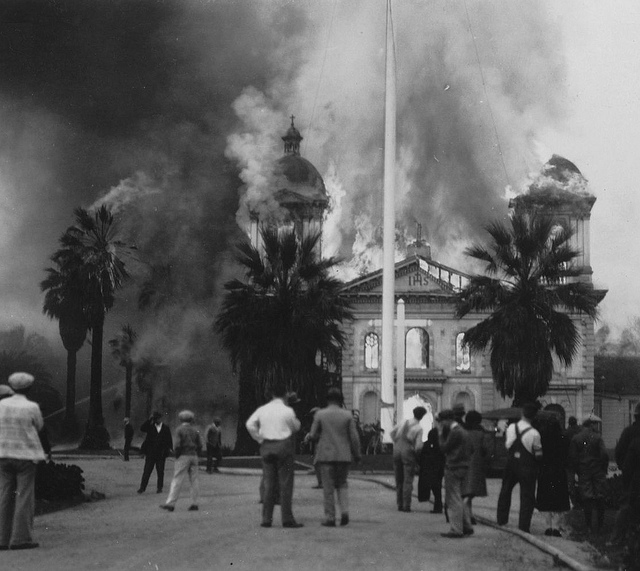 While the students and faculty of Santa Clara University did what they could to save the church and its contents, the fire destroyed the building and all but one wall of the adjoining structure that once housed workshops and the priests’ living quarters. 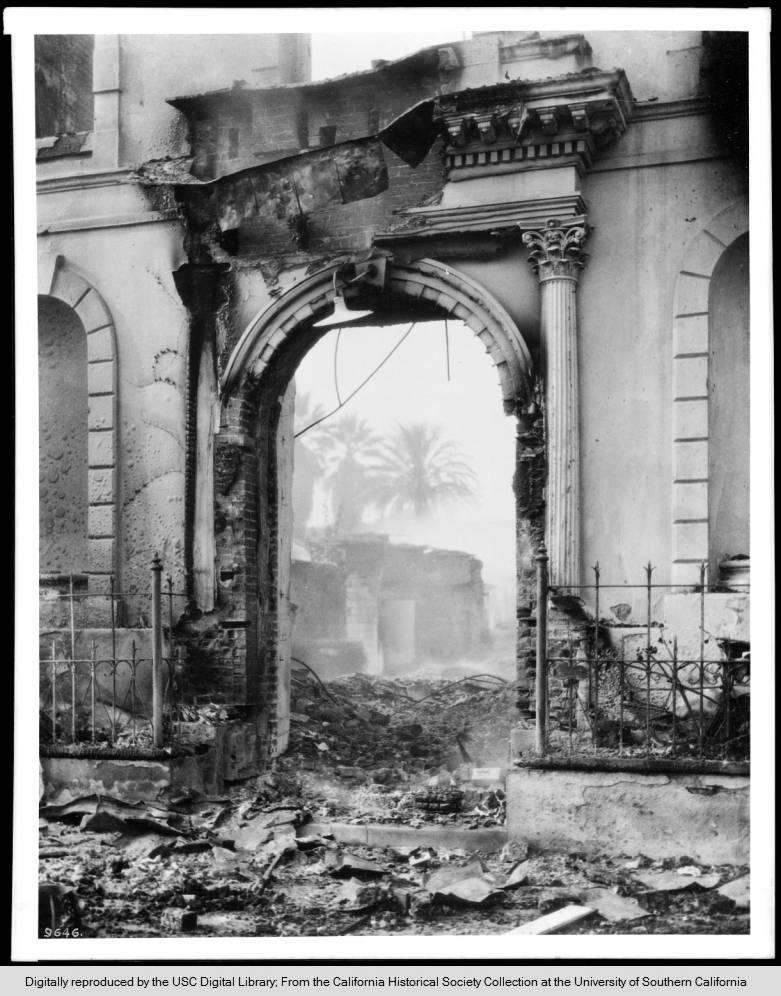 Charred entrance to the church at Mission Santa Clara after the fire of 1926.

A resurgent interest in historical structures in general, and in the mission period in particular, led to the decision to rebuild the church in the style of the original 1825 church. This was more a re-imagining than a reconstruction, or, as I’ve seen it called, “a modern interpretation in stucco and concrete.”

The new church was constructed using concrete instead of adobe and built with a wider footprint than the original to provide space for the extra seating needed to serve the university community. But the structure recalls the 1825 original, with a single bell tower and similar façade (now embellished with carved architectural details and statuary instead of the faux painted ones of the original). Salvaged roof tiles were incorporated into the new building and, inside, Dávila’s painted ceilings and reredos were painstakingly recreated. (Other interior features are less authentic, including the confessionals built into the sides of the nave.) The few adobe walls that survived the fire were restored and the bell tower’s four bells include one of the original bells rescued from the fire. Pieces of the mission’s original 1777 cross are preserved near the entrance and the old cemetery is preserved as a rose garden. And, as I suspected, some of the plants on the grounds have been here since the early days of the mission’s relocation to this site.

It’s enough to provide a connection to the past, even if it is a largely imagined connection. 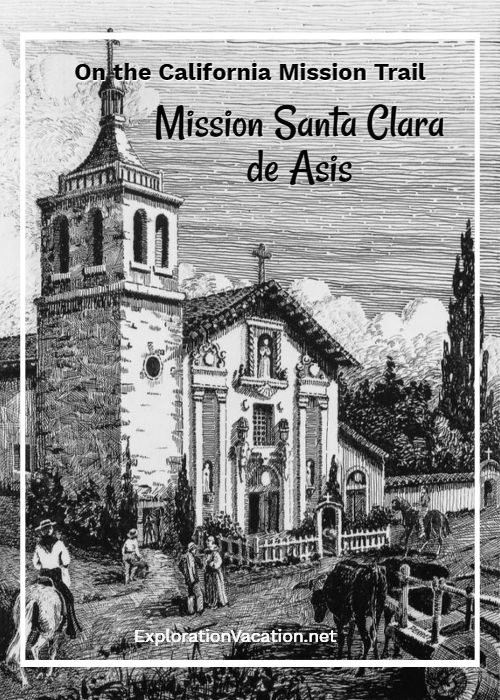 Are you familiar with Rakuten, the online shopping app that gives you cash back when you make a purchase? Did you know you can use Rakuten for travel bookings? Well, you can! END_OF_DOCUMENT_TOKEN_TO_BE_REPLACED