Fès has been famous for its fine leatherwork for 1000 years. Even today the medina features locally-made leather items. Most prominent of these may be the gaily-colored babooshes – the pointed toe, open heel shoes that are still worn by both men and women in Morocco.

While the colorful shoes are cheerful and fun, creating them begins with the laborious and largely unpleasant process of preparing the leather. Called tanning, this is one of the ancient crafts of Fès, and tanneries are still found in the medina.

Even though you probably won’t see it, you will know when you are near a tannery. Even today, the tanning process used here uses pungent ingredients that include animal urine and pigeon droppings. You will smell a tannery long before you reach it.

The Chouara tannery is claimed to be the oldest in the world, dating back to the 11th century, and some of the vats here have been used for hundreds of years. Located in the medina, visitors can observe the process from upper level terraces that look out over the pits where the tanning and dying is done. The terraces are at the back of the leather shops, so any visit begins in the entryway of a tourist shop where you will be greeted by someone offering sprigs of mint. 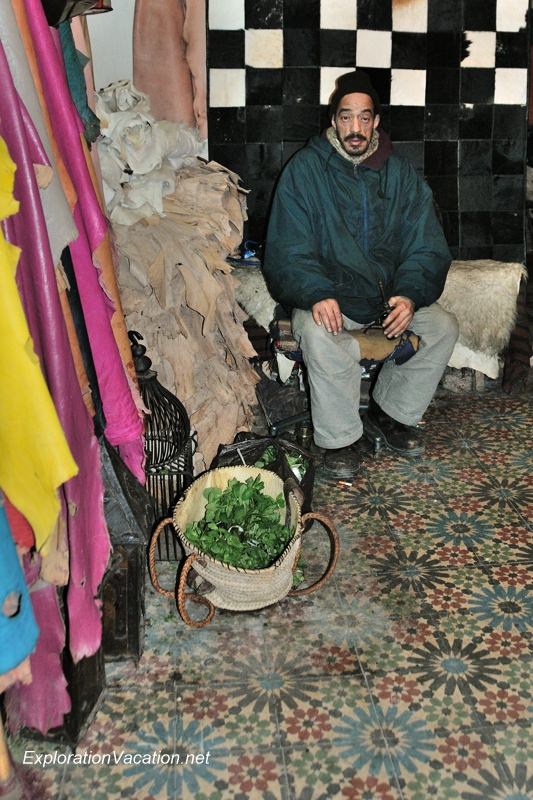 Take one and then head up the stairs as directed.

Once you have reached the shop’s main display area, you need to walk through the shop to the open terraces that line the back of the shop above the dying pits. (Don’t worry, you can come back and buy all the leather goods you want later) While rather odoriferous (hold the mint sprig under your nose or maybe just enjoy a smoke), you now have a great view of the process. 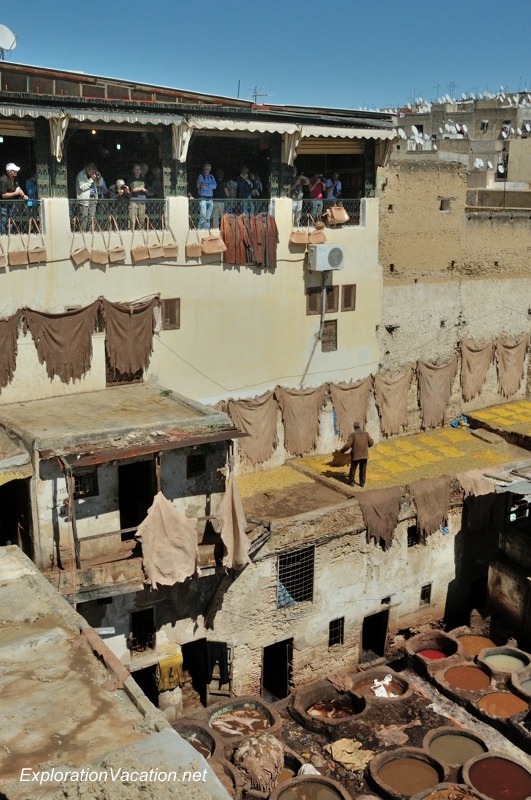 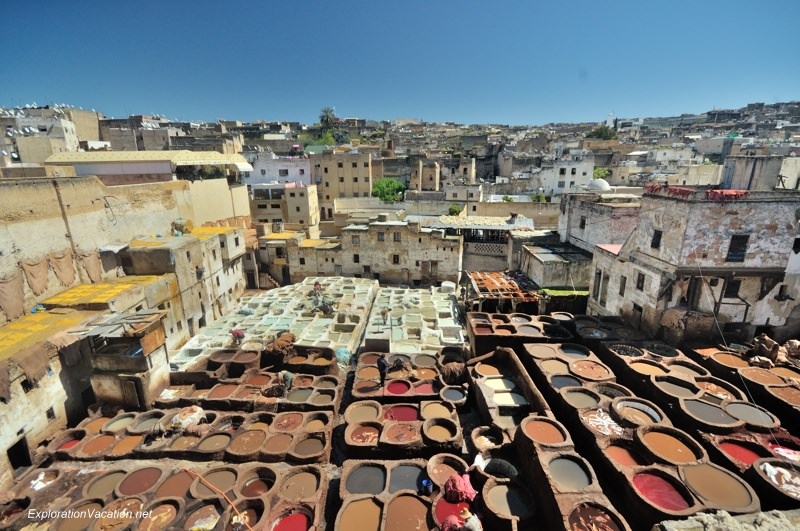 While the scene is dominated by the dye pits, the whole process is occurring under your nose, beginning with the delivery of the hides via fleets of overburdened-looking donkeys. 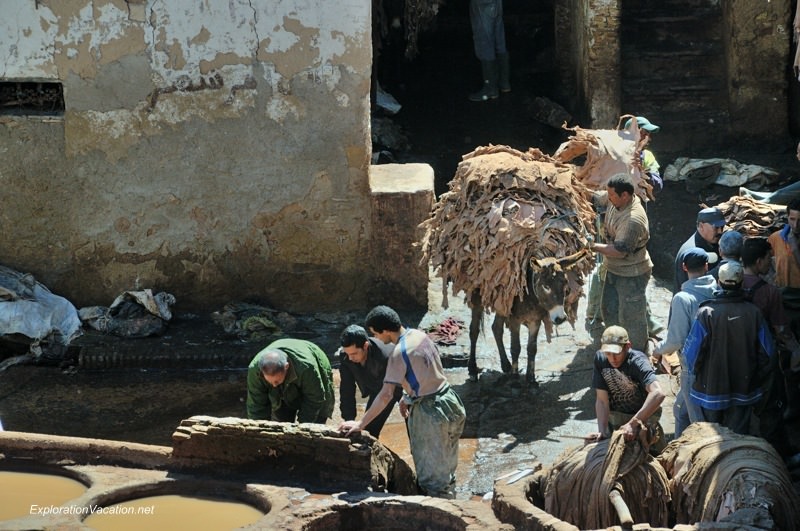 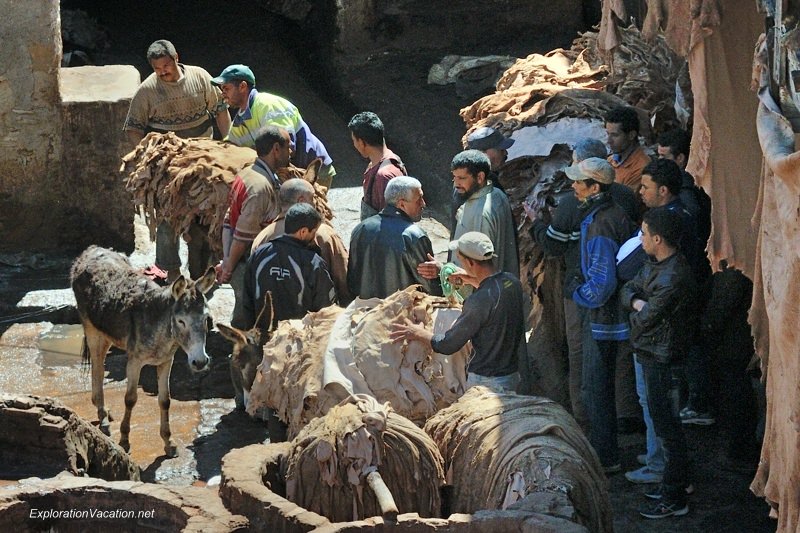 The hides are unloaded from the donkeys. Some of the hides being delivered appeared to already have undergone some processing and may have been headed straight to vats for softening or dying. When fresh hides arrive, they are sorted and soaked in a mix of cow urine, quicklime, water, and salt for a few days to remove remaining fat, flesh, and hair. They are then scraped clean and spread out on rooftops to dry. Once dry, the hides are collected and brought back down to the vats. 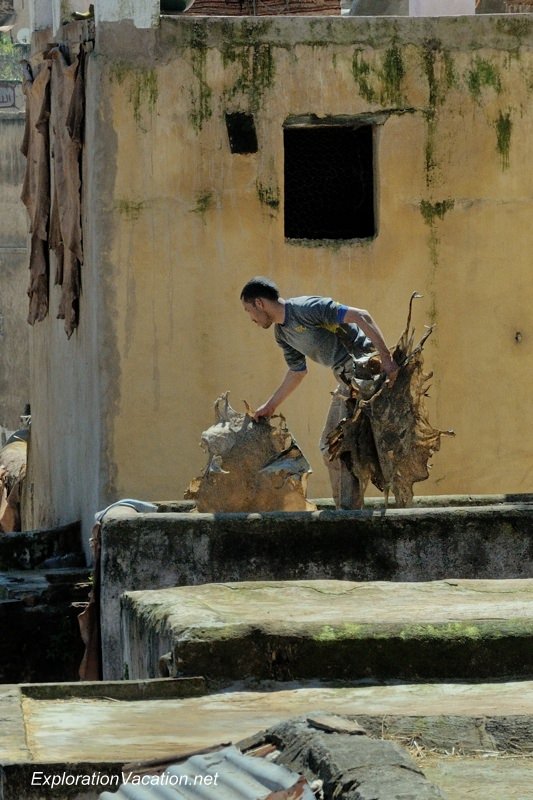 The next step involves soaking the hides in vats of pigeon droppings and water to soften them. 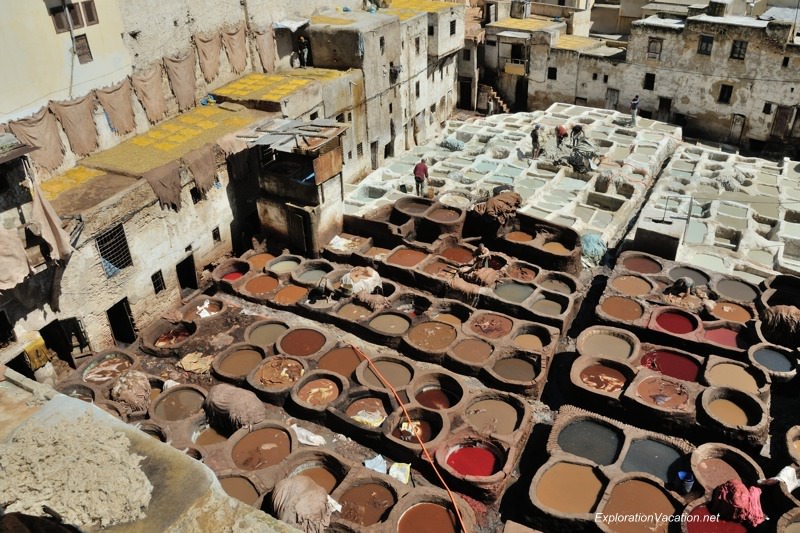 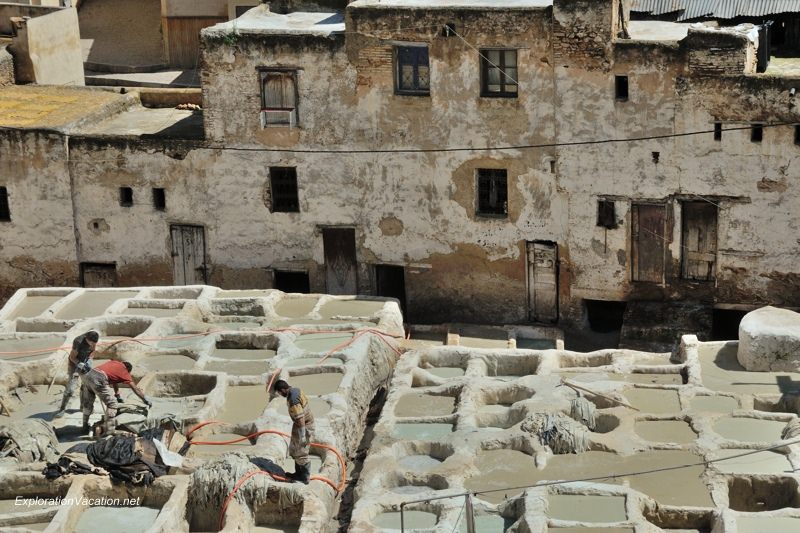 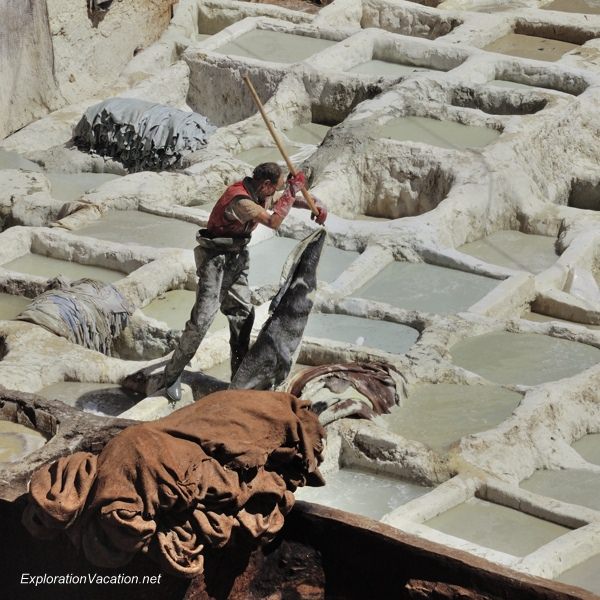 To complete the softening process, the tanners use their feet to knead the hides until they are soft.

Once the hides are softened, they are moved into the dye vats. While commercial dyes are commonly used in other tanneries, the Chouara tannery claims to use only natural dyes. To achieve full color using these dyes, the hides usually soak in the dye for a week. None of this is easy work and, like the other workers, the dyers work inside the vats – many wear modern waders, but even they wear the colors of the dyes they are using. 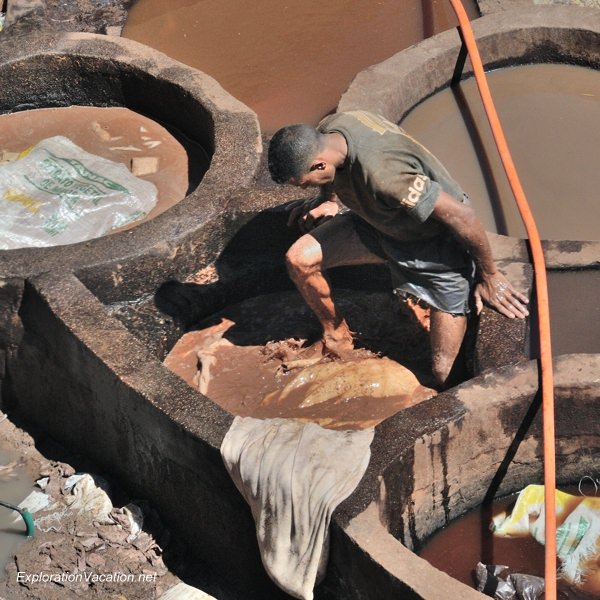 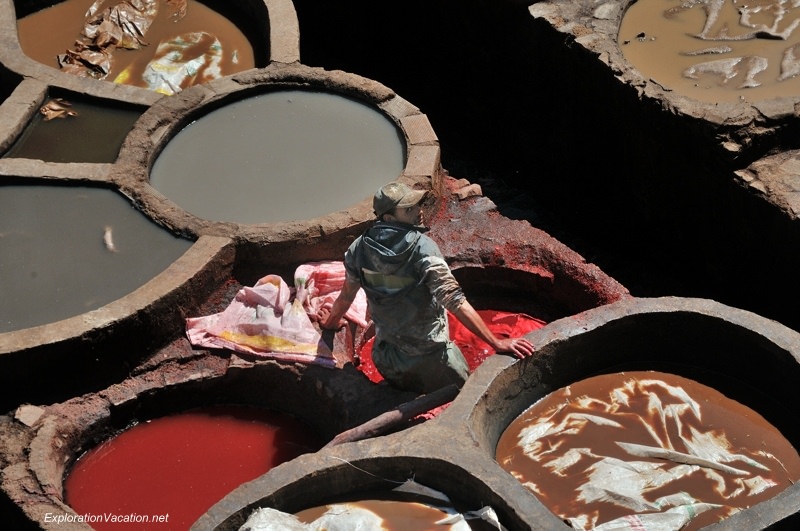 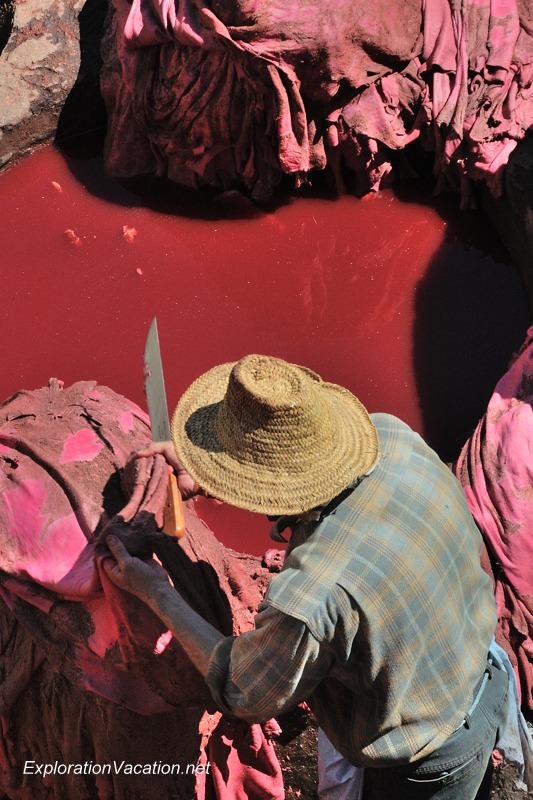 Once they have reached the desired colors, the hides are removed from the dye and dried – some are stretched on frames within the tannery, but many can be seen drying on roof tops across the medina and in the cemetery along the city wall.

Once you’ve seen what goes into simply preparing the leather, it’s a little easier to stomach the prices you’ll be charged (even after bargaining) to buy something in the shop. These items are the result of hard, unpleasant work.

Tours of the medina in Fès generally include a visit to a leather shop to view a tannery. How offensive you find the smell will depend on the weather and your own sensitivity. While it wasn’t pleasant, I didn’t find it unbearable and spent a considerable amount of time hanging over the terrace railing watching and taking pictures.

A couple of websites have detailed accounts of the tanning and dying process:

Tannery Kid, a short National Geographic video on YouTube, emphasizes everything disgusting in the first stages of the tanning process. There is plenty that is both disgusting and unhealthy for the workers, but the video also notes that the young tanner’s friends think he has the better job.

Despite the unpleasant and difficult work, many people rely on the tanneries for their livelihood. Fès is home to nearly 60 tanneries, nearly all of which are “modern” facilities located in industrial areas of the city. While these allow for the production of leather much more quickly and provide more sanitary conditions for workers, they also rely on chemicals that are far more toxic than those used at Chouara. Proposals to move the three remaining traditional tanneries out of the medina and into modern facilities in an industrial area have been opposed by many of the tannery workers.

2 thoughts on “The Tannery, Fès, Morocco”

Are you familiar with Rakuten, the online shopping app that gives you cash back when you make a purchase? Did you know you can use Rakuten for travel bookings? Well, you can! END_OF_DOCUMENT_TOKEN_TO_BE_REPLACED