Once you leave the modern divided highway that serves the airport, all of Mahé’s roads seem to be narrow, with sheer edges that drop off a few inches (or many, many feet) into a ditch (or off a cliff). The mountain roads go one up on this by also being extremely steep and turn back upon themselves in the tightest hairpin curves I’ve ever seen. 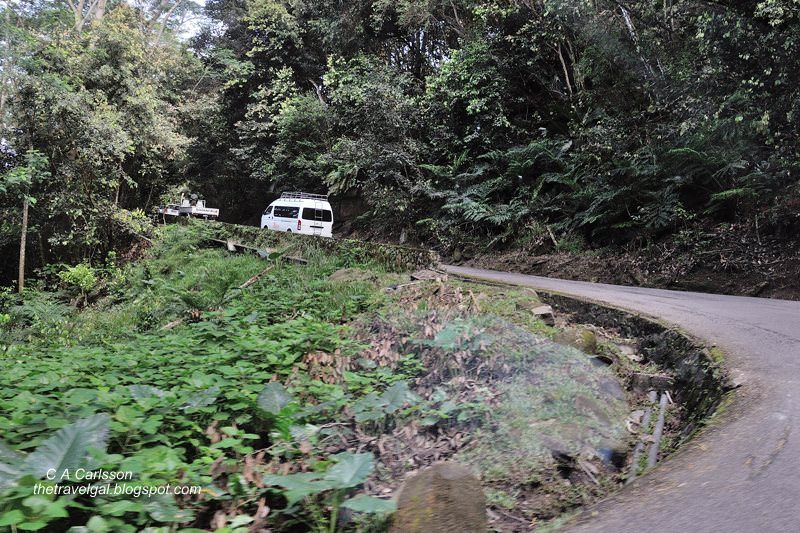 I’m sure the guidebooks for the Seychelles clearly state that one should never, under any condition, drive on Mahé at night (or maybe at all). If not, it is only because the idea of a tourist (especially one used to driving on the “other” side of the road) driving at night is so preposterous that a warning seems superfluous.

Of course, I could have guessed that would be the case without a guidebook telling me so. But I really, really wanted to spend a day with our friends before they flew out, so I chose to ignore the fact that this would require driving them to the airport in the dark. After all, our hotel is just across the island from the airport – how bad could it be?

Actually, the headlights are the real surprise. Who would have guessed that headlights are completely useless when rounding a hairpin curve on a grade – which describes almost the entire route between the airport and our hotel – where high-beams are needed at the top of the curve and low-beams at the bottom. Since the curve is tight, there really isn’t time to switch back and forth. (Plus, it is hard to keep switching your headlights while making a tight turns on a poorly graded road, even at low speeds.) We would have had better visibility if I could have held a flashlight out the window.

Given all that, I shouldn’t be surprised by an odd lurch accompanied by a frightful grating sound – the sound of metal scraping pavement, a sound that stopped as the car stopped.

Lane hops out of the car onto the roadway on the driver’s side. I am a bit more cautious, not entirely sure there will even be ground to step out onto; for all I can tell, we could be suspended over the edge of a cliff. I am pleasantly surprised to discover several feet of solid earth available (and trees beyond) on my side of the road.

Both wheels on the passenger side of the car have dropped off the pavement, but at a point where the stone “ditch” is almost exactly the same height as the shock absorbers. While the situation is inconvenient, it is far from disastrous. After all, this could have been at a spot where the “ditch” is twenty feet below us, not a measly six or eight inches.  Still I’m glad we paid for the comprehensive coverage. Now, I wonder if they have AAA in the Seychelles.

Lane had been attempting to let a motorcycle pass when we slipped off the pavement. Now the motorcyclist has joined us in staring balefully at the car. He’s the first to take action, picking up a few small rocks and building a little pile of stones near the front tire. He doesn’t seem convinced that using the stones to drive back up on the pavement will actually work (nor do there seem to be enough stones around), but it’s what we’ve got.

This could take a while.

Do they have tow trucks in the Seychelles?

Another vehicle comes by and stops. A couple more young men get out and join us in staring at the car and the small pile of stones. Everyone agrees this is a bummer, but no one knows what to do.

This seems odd, as this has to be a common occurrence, given the roads here. Besides, it looks pretty obvious to me:  There doesn’t appear to be any damage to the car, so all we need to do is get it back on the pavement. If this were my Miata, we could just pick it up and put it there. Unfortunately, this car is a lot bigger and I can’t see the five of us picking it up and moving it anywhere.

We stand around the car in the warm tropical air, all of us staring quietly at the car as if it will suddenly move itself back onto the pavement as we watch. I wonder again if they have tow-trucks here.

Another vehicle passes, continues a bit, then backs up and stops next to us. The driver is a fit middle-aged man. He sizes up the situation immediately: “You need those wheels back on the pavement.”

He circles around to the rear of the car and turns to the younger men. “We’ll start back here because it’s lighter.” Without further direction or comment, everyone moves to the back of the car. He directs the group: “When I give the word, lift.”

It’s close, but not quite enough. He rearranges the group a bit, tells us to try harder this time.

Success! Both rear wheels are now on the pavement.

The front end also takes two tries, but soon all four wheels are (just barely) back on the pavement. Everyone congratulates each other and we shake hands all around. The older man is the last to leave, waiting until we have driven the car away from the edge of the road before wishing us well and advising that we “stay on the road.” Which we do.

Our hero “hijacked” us (his words) farther down the road, stopping us to give us his name and phone number in case there was anything else we needed during our stay. Thank you, Yam, for rescuing us!

Are you familiar with Rakuten, the online shopping app that gives you cash back when you make a purchase? Did you know you can use Rakuten for travel bookings? Well, you can! END_OF_DOCUMENT_TOKEN_TO_BE_REPLACED