It seems that we end up walking past nearby McPherson Square several times each day.

Not only does it face the wonderful Georgia Brown’s restaurant and host the nearest transit stop, but it just seems to be along the way wherever we are going.

But the square itself is awash with the tarps and tents of Occupy DC. 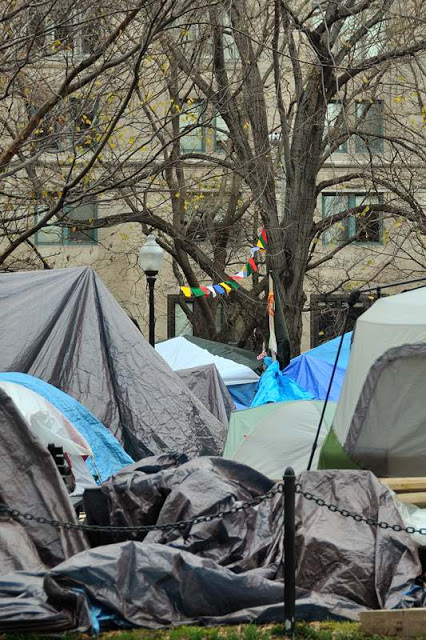 Although it has the look and feel of a long-abandoned campground, we do sometimes see people around and the scene itself changes subtly throughout the day. In the chilly morning air the square seems lifeless, almost completely swathed in tarps that drape over tents individually and as groups. As the day goes on, many of the tarps come down and a few people emerge from the tents or wander in from the street. By evening the camp is mostly dark, but voices float out to the street and some nights an amplifier sends out the sounds of a guitar or singing. The area feels more occupied – more like a campground – at night, but, even with a generator, it does not look like a pleasant place to spend a DC winter.

In the days before we arrived in DC, tension had increased at the camp due to an influx of protesters from other cities, attempted construction in the park, traffic disruptions, and clashes with police.

Now, despite the ragged appearance, things seem orderly and subject to rules. The Park Service has posted regulations and the occupiers themselves have developed de-escalation guidelines.

It feels as if the group’s goal is simply to maintain a persistent presence (“don’t forget we exist”), rather than attack the existing social order.

At least for now.