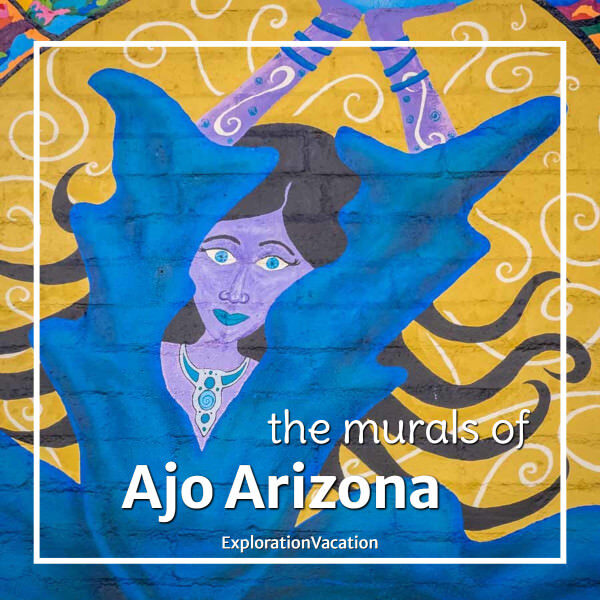 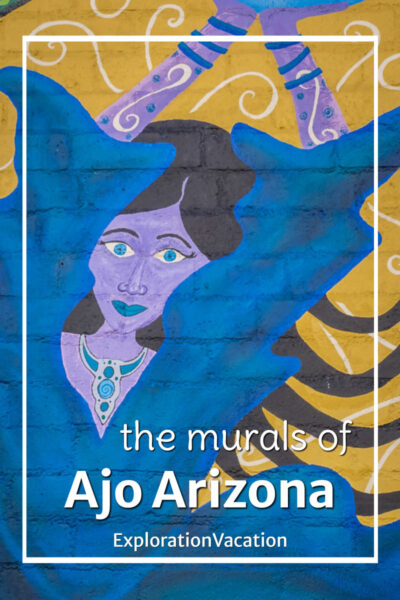 The exuberant street art in Ajo, Arizona, is a bold and colorful sign of this old mining town’s artistic rebirth. 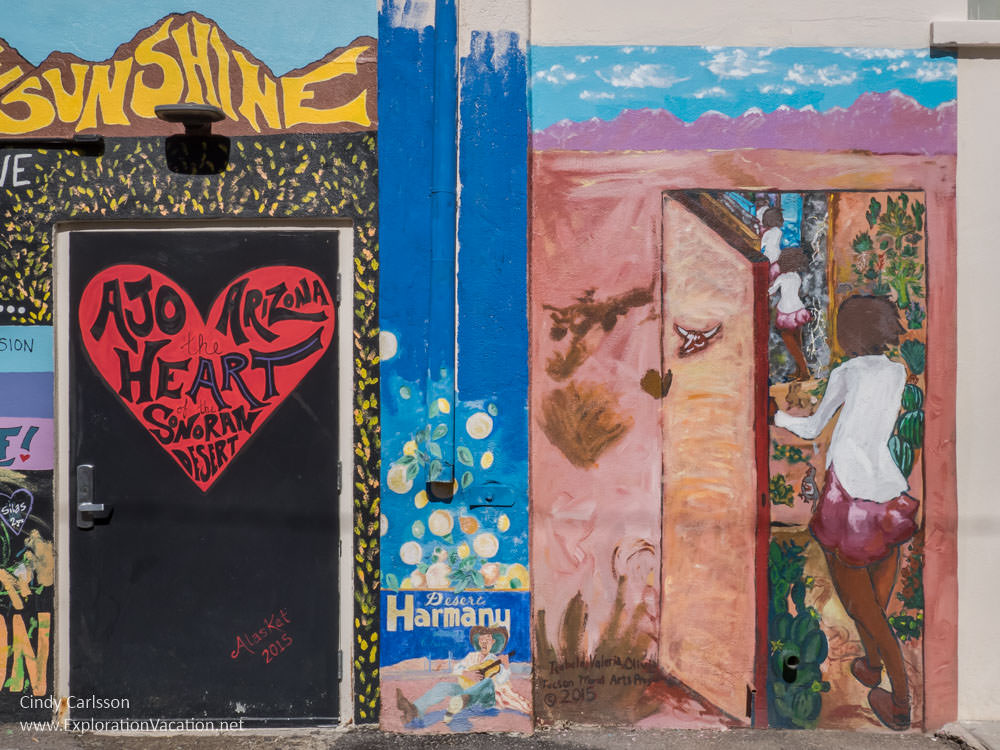 I provide links as a convenience to you. However, some may be affiliate links that pay me a small commission if you use them to reserve a room, rent a car, or purchase goods or services. You don’t pay anything extra, but it helps keep this website running. And all affiliate links are for products or services I personally use and recommend. To learn more, review this website’s policies and disclosures.

Lively street art in the heart of Ajo

Arizona’s southern borderland can seem like a desolate place, but a group of artists and community activists in Ajo are proving that art can thrive in this often overlooked region of the Sonoran Desert.

Visitors driving through Ajo, Arizona, on their way to Organ Pipe Cactus National Monument might not notice the beautiful Spanish Colonial plaza that forms the heart of downtown. However, they are unlikely to miss the town’s street art. 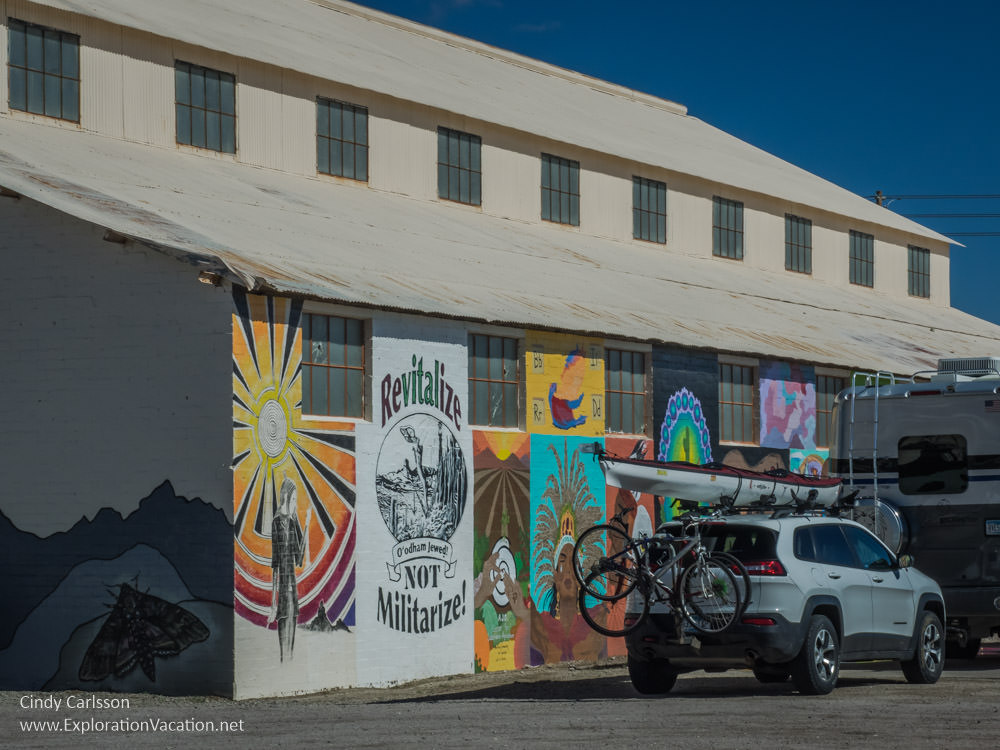 Ajo’s murals cover the walls of several buildings located just off the main plaza where many are clearly visible from the highway. 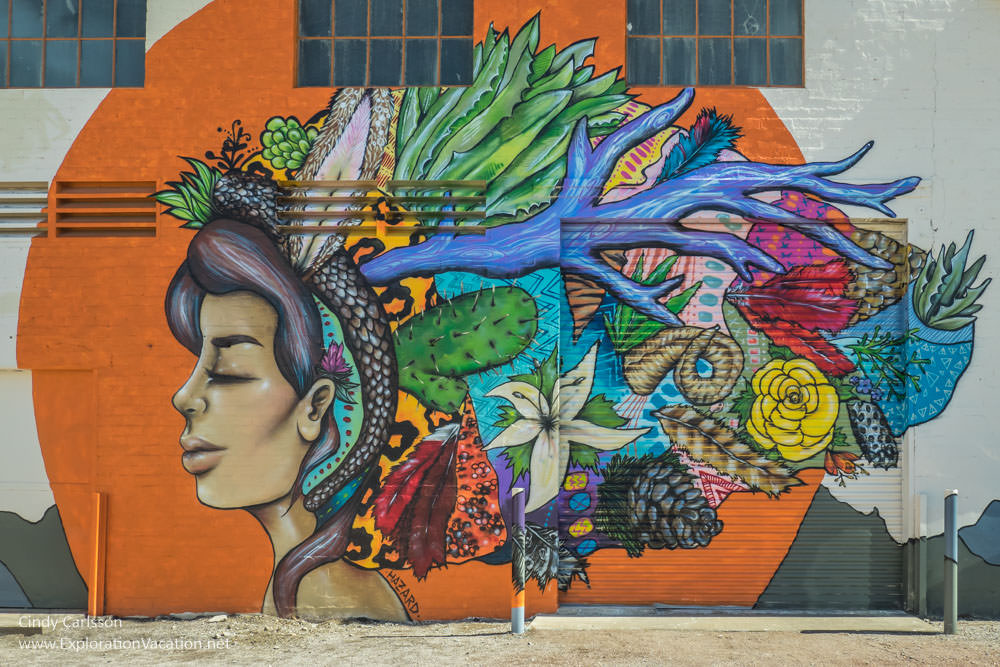 There’s nothing timid about these murals. They are big and bold. Many are bright colors. And many carry messages about life along the border. 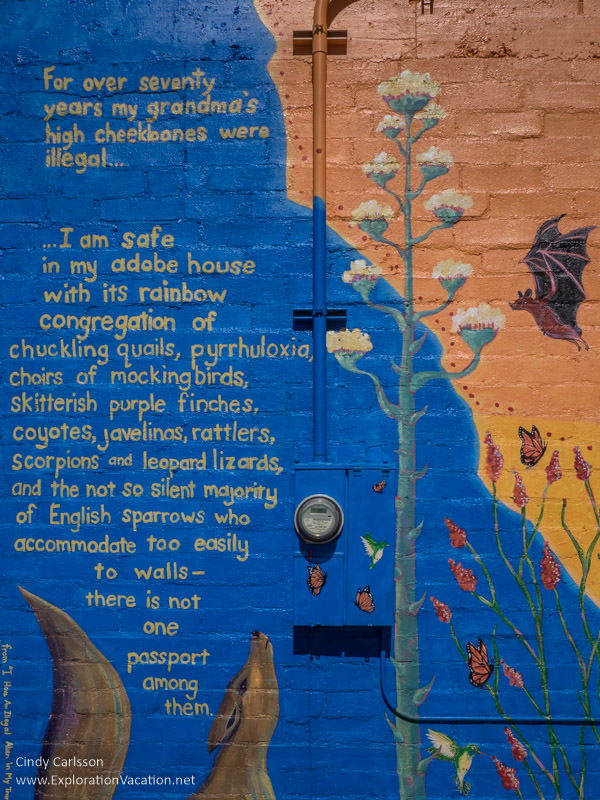 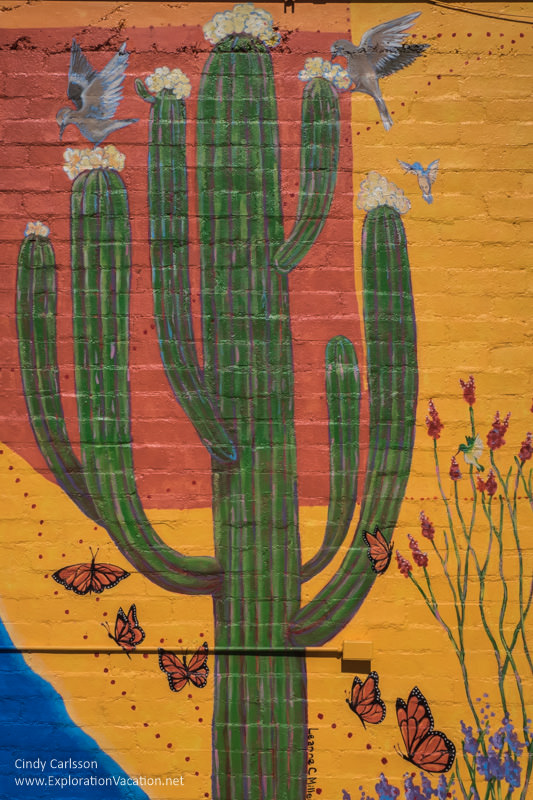 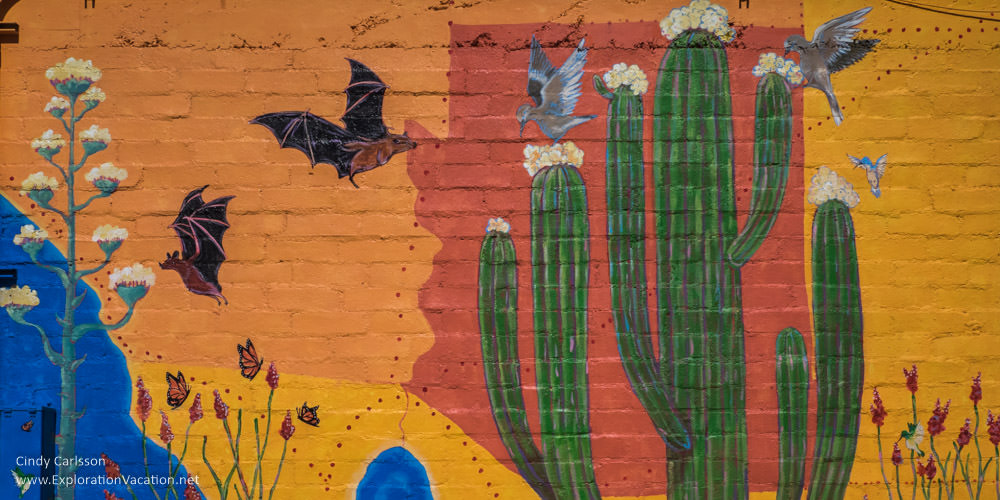 (“Wild in the Plaza of Memory” by Leanne C Miller takes its theme from Pamela Uschuk’s poem “I have an Illegal Alien in My Trunk”.) 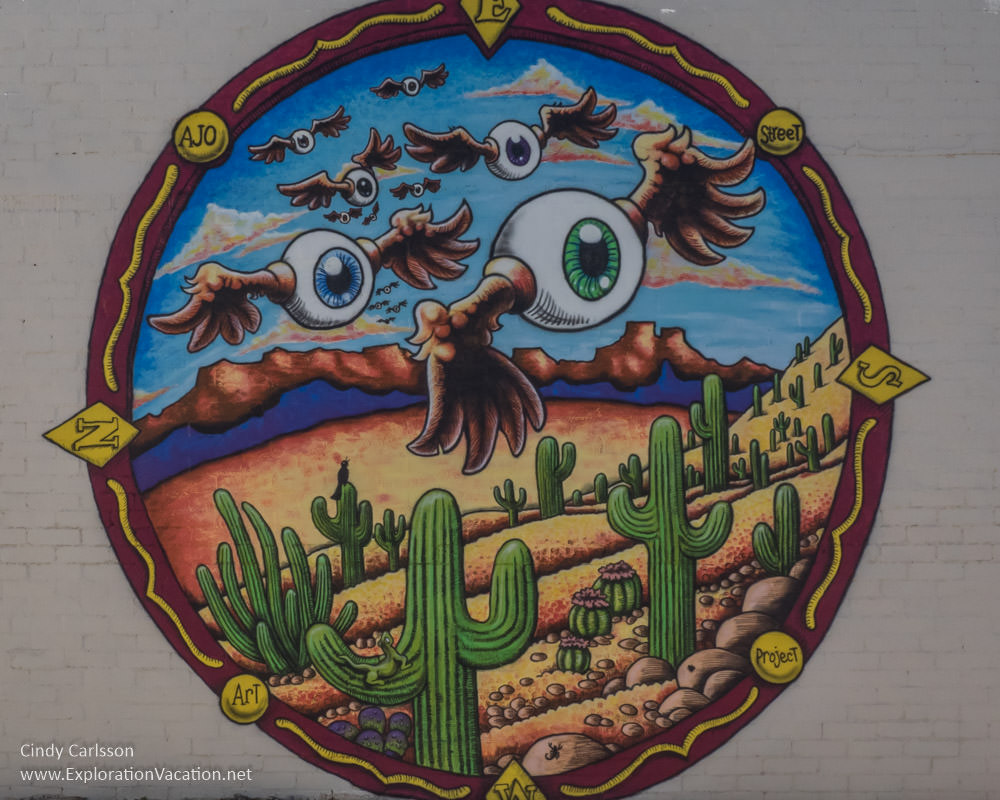 Ajo’s re-birth as an art community

The murals that entice drivers to take a break in Ajo didn’t appear by accident. They are part of a plan to turn a dying mining community into a thriving center for the arts.

The past is past

For generations, Ajo, Arizona, was defined by its enormous copper mine.

The New Cornelia mine not only provided the economic basis for the town, but most of the town itself in the form of a downtown plaza and worker housing built and owned by the mine.

Without the mine, Ajo was all but abandoned by residents who could afford to move elsewhere in search of jobs.

But abandoned housing is cheap housing. Soon snowbirds and artists seeking warm winters and an inexpensive place to live drifted into the area. Most started out living in RVs or other seasonal housing. However, over time, they began to settle permanently alongside the town’s remaining Mexican-American and Tohono O’odham communities.

Art as a path to the future

With all these artists in Ajo, a few folks started thinking that maybe the arts could be used to build a sustainable economic base for the town. To make that happen, they formed the non-profit International Sonoran Desert Alliance.

The ISDA purchased the plaza and the historic Curley School. They renovated the mostly abandoned plaza and rented the space out to local businesses, art galleries, a café, and organizations like the local library and Chamber of Commerce. The historic school became artist housing, art workshops, and a small hotel.

With plenty of artists and art to sell, the focus then turned to getting visitors into town to buy art.

This is where Ajo’s traffic-stopping street art enters the story.

Murals to the rescue

Although a few murals showed up in Ajo earlier (it is a town filled with artists, after all), the first big painting project was in 2015.

The 2015 Ajo Street Art Project brought local and regional artists together to create murals. The event was designed to bring the diverse community together around art and leave the community with eye-catching street art that would also draw visitors – and their wallets – into Ajo. To do this, the artists worked in collaboration with local Mexican, American, and Tohono O’odham residents to ensure the murals reflected community values and concerns. And then everyone set to work painting.

A second event in 2017 was a more ad hoc affair, but drew an even more far-flung group of artists (including Miss Hazard, who made her way here from Spain) and resulted in more murals. The most recent event was held in 2019.

Although street art can be found throughout Ajo, the greatest concentration of murals is just past the plaza in and around Artist Alley. 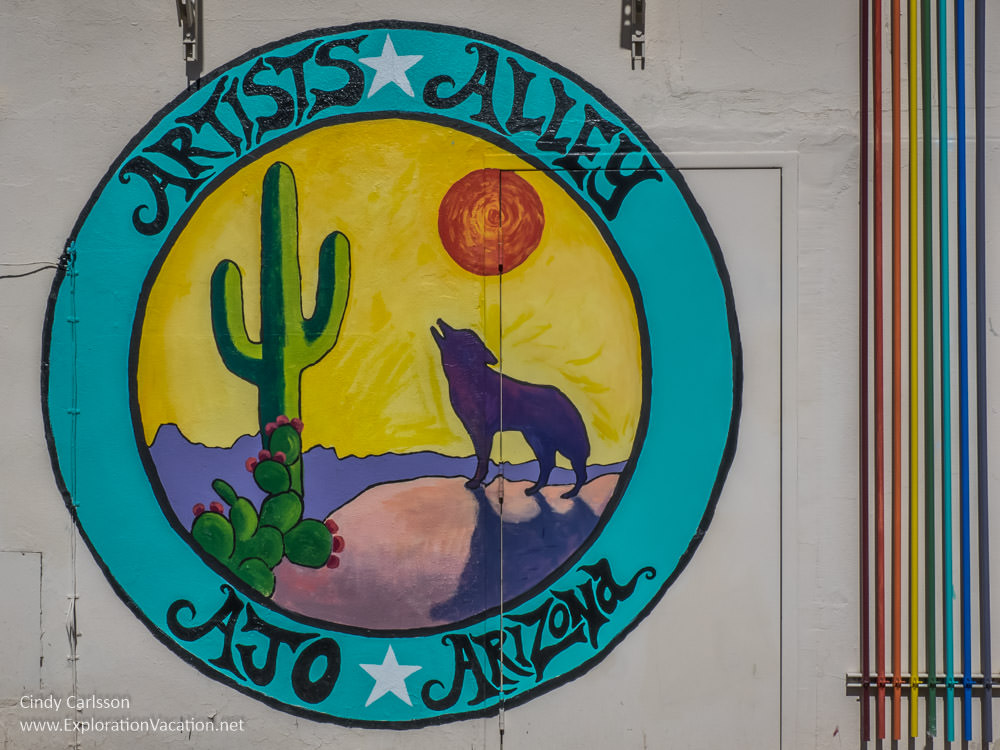 The alley is filled with bold, often big, paintings. While a few are simply beautiful or whimsical, many tackle issues central to life here. 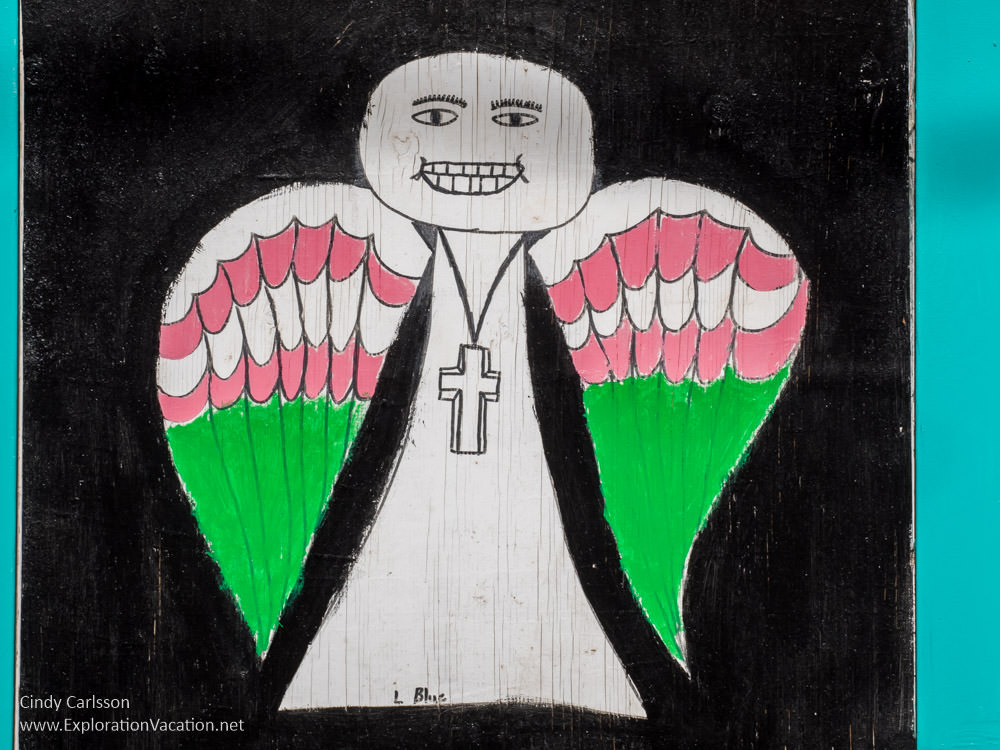 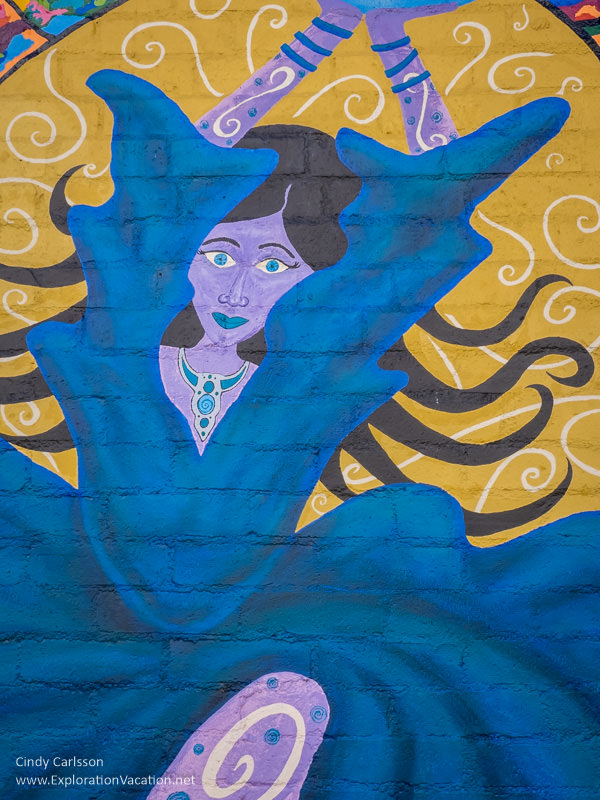 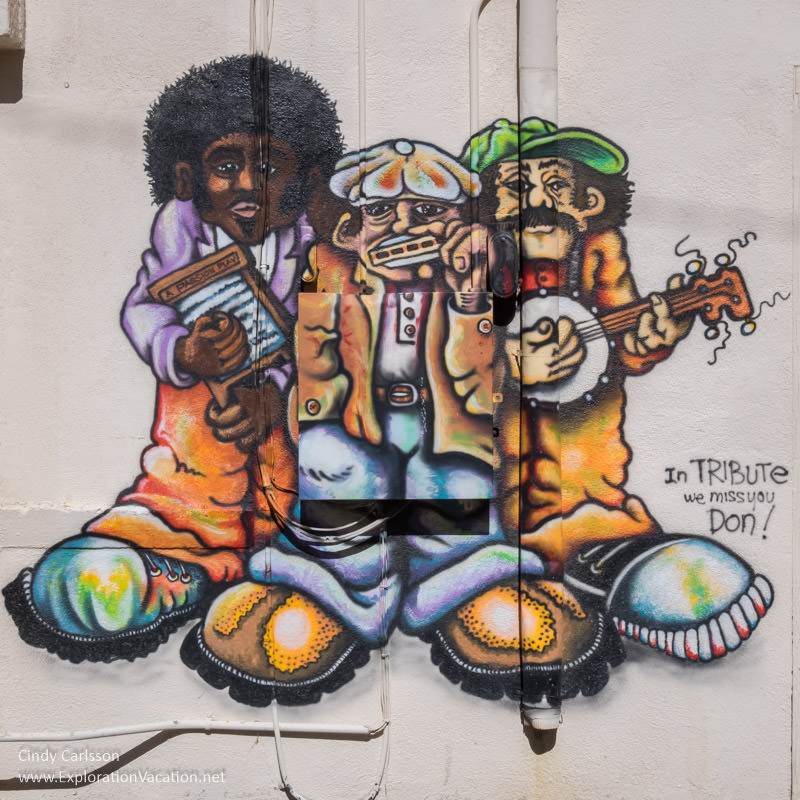 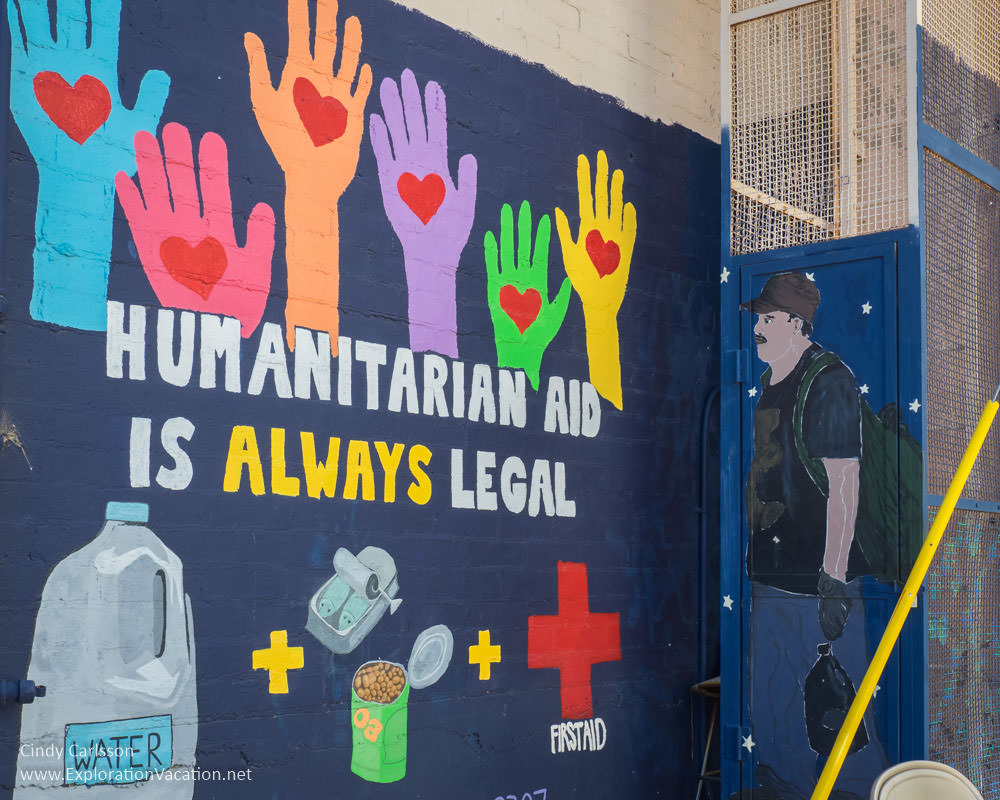 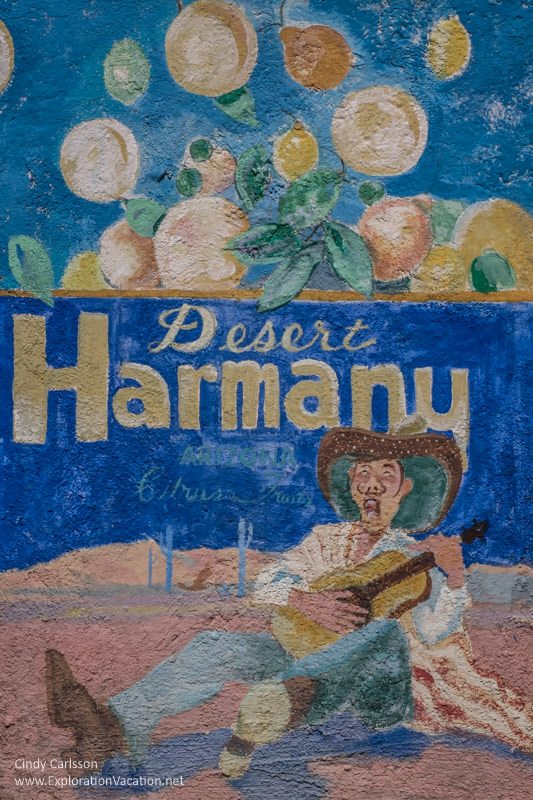 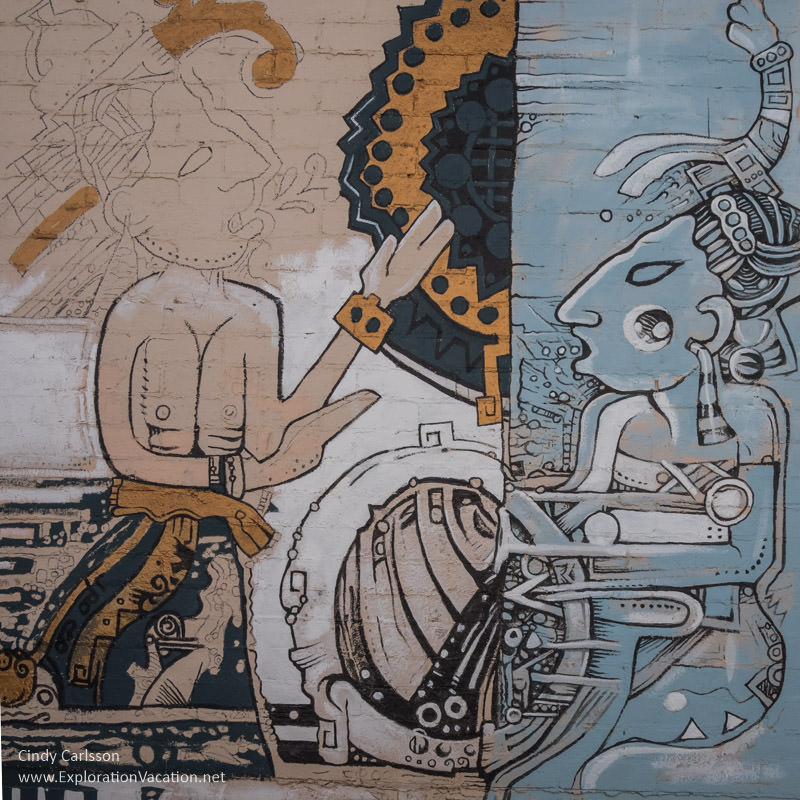 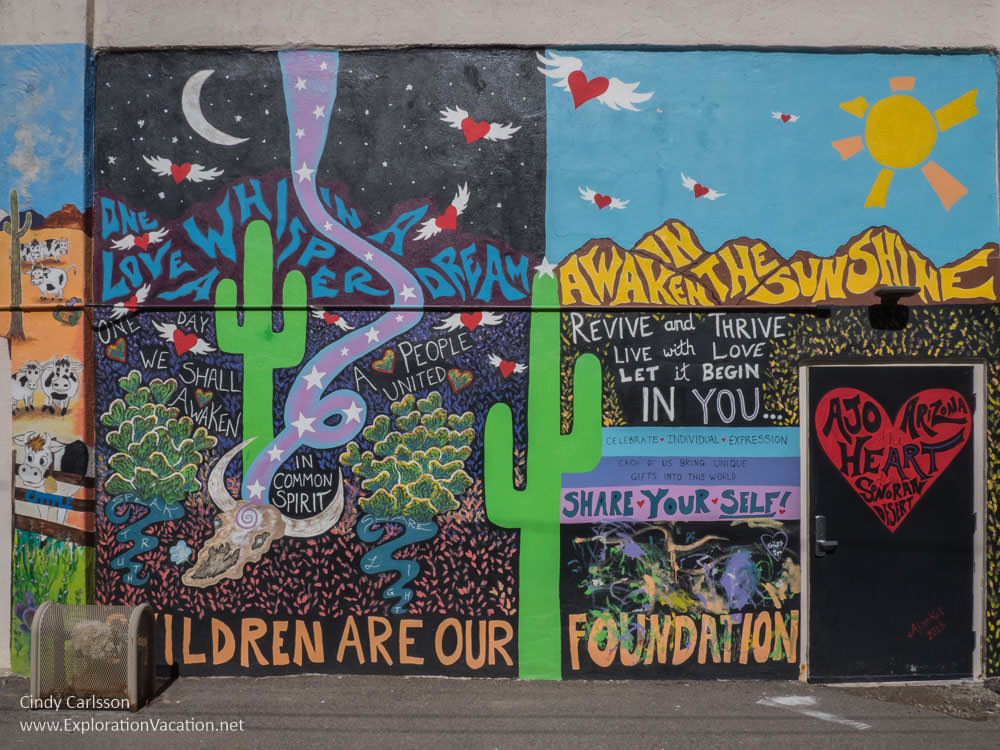 Some of the murals are straightforward, while others may be hard to understand. But figuring out the meaning behind Ajo’s street art is part of the fun.

Ajo, Arizona, is in a very rural area about a two-hour drive south of Phoenix. It’s also 20 minutes north of Organ Pipe Cactus National Monument, making it a gateway to the park. Highway 85 goes right past the Art Alley and the surrounding murals at the south end of town.

There is regular weekday bus service between Phoenix and Ajo via Phoenix Route 685. To get there by bus takes about 3 ½hours.

The USA border check is south of Ajo, but north of the entrance to Organ Pipe Cactus. Traffic coming north sometimes backs up considerably.

Ajo’s murals are located throughout town and are publicly accessible, with the largest concentration in and adjacent to Artists Alley south of the plaza.

The murals featured here were photographed in February 2018. Most were created during the 2015 and 2017 Ajo Street Art Projects. At that time a couple murals are still just sketches or only partially painted, indicating ongoing work.

A couple of smaller pieces are severely deteriorated, but in general the art was in good shape when I visited.

There will be another Ajo Street Art Happening on March 22-24, 2019. Visitors are welcome to come check it out and even grab a paint brush and join in the fun! 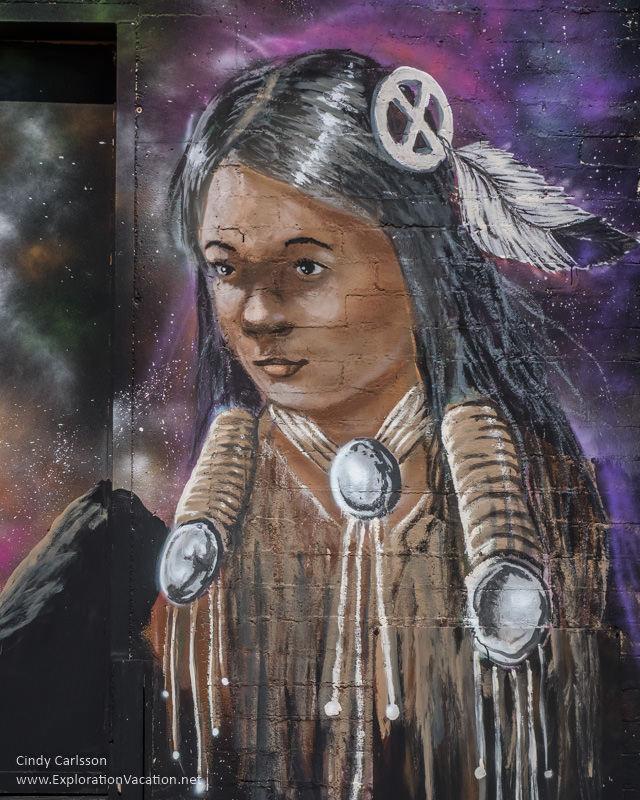 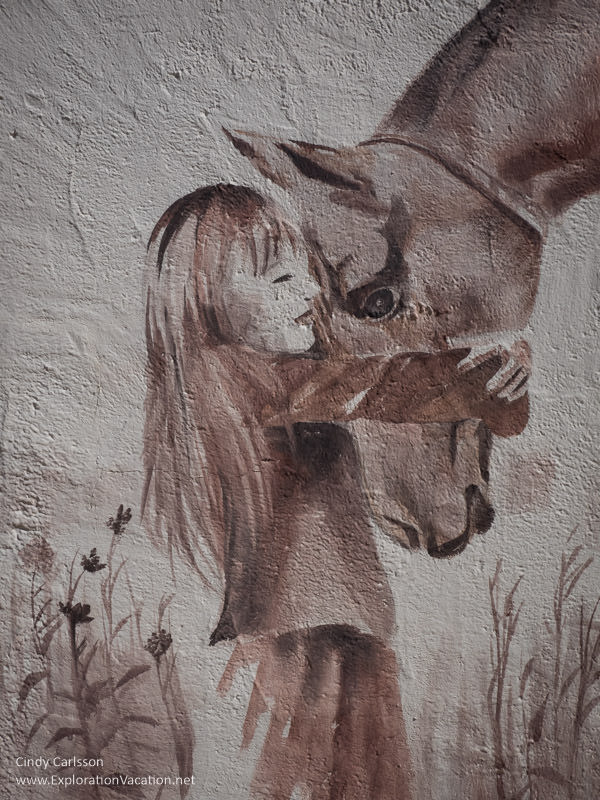 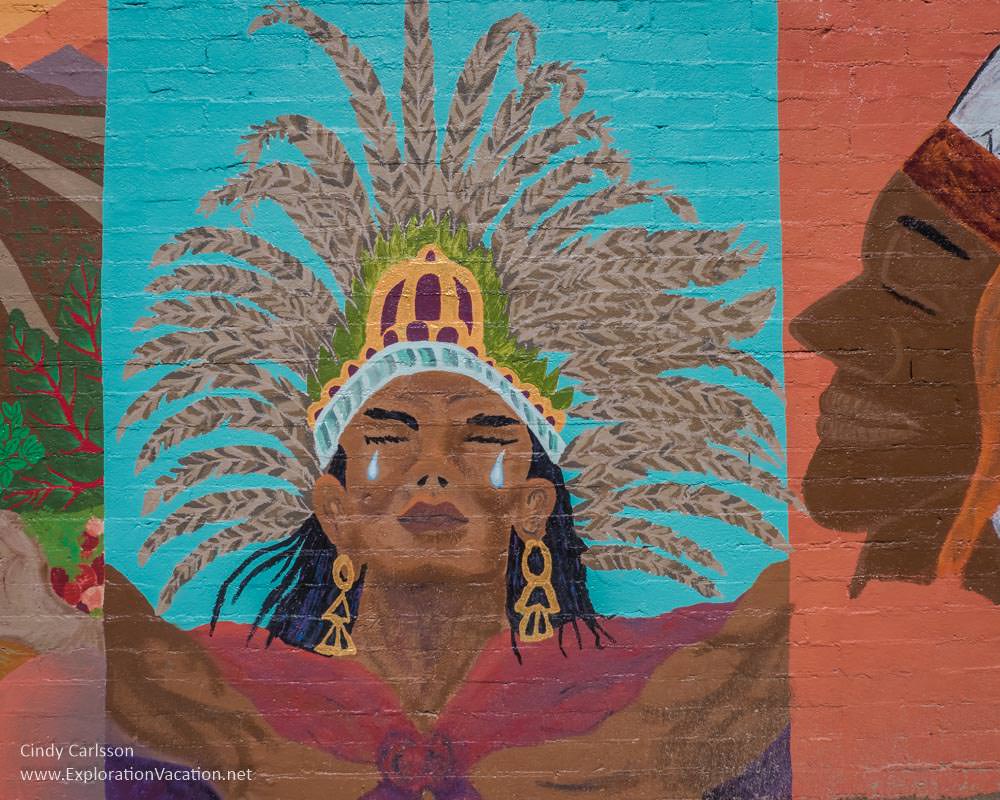 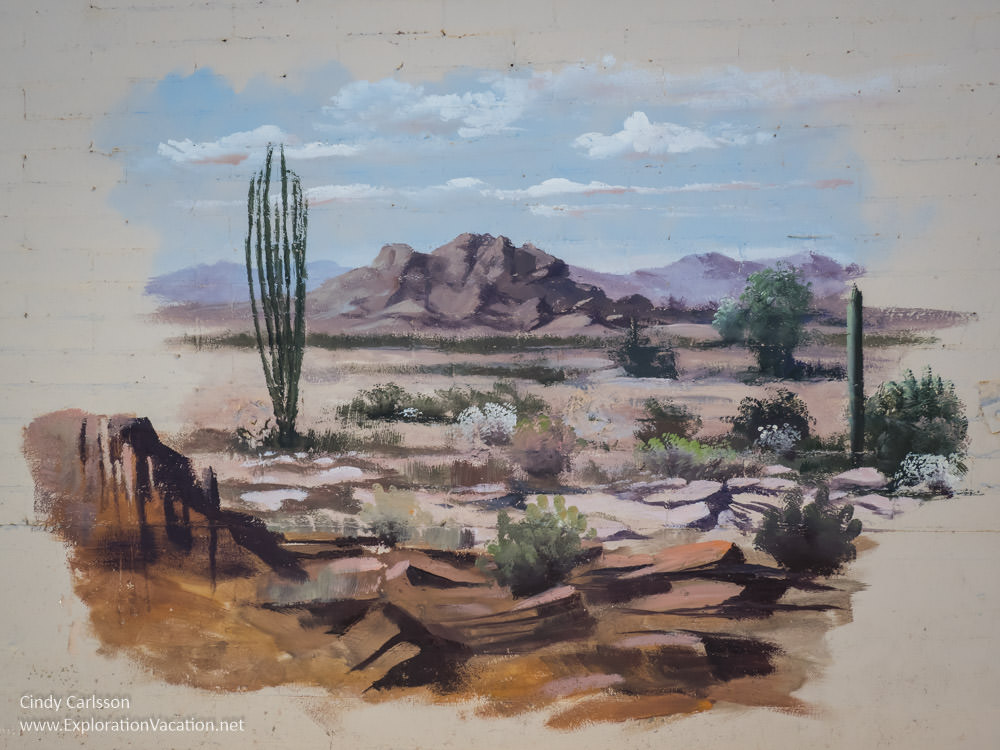 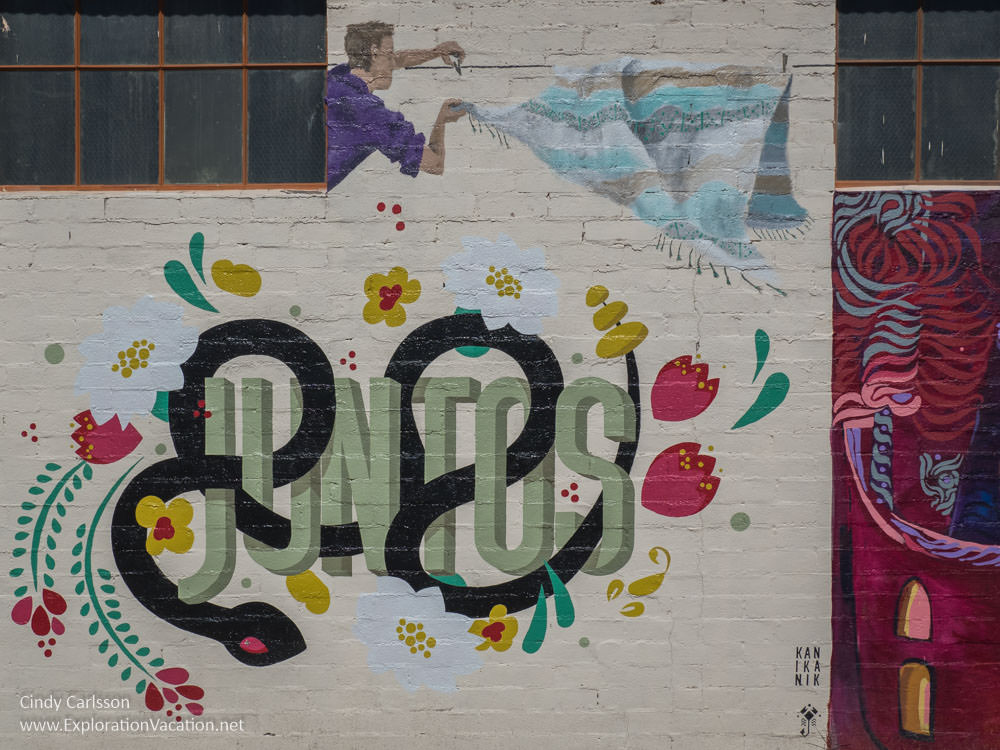 Other things to do in Ajo

I was surprised by how much there was to do in and around this small town.

Besides Ajo’s murals, there are several galleries downtown, all of which feature work by local artists. There is also a gallery at the historic Curley School. That space features work by residents of the school’s community.

Much of the work for sale around town is high quality fine art – mostly paintings and prints – produced by a mix of professional artists and very talented hobbyists.

Housed in the former Saint Catherine’s Indian Mission, the Ajo Historical Society Museum (Facebook) looks to have quite a collection of artifacts. It’s a lovely building, but it has limited hours, so we didn’t get inside.

The lookout over the New Cornelia Mine has a small visitor center with historic photos, mineral specimens, and more. It’s run by a former mine worker who can tell interesting stories about the mine for hours.

There are a number of historic buildings around town, but few are regularly open to the public. Check in at the city’s visitor center (on the plaza) and ask for the architecture walking tour handout.

The Ajo Scenic Loop offers surprising beauty right on the other side of the New Cornelia mine.

Just west of Ajo the Cabeza Prieta National Wildlife Refuge offers opportunities to explore the Sonoran Desert and meet some of its wildlife. This is a rugged area without any services and a four wheel drive is required in most areas. A (free) permit is required to enter the refuge. Stop in the Visitor Center in Ajo to check on road conditions and get your permit.

Sadly, the food scene in Ajo hasn’t caught up to the art scene.

The best restaurant in town when I visited seemed to be 100 Estrella, which has an interesting selection of beers and great burgers. It’s also conveniently located across the street from Art Alley.

Harris & Smith Coffee on the plaza has a nice chai.

The Sonoran Desert Inn and Conference Center is part of the Curley School complex. We didn’t stay there, but it looks gorgeous. Otherwise, hotel options within the city are fairly limited. Read reviews, compare prices, and book a room in Ajo through TripAdvisor, Booking.com, Hotels.com, or Expedia.

On the other hand, Airbnb has a number of options in Ajo. We stayed at Dos Casitas, which includes a private courtyard, super friendly hosts, and an amazing hot breakfast. (If you aren’t already a member of Airbnb, use this Airbnb code to save $40 on your first booking. In exchange, I’ll receive a $20 credit.) 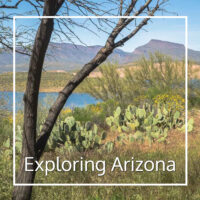