The Denver Botanic Gardens was high on my “must see” list when I visited Denver for the first time. And that was before I knew that the temporary “kizuna” exhibit featured large bamboo sculptures by Tetsunori Kawana and Stephen Talasnik.

Tropical abundance in the conservatory

While I wanted to head straight out into the gardens in search of more woven bamboo, my husband wanted to start in the topical section in the Boettcher Memorial Conservatory.

It seemed like a hot day to be inside a greenhouse, so I was happy to discover that was no hotter inside than outside. AND it was filled with wonderful plants like those from our favorite garden in Hawaii!

There are orchids and other lovely tropical plants nearby too, which is always a good thing.

Back outside, the gardens are a riot of color.

Colorful cacti fill one part of the garden.

I’ve been to the dessert southwest a few times, but never right when the cacti explode into brilliant bloom. It’s is something I’ve long wanted to see, and  I never would have guessed that I would catch that show in Denver, but here it is!

On the other hand, the colors in the Japanese garden are much more subtle. But it’s still beautiful.

As is apparent by now, the Botanic Gardens has many gardens, each with a different theme. They merge, meld, and contrast with each other as I move through them.

Of course, there are also fountains, sculpture, and other artwork large and small.

So there is plenty to see no matter when you visit.

But I was lucky to be visiting during one of the Denver Botanic Garden’s special exhibits.

Kinzu is a Japanese word that means “the bonds between people,” and the Denver show was a celebration of Japan’s influence on the West. The show featured site-specific bamboo art installations by American artist Stephen Talasnik and Japanese artist Tetsunori Kawana.

While Stephen Talasknik was born and educated in the USA, he spent 15 years working in both New York City and Southeast Asia. His early work focused on exploring multi-dimensional constructions on paper, but his time in Asia inspired him to explore the intersection of drawing and hand-built, site-specific, three-dimensional pieces.

He created a city of 40 floating sculptures for the exhibit in the waterlily pool at the Denver Botanic Gardens.

The scene is strange, captivating, mesmerizing . . . and visually cluttered.

The pool is stuffed with sculptures of all sizes.

The intricate sculptures themselves appear fragile — ephemeral remnants of a lost world. At a small collection looks ethereal and serene, but so many packed so closely together creates a confusing jumble of intersecting lines both above the water and mirrored in surface. 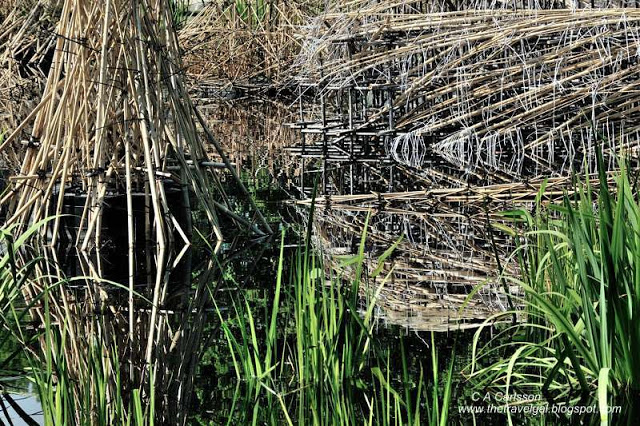 The title seems to reference the “floating world” of Japan’s Edo period when beauty and style were highly valued. But perhaps it was intended to evoke the complex chaos of a city. To me it looks a bit like a floating junkyard – tangled structures set loose on the pond amid waterlilies, reeds, arrowhead, and other plants like so much flotsam. There is simply too much for this small space.  Like the Kirkland Museum, an application of the philosophy “less is more” is in order. Since it wasn’t, I find myself focusing in on the few patches of open water I can find, trying to tame the chaos though my camera’s lens.

The other featured artist in the Kizuna exhibit was Tetsunori Kawana. His work included immense rolling bamboo waves that appeared to glide across the landscape.

Plan your visit to the Denver Botanic Garden

Lunch at the garden

Information on the Botanic Garden, including hours and entry fees, can be found on their website.

Are you familiar with Rakuten, the online shopping app that gives you cash back when you make a purchase? Did you know you can use Rakuten for travel bookings? Well, you can! END_OF_DOCUMENT_TOKEN_TO_BE_REPLACED