This month the Minnesota Museum of Art in Saint Paul is hosting David Hamlow’s Mirror Stage.

In psychology, the “mirror stage” is that period when an infant first recognizes their reflected image.

“The moment when children first recognize themselves in a mirror is a formative one – it sparks a sense of self-awareness, of relationship and connection to their immediate surroundings.”  — David Hamlow on Mirror Stage

Minnesota artist David Hamlow’s Mirror Stage is built on this idea of self-awareness through identification with our reflected image. In the exhibit, he turns a mirror toward the waste we produce.

While this sounds serious (and a little grimy), it’s a funny and thought-provoking walk through funhouse mirrors rather than a deep dive into the garbage dumpster. 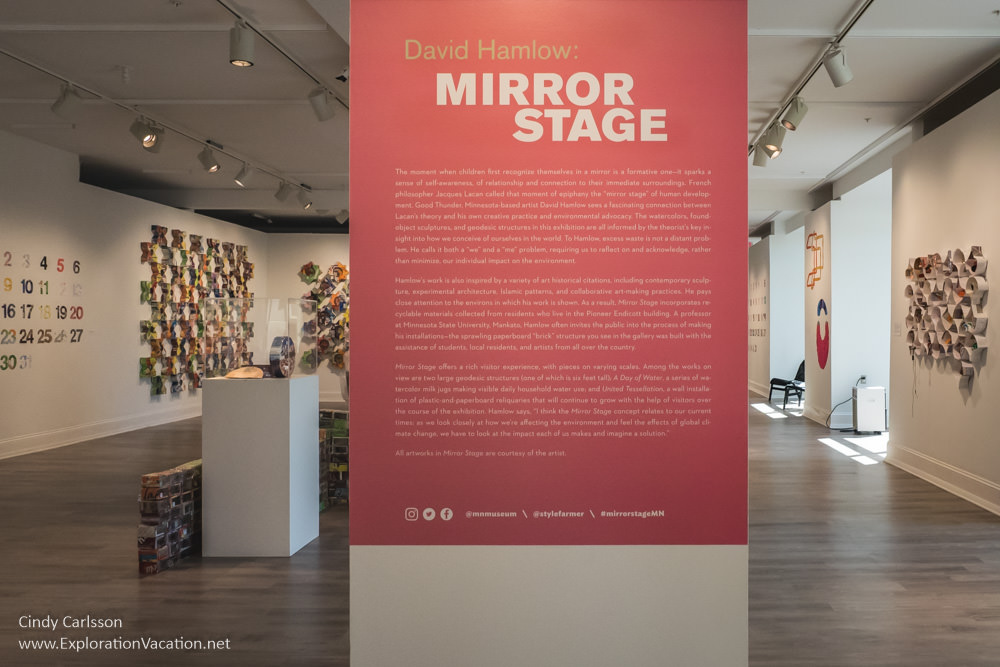 The mirror Hamlow creates is made up of watercolors, drawings, and found-art pieces. However, the bulk of the show consists of cheerful structures made from paper and plastic trash.

Planets made of trash

The first piece to catch my eye is a large sphere that appears to float in space like a wayward planet.

It is made out of pizza boxes.

There are actually two of these pizza box spheres.

The other is covered with cardboard containers with handles.

I’m sure there is a sign that says “do not touch,” so I didn’t try opening one.  However, in other exhibits these boxes serve as “junk drawers” that open to display a variety of useless or cast-off objects.

Thus, I’m pretty sure there are all sorts of goodies hidden inside these. . .

Much of David Hamlow’s Mirror Stage exhibit is designed to showcase small cast-off objects that most of us would have tossed in the trash.

By definition, a reliquary is a container used to hold holy objects. By tradition, they are objects of religious significance. Usually the venerated relic is a physical remnant of a saint, whether a bit of clothing, a bit of an object (there are many, many splinters of the true cross in reliquaries), or a bit of the actual saint (bones are popular).

While Hamlow credits his interest in reliquaries to a trip to Italy, it’s clearly an idea he is still working though. Beyond his interest in the way the display of an ordinary item elevates it, Hamlow appears to be struggling with the question of why seemingly useless items are saved. Are they somehow holy? If so, why?

A wall made up of more than 1,200 cardboard bricks meanders through the installation.

Like the other constructed works in David Hamlow’s Mirror Stage installation, the cardboard blocks include space to display cast-off items. Designed as junk drawers rather than reliquaries, these seem like places to hide (rather than elevate) those items you can’t bear to throw out but have no real reason to keep.

Of course, at this time in American history the building of walls is surrounded by conflicting visions and values. The very purpose of walls is controversial and Hamlow’s movable walls raise questions about what is walled in or out, what is hidden or revealed.

And there is more

While the bulk of the installation consists of various cardboard constructions, there are also wall cardboard calendars, a watercolor of water jugs (representing water consumption by Hamlow’s family), an illustration made from cat food bags, and more.

While he works in a variety of media, Hamlow often creates art out of the packaging left over from the foods he and his family consume and objects he finds.

While he appears to be the ultimate hoarder, his work makes effective use of his accumulated detritus. And most of his constructed pieces are collaborative; meaning trash contributed by others is also incorporated into the piece.

Mirror Stage includes many of these collaborative pieces. For example, the wall on display includes blocks made by a number of project participants over the years. Other pieces were created or expanded during this exhibition using trash donated by residents of the Pioneer Endicott building and other community members.

Plan your visit to Mirror Stage

David Hamlow’s Mirror Stage will remain on exhibit at the Minnesota Museum of American Art (The M) through July 30.

On the evening of July 6th, Hamlow will help visitors create sculptural pieces from recycled consumer packaging. This is an M After Hours event that will also include local beers, upcycled products, and live music. Tickets are available through the website.

The M is located on the ground floor of the historic Pioneer Endicott building in downtown Saint Paul, Minnesota. It is open Thursday – Sundays. There is no fee to visit the museum, but donations are appreciated

Are you familiar with Rakuten, the online shopping app that gives you cash back when you make a purchase? Did you know you can use Rakuten for travel bookings? Well, you can! END_OF_DOCUMENT_TOKEN_TO_BE_REPLACED