One of the good/bad things about tours is that they force you to go places you would not go on your own. In my case that includes pretty much anything connected to sports.

At the Bronko Nagurski Musuem

So you can guess that a visit to the Bronko Nagurski Museum in International Falls, Minnesota, was not something I would have chosen to do on my own. 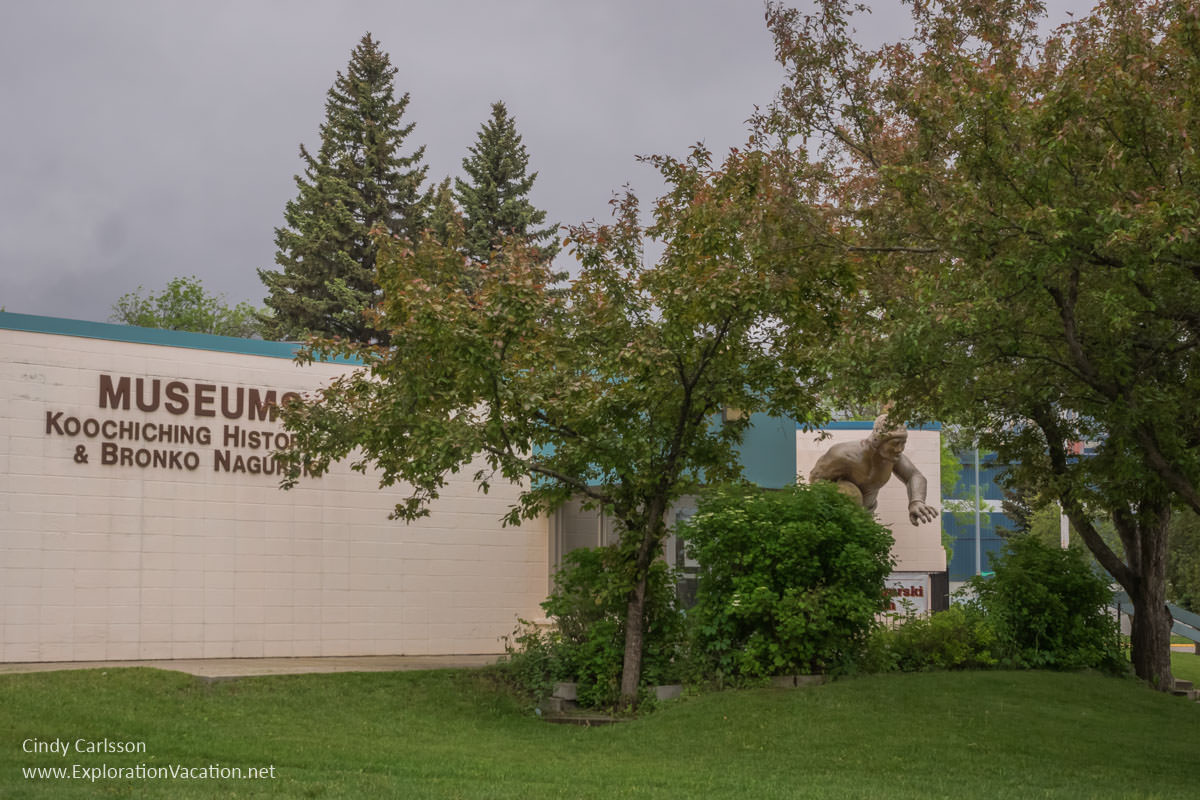 That’s why tours can be a good thing.

Now, I had heard Nagurski’s name before (I’m not completely out of touch with the world of sports), but if you’d asked me what sport he played I would have guessed ice hockey. (Isn’t every famous athlete from northern Minnesota a hockey player?)

My mother (who was looking forward to the Nagurski museum) informed me that he was a wrestler. (Apparently, a really good wrestler.)

Needless to say, that was news to me, although not nearly as unexpected as the revelation that my mother used to follow pro wrestling.

However, after one look at the over-sized statue of Nagurski, I knew he was a football player . . . an insight that confused my mother a bit. “I’m sure he was a wrestler.”

It turns out that International Falls resident Bronko Nagurski was both one of the greatest football players of all time (even I know that being named a collegiate All-American for two different positions in the same year is pretty unusual, and then there is his induction into both the College and Professional Football Halls of Fame in their inaugural years) and a two-time world champion heavyweight wrestler. Nagurski was such a strong and talented athlete that he played football for the Chicago Bears from September to December (the season was short back in the 1930s, but the game was bruising) and then wrestled from January to July. By 1937 he was wrestling and playing football pretty much at the same time. He loved football, but left the sport completely in the mid-1940s while continuing to wrestle until 1958.

Now that’s all pretty impressive and the museum has videos that show his athletic prowess as both a football player and a wrestler. He was an amazing athlete.

But he also comes across as just a really good guy.

In a world where pro athletes who are paid enormous sums and treated like kings too often end up in the news for bad behavior, Bronko Nagurski stands out as a humble man who worked hard, gave back to his community, and lived as a regular guy. For the first time I could see how an athlete could be a good role model.

Nagurski is a local hero, so it’s possible to think the museum puts too much emphasis on his humility, but there are clues that the portrayal is accurate. First is the fact that everyone seemed to genuinely like the guy, both while he was a pro athlete and after he settled back down in International Falls to run a gas station . . . although they generally didn’t trust him put their gas cap back on, as it wasn’t likely to come off again without assistance.

But more evidence of Nagurski as a down-to-earth guy comes through in what is and is not on display. The museum has some shiny trophies, a few garments, and some other memorabilia, but there really aren’t terribly many mementos for  a career as long and successful as Nagurski’s. It appears he wasn’t much interested in collecting stuff about himself. 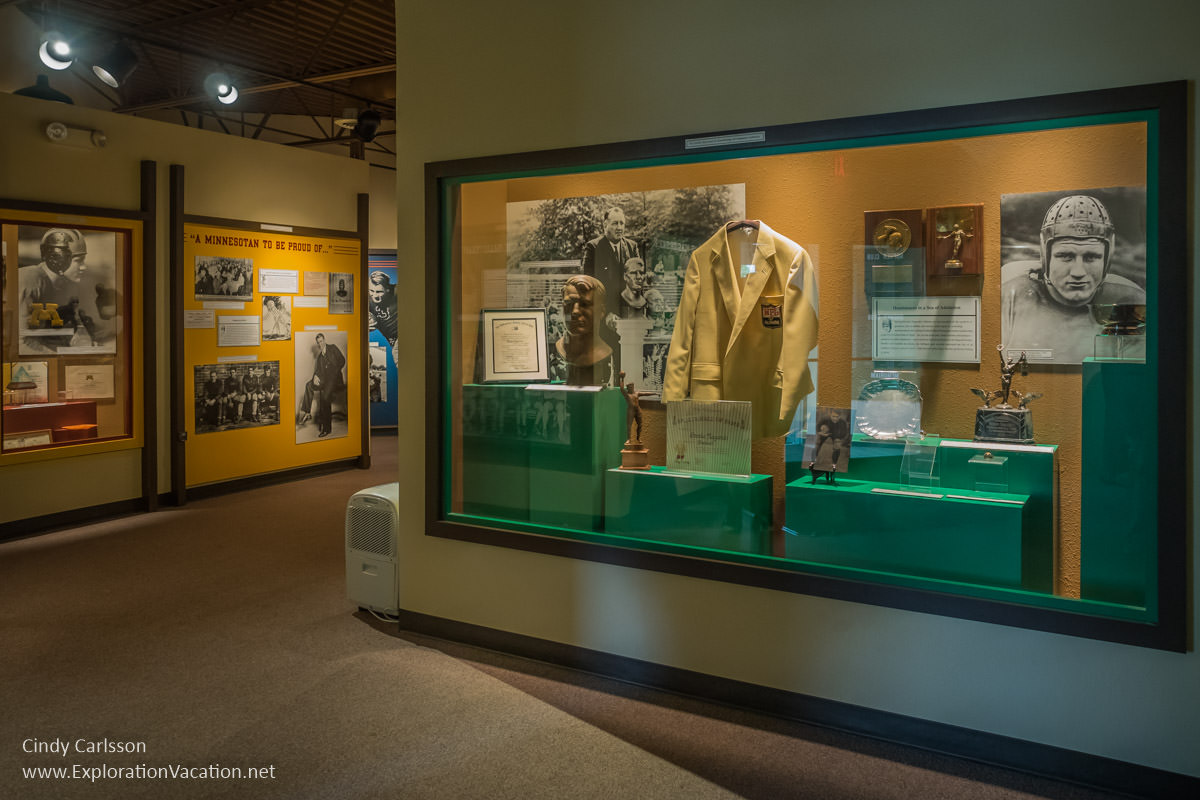 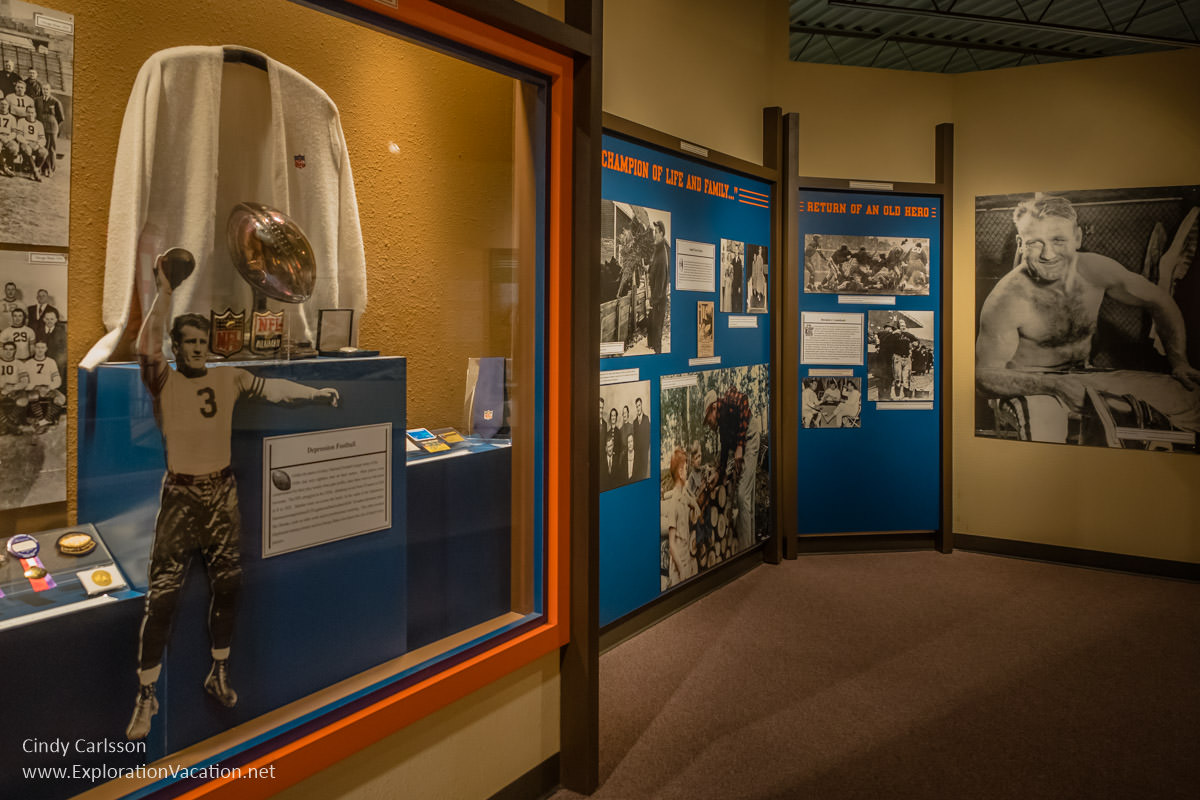 Indeed, most of the memorabilia in the museum’s collection was stored out of sight in a closet.

Most, but not all of it.

One trophy was on display in Nagurski’s home, and it seems to say a lot about Bronko Nagurski as a person. Unlike the other trophies on display (the shiny trophies stashed in his closet) the 1938 Dispatch-Pioneer Press trophy for Minnesota’s All-Time Outstanding Athlete looks worn and bit battered from its years on display. 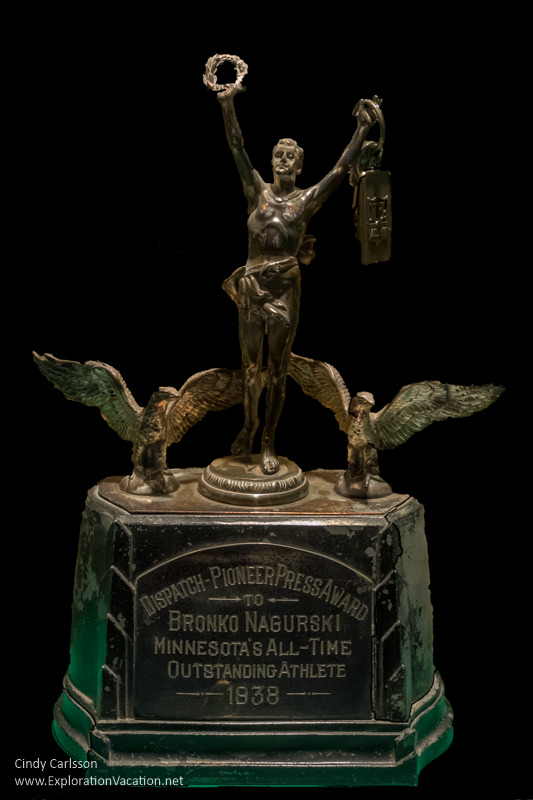 He kept this one on display because it was a good place to hang his keys so he could always find them.

The Bronko Nagurski Museum is located in International Falls, Minnesota, where it is part of the very interesting Koochiching County History Museum. The museum has informative displays and a good movie on Nagurski (guaranteed to make you nostalgic for the pro athletes of the past). If you want more information, museum director Ed Oerichbauer is likely to be able to answer whatever questions you may have. There is a small fee to visit the museums.

I visited the museums as a guest of the International Falls, Rainy Lake and Ranier Convention and Visitors Bureau and Explore Minnesota and appreciate their hospitality . . . and the introduction to Nagurski.

Looking back in time at the Koochiching County History Museum

3 thoughts on “Connecting with Bronko Nagurski in International Falls, Minnesota”

Are you familiar with Rakuten, the online shopping app that gives you cash back when you make a purchase? Did you know you can use Rakuten for travel bookings? Well, you can! END_OF_DOCUMENT_TOKEN_TO_BE_REPLACED