Romani has been cagey about what he has planned for us today, saying only that he is taking us to the “other side of the world.”

We leave downtown Cairo, our mini-bus working its way up a narrow roadway that twists up into the hills at Cairo’s edge. The hills close in around us until we are in a narrow canyon of dilapidated buildings, the rocky hill towering above. The maze of narrow streets is made even narrower by bundles piled high along the buildings. The scene seems disconnected from the city where we have spent the past few days. 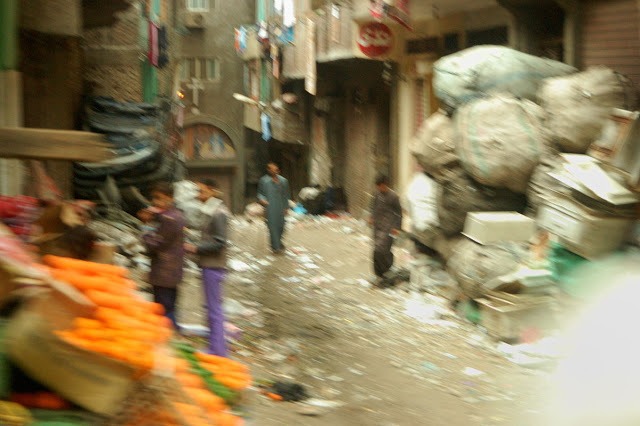 Yes, Cairo’s Christian garbage collectors: For about 50 years now, a group of Christians (usually referred to simply as the Zabbaleen), have gathered and made use of much of the garbage created by this city’s millions of inhabitants.

It looks poor, although it doesn’t have the desperate look of the shanty towns outside Suva in Fiji. The buildings here are substantial (although dangerous, should an earthquake strike), with living quarters on the upper floors and space for storing both the unsorted garbage and items salvaged for recycling. There are small shops and other businesses scattered throughout. It doesn’t look so different from other poor places. 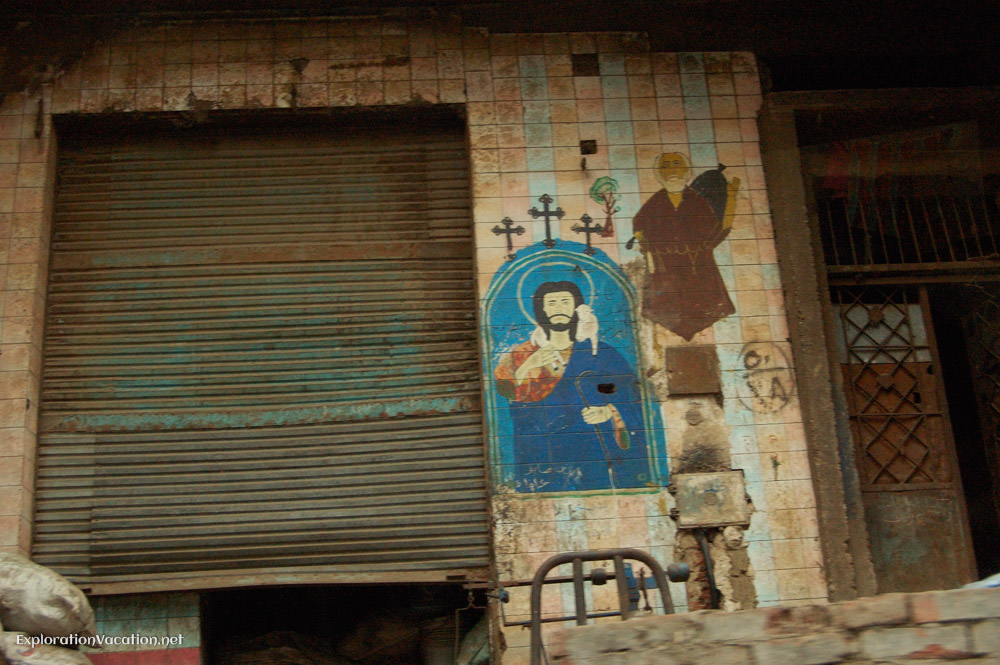 We continue on, stopping only when we reach the gates of a monastery. Ah, yes, Romani did say we would be attending a Coptic worship service this morning. 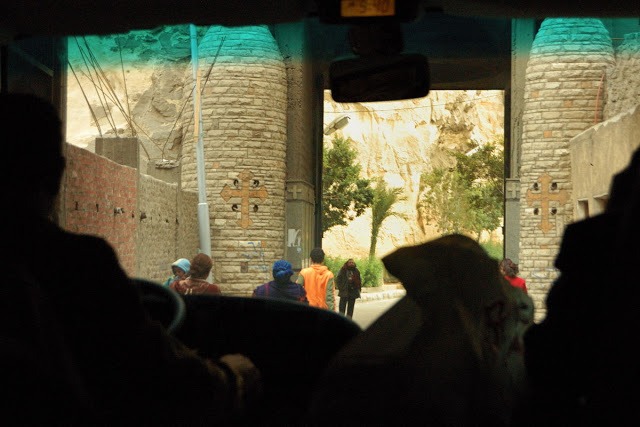 We pass through the gates and find ourselves in an open area with a number of churches and other structures. Biblical stories are carved into the rocky hillsides. This place – the Monastery of St. Simon the Tanner – is otherworldly. 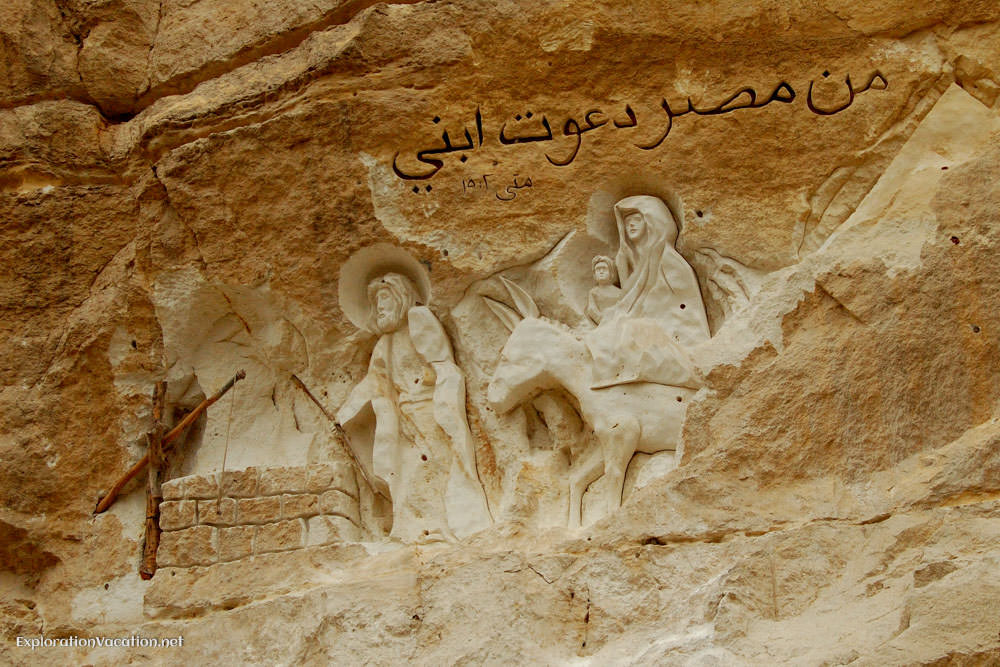 We have little time to look around though, as we are hustled off toward the entrance of a church.

Once through the church’s entryway, we pass through a wide hall and then find ourselves in a huge cavern carved into the base of the mountain. It is a startling transition.

Worship is underway and the enormous cavern is nearly filled with worshipers.

We work our way through this busy place and end up at some open benches near the top of the cavern. Faded light and crisp air creep in from outside. The room is cool and damp. What is this place? The effort that must have gone into the construction of this place – the emptying out of this space – is almost incomprehensible. When was this done? Who did it? Why did they do it?

The worship service underway far across the room is equally incomprehensible. We have entered at some point mid-service (Romani didn’t think we were capable of sitting through an entire three-hour Coptic service) and what I see seems to be a group of priests moving around a covered table or alter in an esoteric dance.

I have no idea what is going on, but as I continue to watch, I begin to realize that they are preparing for holy communion – the universal Christian act of preparing and blessing the host is obvious, even in this unfamiliar and elaborate form.

Men and women don’t generally sit together at a Coptic service and, when communion begins, the men line up on one side while the women and most children go to the other. Although Coptic women are not required to cover their hair for worship (or otherwise), most here have either a scarf or prayer shawl and cover themselves as they go up for communion. Over on the men’s side, one man has a young girl with him. Her head is not covered and, as they approach the front of the line, I see him looking around nervously, as if in search of something. . . when they reach the first of the servers, he takes an extra napkin and drops it on top of the little girl’s head with a clear sense of relief. Problem solved.

Bread that has been blessed (but not consecrated) is available throughout the hall. It is sweet and flavorful – just the way holy bread should be!

And then, too soon, it is time to leave.

As we thread our way out, we pass a baby dressed for baptism. The miniature holy robes imply a knowing worldliness that contrasts with the innocence of the baby’s face. 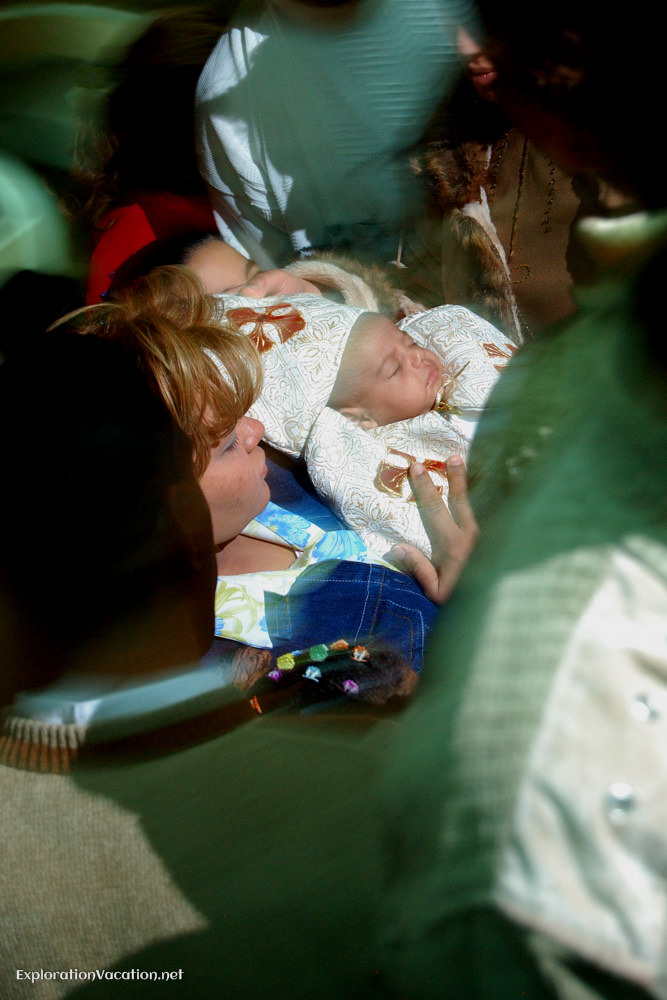 Back outside, we walk to another part of the complex, where a modern version of a traditional church stands. 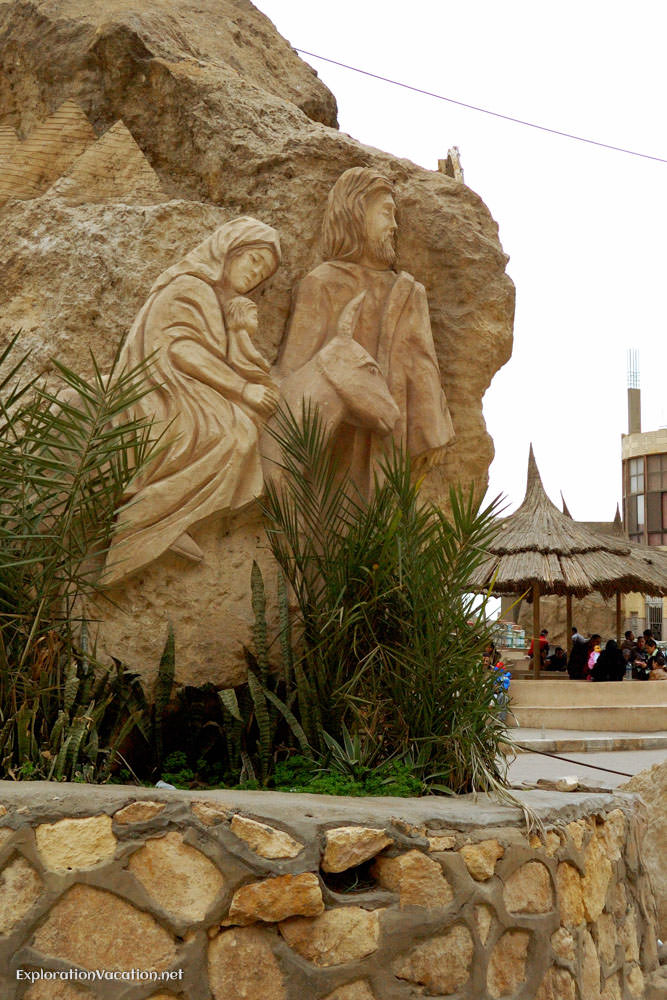 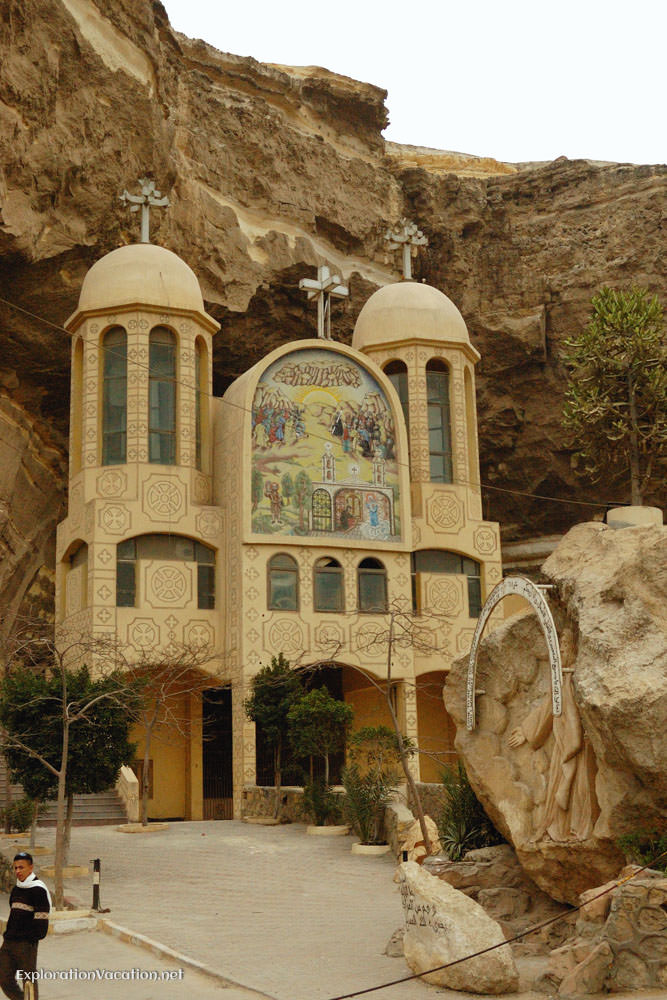 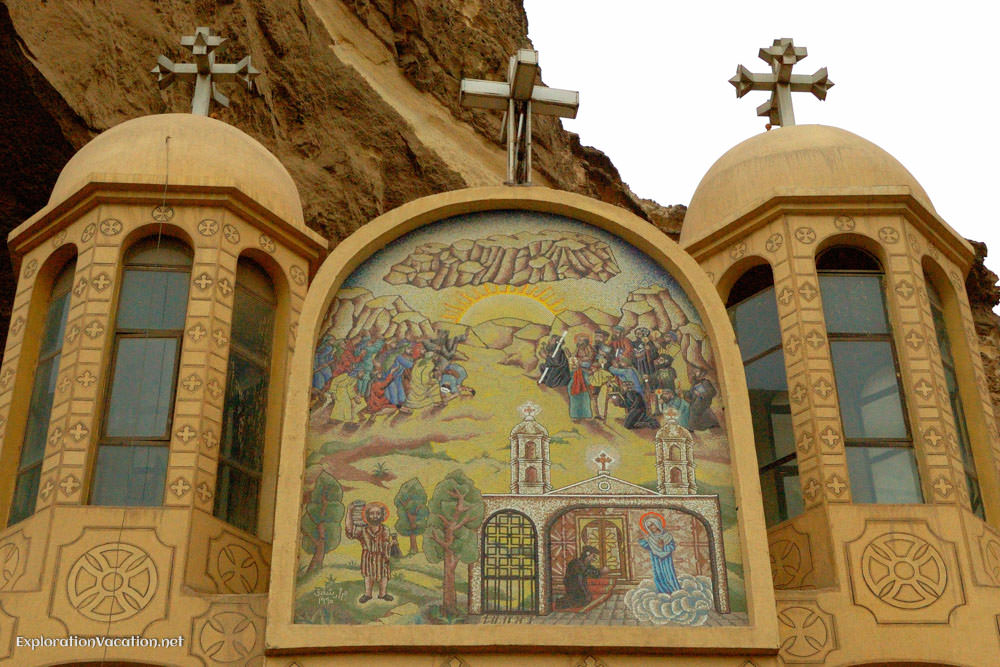 Even though I should expect it, I’m still surprised to discover that this structure is also just a façade. It marks the entrance to the Virgin Mary and St. Simon Cathedral – another gigantic cave church cut into the mountain. 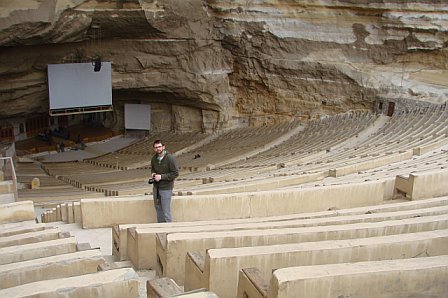 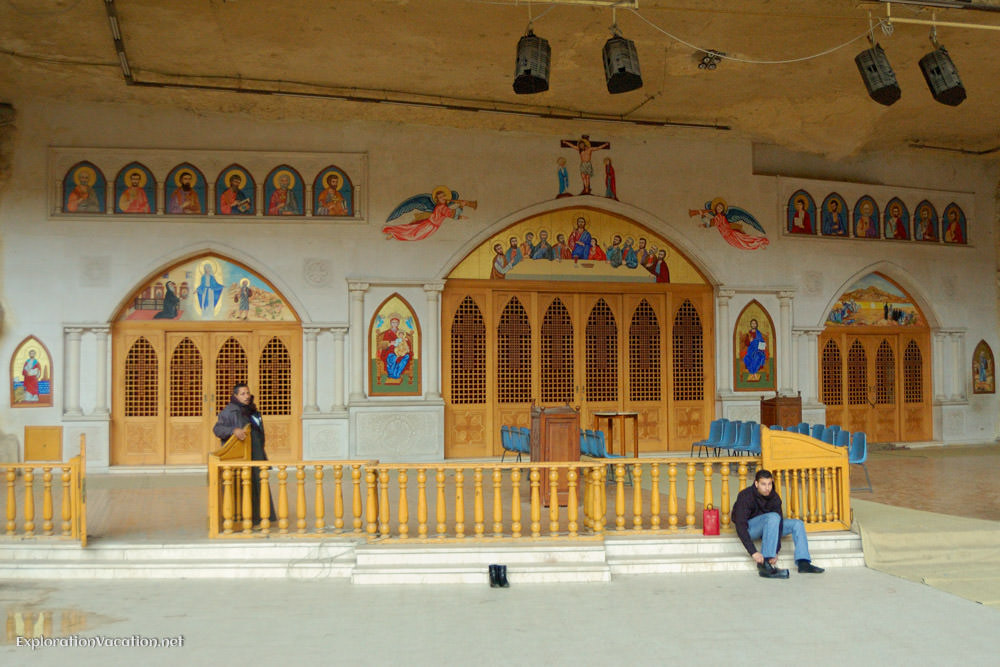 Osama has joined us to explain the “history” of this church, the deeds of St. Simon, the travels of the Holy Family, and other miraculous facts.

Perhaps he senses my skepticism, as he keeps insisting that science has proved that these stories are true – or at least 80% (or was it 95%?) true, with scientists “studying” them even as we speak in order to further prove their basis in fact.

As it has throughout this trip, this insistence on the factual basis of miraculous events continues to perplex me. It’s not just that I don’t believe in these type of miracles, I don’t even see why people would even want – or need – to believe them. Why is it so important that these miraculous tales of divine intervention be historically factual events? Why aren’t the lessons they impart enough? Osama is a smart, well-educated man, but he truly believes these stories are historical facts that can and will be confirmed by modern science. As I listen, I wonder how he can believe in the legitimacy of scientific inquiry (which he clearly does) and, at the same time, believe in the historical accuracy of these miraculous stories. I can’t imagine that. The idea is so alien that it makes my brain hurt.

Back in the buses again, we head back into the heart of the Zabbaleen community, where we stop at an outpost of Mother Teresa’s Sisters of Charity. Here the sisters care for sick and handicapped children and elderly women. While the elderly women (many of whom are mentally ill) are permanent residents, the children are temporary wards, cared for by the sisters while they are young, but still part of the families to which they will return to when they are older.

Romani wanted us to come here to visit the children, but it is Sunday. While Sunday in Egypt is a the equivalent of Monday back in the states (Coptic Christians are allowed some time off to worship, but it is a regular work and school day), the Catholic sisters send the children home on Sundays.

We are given a tour of the facility anyway. The small complex is a well-worn place, but scrupulously clean and carefully maintained – the Sisters make much of the little they have.

The few children left here today are severely handicapped and, while they are clearly being cared for, there is a stark contrast between the life they live and the life they would have, even as poor children, in the states. Despite the efforts of the Sisters, it is a sad place.

On the other hand, I think many of the women who live here may be luckier than their counterparts back in the states, where so many mentally ill women seem to end up destitute and homeless on the streets. At least these women are safe, their basic needs tended to.

It is time to leave this side of the world and head back to a more familiar world, but our return is delayed slightly, as now it is lunch time and the streets are swarming with school children. They fill the narrow streets, stopping by our buses to shout “hello!” and wave cheerfully to us.

I wish we could spend the day with them learning from them about their lives.

Are you familiar with Rakuten, the online shopping app that gives you cash back when you make a purchase? Did you know you can use Rakuten for travel bookings? Well, you can! END_OF_DOCUMENT_TOKEN_TO_BE_REPLACED