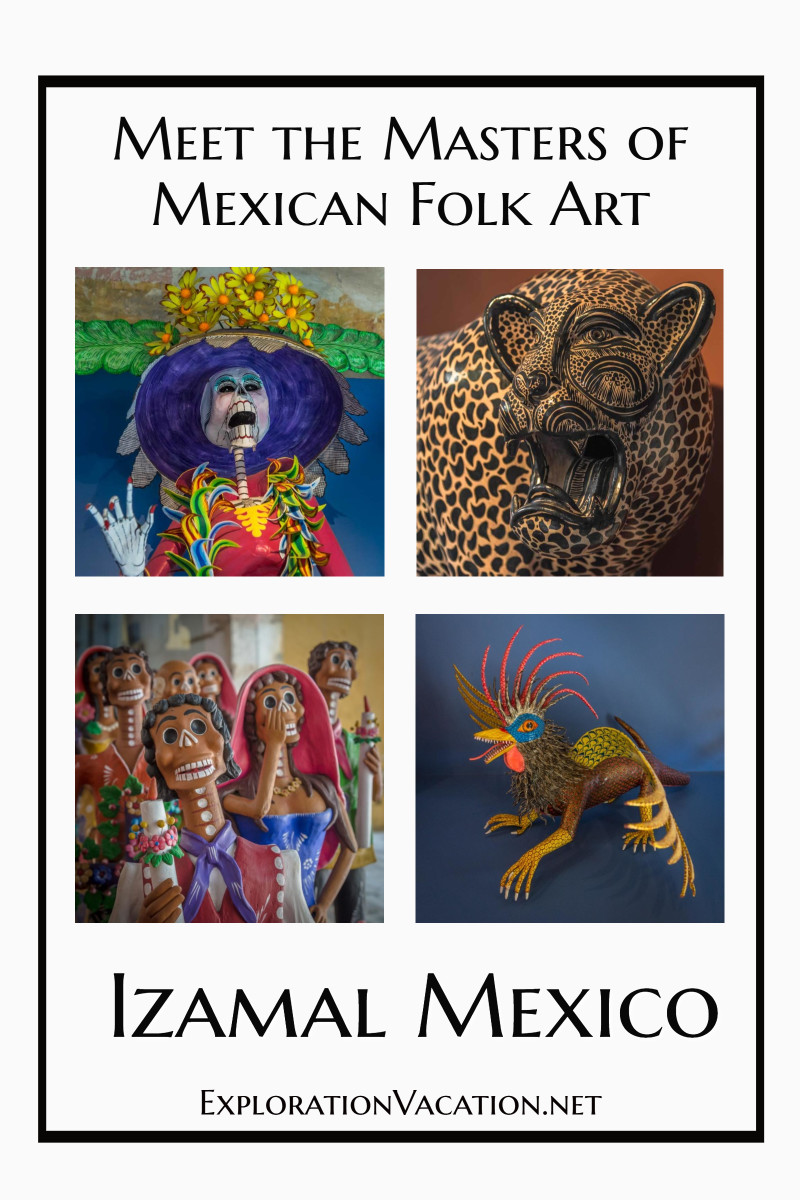 As if wandering the golden streets of Izamal weren’t enough to make a visitor smile, this little town in the Yucatán has another treat hiding behind those yellow facades: A cultural center bursting with vibrant creations by masters of Mexican folk art from across Mexico. 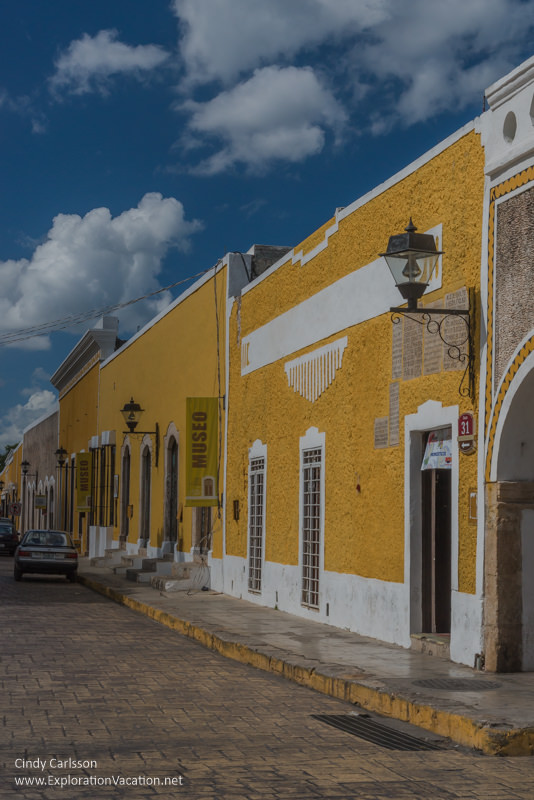 A glorious collection by the masters of Mexican folk art 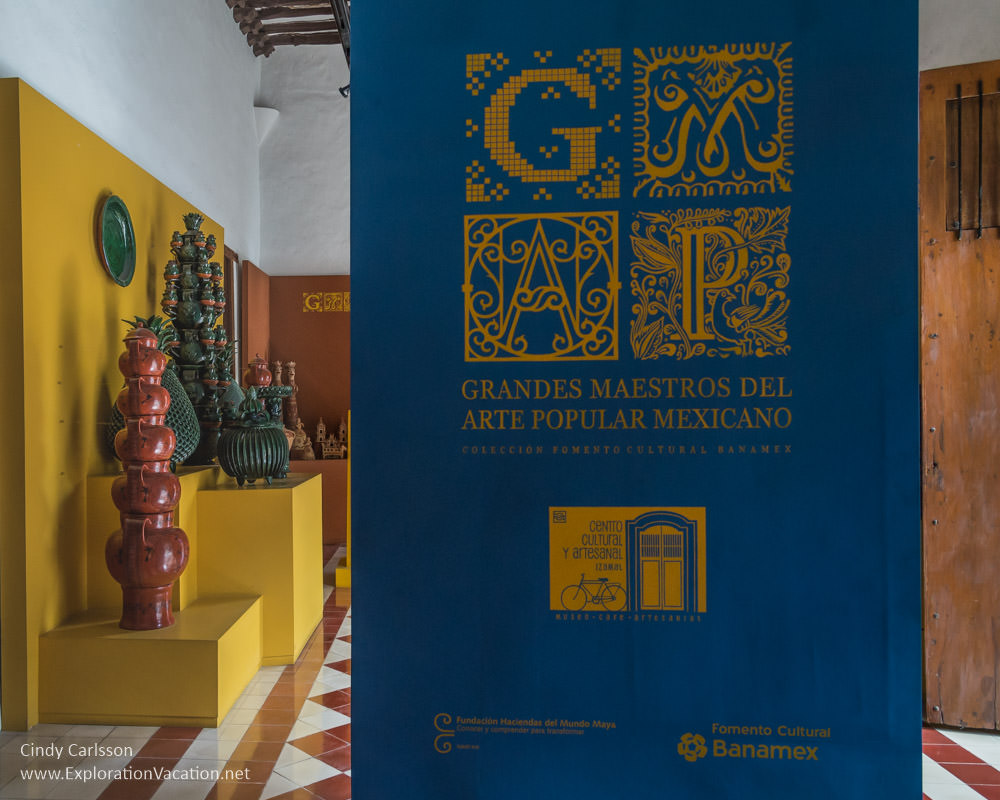 The exhibit bursts with color and life despite the fact that many of the figures are skeletons, like this skeletal funeral procession. 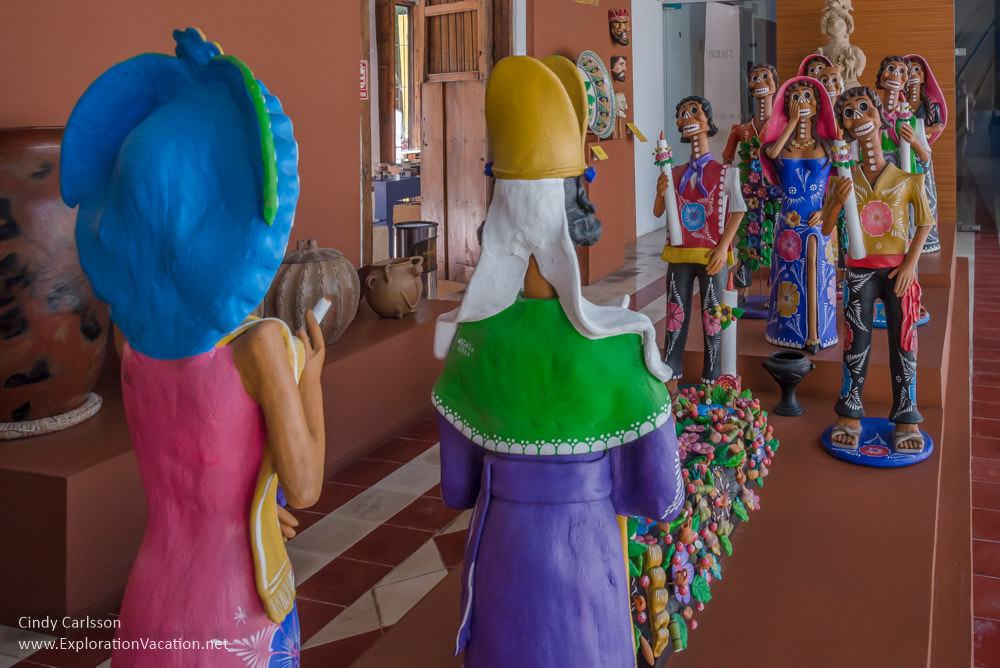 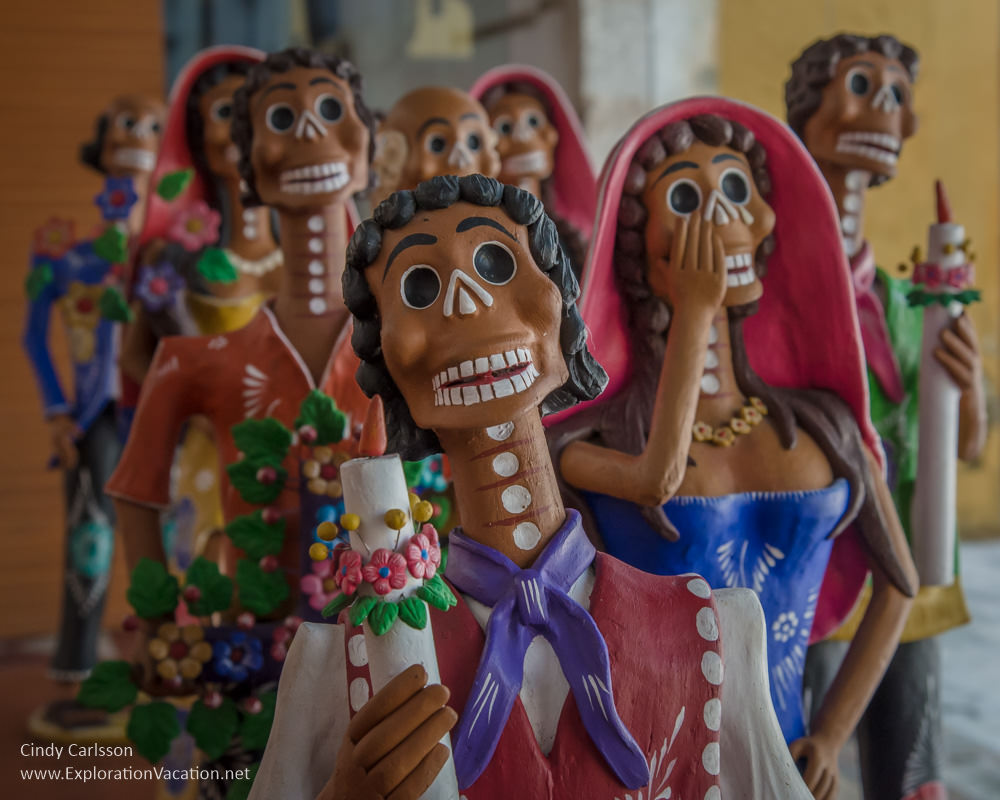 Or this larger-than-life lady.

The celebration of the Day of the Dead (Día de Muertos) is major event in Mexico, so it’s not surprising to see many pieces on that theme. 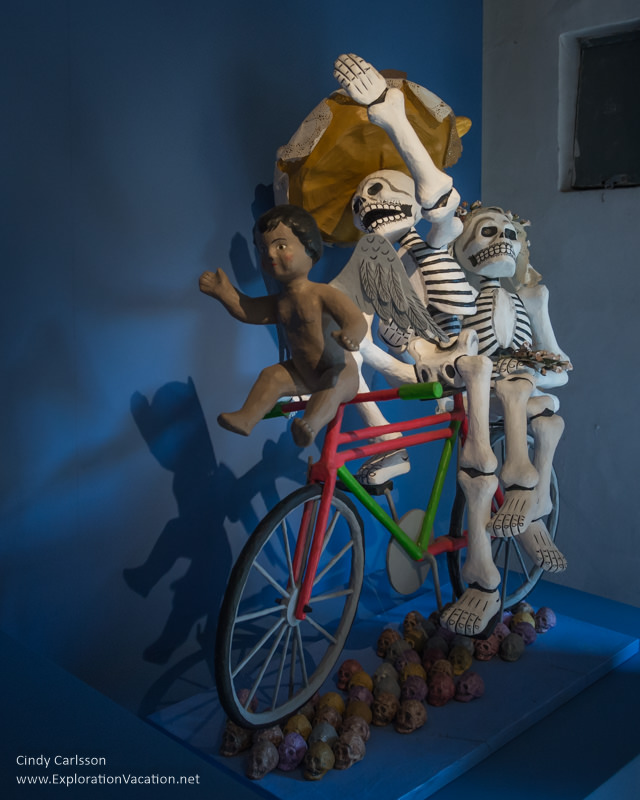 But there are many other themes included as well. 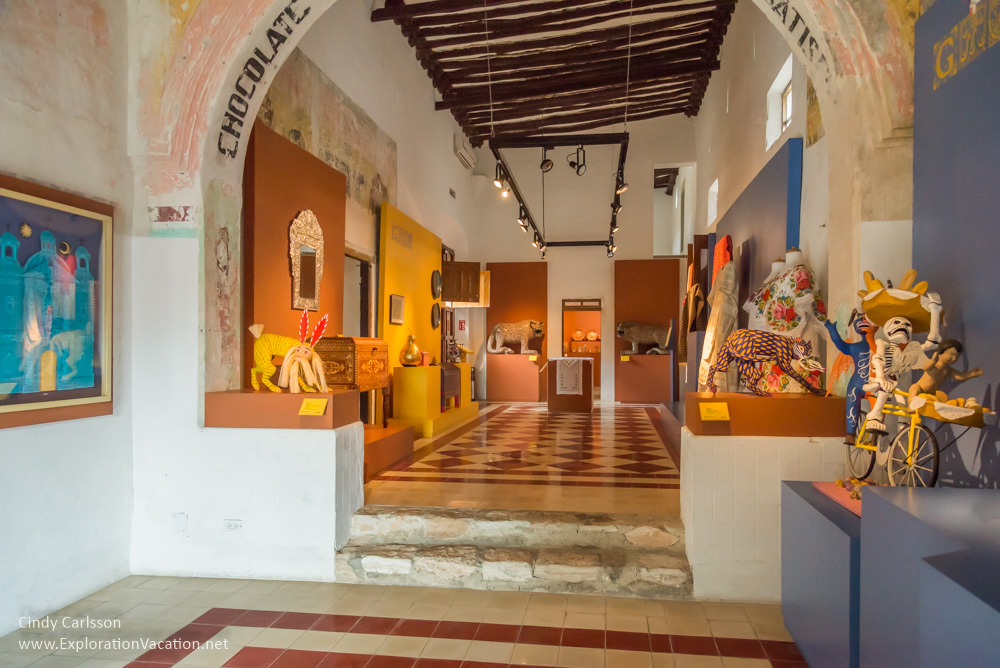 The exhibition is largely organized by materials rather than thematically. That means all the pottery is in one area, wood in another, fiber in still another, and so on. So, while there are sections bursting with vividly colored clay and wood, there are also more subdued displays of these and other materials.

It’s art that provides a fascinating peek into Mexican culture.

The Cultural Center in Izamal, Mexico, is housed in a historic building near the convent in the heart of the city.

It houses several exhibits of local craft in addition to the Grand Masters show, historical exhibits, demonstration space, and a small gift shop featuring high-quality work by local artists. When we visited in 2014 there was also a spa and a “café,” that was able to sell us a Coke, but not much more. There is a courtyard where you can sit under a couple palm trees can get a peek at some ruins through the fence.

Izamal appears to be one of several locations in Mexico that display art from the wonderful Grand Masters of Popular Mexican Art collection put together by the Fomento Cultural Banamex.

The exhibit in Izamal has very detailed signage in English. That assures visitors have information on the art form, its place in Mexican culture, the artist, and the individual piece.

The cultural center is larger than it looks. Expect to take a couple of hours to see everything.

At least some of the pieces on display in Izamal were part of a large traveling show that came to the USA around 2001-2004. However, few images and no artist information from that show appear to be available online. A second exhibit in 2015 included items from this collection, as well as pieces from across Latin America, Spain, and Portugal. The HuffPost feature on the exhibit includes a number of images.

If, like me, you missed those shows, then your best option is to spend more time in Mexico!

It appears that Fomento Cultural Banamex is still identifying and exhibiting the work of Grand Masters. That seems to result in a variety of annual programs and exhibits.

Currently, you can see the work of more than 5,000 pieces by over 800 artists in an exhibit at the Citibanamex Palace of Culture (Iturbide Palace) in Mexico City. The exhibit, Grand Masters of Mexican Folk Art at 20 Years is on exhibit through May 2020.

Because the Citibanamex Palace of Culture is the home of the bank’s cultural program, there are usually exhibits here that include at least a few pieces from the collection. But probably not this many. And the palace was renovated recently, so the architecture is also said to be very worth a visit.

For those interested in learning more and seeing more work, there are a couple of publications on this collection.

When we visited, the original lavishly illustrated exhibit book was still available at the Cultural Center in Izamal for a reasonable price. It’s large, in Spanish, and heavy to haul home, but it’s a deal compared to the cost of purchasing it in either Spanish or English in the USA.

A more reasonable option is a 2001 publication on the collection. While it is considerably more affordable, I don’t know if it includes the complete collection. However, it does provide artist profiles and illustrations of their work.

This is a full update of an post originally published in March 2016.

A carriage ride through Izamal 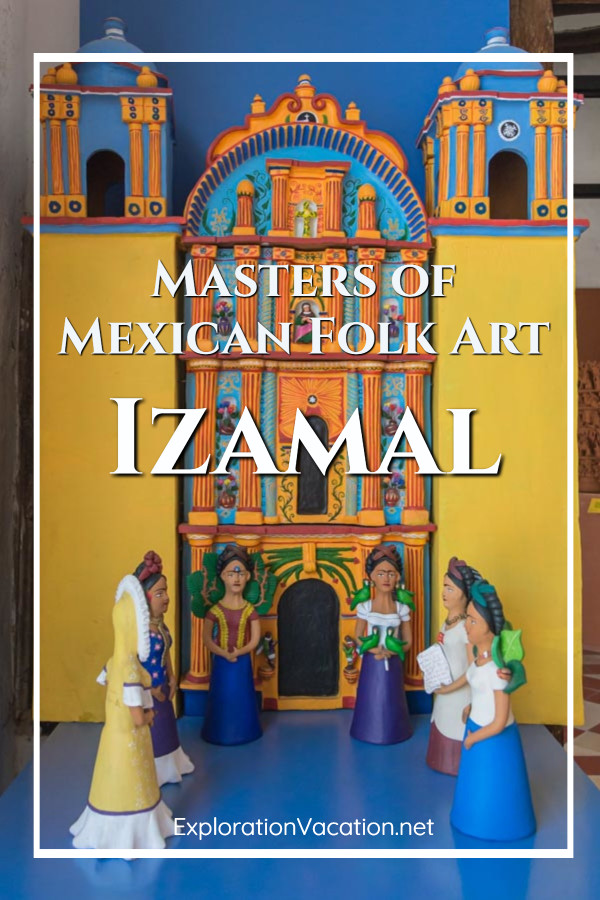 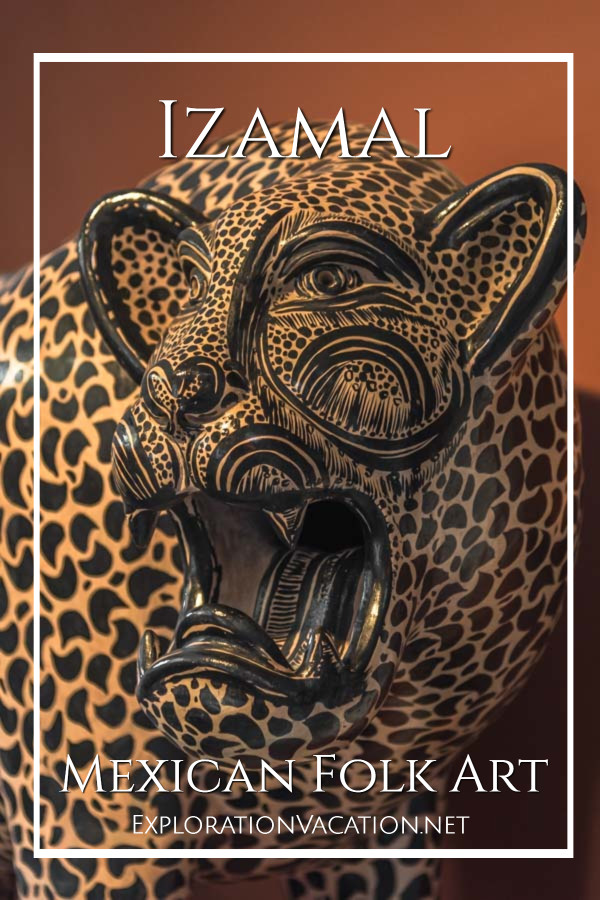 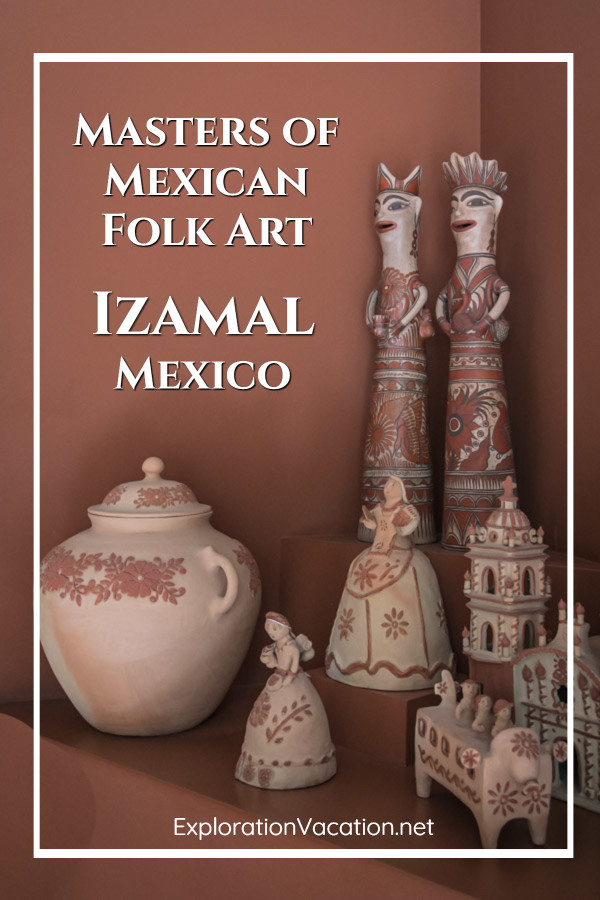 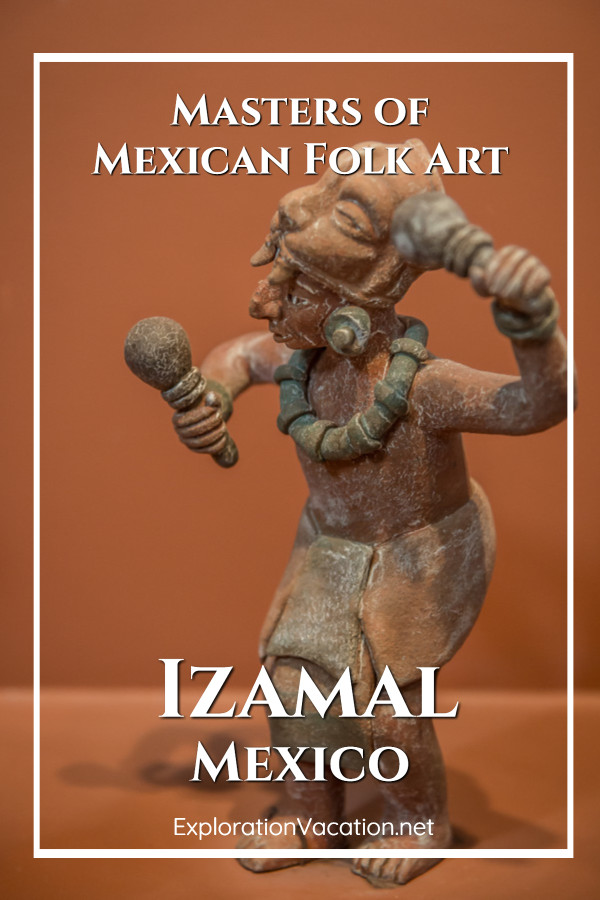 2 thoughts on “A folk art wonderland in Izamal, Mexico”