Having learned that a herd of wild horses roamed not far from our Airbnb near Arizona’s Superstition Mountains, we headed out early a couple of mornings to see if we could find them. This was a no-fail proposition for me: The Salt River horses live in a fascinating landscape — I was sure to get a few good photos even if I never saw a single horse!

We started out on two days at the river around dawn, but didn’t find any horses there. I think we might have just missed them!

But the horses weren’t hard to find, as each day there was a (different) group grazing in the cactus-filled meadow just beyond Salt River Tubing’s enormous parking lot.

The horses appeared to be acclimated to their human spectators, at the same time ignoring them and subtly moving away from them as they grazed. 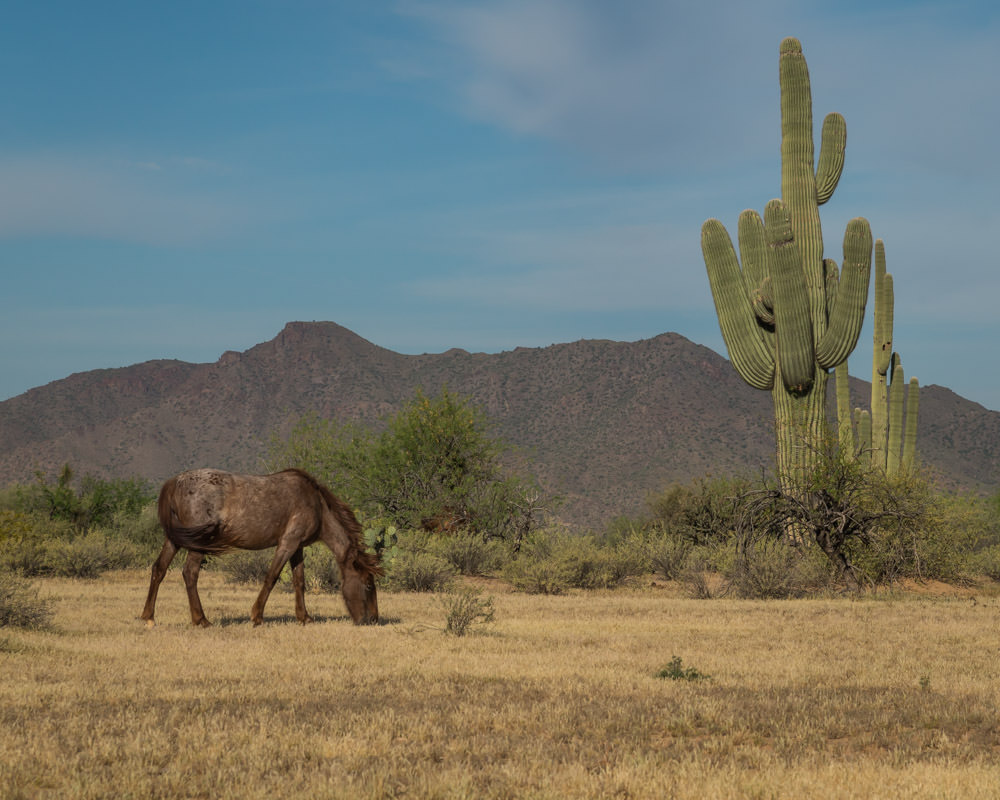 The horses were beautiful, but I particularly enjoyed watching the foals. (There was one in each of the groups we saw.) Not only did they have that irresistible baby-animal cuteness, but they were more active than the rest of the herd since they weren’t focused on grazing. My favorite was one that kept scanning the area and repositioning itself in an attempt to keep the mare firmly between it and the closest photographer! 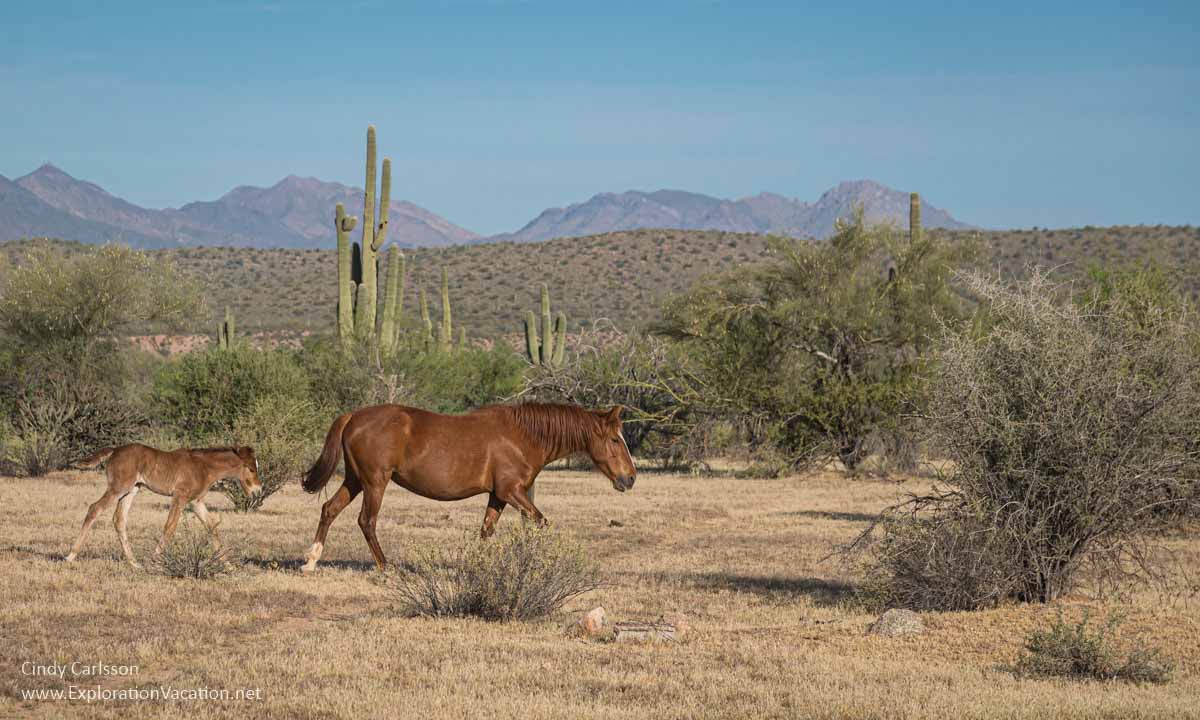 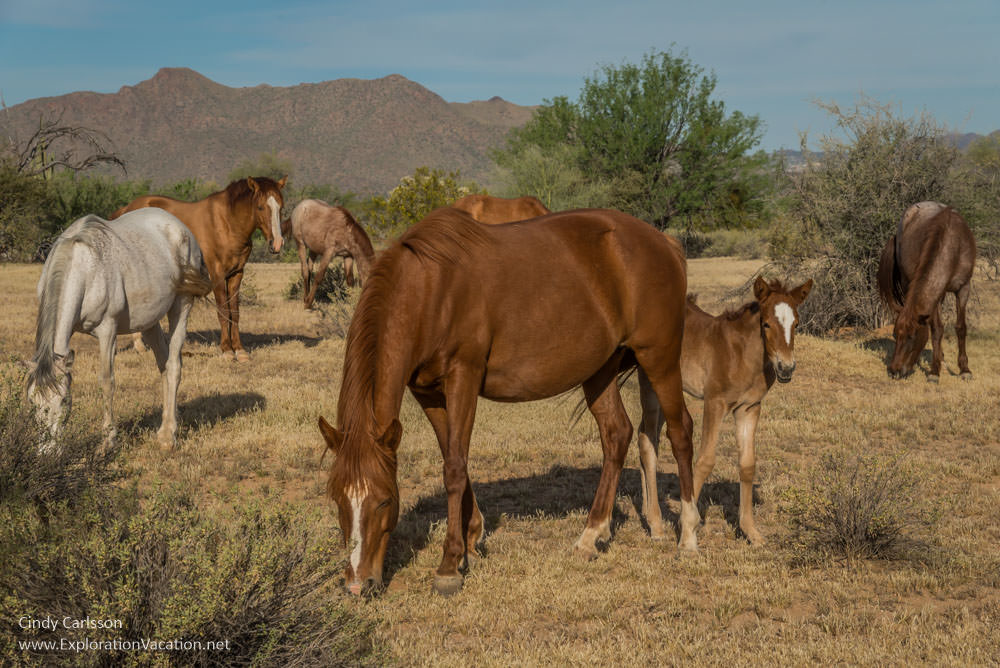 (You could get nice pictures if you moved away from the other photographers.  . . and then waited.)

I’m sure it’s only a matter of time until this little one is comfortable with people milling about. That’s probably a good thing (even for a “wild” horse), as these horses aren’t a local secret anymore. They’re a popular attraction, especially in summer, when seeing them is often the highlight of a day spent floating on the river. They are also at the center of a controversy not just about what will become of them (a proposal to remove them was put on hold late last year), but about who decides how these public lands – and the creatures living there – will be managed. It’s a lot of attention.

For the time being, the horses continue to roam where visitors can watch them cool off in the river and graze amid cacti in the dry meadows, but there could be a long hot summer ahead.

While there are around 100 horses in the Salt River herd, they are generally found in smaller groups around the Salt and Verde Rivers. They often can be seen near the Bush Highway; we found them along the Usery Pass Road between the Bush Highway and the (closed) parking area at Goldfield recreation area. Other sites worth checking include Granite Reef, Phon D Sutton, Coon Bluff, Blue Point, Pebble Beach, and Water Users recreation areas. (A Tonto Pass or a National Park Pass (America the Beautiful Interagency Pass) is required to park at any of these sites.) The horses are also often seen by those taking a canoe, kayak, or inner tube down the river. In all cases visitors should keep plenty of distance between themselves and the horses and never touch, harass, or feed them.

The “wild” horses along the Salt River either weren’t here or were identified as branded stock (there’s lots of disagreement over this) in the early 1970s when the law protecting wild horses on federal lands was passed. This means they don’t have legal status as federally protected wild horses. (To be clear, the USA doesn’t have “native” horses – “wild” mustangs and the other horses used by Native American tribes were descended from horses brought by the Spanish and are protected because of their cultural significance.) For its part, the US Forest Service, which is responsible for much of the land on which the horses roam, views the Salt River horses as “unauthorized livestock” and made plans to remove them last year. (Cattle were removed from the area in years past as part of an environmental protection effort.) Those removal plans ran headlong into activists who want the horses to stay, some of whom object to any management of the herd. Now the Arizona legislature is also stepping into the fray.

Of the activist groups involved, the Salt River Wild Horse Management Group occupies the middle ground, doing what it can to monitor, manage, and study the herd while advocating for the horses to remain wild, but managed.

A good overview of the situation – and the positions of all the players – can be found in “What’s next for the Salt River horses?” in AZ Central. The New York Times also describes the situation in “Threat to Arizona’s Salt River Horses Spurs New Battle Over Western Lands.”