Once again I am leaving here with regret, leaving without being able to capture the essence of this place. I know my pictures will have an odd green-gray cast to them that I will mostly removed because – while the camera probably is registering the light correctly – what I remember is a an impressionistic mélange of color floating in a sea of gray. (I see no reason to believe a camera is more truthful than memory.) Similarly, while I know this is a city of grime and pollution, poverty and crime, ever-expanding shanty towns, crumbling buildings, and streets choked with cars; it is also a city of beautiful parks and enticing views of the sea, lively and gracious people, vibrant neighborhoods, unexpected architectural delights, and ribbons of green boulevards with space for those on foot or bike. . . and then there is the food, some of the best and freshest seafood to be found anywhere.

I wish I could spend a month here and then – maybe, just maybe – I’d begin to understand this crazy, beguiling city. 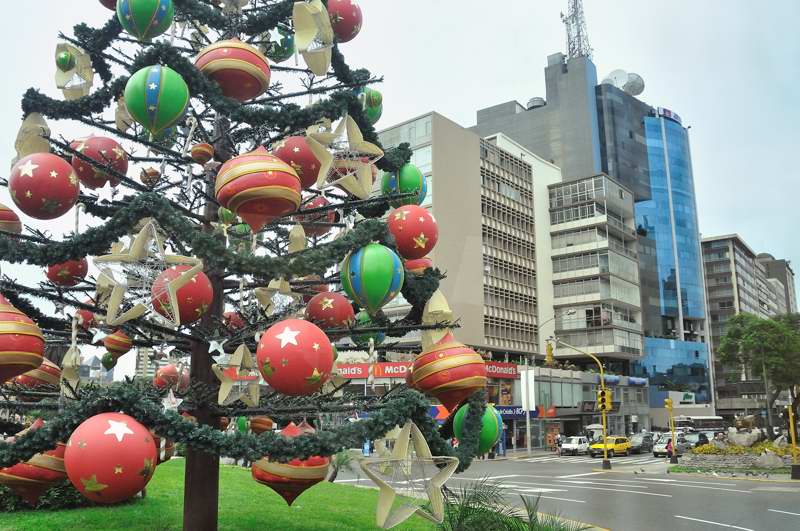 As noted, Lima’s 8.2 million residents live in 43 districts, as well as the illegal slums that flow along the valley’s edges and spill into the surrounding desert. It is a very large, very complex place.

This UNESCO World Heritage Site is looking better than it has in years, as efforts to make the area safer, cleaner, and more beautiful underway for the past decade are showing signs of success. The city just looks better than it did even a few years ago. We see beautifully restored buildings and on-going renovation projects throughout the city, but especially in the historic center.

However, there is still a lot to be done. When – and whether – that will occur seems uncertain.

Driving through the financial district (just a few blocks off Plaza Mayor), we asked Able what was located on upper floor(s) of the beautifully restored buildings around us. His simple answer, “nothing,” cuts to the heart of the problem. Lima has a treasure trove of wonderful two-three story historical buildings, but these buildings are expensive to maintain, let alone fully restore, and this is a city that experiences earthquakes on a regular basis, requiring a building be made earthquake proof as well, if the upper floors are to be inhabited. This is a very costly proposition, especially in a poor country like Peru. In a city where the demand for these buildings is limited, it is hard to believe that investments on the scale needed will be made any time soon. For the foreseeable future, the best one can probably hope for is just enough investment to keep the best buildings from simply collapsing.

But maybe that is too pessimistic. Renovation and reuse – in various forms – is happening.

And the city has been looking for other ways to fund these needs too, for example, the “Adopt a Balcony” program that has led to the restoration of many of the cities distinctive balconies in and near the historic core.

Lima’s balconies (a Moorish tradition carried to the new world by way of Spain) are almost an icon of the city – it is hard to imagine Lima without its distinctive balconies – so I’m hopeful that many of these intricate structures will somehow survive into the future.

I’m also hopeful that renovation and revitalization will continue here – it certainly is a place worth saving. So, if any of you are looking for some historic properties in which to invest and then hold for a decade or so, central Lima might be the place for you.

What does poverty look like anyway?
I’m still shocked to be in a tour bus somewhere and hear someone talking about the horrible poverty and wondering how anyone could live in such an awful place – only to look out the window and realize they are referring to middle- or even upper-income housing. Wow.

Rich or poor, few people in the world live like Americans and few Americans (even those who travel outside the United States) seem to really get that. Housing in Peru and Ecuador or Cambodia or Egypt or even Europe generally looks very different from that of most middle-income or wealthy Americans. . . but different does NOT mean poor.

While there is a lot of poverty in Lima and there are “slums,” much of the hodge-podge of development falls into a category maybe is best described as informal development. Things get built, they get built where there is space, in a form that fits that space, on a timeframe and to a standard that is affordable to the builder. Like my own neighborhood, poverty is often tucked in between everything else and – in a country where the visual clues are unfamiliar – it is often difficult to tell which is which.

The informal settlements that sprawl out from edges of Lima (which may or may not be slums and which, have been known over time as “barriadas,” “young towns,” and now simply “human settlements”) are the result of a deliberate government decision not to plan, the consequence of deciding it was easiest to just make land available and let the poor develop it on their own. While this solved the immediate problem (and initially provided much better housing for the poor than they would have received through public funds), it wasn’t a sustainable solution over the long-term and seems to underlie much of the colossal mess the city faces today.

More information on Lima’s development through the 1990s can be found in Chapter 7 of The Mega-City in Latin America and in the Lima case study in the UN-Habitat report Understanding Slums. The informal settlements of Lima remind me very much of those in Cairo and, indeed, they developed very similarly – although in a rather different context. For information on the situation in Cairo, see the case study in Understanding Slums.

As a Spanish colonial city laid out in conformance with the Laws of the Indies, Lima has a wealth of well-proportioned plazas and a logically connected street system. But what really impresses me is how the city takes these spaces and really uses them to create a more interesting, welcoming place. Visiting again during the Christmas holidays (the same time I was here before), I again find every plaza, square, and traffic circle hosting a cheerful Christmas tree. 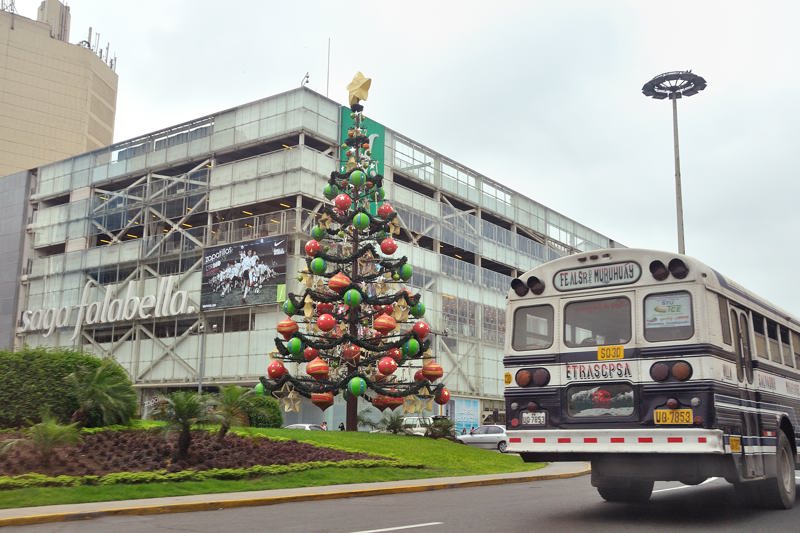 Many of these trees are decked out in the symbols of the tree’s corporate sponsor (one bears nothing but garland and cheerful red and white ornaments that say “Coke”), which adds an element of the bizarre, making the trees are at the same time, ridiculous, charming, and incongruous. I smile every time I see one.

The plazas aren’t the only open space here either. There are parks, from grand ones with many amenities (while we are visiting one features more than a dozen dramatic fountains with light shows on weekend evenings – which we try to visit but give up because of the masses of other people with the same idea) to simple grassy areas with a few bright flowers. There is green space in Lima.

The flower are another thing that always surprises me about Lima. There are relatively few flowers in private yards or flower boxes, but every scrap of ground seems to have a flower bed filled with red and yellow annuals. The same is true of the boulevards, most of which include a flower bed. Keep in mind now that, while often hazy and overcast, Lima doesn’t get a lot of rain. All of these flowerbeds must be watered regularly and the city has installed irrigation systems to keep them looking good.

I also like the fact that there are trails throughout the city that lead down to the beaches, making them accessible to the rest of the city. (I won’t guarantee their safety though.)

Overall, the sense is that a bit of beauty is made available to everyone, rich or poor. Throughout the city is it seems that some small effort has been made to provide at least some small touch of grace and beauty.

The Metropolitano is coming!!

Lima is noted for having horrible traffic congestion and a totally erratic transit system (although recent studies apparently indicate that the transit system actually serves its customers quite well). None-the-less, the big thing in Lima right now is the Metropolitano, the BRT (bus rapid transit) system currently under construction, and whether or not it will have any impact on Lima’s endless traffic congestion.

Despite the official talk to the contrary, it seems unlikely that the extension of Lima’s Metro into the heart of the city will ever happen. Besides the cost, the complications involved in tunneling under Lima seem too enormous to imagine.

Traffic IS pretty horrible in Lima, but there are also roadways with designated bus lanes and/or bike lanes and there are regular well-marked pedestrian crossings at signalized intersections. There are even pedestrian streets that are closed to vehicular traffic – all of which seemed to be lively and well-used public spaces. It’s not a city I would want to drive in, but getting around on foot is pretty manageable.

Lima does have regular US style gas stations, but these look really convenient and seemed to have limited impact on traffic flow. They are probably common, but this is the first place I’ve seen them.

I’m sure these exist in other places too, but I’d never seen a curtain-glass style buildings where you could actually open the windows. (I’m sure architects hate them, because the open windows break up of the building’s line, but I find them both really amusing and totally practical.) I hope this a trend that is spreading . . . in most places, most of the time, you don’t need air conditioning if you can just open a window.

Land is in short supply for everyone

Peru is a very traditional Catholic country, so cremation isn’t a very popular option. With land for anything in short supply, most cemeteries have massive ”high-rise” blocks for above-ground interments.

While urban blight is largely in the eye of the beholder, I did find plenty of candidates throughout Lima. . . including American fast food restaurants, big box stores with seas of parking, and lots of weirdly glitzy casinos (apparently Peruvians are really big on casinos).

Web links on urbanity and urban form in Lima

There is a lot of fascinating information on Lima. Here are – in no particular order – some of what I found:

Ok, so Lima is an urban planning disaster with boring weather and acres of crumbling historical buildings that will probably turn into dust the next time a big earthquake gives the city a good shake. I don’t care. It is an alluring, truly fascinating, crazy city of delightful surprises.

It just keeps calling to me.

Are you familiar with Rakuten, the online shopping app that gives you cash back when you make a purchase? Did you know you can use Rakuten for travel bookings? Well, you can! END_OF_DOCUMENT_TOKEN_TO_BE_REPLACED