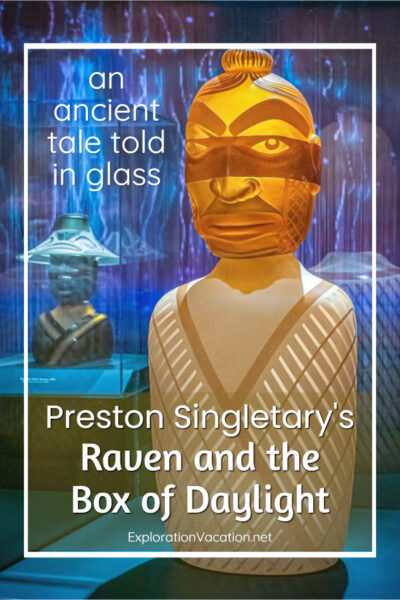 Native American artist Preston Singletary brings the ancient Tlingit story of Yéil, the raven who brought light to the world, to life in “Raven and the Box of Daylight,” a glowing exhibit of glass, music, and light.

Once Yéil (Raven) learns who has the box of daylight, he becomes human in order to steal it and release the light into the world. Koowdzitee (Raven Birth) in front of Nass Héeni (Nass River) – glass sculpture by Preston Singletary.

“Raven and the Box of Daylight” (“Yéil ka Keiwa.aa”) is on exhibit at the National Museum of the American Indian in Washington DC through January 2023. After that, the exhibit moves to museums in Virginia and Oklahoma.

The exhibit in DC brings Raven’s story to life in rich, glowing color through more than 70 glass sculptures, original music, the Tlingit language, and projected light. It’s an immersive experience that transports viewers to a distant time and place.

All quotes used here are from storyboards in the exhibit.

Walk through the story of “Raven and the Box of Daylight”

Singletary’s telling of Raven (Yéil) bringing daylight to the world draws on five versions of this traditional Tlingit story. All explain how Yéil “stole” the light and released it into the world, but each has unique details that Singletary wove into his own version of the story.

The exhibit begins with Raven.

Before here was here, Raven was only named Yéil.

He was a white bird and the world was in darkness.”

Yéil decides that he will try and do something about the darkness, for himself and for the world.”

Along the Nass River

As he follows the Nass River, Yéil encounters the Fishermen of the Night. . . the Fishermen greet him with their paddles standing straight up in welcome.”

The Fishermen tell Yéil of Naas Shaak Aank-áawu (the Nobleman at the Head of the Nass River): that he is a wealthy man, that he and his family live in a house filled with wealth, and that he has a beautiful daughter who drinks from the river every day. They tell Yéil the man has many treasures in his Clan House, including beautifully carved boxes that house the light”

But getting into the clan house – and getting access to the box of light – will not be easy.

Yéil knows he will not be welcome in his raven form and devises a plan to transform himself to a tiny speck of dirt. His plan is to float down the river into the drinking ladle of the young woman, Naas Shaak Aank-áawu du Séek’ (Daughter of the Nobleman at the Head of the Nass River). That is how he will sneak into the Clan House.

Yéil turns himself into a piece of dirt and falls into the water. He floats into the young woman’s ladle as she dips it into the river for a drink. Her servants test the purity of the water by dipping a feather plume into the ladle.

Yéil in dirt form is discovered and thrown away.”

Héen Alts‘ak (Feather Pulled Through Water) with a drop of water containing Yéil (Raven) in the form of a speck of dirt. [hot-sculpted and sand-carved glass]

“Yéil notices the color of the ladle is similar to the color of hemlock boughs. On his second try, he transforms himself into a hemlock needle and floats into her ladle again.

Yéil is ingested by Naas Shaak Aank-áawu du Séek’ and she becomes pregnant with Yéil. The family questions the Immaculate Conception, but ultimately accepts it.

When it is time for the young woman to give birth, the servants line a shallow pit with fine furs in preparation for the high-ranking baby to be born. Naas Shaak Aank-áawu du Séek’ struggles and cannot give birth. A wise woman is summoned, and she notices the fine furs. She knows the finery is making the birth difficult and orders them removed. The furs are replaced with a more humble lining of moss and Old Man’s Beard from the trees, and Yéil T’ukanéiyi (Raven Baby) is born in human form.”

In the Clan House

Yéil T’ukanéiyi grows into a precocious and precious human boy.”

Traditional Tlingit clan houses were both social and residential spaces. This is where the clan leader lived with other family members from the same maternal line. But it is also where all clan members attended ceremonies and participated in other events. (Today Tlingit families live in separate houses and the clan house is only used for community functions.)

The clan house area in the “Raven and the Box of Daylight” holds examples of the items a wealthy clan leader would keep. It houses practical items like baskets and fishing gear, but also ceremonial clothing, rattles, and masks.

Inside the “clan house” where N aas Shaak Aanḵáawu (Nobleman at the Head of the Nass River) stores his wealth.

Yéil K’átsk’u (Raven Boy) is the beloved grandson of Naas Shaak Aanáawu (the Nobleman at the Head of the Nass River). Naas Shaak Aanáawu spoils him, giving him all he asks for; his grandfather cannot deny him. Even though he is given everything he desires, he tires of being a human and decides it is time to leave.”

An eagle rattle, baskets, and other items sculpted from glass fill the clan house in “Raven and the Box of Daylight.”

Boxes that hold the sun and stars glow in the darkness of the clan house. [Kiln-formed and sand-carved glass with neon lighting]

Yéil K’átsk’u asks for the boxes and is told he cannot have them.

He cries and cries for the box of stars and eventually his grandfather relents. Naas Shaak Aank-áawu gives his grandson the box of stars, which he immediately opens. The stars slip through the smoke hole in the Clan House and take their places in the sky.

Naas Shaak Aank-áawu du Séek’ (Daughter of the Nobleman at the Head of the Nass River), the boy’s mother, does not think her son should have the box and she argues with her father. As they argue, Yéil K’átsk’u opens the box. He plays with the moon and then releases it. The moon silently slips through the smoke hole and takes its place in the sky.

The sun is the final treasure. Naas Shaak Aank-áawu protects it fiercely, but Yéil K’átsk’u eventually succeeds in releasing the daylight.”

Keiwa.aa Lákt (Box with Daylight) glows from the light of the sun stored inside. [Kiln-formed and sand-carved glass with neon lighting]

A World Drenched in Daylight

As the stars fill the sky and as the moon takes its place, light begins to fill the earth.”

Daylight fills the sky as birds swoop above a village of glass figures with representations of animals, sea life, birds, and humans.

When the sun takes its place in the sky, bringing daylight to the world, it is frightening to all those who have been in darkness. The people are able to see the world around them for the first time and are startled.

Xeitl Ḵáa (Thunderbird Man) as the moon brings light to the night sky and Raven makes his escape. [Blown, hot-sculpted, and sand-carved glass]

Those who remained strong (and stubborn) become Human People.”

Yéil (Raven) decides it is time to leave and transforms back into bird form.”

Dieit Yéil (White Raven) takes the form of a bird again as he prepares to leave. [Blown, hot-sculpted and sand-carved glass]

But escape isn’t that easy and Raven pays a price for releasing light into the world.

Naas Shaak Aank-áawu (the Nobleman at the Head of the Nass River) is devastated that his treasures have been released into the sky. He is so angry that he gathers all the pitch in the Clan House in a bentwood box and throws it into the fire. He catches Yéil as he tries to escape out of the smoke hole and holds onto his feet.

Raven is covered in the soot and smoke of the fire. He is transformed from a spiritual being into the black bird we know today. His color marks his sacrifice; his physical form is forever changed for bringing light into the world.”

Who is Preston Singletary?

Preston Singletary grew up in Seattle, so perhaps its not surprising that glass became his medium for exploring Tlingit culture. Of course, since he’s from Seattle, he’s also a musician who cofounded the Indigenous band Khu.éex’ and created the music and soundscapes for “Raven and the Box of Daylight. He claims he’s “a musician trapped in a glassblower’s body.” (American Indian magazine.)

His career in glass seems to have begun almost by accident when a teenage friend helped him get a job doing simple production glass work at Glass Eye Studio. (One of my favorite sources for blown glass Christmas ornaments.) His talent must have been apparent early on, because he soon went on to Pilchuck Glass School and then assisted some of the masters of contemporary art glass – folks like Dante Marioni and Lino Tagliapietra (two of my favorites). But he took the classic European techniques he learned and used them to explore Tlingit imagery and ideas.

Glass isn’t a traditional material for Native American artists. Back when I used to regularly visit Northwest Coast galleries, Singletary and Canadian Coast Salish artist Susan Point were about the only glass artists I’d see displayed. Today it’s a lot easier to find fabulous work by Indigenous artists using glass and other non-traditional materials to explore traditional theme. Singletary helped make that change happen through collaborations with native artists from North America and across the Pacific. But his own work still stands out – as is obvious from “Raven and the Box of Daylight.”

Singletary is still based in Seattle. But his art is found in public collections in Europe and across the USA.

Where to see “Raven and the Box of Daylight”

This exhibit was first shown at the Museum of Glass in Tacoma, Washington. It’s at the National Museum of the American Indian through January 2023. But you’ll have a couple opportunities to see it after that.

Remaining exhibitions of “Raven and the Box of Daylight:”

I’d be surprised if more venues aren’t added in the future. However, don’t wait for that to happen. This is an exhibit well worth traveling for! 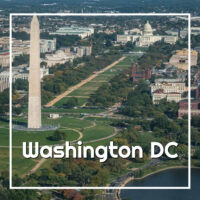 2 thoughts on “An ancient tale told in glass: Preston Singletary’s “Raven and the Box of Daylight””

Are you familiar with Rakuten, the online shopping app that gives you cash back when you make a purchase? Did you know you can use Rakuten for travel bookings? Well, you can! END_OF_DOCUMENT_TOKEN_TO_BE_REPLACED