It is still mid-morning when we arrive at the hotel (which is gorgeous) and our rooms are not yet ready. Our itinerary leaves the rest of the day open, but no one wants to “waste” this afternoon just hanging out at the hotel. There are ruins to see!

Choeun explains that our itinerary doesn’t include a tour of Angkor Wat itself – that is an extra charge. We howl in protest. (Later I’ll see why it probably isn’t included in the basic package.) Choeun agrees to add it, but instead of doing it this afternoon, in the heat of mid-day, he recommends that we rearrange our itinerary to spend this morning touring the floating villages on Tonle’ Sap and then do Angkor Wat tomorrow morning when it will be cooler and less crowded.

So we are off!

After a short drive we arrive at a rather rustic boat landing where we board a roomy, brightly painted motor boat. It is as comfortable as any boat as we have been on thus far, although Joe (the responsible one in the group) notes the lack of life jackets, checks to see who can swim, and asks that we look out for David if anything happens.

He needn’t have worried. The boat is stable and the lake smooth – even the wake from the few other boats doesn’t create much of a disturbance in the mostly shallow water. 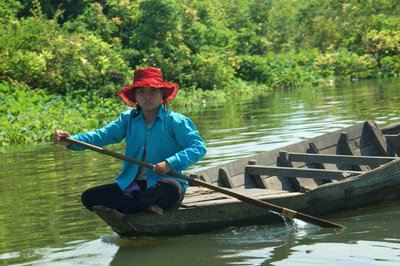 Choeun provides us with background on the lake’s ecology and culture, explaining that Tonle’ Sap is the largest lake in Southeast Asia, filling and expanding during the wet season and then contracting until the rains again swell the Mekong and refill the lake. Drainage in this area actually changes direction with the season. It is an odd and beautiful place that hosts a number of floating villages.

While some structures along the lake are permanent ones built on stilts, most actually float, forming villages that change location with the season and the changing water level. When it is time to relocate, these floating structures are simply towed to a more favorable location.

The village we pass through includes homes, stores, schools, a church – everything you might find in any small village. Fishing nets and supplies are piled everywhere. “Fenced” areas corral farmed fish, isolating them from the rest of the lake. TV antennas bristle everywhere.

We are here during the afternoon siesta, so there is limited activity in the homes and businesses we pass. Children splash and play in the murky water, but most often we see people napping in their hammocks or mending nets. A few enterprising business people are also out making sales.

Most of the people living here are Vietnamese who have been displaced by war. They survive and sometimes thrive by fishing this lake. The government of Cambodia allows them to live here and to do sustenance-level fishing in some areas, while charging a fee for fishing in the main lake where most commercial fishing occurs.

What we don’t see are birds or wildlife of any sort.