The Temple of Amun was the center of the ancient Egyptian world, a complex devoted to the god who was the creator of the universe and all things living and being. Here, in this temple, the universe was preserved through the actions of Amun’s beloved son, the pharaoh.As the most important religious site in ancient Egypt, the complex at Karnak was regularly remodeled and expanded for 2000 years, each pharaoh either building upon the work of his predecessors or demolishing it and building anew. It makes for an awesome confusion of structures, stray stone, and monumental sculpture.

We arrive at the first pylon, the protective wall that also served as an entry to the complex, in the blinding light of early morning.

We reach this entrance by passing through a broad walkway (once a grand causeway) watched over by dual rows of stately crio-sphinxes (creatures with the body of a lion and the head of a ram). There are dozens and dozens of them, each bearing the figure (or remains of a figure) of a pharaoh.

Inside I find a large open courtyard. On one side is what appears to be a small, three-roomed temple. This is the boathouse (as it were) of Seti II, the three rooms built to contain the sacred barques of Mut, Amun and Khonsu as they made their ritual journeys.

To the right crouch the remains of a row of rams. They mark where the ancient causeway, by which I entered the temple, once continued onward.

Also to the right are the remains of a small temple of Rameses III.

At the far end of the courtyard are large carved figures and the second pylon – another massive entrance that will take us into the heart of this part of the temple.

I’m trying to concentrate on Romani’s history lesson, but I am distracted by a colossal statue of Ramses II with a lovely little statue of a female figure at his feet.

Who was this, clearly beloved, woman?

Actually, there are lots of things here that distract me. Take the walls themselves, which are deeply carved with the stories of ancient Egypt. They speak to those who know how to read them.

We move through this entryway, which provides only a hint of what lies beyond.

Once inside, I am left gaping at the magnificent Hypostyle Hall.

I feel as if I have enter a primeval forest of giant columns.

Indeed I have, as there is a forest’s worth of them: 134 in all, some of which reach 80 feet in height. Each is carved, like the walls, telling stories directly from the ancient past.

At the very top, framing remains from the clerestory windows which once sat directly below the roof and provided the only natural light to enter this space.

It’s hard to imagine what it would have been like here when the paint was clear and bright and the roof blocked out the harsh light of the sun. The murky light must have increased the sense of mystery and awe experienced by the ancient people who used this space. It is simply amazing.

From here we move out to an open area between the third and fourth pylon, the Obelisk Court of Amenhotep III. It provides a good vantage point for observing the area we have just left.

This is sort of an odd space, tightly confined, but with lower buildings on one side and a vast open area beyond. There is lots to look at.

Romani gives us a lesson on the art of carving and installing obelisks, with David providing visuals.

I have never understood why obelisks are such a big deal, never thought about how difficult it must have been to cut, transport, and erect these gigantic delicate spears. Wow. Now I get it.

There are lots of things in this area to distract me, but the main reason we have stopped here is to view the remaining obelisks. Among them is what is claimed to be the largest standing obelisk in Egypt, spear reaching almost 100 feet into the sky. It was erected by Hatshepsut and later partially walled up by her successor, Thutmose III, in an unsuccessful attempt to hide it after he was unable to destroy it – perhaps acting on pent up rage after 20 years spent watching his stepmother rule as pharaoh in his place. At any rate, the obelisk still stands today. It is an amazing piece of stone.

From here we move to a large open area near the sacred lake.

The view from here is expansive, encompassing the “back” half of the temple complex as well as smaller surrounding temples. 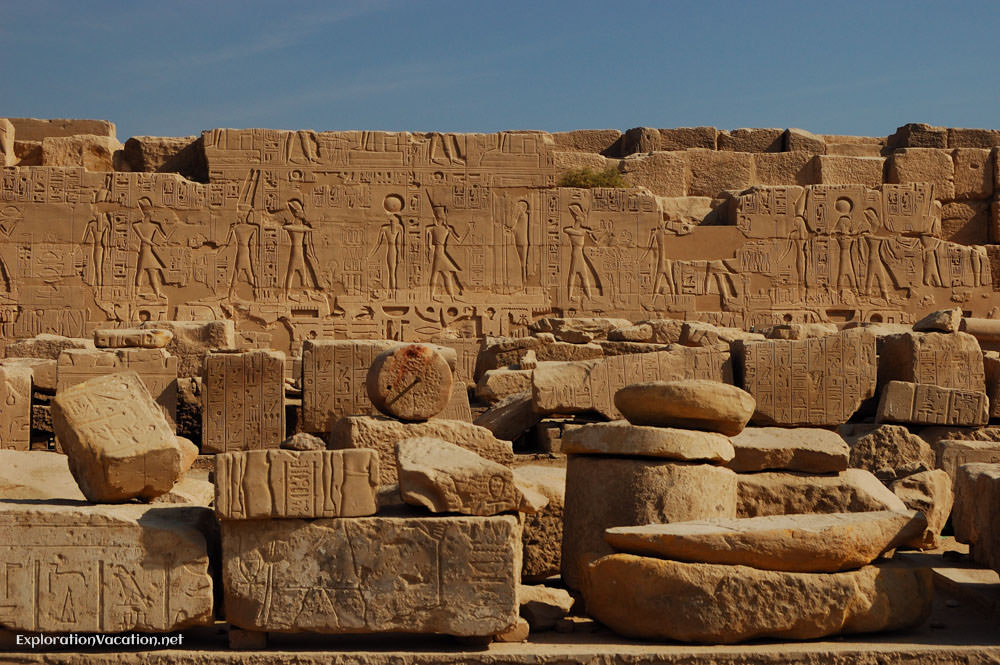 A variety of archaeological and restoration projects, ranging from the gargantuan to the minuscule, area also visible if one looks around a bit. 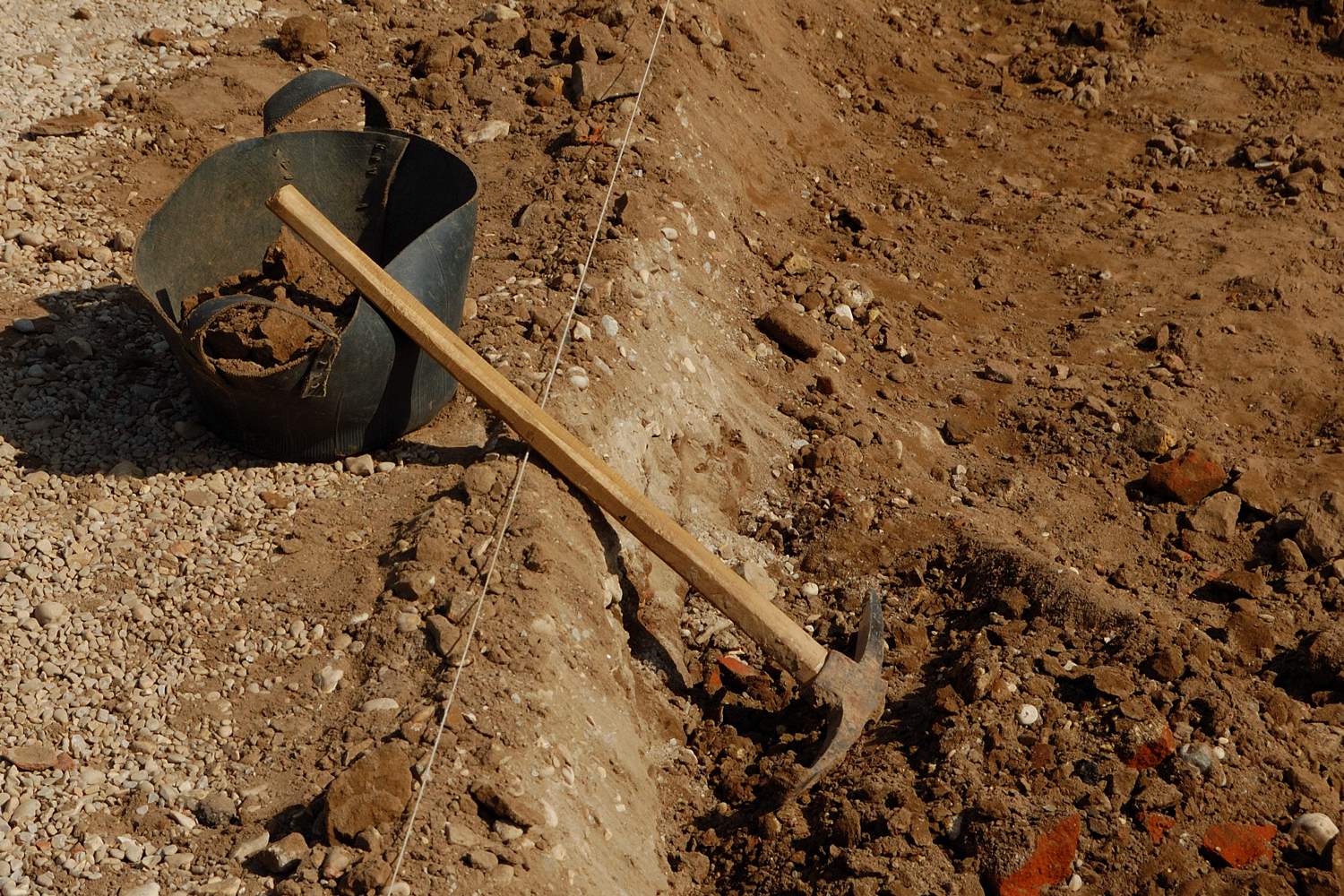 Our formal tour ends here, but we are given a little (far too little!) time to explore on our own.

I head back toward the far end of the temple, entering it from the very rear. This brings me into a warren of dimly lit rooms. The organization of the rooms seems chaotic and disorienting, but soon I find myself in the midst of a stand of brilliantly painted columns: The Festival Court of Thutmose III. It is so very beautiful.

I have no idea where I am back here. Searle, Lynn and Paul, and others are also wandering through this area, so I can join one or another for awhile and then move on without any clear goal or purpose. The small covered rooms are dimly lit, although many have intricately carved and painted walls. 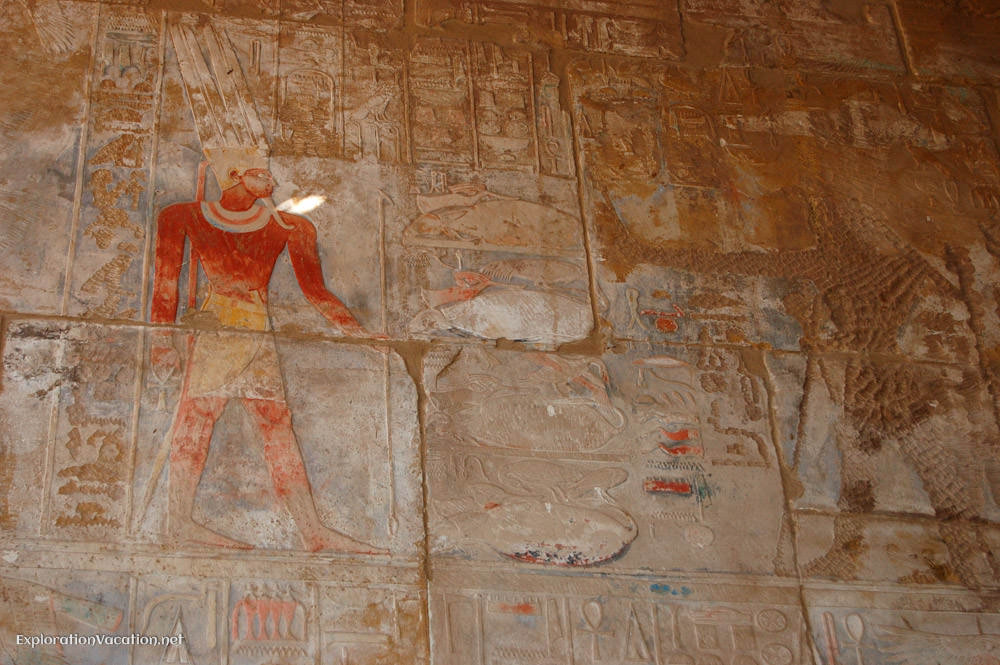 I wish I knew what they were trying to tell me.

Back in the sunshine, a number of us end up at a small shrine featuring what looks like a large crucifix.

We ponder it. It seems odd and out of place, although there are occasional signs throughout this complex of Christian occupation. Was this once a Christian chapel? (Apparently it is not Christian at all, but is simply a fragment of a carving of the king flanked by two deities.)

I am slowly working my way back toward the Hypostyle Hall, just visible beyond the obelisks framed by the jumbled ruins of the Middle Kingdom chapels in the Central Courtyard. The view changes with every step. 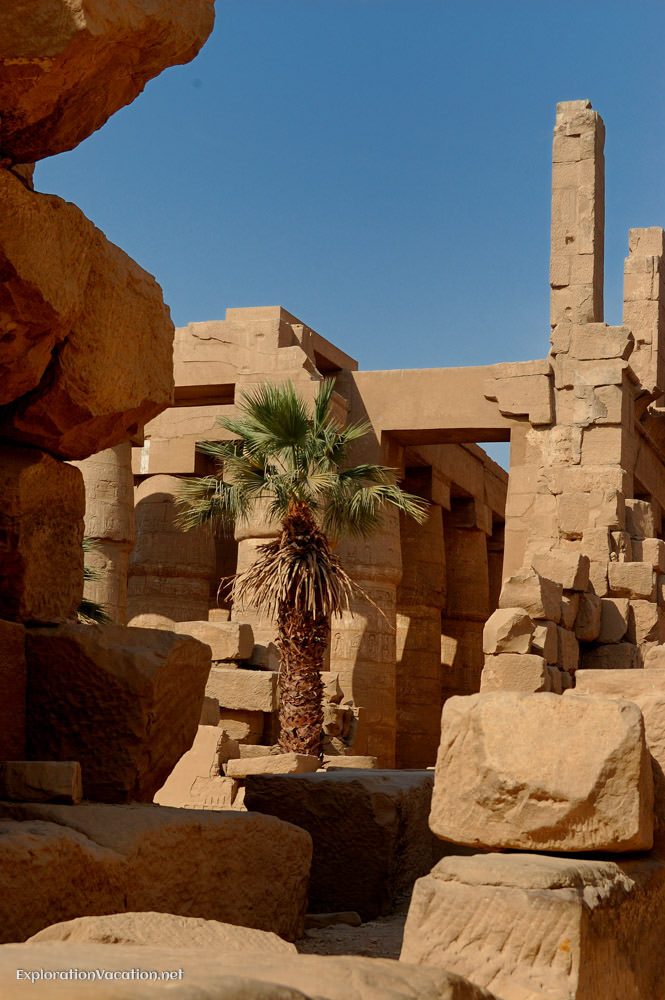 Amun watches over me as I make my way to the entrance, hurrying now, as my time here too quickly comes to an end.

Are you familiar with Rakuten, the online shopping app that gives you cash back when you make a purchase? Did you know you can use Rakuten for travel bookings? Well, you can! END_OF_DOCUMENT_TOKEN_TO_BE_REPLACED