We have agreed to start the day at 7 a.m., as Choeun suggests this will give us a bit of a break from the worst of both the heat and the other tourists.

It’s easy to get up early, with a glorious sunrise just beyond my deck. 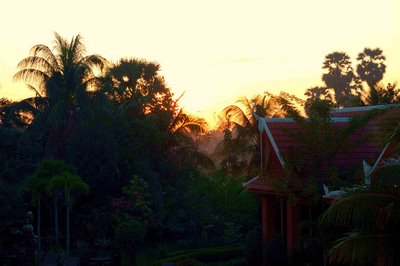 Angkor Wat is touted as the world’s largest religious monument.

It was constructed early in the 12th century as both the capital and a temple dedicated to the Hindu god Vishnu. As such, it represents the Hindu universe recreated in soil and stone.

The temple’s basic design consists of a three-level pyramid, each level enclosed by a gallery with corner towers, and the summit finished with five towers representing the peaks of the mythical Mount Meru.

We enter the temple itself from one of the minor gates, at the north or east. A little warm-up to the main attraction. (We will discover later that the main gate is far, far grander.)

The temple is immense, its size such that it is hard to comprehend it as a whole.

We cross the now-open yard (originally the temple was in the midst of a royal city) and enter at the East Gallery. The entrances to the temple are grand, designed in part to match the scale of the rest of the temple and in part to accommodate the arrival of royalty by elephant.

Inside, we start our tour in the south wing, which features a mural detailing the story of the “Churning of the Sea of Milk.” This immense mural portrays the gods on one side and the demons on the other pulling on a giant naga – working cooperatively for the moment in order to churn the sea to produce the elixir of immortality. (The gods will eventually find a way out of the agreement they have struck with the demons.) The complicated bas-relief carving is amazing in its detail, beauty, and sheer scale – 160 feet in length.

Choeun leads us slowly along the mural’s length, translating the images and telling the story as we move along.

Ravana leads the gods, holding the head of the naga, his army close at hand.

The gods pull from one direction. . .

Together, they churn the sea while Vishnu supervises.

All the creatures of the sea are provided in detail, from giant sea turtles to crocodiles and fish chopped into pieces by the churning.

Around the corner, in the east wing of the South Gallery, the murals change in character.

High on the first part of the wall are images of royal processions – the blessed headed to heaven.

The real focus of the mural, however, are brutal images that portray the various forms of torture found in 37 different hells. Sweet, kind Choeun explains some of the horrors pictured here. The images portray torture that is at the same time both ingenious and incredibly cruel. The carvings are detailed and intricate, but I can’t bring myself to photograph them.

The images of heaven are unimaginative and bland.

Perhaps Pol Pot is not be such an anomaly, even in a country that seems so gentle.

Farther along the murals switch to the “Procession of Suryavarman II,” which shows the builder of Angkor Wat with his army in a royal procession. The wealth and power of the Khmer empire was enormous.

From these galleries, we move up to the temple’s second level. This level features deep rectangular “pools” and lovely views up to the third level and the towers above. Like the rest of the temple, it is a beautiful space that gloriously balances intricate detail with grand architecture.

We spend only a little time here, as we are met almost immediately by an astoundingly steep staircase leading to the third level. There are people up there!

The “steps” are steep and shallow – more a decorative feature than a functional stairway. They are crowded at one edge with people clinging to a frail-looking handrail.

Choeun tells us there is another way. There is no handrail, but it is not as steep either. He looks us over, carefully considering each of us, and then tells us to come with him.

The stairway he directs us to certainly LOOKS as steep, but Choeun assures us we can get up here.

Perhaps yesterday’s climb was a test run – we worked together so all of us could get up those rather steep steps, so now he must figure we can do the same here. Which we do. There is no one else using these stairs and we arrange ourselves to ensure that there will be someone available to give a hand to those of us who need it. In most places, the wall serves as a suitable hand grip. Where it does not, the step above usually provides an adequate handhold. Where that fails, someone provides a helping hand.

At the top we are abuzz with energy. We made it! (Hey, Happy Birthday, David!)

We stop first to take in the incredible views.

As we wander about this highest level of the temple, the level once reserved for royalty, I admire the intricate beauty and delicate balance of this place. From here I can better see the design of the entire structure unfold, repeated above, below, and beyond this level. It is an amazing place.

Choeun gives us plenty of time to try to absorb this place, but it is too much. I would need days here to really have a sense of what it is all about.

Before we line up above the stairway with the handrail, Carolyn admits that she is a little afraid of heights. But Choeun takes care to get us all down safely – lining us up to wait until the upward line clinging to the handrail has dissipated, then scurrying down ahead to prevent others from starting up and blocking our descent midway. I’ve always found it much more nerve-wrecking to make a descent than any ascent, and that holds true here. I clearly could do this without a handrail, but I’m glad I don’t have to.

The handrail flexes when I pull on it.

We wander some more on the second level, passing through the “Hall of a Thousand Buddhas.” Today it houses far fewer, but many are swathed in orange and bear brightly colored offerings, making it oddly festive.

We move through the graceful and serene passages on our way out, leaving by the main entrance. It is a beautiful place.

Outside, the dramatic causeway takes us past a few smaller structures and then across the surrounding moat to the main gate.

The sun is high and hot overhead now, but the image of the temple is still amazing, almost unbelievable.