Driving from Cancun along Mexico’s Caribbean Coast isn’t difficult, but it isn’t very interesting either. It’s a modern highway with almost no development right along the road itself, leaving scrubby jungle and what seems like a million exit signs for all-inclusive mega resorts as the only “scenery” until you get almost to Akumal. When we drove this route from Cancun last November, we were more than ready for a late lunch by the time we reached this point.

While Akumal is mostly an expat beach community, it retains a lot of funky charm. Walk through the city’s entry arch and you’ll find a relaxed vacation paradise complete with swaying palms, beaches, and sea turtles.

With the sky threatening rain in the immediate future, we decided to forego the beach and start with lunch at La Cuevo del Pescadaro. The crowd was beginning to clear out, so the waiter was able to find a table for us where rain wouldn’t drip from the thatched roof or between the umbrellas. Our timing was perfect (and his skill appreciated), as rain began to pour from the sky almost immediately.

(The restaurant is near, but not on, the beach and is surrounded by gardens. Wet gardens, when we visited. You can’t tell from this picture, but it was really rainy out there!)

Apparently La Cuevo del Pescadaro is owned by fishermen, which would explain its focus on seafood. While seafood isn’t the only thing on the menu, we decided on an all-seafood meal, starting with what turned out to be a delicious ceviche appetizer served on a dinner plate! 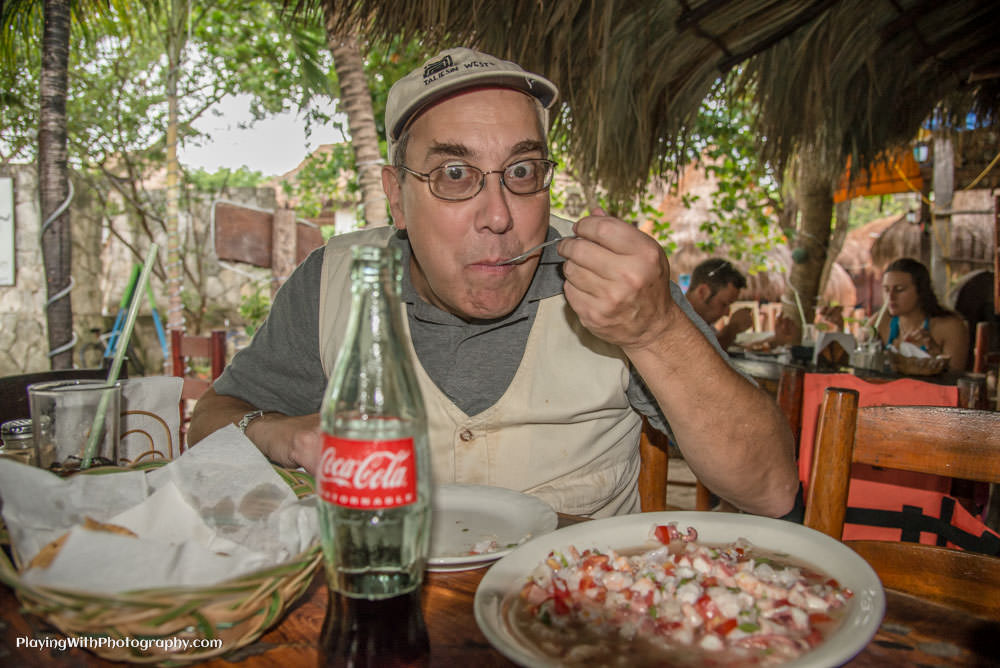 It might be the best ceviche we’ve had. It was probably the freshest. It was definitely the largest!

The rest of our meal was good too, with perfectly cooked fish. It was too much food, but this gave us an excuse to nibble on our lunch, sip a drink, and watch the rain fall for an inordinately long time.

La Cuevo del Pescadaro is located near a couple other restaurants along a little plaza just inside the archway into the city. I believe it is only a short distance to the beach, but another downpour started as we were leaving, so we never made it to the beach. The restaurant is often described as a gringo hangout, but when we were there the crowd included as many Mexicans (many of whom were also on vacation) as gringos.

Cerveza Boxes along the Street in Akumal