The Yucatán in Context

The Yucatán Peninsula, located in southeast Mexico, separates the Caribbean Sea from the Gulf of Mexico. It includes the Mexican states of Yucatán, Quintana Roo (think “Cancun”), and Campeche, along with parts of northern Guatemala and Belize. 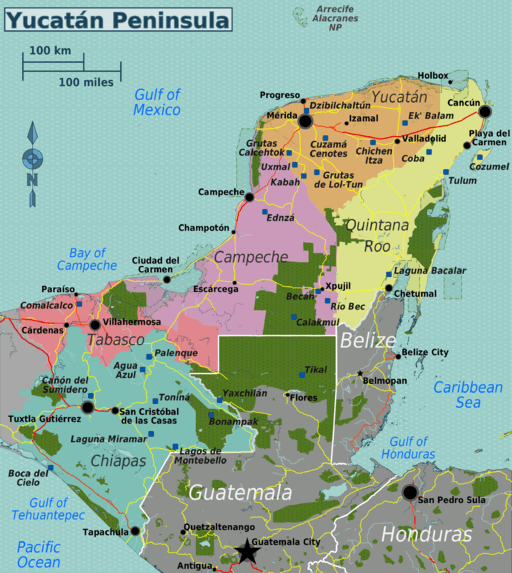 Tradition claims name “Yucatán” came from the Spanish, who misinterpreted the Mayan response “we don’t understand you” when asked what the area was called. (If so, this makes it only the first of many times the Spanish misunderstood the Maya.)

Throughout its history, the Yucatán has been relatively isolated, both politically and culturally, from the rest of Mexico.

The Yucatán has long seen itself as distinct from the rest of Mexico. The area that comprises the states of Yucatán, Quintana Roo, and Campeche became part of Mexico when Mexico gained independence from Spain in 1821. However, by 1840 the government in the Yucatán had declared its independence from the rest of Mexico. Military battles and political arguments over the status of the Yucatán continued until 1848. At that time the government in the Yucatán agreed to come under the authority of the Mexican government, although armed engagements with independence-seeking Mayans continued for another 50 years.

Until it was linked by rail to the rest of Mexico in the 1950s, the Yucatán’s only connection to the rest of the world – including the rest of Mexico – was by sea. It was far easier to travel between the Yucatán and Cuba or New Orleans than Mexico City. Isolated from the rest of Mexico, a unique culture developed and flourished. With one of the largest indigenous populations in Mexico, the influence of Mayan culture is easily observed in the region’s language, food, clothing, and architecture. But the culture was influenced by outsiders as well. While the most obvious mark was left by the Spanish, they were not the only European influence on the Yucatán. For example, the sisal boom of the early 1900s drew traders here from across Europe and, with them, the latest European styles and ideas. All of these influences came together to create the unique culture that can be found in the Yucatán today.

In fall 2014, we spent three weeks exploring the states of Yucatán and Quintana Roo. The information and blog posts linked here derive in large part from that trip.

You are familiar with Quintana Roo, even if you don’t think you are, as this is the Yucatán’s Caribbean beach playground. It is the home of Cancun and once-quaint Riviera Maya destinations like Playa del Carmen, Tulum, and Cozumel. While development since the 1970s seems determined to turn every bit of sugar sand beach into massive all-inclusive resorts, there are still areas that remain largely the realm of the fisherman who have lived there for generations. Most importantly, the Sian Ka’an Bioreserve protects over a million acres of pristine marine, coastal, and terrestrial ecosystems.

Anchored by cosmopolitan Merida, travel around the state is punctuated by architecture left by the Maya, the Spanish, and the henequen plantations – clear evidence of the varied cultures that still inform daily life in this part of Mexico. The state has nice mix of urban places, including Mayan villages where daily life has changed little over time. For those seeking nature, cenotes pierce the ground and the coastline teams with birds.

This page is under construction – check back for more info and pictures!

Are you familiar with Rakuten, the online shopping app that gives you cash back when you make a purchase? Did you know you can use Rakuten for travel bookings? Well, you can! END_OF_DOCUMENT_TOKEN_TO_BE_REPLACED

Minnesota has 76 state parks and recreation areas, with the largest concentration in the exceptionally scenic northeastern part of the state. However, there are scenic areas throughout Minnesota END_OF_DOCUMENT_TOKEN_TO_BE_REPLACED