I am so excited to be here! Like Dunluce, the last time I was here the wind was howling – preventing us from actually seeing the rather odd geologic feature we had come to visit.

Today the weather is hot and still, so I have no concerns about getting unexpectedly tossed into the ocean!

The only difficulty today will be avoiding sunburn. . . and all the other tourists!

(There were VERY few people here on those stormy days in 2004.)

While the causeway is of the greatest interest to most visitors, the headlands above it are great for hiking – so we decide to avoid some of the other tourists by heading through the Giant’s Gate to stroll around a small bay on the other side of the causeway.

The path takes us through a lush coastal meadows before winding up along the headlands. We can see the trail winding above us as far as the lookout point above Port Reostan . . . it looks enticing, but it’s hot and I’m a wimp, so we set a formation known as the Organ our goal.

The scenery along the way is gorgeous, although even on this narrow trail we somehow keep stepping into each others’ photos! 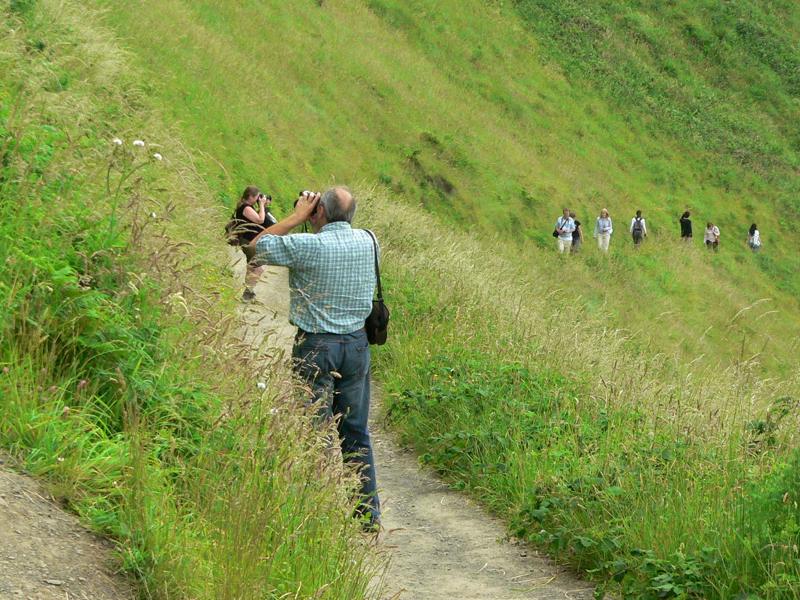 The Organ is a basalt formation similar to the one that forms the causeway itself. It’s pretty dramatic when viewed from below.

Is so beautiful up here – I really want to continue on and Andy seems eager to do so as well, assuring us we will have another lovely view when we reach round the point.

So we continue on.

While Andy and I are preoccupied with the scenery and the need to shoot into the sun to capture that scenery, Lane is focused on smaller things, like a colorful snail that I passed without seeing.

The trail here is cut right into the side of the cliff, providing close-up views of colorful rocks and lush greenery.

There really is something interesting everywhere I look.

When we reach the gate at Reostan the view changes slightly before a short walk takes us into a lovely area known as the Amphitheater. 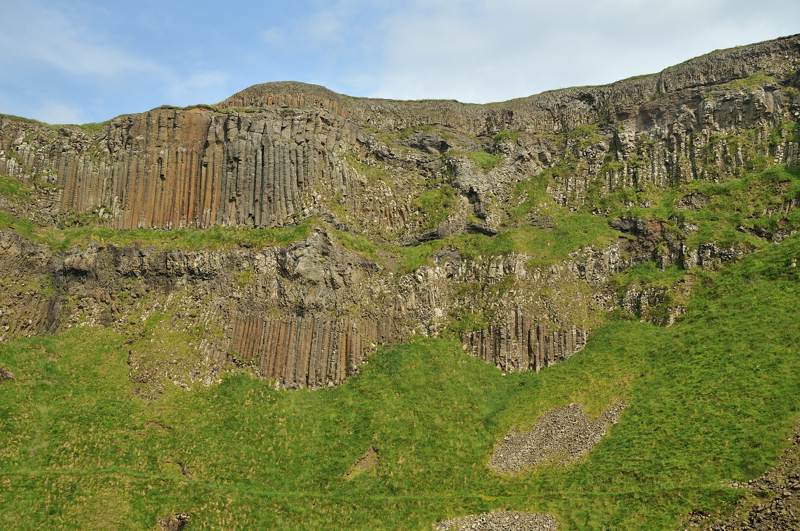 The trail beyond this point is closed after part of it collapsed, but Andy has hiked here in the past. He makes me wish we could continue on. . . but we turn and head back toward the causeway and the rest of the tourists. 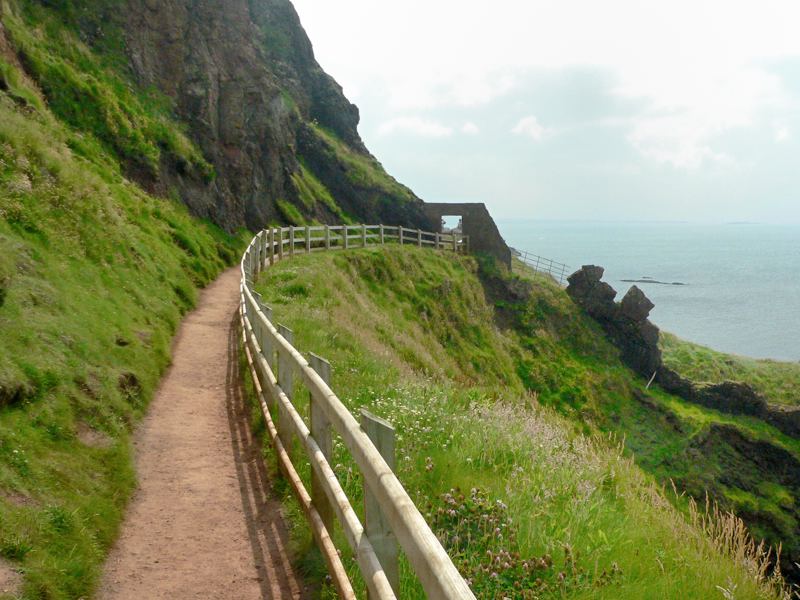 The Giant’s Causeway was built by Fionn mac Cumhail (Finn McCool) in the distant past to allow him to easily walk to Scotland to fight the giant Benandonner. However, when he reached Scotland and saw (from a distance) that Benandonner was truly gigantic, Fionn fled back to Ireland. Benandonner soon followed. To protect Fionn, his wife disguised him as a baby. When Benendonner arrived, Fionn’s wife invited him in and offered to let him sit and wait with her while she watched the baby until Fionn arrived home. One look at the size of that “baby” was enough to send Benandonner running home in fear, tearing up the causeway behind him so the Irish giant would not follow him back to Scotland.

Of course, geologists claim that these weird hexagonal basalt columns formed here due to volcanic activity 60-plus million years ago. You can choose what to believe.

There is no doubt, however, concerning the fact that there are still too many people here.

None-the-less, this is a wonderful place.

I could stay all day.

Thanks to Andy for letting me use some of his photos from our day together.