It’s raining lightly when we land in Dublin, rain that falls becomes strong and steady as we head west. Ah yes, summer in Ireland.

We are planning to stop in Athlone for lunch along the River Shannon and, just as we reach the town, the sun begins to break through the clouds. It would be a lovely place for lunch, but apparently everyone else in Ireland has the same idea – the city is packed with people and there isn’t a place to park anywhere. We circle through the town a few times and give up.

Now that we are off the expressway, I expect there will be plenty of places to stop, but the towns are small and it is Sunday, Father’s Day. Of the few pubs and restaurants we see, fewer still appear to be open.

The streets are lined with cars in downtown Loughrea. We find a place to park and check out our options, choosing a very non-touristy pub right in the heart of town. We enter to find only a few families enjoying a late Father’s Day lunch and a couple more folks hanging out at the bar waiting for the soccer game to start.

After a simple tasty lunch, we head back outside and into a hot and sunny day. It looks like an interesting town, but not much is open today.

Loughrea Cathedral stands just off the main street. Apparently the Cathedral is known for its modern Irish glass, but we only admire it from the outside.

Our destination is the city of Ennis, where we arrive late in the afternoon under a blue, almost cloudless sky.

It is a perfect evening for a jaunt to the nearby Cliffs of Moher, but not far from Ennis we find ourselves sitting in a tremendous traffic jam. It appears to go on forever. (Maybe all the way to the coast.) It’s too nice a day to be sitting here, so we pull out of the line and start to head back. Soon, however, a couple of the cars who had turned back ahead of us slip off on a side road that isn’t on our map. We suspect they might also be headed up the coast and, as locals, might know another route.

Soon we are zig-zagging down a series of smaller and yet smaller rural roads and lanes. The surrounding landscape is lovely; pastoral with rolling green hills and small woodlots where we can see it beyond the hedgerows. However, we have no idea where we are and the sky is beginning to cloud over. Maybe this wasn’t such a great idea.

The car we are still following (the others having long since zipped out of sight) pulls over – apparently to ask directions. This does not seem like a good sign, but then it zips off with what seems to be a renewed sense of purpose. We follow.

Not used to driving on these narrow winding roads, we eventually lose our lead vehicle. Without the sun it is a hard to know what direction we are heading, but it seems that we are still moving north and west toward the coast and soon we find ourselves again on the main road.

It is no longer a lovely day: the sky has become thick and heavy, hanging darkly above the landscape. It doesn’t seem like promising weather for viewing the cliffs, but since we have come this far, we continue on. 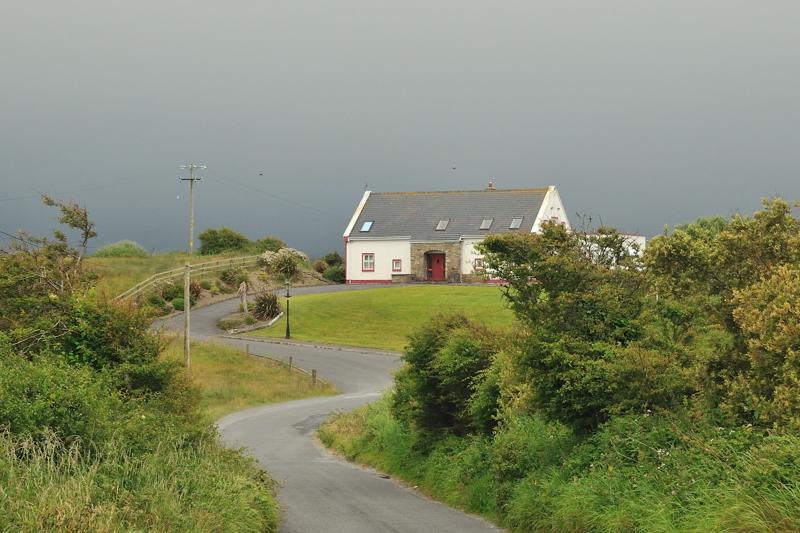 The road climbs as we travel north along the coast. At the same time the sky seems to drop lower and lower, until it meets the road in a soupy fog. We can just make out the outline of the gate marking the entrance to the cliffs.

Time to turn around and go home.

Picking our way back through the fog, we eventually drop back below the clouds. And then we turn inland again and, as if by magic, we re-enter a landscape bathed in evening sunshine.

Are you familiar with Rakuten, the online shopping app that gives you cash back when you make a purchase? Did you know you can use Rakuten for travel bookings? Well, you can! END_OF_DOCUMENT_TOKEN_TO_BE_REPLACED