I am in Toronto for this year’s TBEX travel blogging conference and my first conference activity is a guided photo walk led by Toronto photographer David Goorevitch.The group is too large (25 of us were allowed to register) and spans a huge range of interests and abilities, but our guide, David, gamely gathers us together and off we go.

We start shooting even as we are leaving the conference center, as the enclosed walkways connecting the Metro Convention Centre (where TBEX is being held) to Union Station provide lots of interesting images. 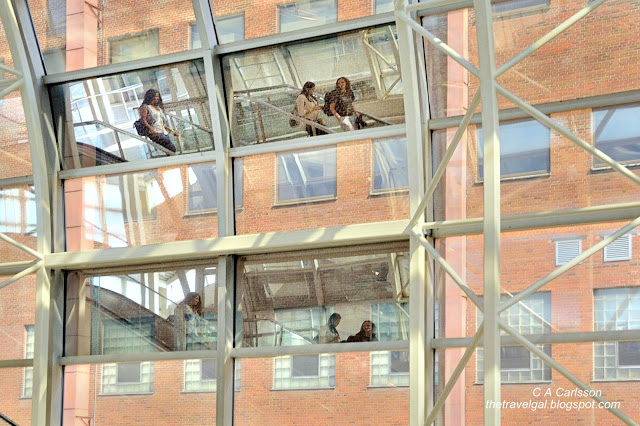 Union Station itself is a classic, although it clearly needs some updating. 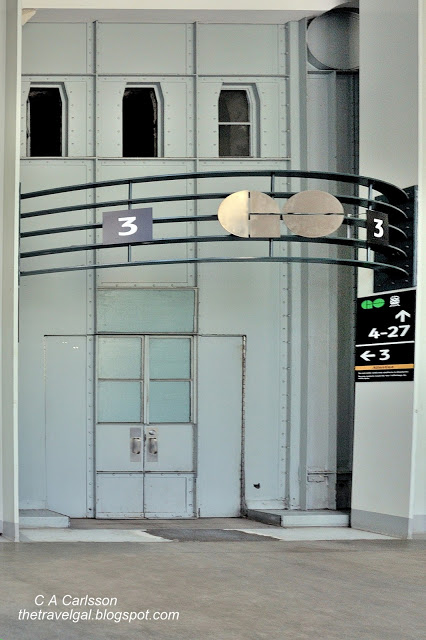 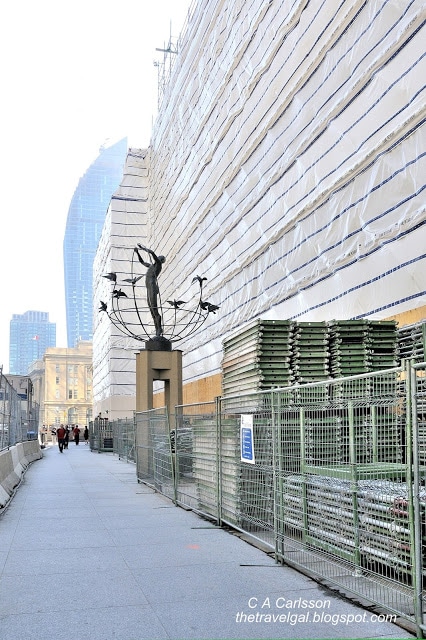 So we say good-bye to Union Station (and a few characters arriving for a weekend clown conference) and head out into the construction to admire a few of the city’s gleaming towers. 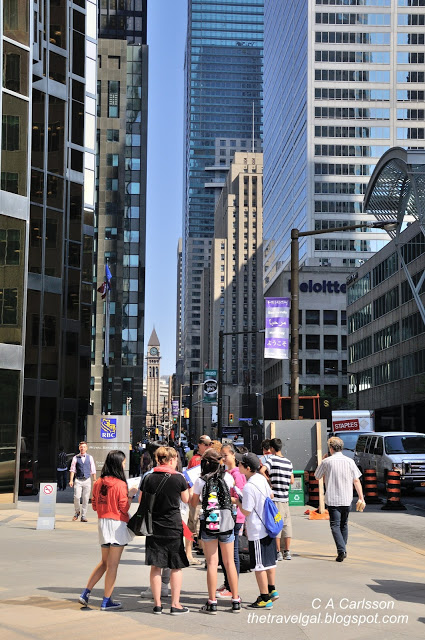 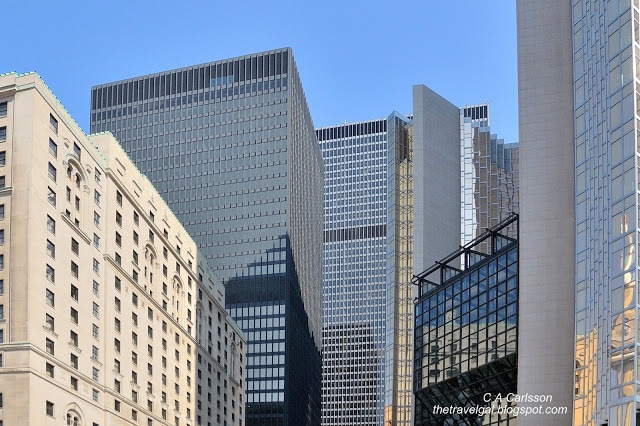 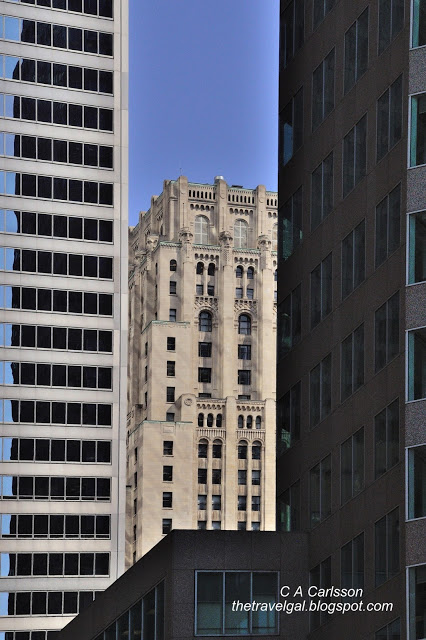 We escape the chaos on the street by ducking into Brookfield Place, which is famous for the soaring cathedral of glass and steel designed by Santiago Calatrava. 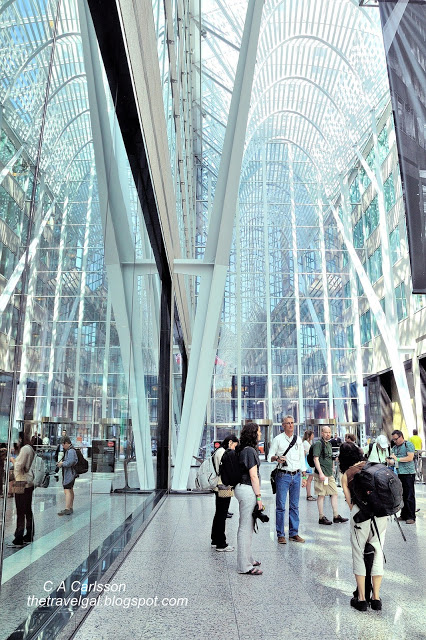 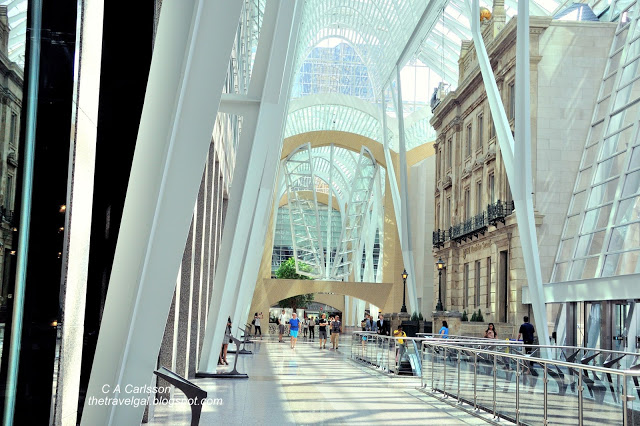 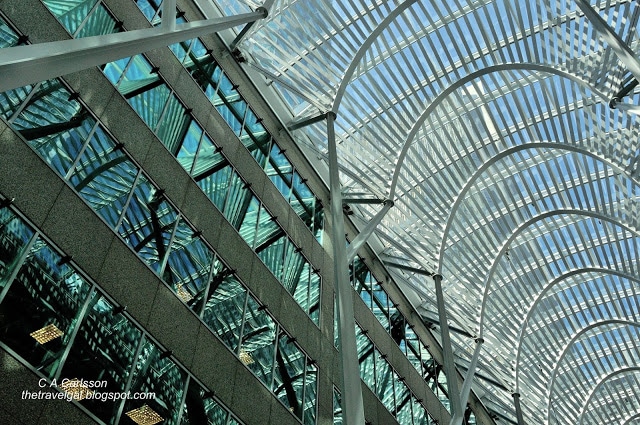 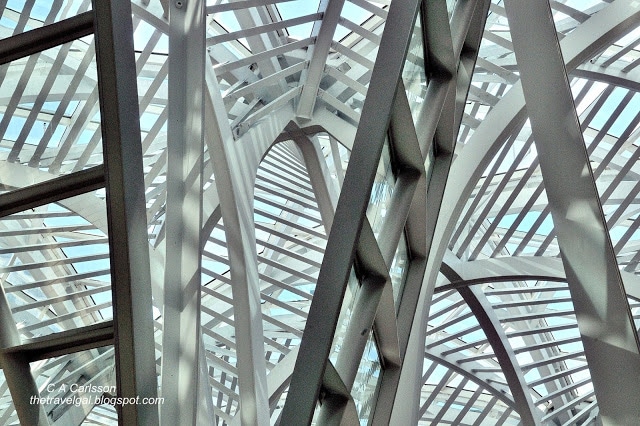 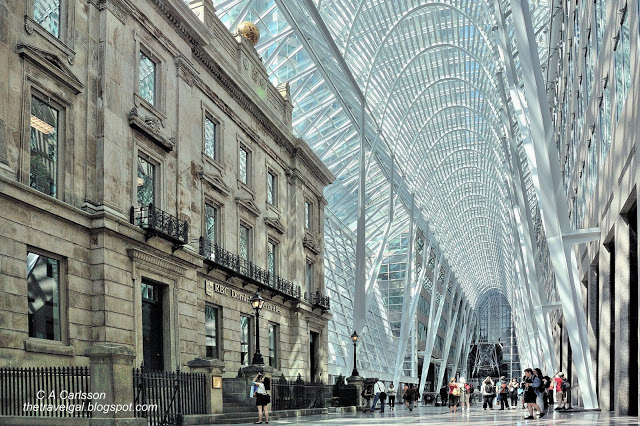 It’s a fabulous place to shoot.

We continue our tour along the streets, only occasionally stopping to re-cross the same street several times in order to get great shots without getting run over. 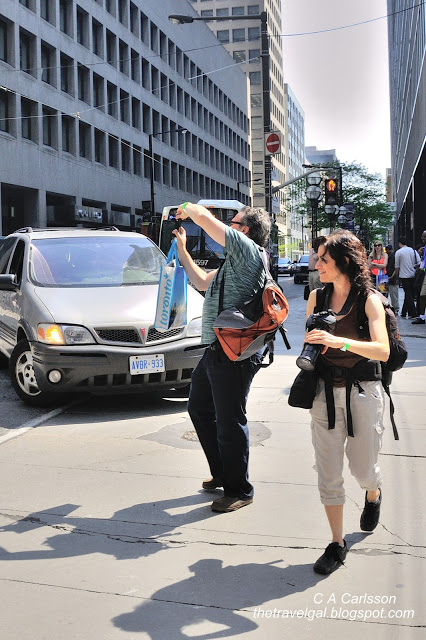 We walk by the Art Deco façade of the former Toronto Stock Exchange building, which has been incorporated into the Toronto-Dominion Centre. Today it serves as the home of the Design Exchange, a museum focused on contemporary Canadian design. We don’t have time to go inside, which is disappointing because the trading floor and murals have been preserved and sound impressive. 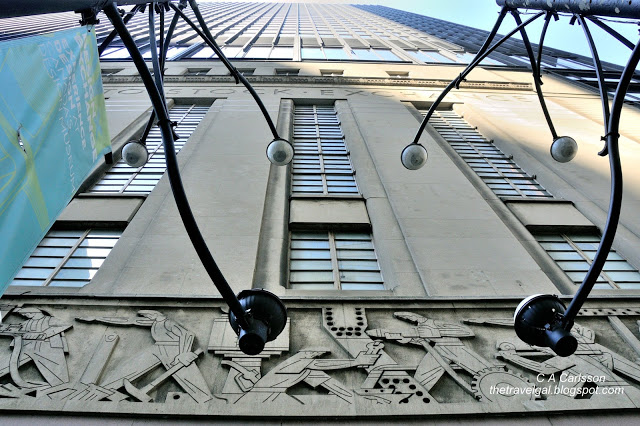 The next stop is around the corner at the Toronto-Dominion Centre itself. Here we have a bit of time to photograph the exterior of Ludwig Mies van der Rohe’s  http://www.miessociety.org/legacy/   stark but elegant structures. 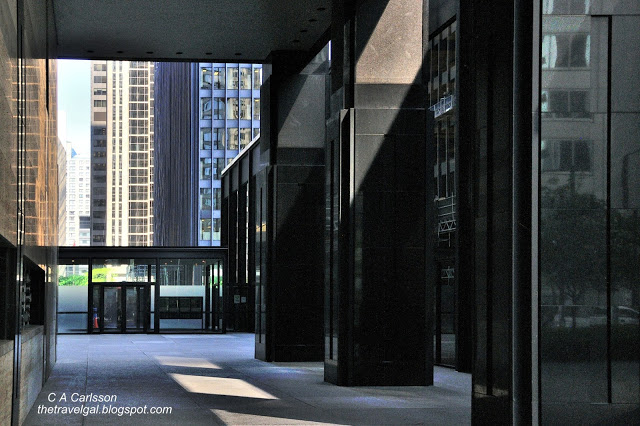 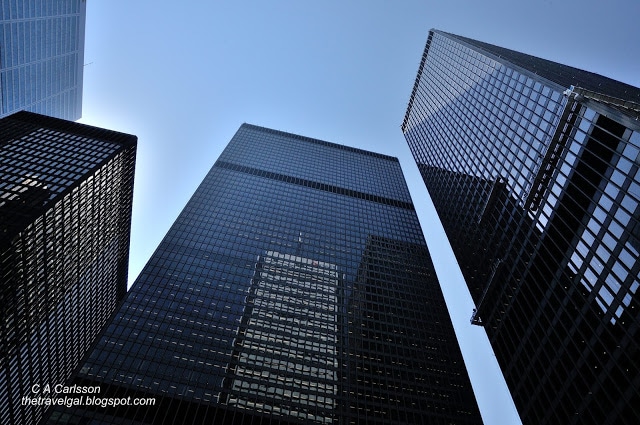 The original buildings from the late 1960s include the single story Banking Pavilion as well as the Toronto-Dominion Bank Tower and the Royal Trust Tower. The simple black glass and steel structures contrast with the more fanciful towers that dominate the rest of the financial district. However, they engage in a conversation with those other buildings as those more decorative buildings are reflected in the dark skins of the van der Rohe buildings.

We don’t go inside now, but I know I’ll be back as one of these buildings is home to the very fine collection of Inuit art that makes up the Toronto-Dominion Gallery of Inuit Art.

The complex also includes a grassy courtyard, a rarity in the heart of the city’s financial district with its stratospheric real estate prices. 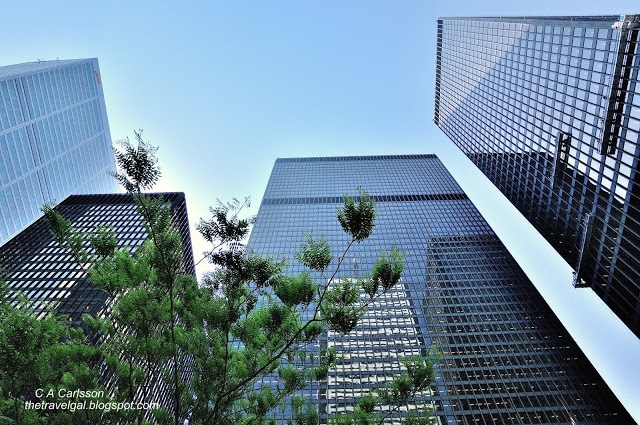 A short walk takes us to the Roy Thompson Hall and Saint Andrew’s Presbyterian Church. 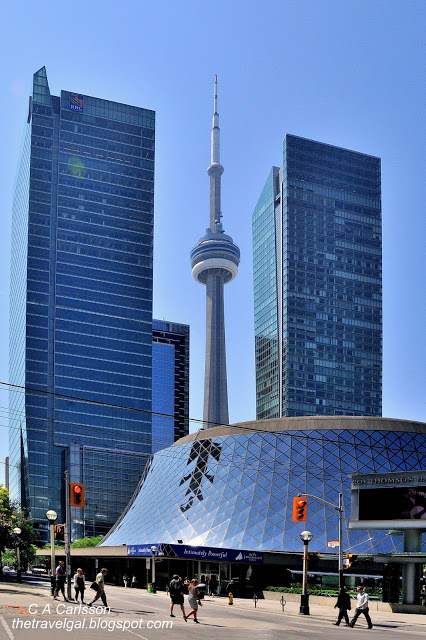 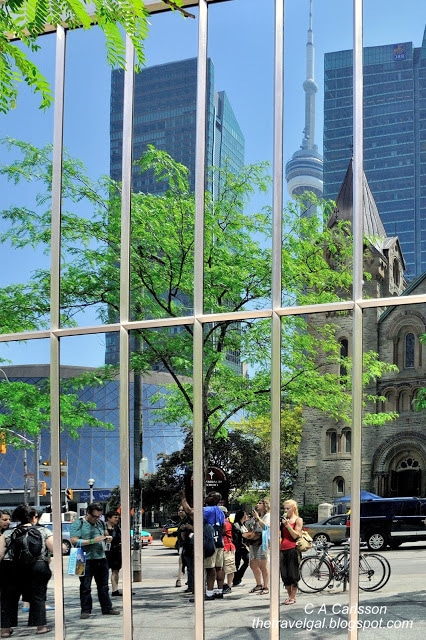 It’s a good place to reflect (both figuratively and literally) on the city’s architectural mix.

A quick trolley ride takes us to the Queen’s Park area (which includes the provincial parliament building), but we are running late so don’t linger. 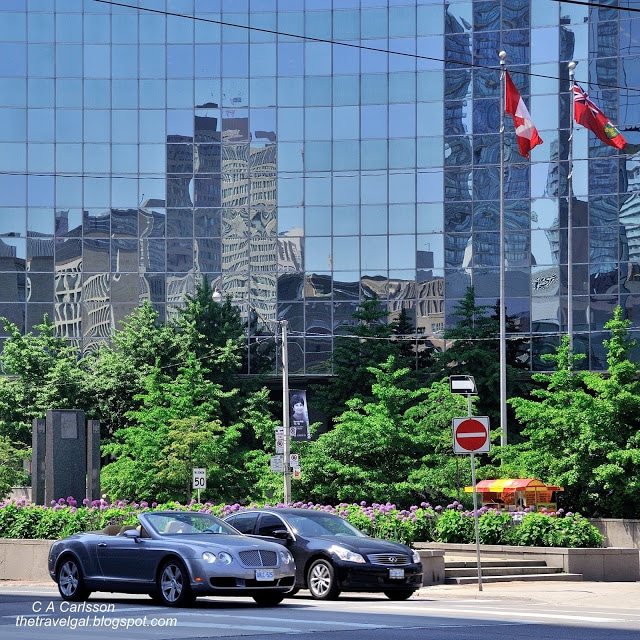 Another short transit trip takes us to the Kensington Market neighborhood. This lively, low-rise neighborhood is noted for its hippy vibe, street art, funky shops, and global food scene. We only get a glimpse of the area, but it’s enough to convince me this is the antithesis of downtown Toronto and its glass towers. 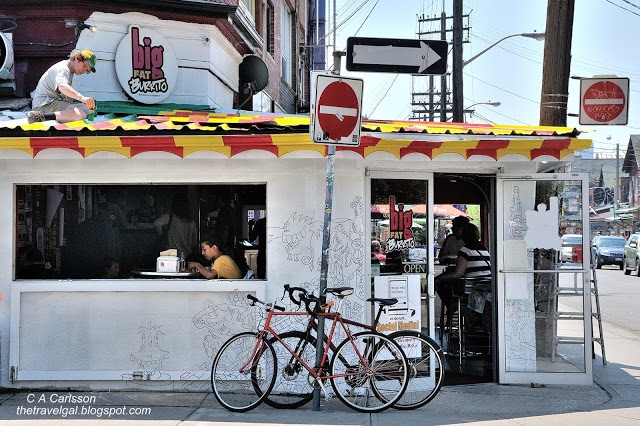 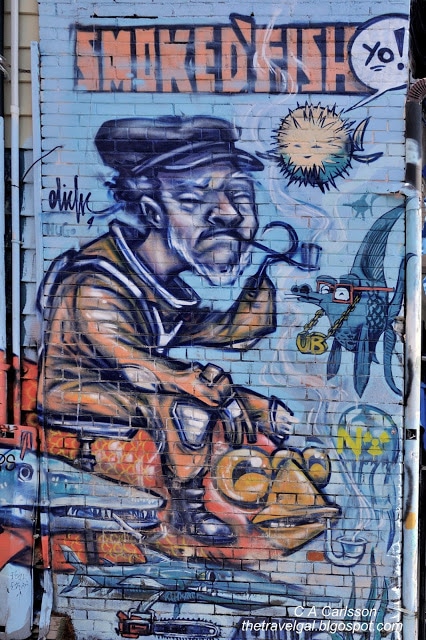 And it’s a fun place to take pictures. 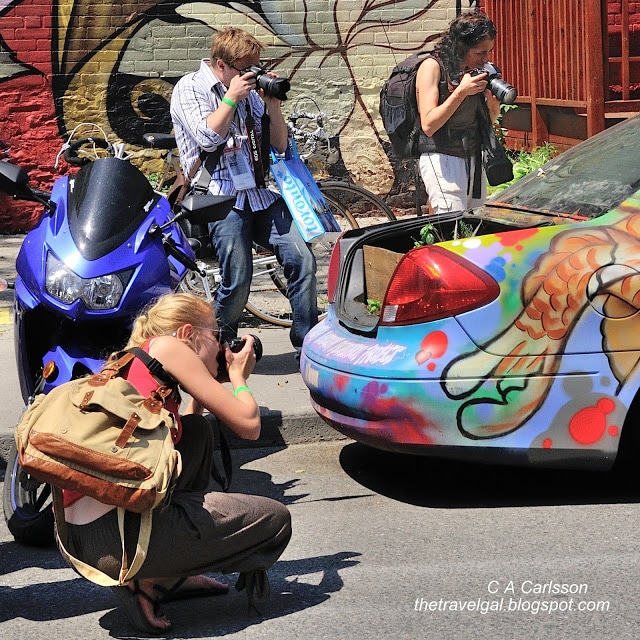 A quick walk through the neighborhood take us to the trolley – and the edge of China Town. 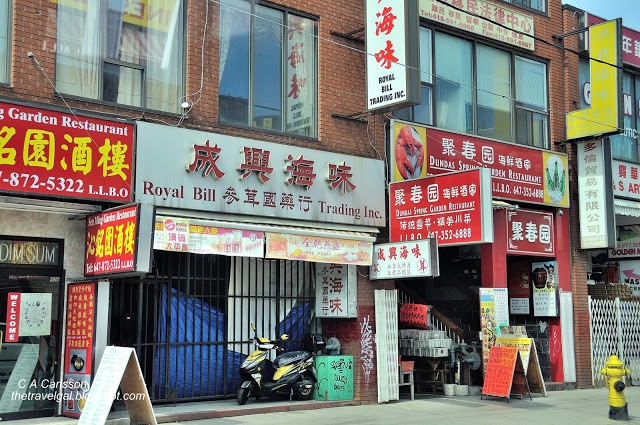 A little more walking and then we are at the CN Tower and the convention center. . . and the end of our tour.

There may have been too many people and too ambitious an itinerary, the photo walk provided a great introduction to the city and to some sights I might not have found on my own. And, of course, there were good tips on how to improve my photos. It made for a very worthwhile morning.

The Atrium at Brookfield Place