Back into Lima, this time straight to the city’s historic heart on a group tour that is to begin at the Monastery at the Church of San Francisco . . . which isn’t open yet.

That’s ok. I love the crazy brickwork of this church, the way it looks as if designed specifically as a roosting place for pigeons.

It’s a good place to hang out and take pictures.

Inside, mass is underway.

I don’t speak Spanish, but the form and cadence of the service is familiar (the Lutheran services of my youth were not so different from the Catholic services across town), as are the Christmas songs sung by the congregation. It’s tempting to slide into one of the benches and join in for awhile.

But I don’t. (Mostly because I don’t want to miss my tour.) Back outside, Lane and I chat with the guide for awhile and then, soon enough, we are headed through a side door that takes us into the monastery.

It is a lovely place with an elegant cloister with gardens, fountains, intricate carved wood ceilings, a fragments of lovely old frescoes, intricately carved dark wood ceilings, and rows of Seville tiles painting the story of St. Francis of Assai. 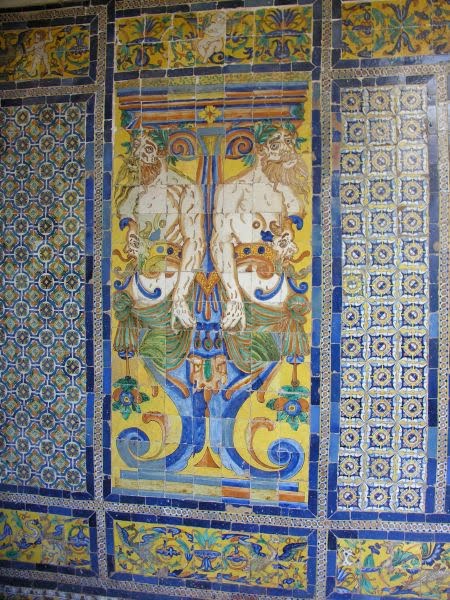 (Photography is forbidden inside the monastery. As much as I hate those rules, I do try to respect them, so I don’t have any pictures of my own.)

It is a beautiful place, but a lot has been lost over the years. Apparently the monastery was abandoned for some time, leading to the loss of most of the frescos and much of the wooden ceiling. It’s hard to imagine abandoning such a lovely and welcoming structure, but then, changing tastes and values are not unique to our own time.

After a brief tour of a couple rooms (much of the museum and library are, apparently, closed on Sunday), we head down into the catacombs. They are not dug particularly deep into the ground, yet it is cool and musty smelling here, the winding path sometimes leading to quiet corners where the sounds of the congregation are but a whisper and at other times bringing us so near that the sounds of worship swirl around us in the dank air. It seems right, this mix of life and death.

Originally Lima’s ordinary and poor residents were buried here, most laid in individual tombs and buried in distinct layers – a dignified enough internment. A project in modern times removed the bones from their place of burial and organized them as a “tourist attraction.” (As described by our disgusted guide.)

I know the display of bones like this is common in other places (I’ve seen it in both France and Portugal), but it still seems an odd thing.

While a bit macabre, this place is really interesting architecturally, with arched walls and “wells” sunk into the earth to ensure the structure would withstand the earthquakes that regularly shake this city. It must work. Construction began in 1542 and wasn’t complete until over a 100 years later. Since that time this complex has survived fire and repeated earthquakes, including the 1746 quake that destroyed most of Lima.

As we leave, the worship service continues above us to the tune of Simon and Garfunkel’s “Feeling Groovy. . .”

Are you familiar with Rakuten, the online shopping app that gives you cash back when you make a purchase? Did you know you can use Rakuten for travel bookings? Well, you can! END_OF_DOCUMENT_TOKEN_TO_BE_REPLACED