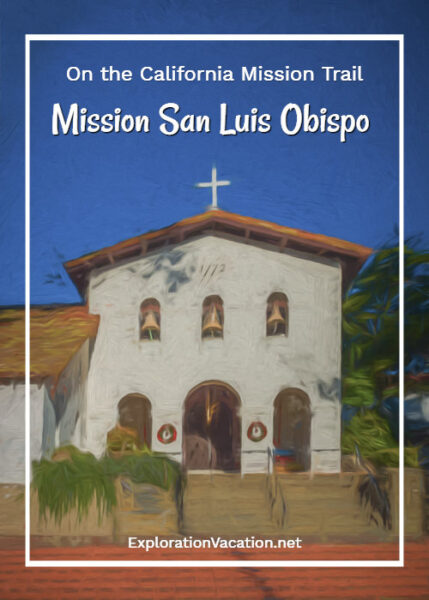 Mission San Louis Obispo de Tolosa has undergone many physical changes over time, leading to a church where past and present merge in interesting ways today.

Past and present merge at Mission San Luis Obispo

Founded by Father Junipero Serra in 1772, the church of Mission San Luis Obispo de Tolosa perches above a small plaza in the heart of the city that grew up around it. 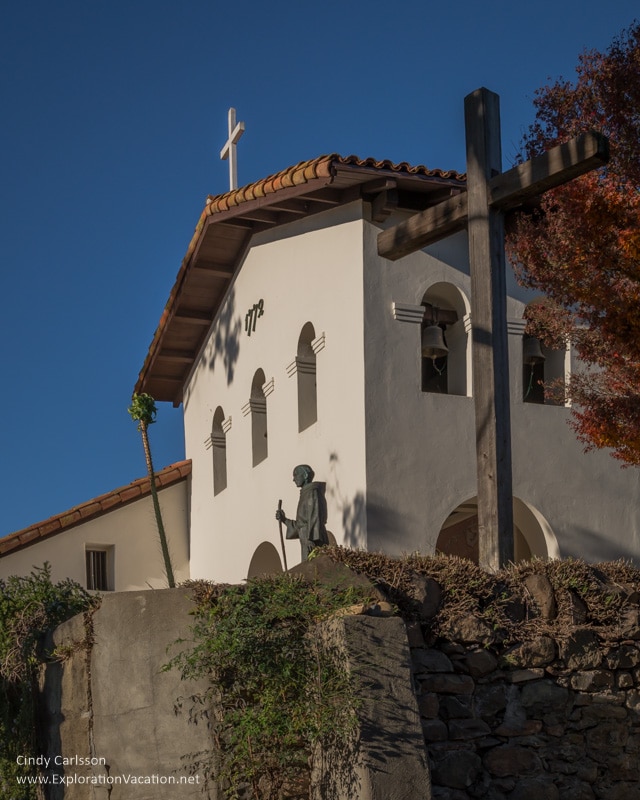 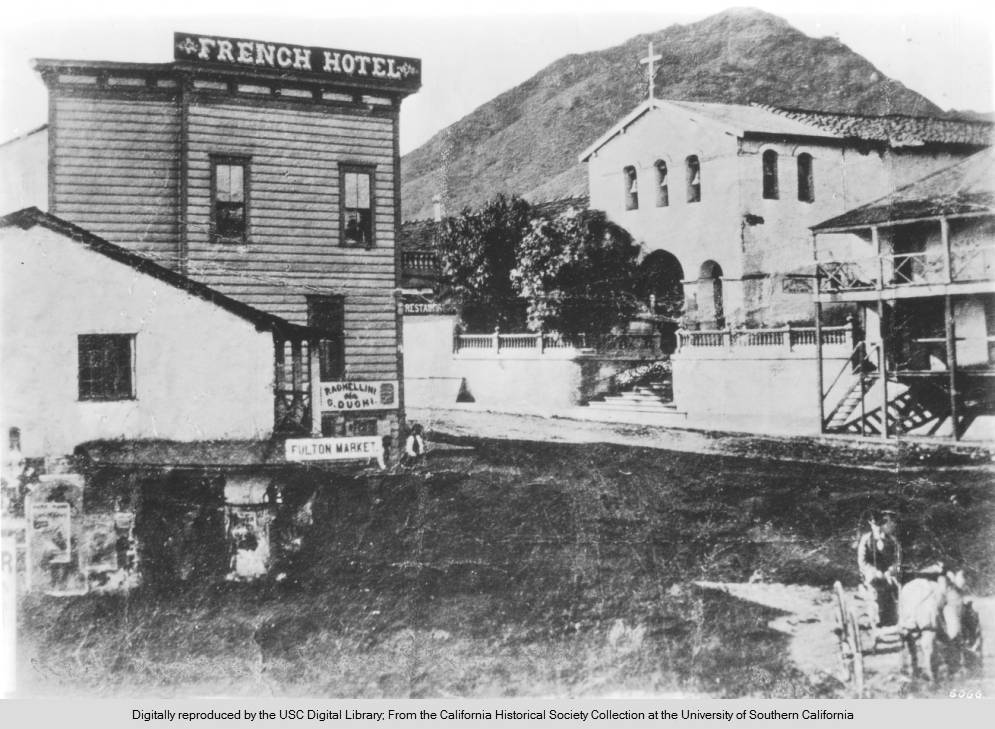 Like other missions in California, the original church at San Louis Obispo de Tolosa was a simple adobe building with a thatch roof.

After several attacks involving flaming arrows (the local Chumash Indians were friendly with the padres, but their neighbors were not), the padres began experimenting with tile production. By the 1790s the mission could produce enough tile to roof mission buildings and construction of a new church – with a tile roof – began. 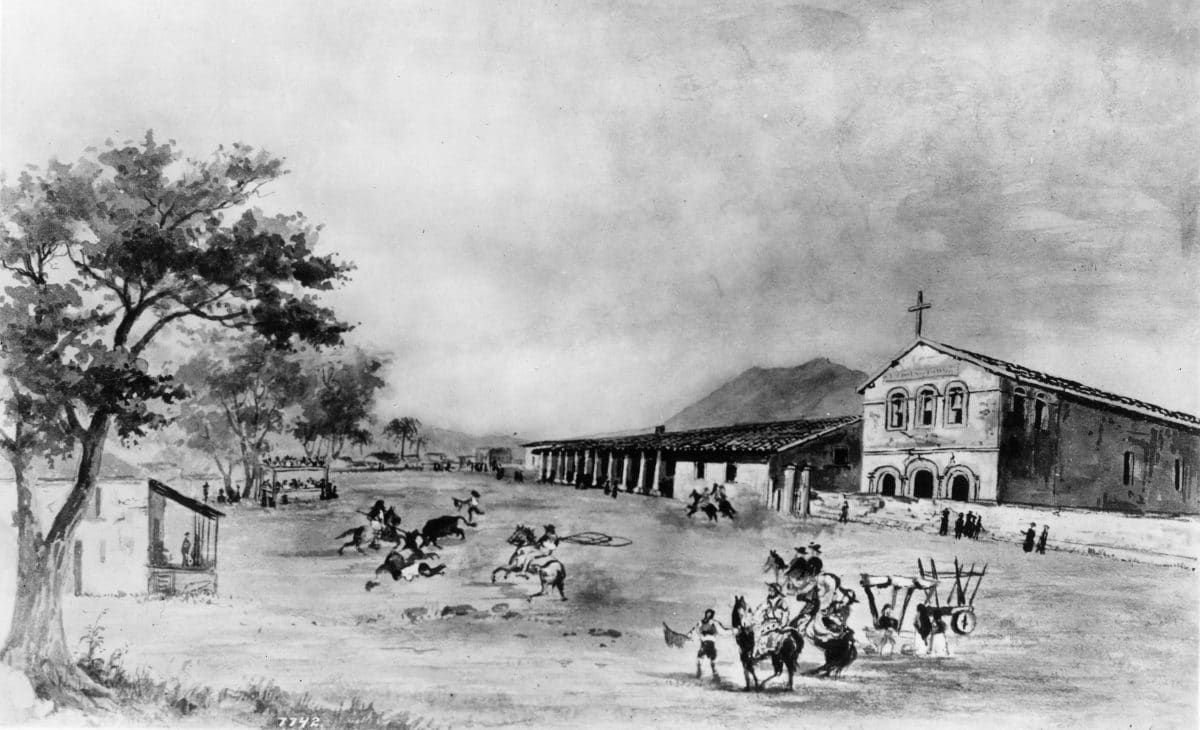 The 1794 church with the tile roof is structurally the same one I visited over the winter.

However, various changes occurred over time. For example, the distinctive front façade – which also serves as the church’s belfry – has been demolished and rebuilt more than once. 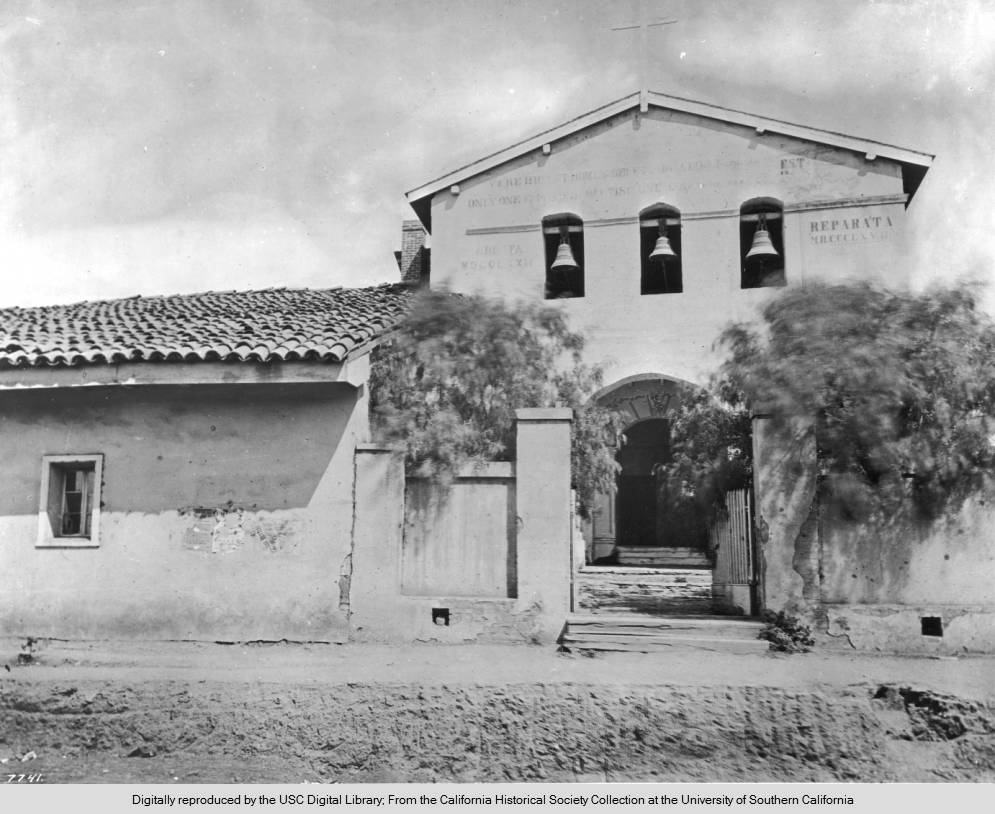 In 1865 the church probably looked much as it did when first completed in 1794.

Sometime later both a side chapel and very large addition were added to the church. 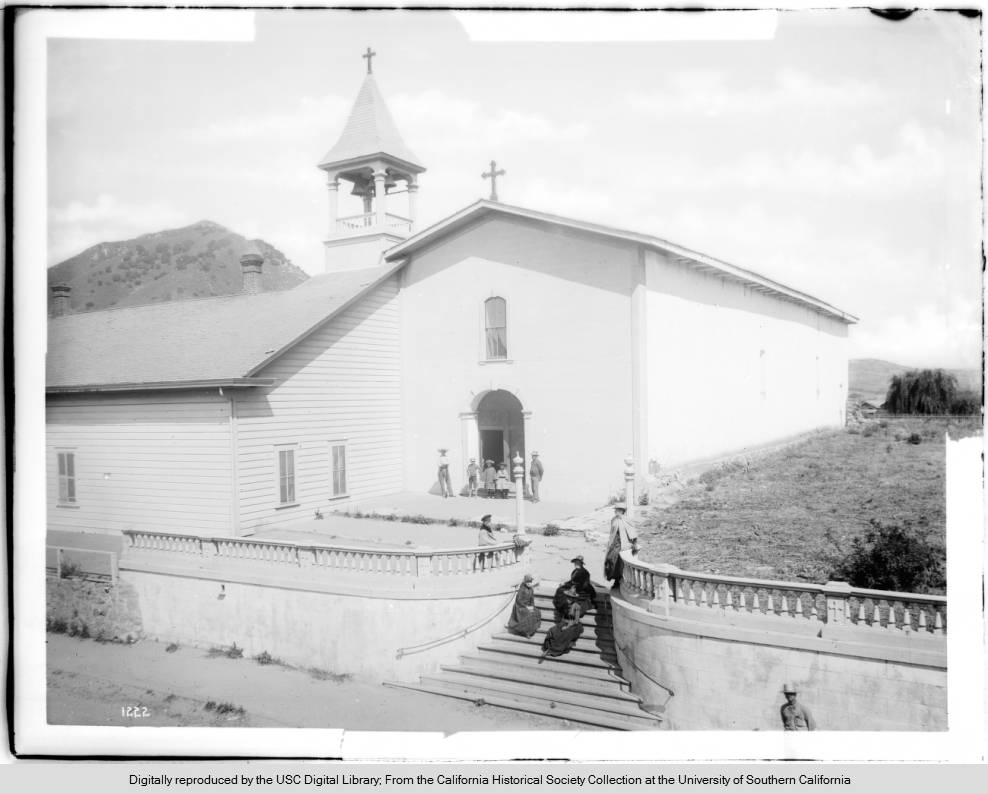 Today it’s hard to imagine why anyone thought it was a good idea to remove the front of the church, build a steeple, and then cover much of the mission with wood siding. But obviously someone did. 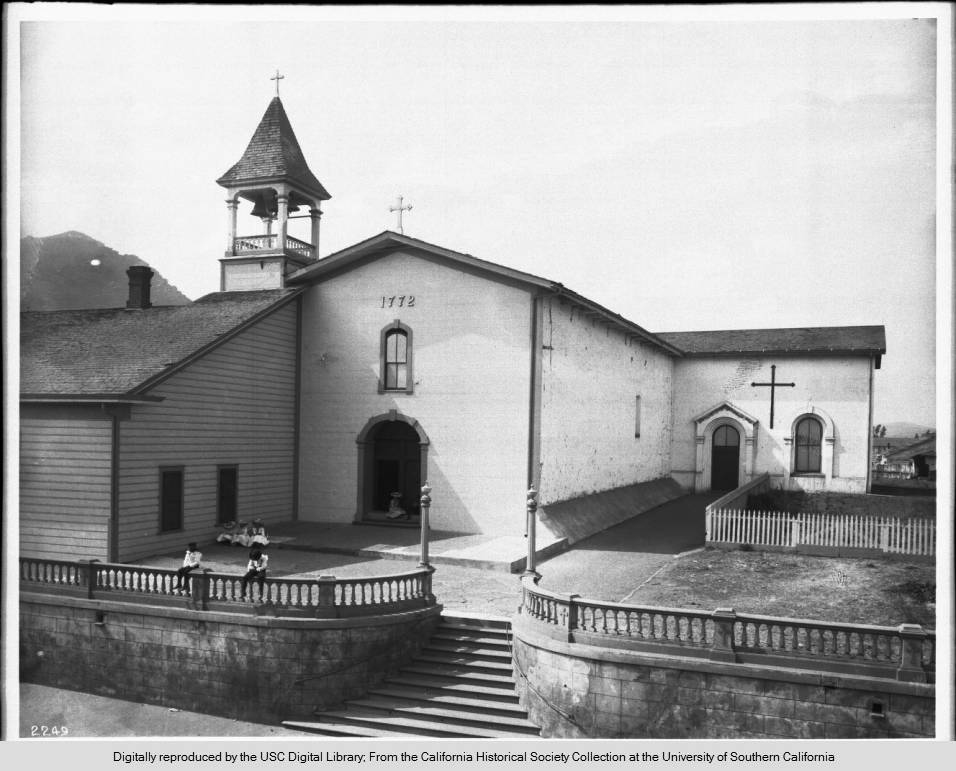 The church sported this New England town hall comes to the pueblo look for over 50 years.

At some point the expanded addition and bell tower were removed. At the same time, the bell tower was restored to the front of the church. In the end, the exterior again looked much as it did when San Luis Obispo de Tolosa was constructed in 1794. 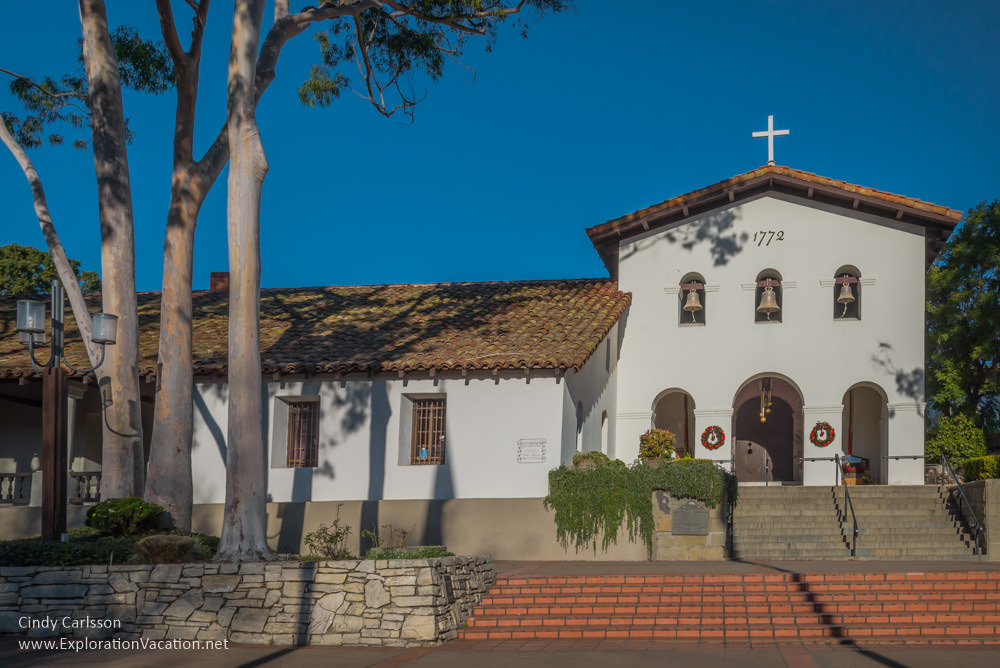 Like the exterior, the interior of the church also underwent a variety of changes over time.

I can’t find any illustrations of the church’s original interior. Apparently it had a wood beam ceiling, tile floor, and at least a few wall decorations — all of which are common in churches of this period.

Over time, those features were obscured. 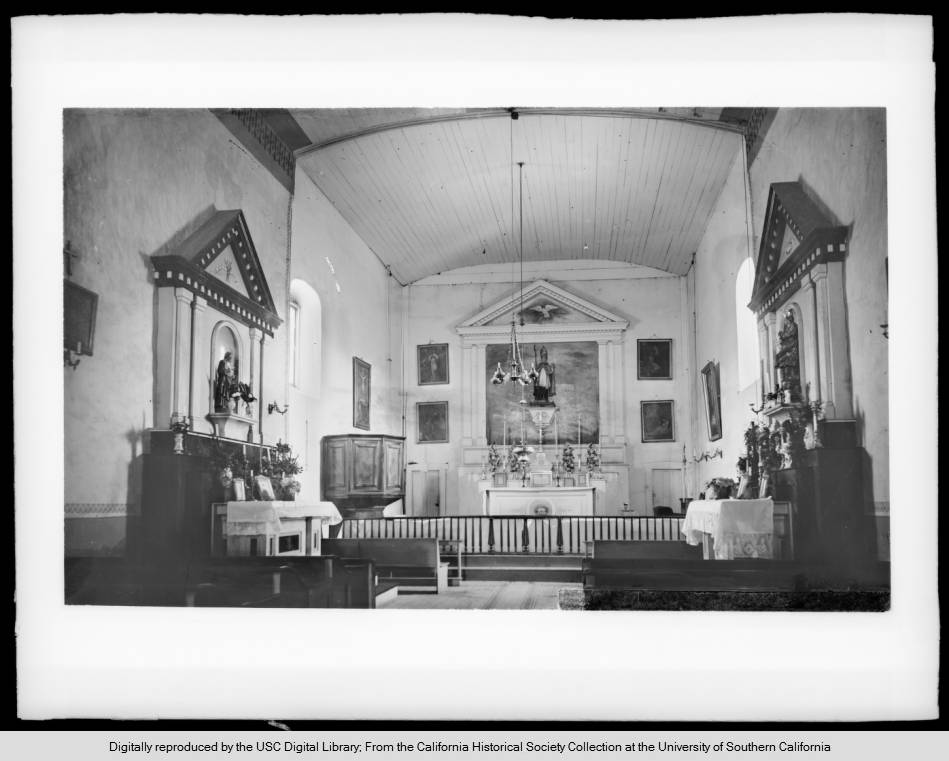 (This photo is dated 1885. It was taken before the original tile floor was replaced with wood flooring or the chapel was added, but after the beam ceiling and wall decorations were hidden from view.)

And, as times and tastes changed, some of those original features were restored or recreated. 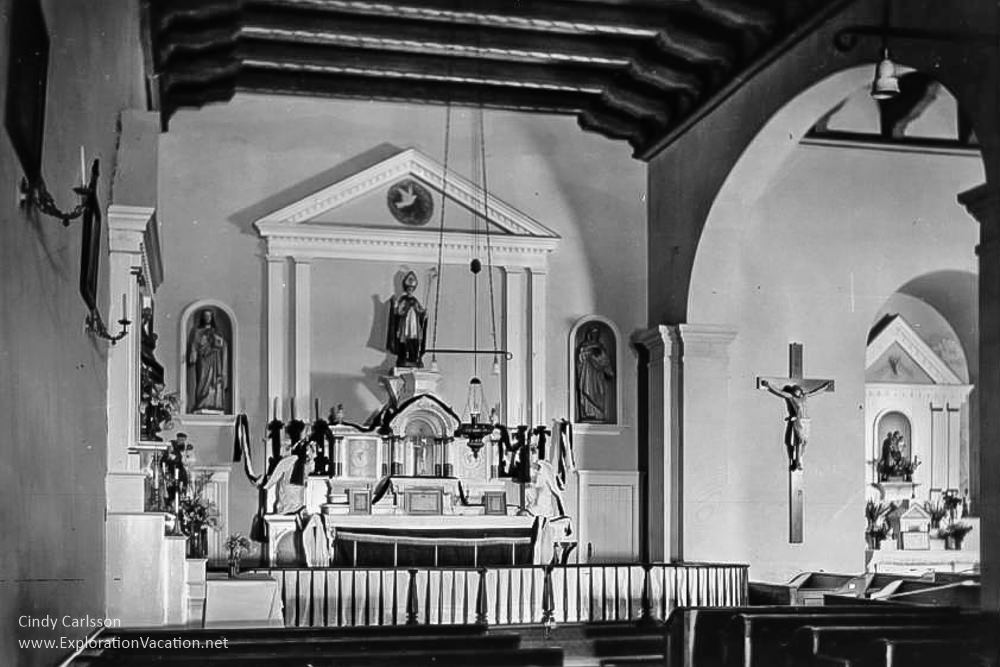 (Although dated as circa 1900, this photo must have been taken much later, as it shows both the chapel added in the 1890s and the original ceiling beams that weren’t restored until the 1930s or 1940s. This is a corrected copy of a photo that was digitally reproduced by the USC Digital Library from the California Historical Society Collection at the University of Southern California.)

A thorough restoration attempted to bring the interior of San Luis Obispo de Tolosa back to the original look. 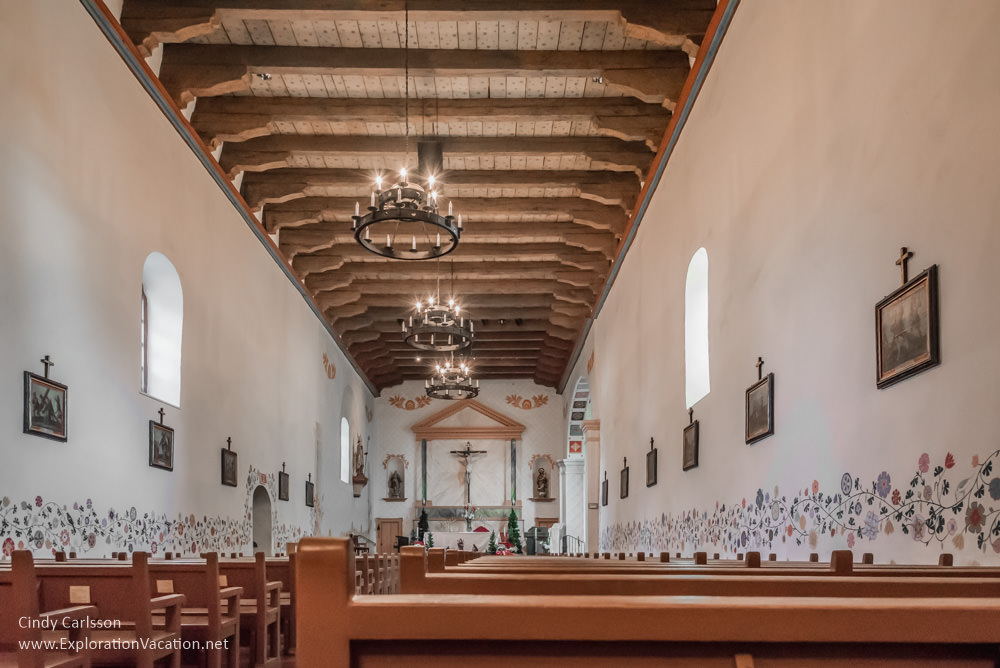 While neither of the historic images I found showed any interior decoration aside from the elaborate ceiling beams, apparently a few painted decorations were hidden under layers of plaster around the altar. These were incorporated into the restoration. 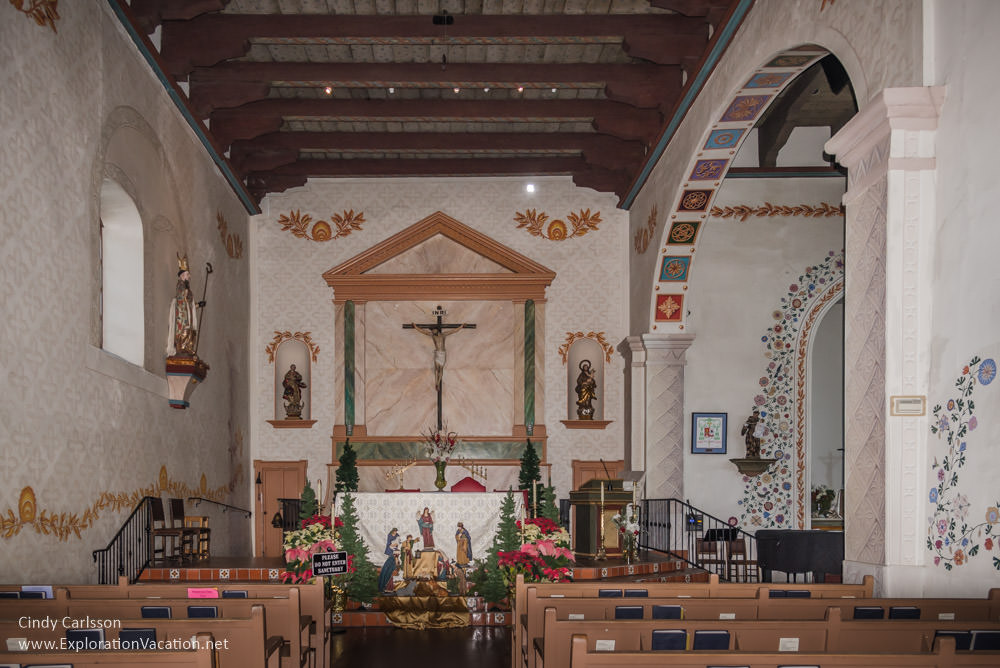 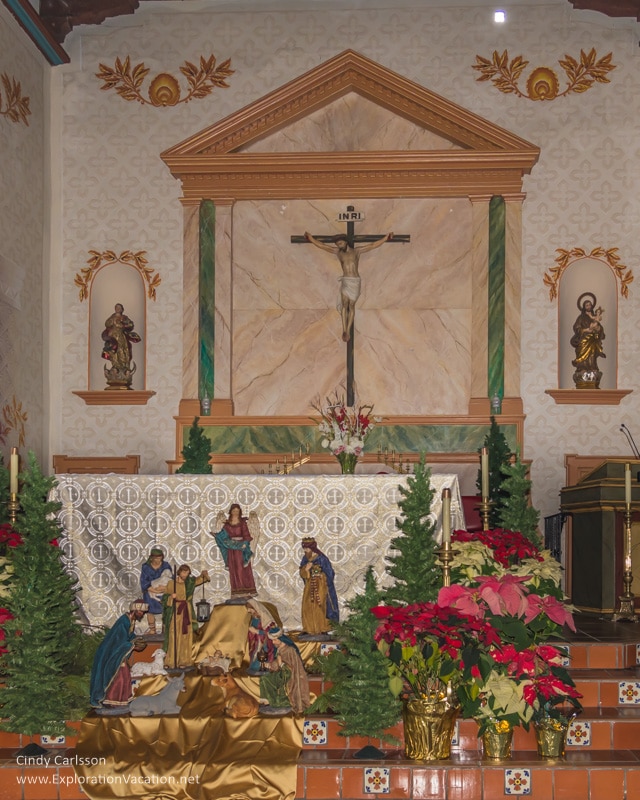 I’m not sure why those motifs weren’t carried throughout the church, but they weren’t. Instead a whimsical mix of local birds and imaginary flowers leap along the other walls. 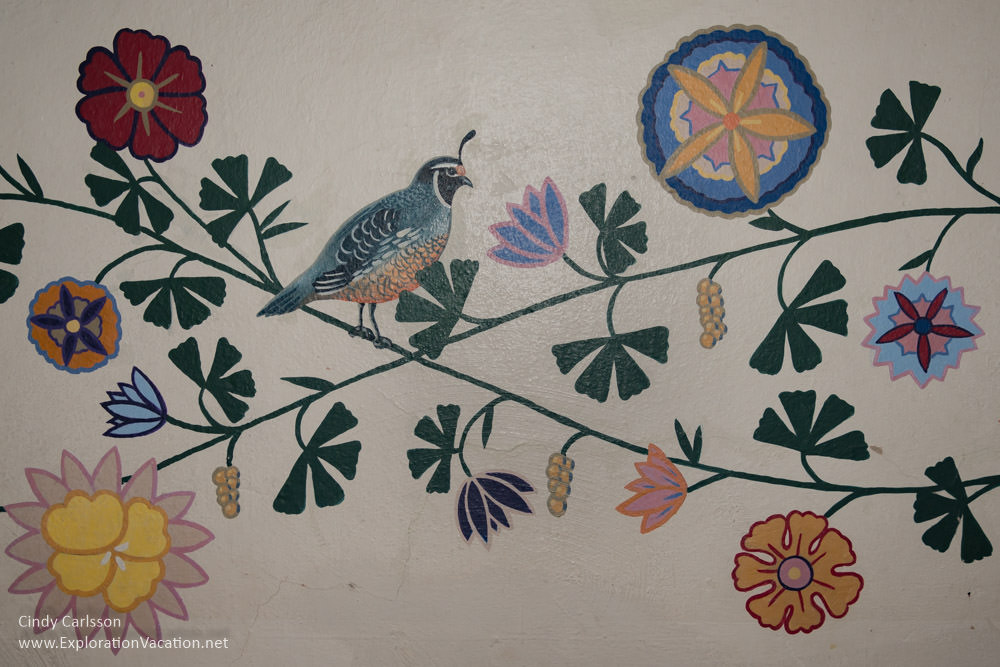 They don’t seem to be historically accurate, but they are charming.

The side chapel in Mission San Luis Obispo de Tolosa includes an alcove with a small altar. 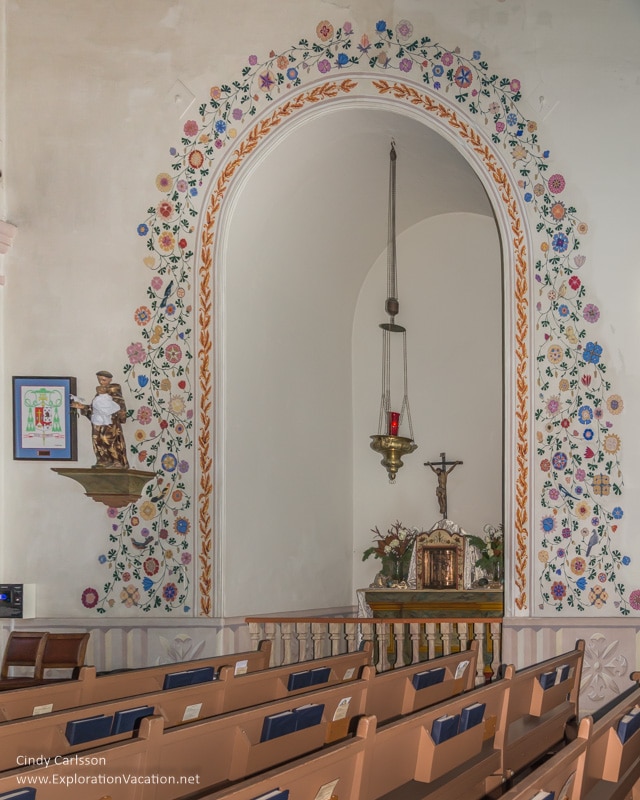 It also has a number of paintings, one of which really begged for my attention. 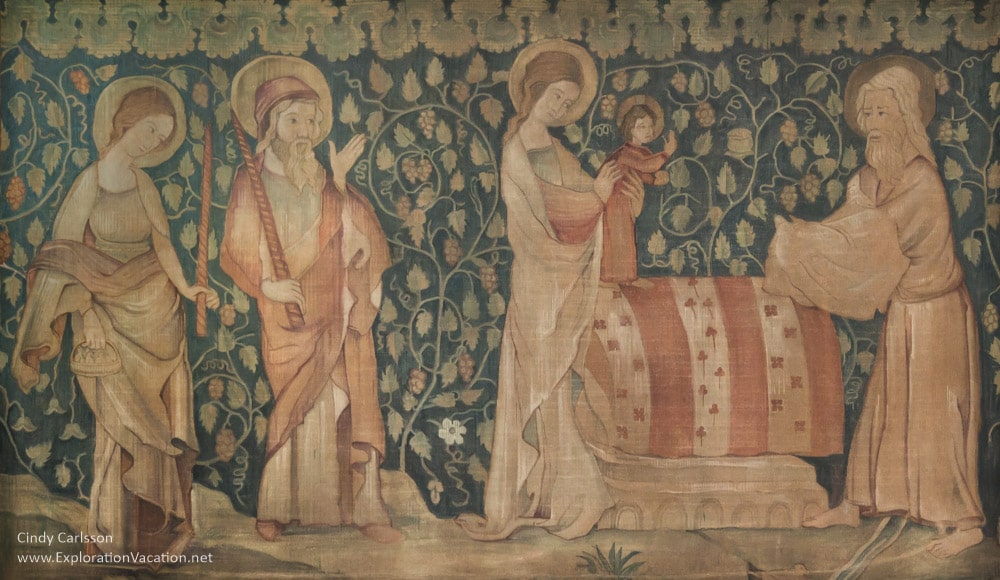 (Should you happen to know anything about this painting, tell the rest of us about it!!)

Little remains of the mission’s grounds

Back outside, there is a small garden. There are a few flowers and a stand with some of the original church bells, but the quadrangle that the church once anchored has all but vanished over time. 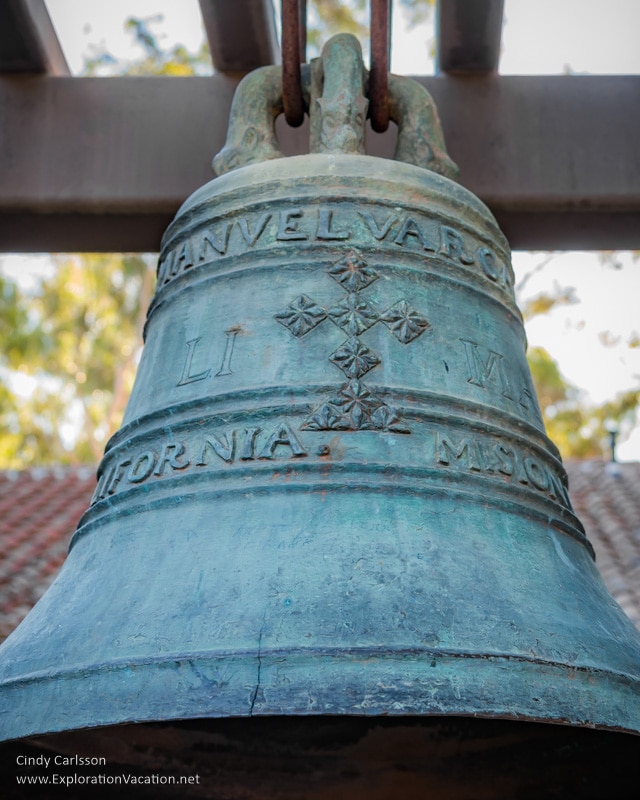 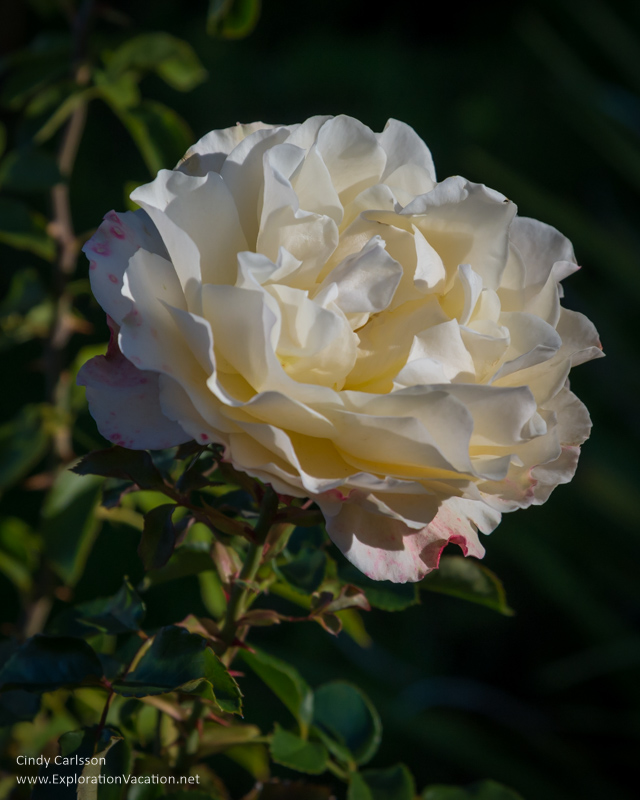 A history of highs and lows

Although never particularly large in terms of converts, at its peak Mission San Luis Obispo de Tolosa was one of the most productive in California.

Besides its tile works (the first in California), the mission was famous for its wine, olive oil, and the vast amount of wheat grown in its fields. Large herds of cattle (at least 2,500 head at one point) assured plenty of beef for all and even larger flocks of sheep provided wool that was woven into fabrics sought far beyond the mission itself.

However, with a shrinking community and deteriorating buildings, the mission fell on hard times even before it was secularized and sold off in pieces during the 1830s. That deterioration continued even after the site was returned to the Catholic Church in 1859. Despite work done to modernize the church itself (the rebuilt façade, new steeple, and wooden siding were just the most obvious features of the work undertaken at the time), by 1900 many of the remaining mission buildings were crumbling. 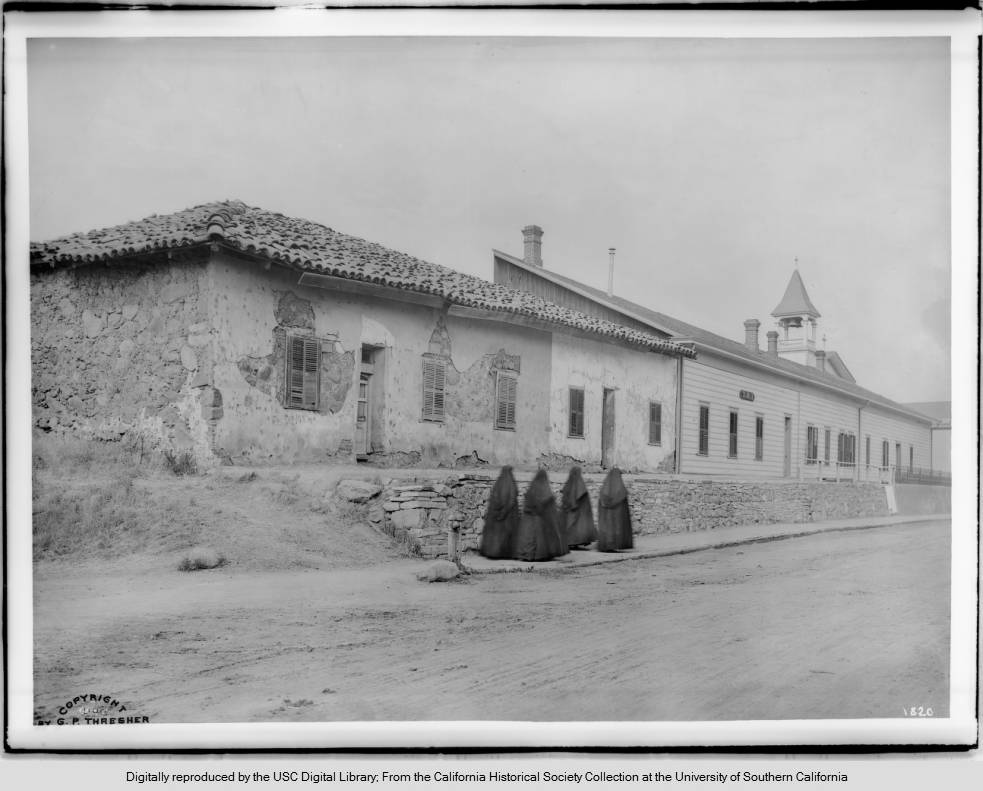 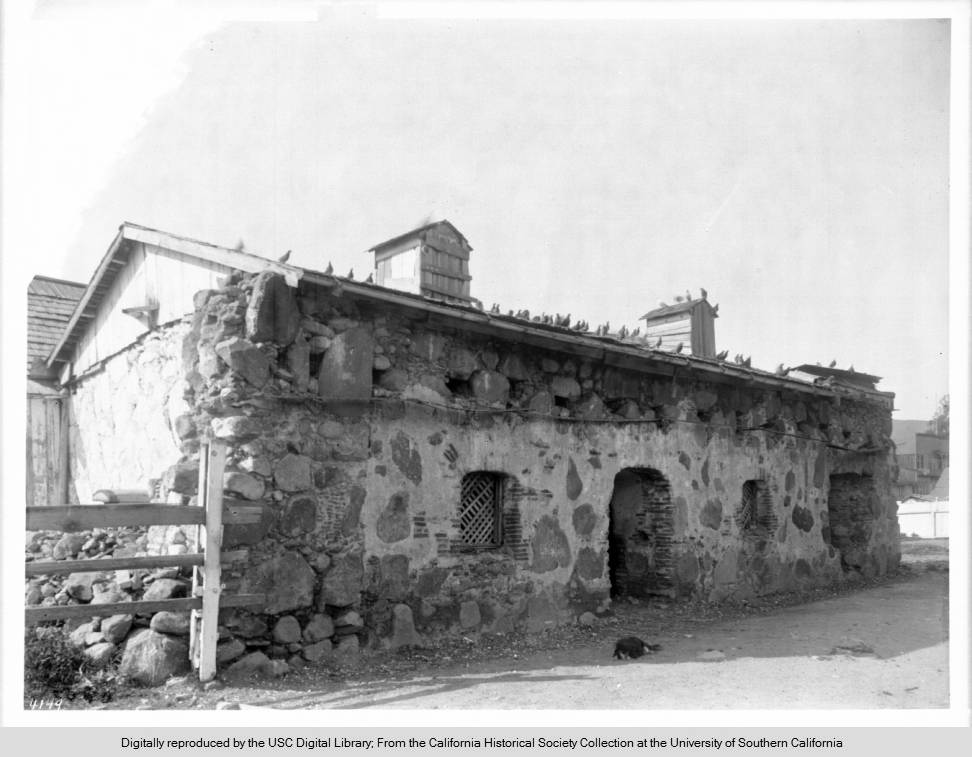 The mission’s fortunes finally began to change in the 1920s with increasing public interest in historic preservation in general and the mission era in particular.

Restoration of the remaining buildings began in the 1930s. But by that time the mission had been reduced to the church, a bit of open space for a small garden, and the padre’s quarters. While there are still a few old adobe structures in the area that were likely once part of the mission, they have long been in private ownership. 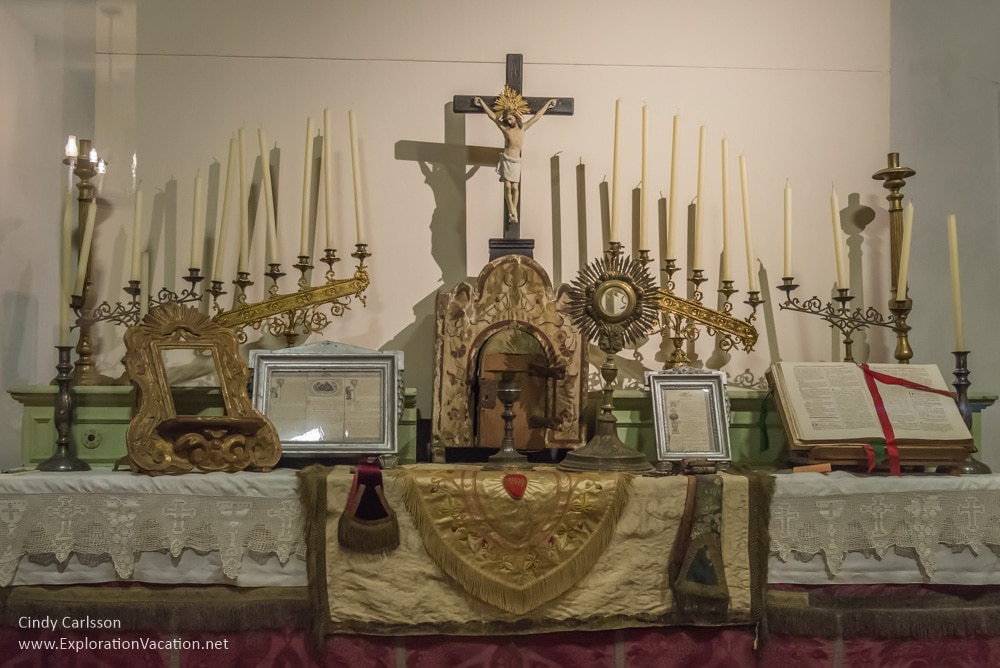 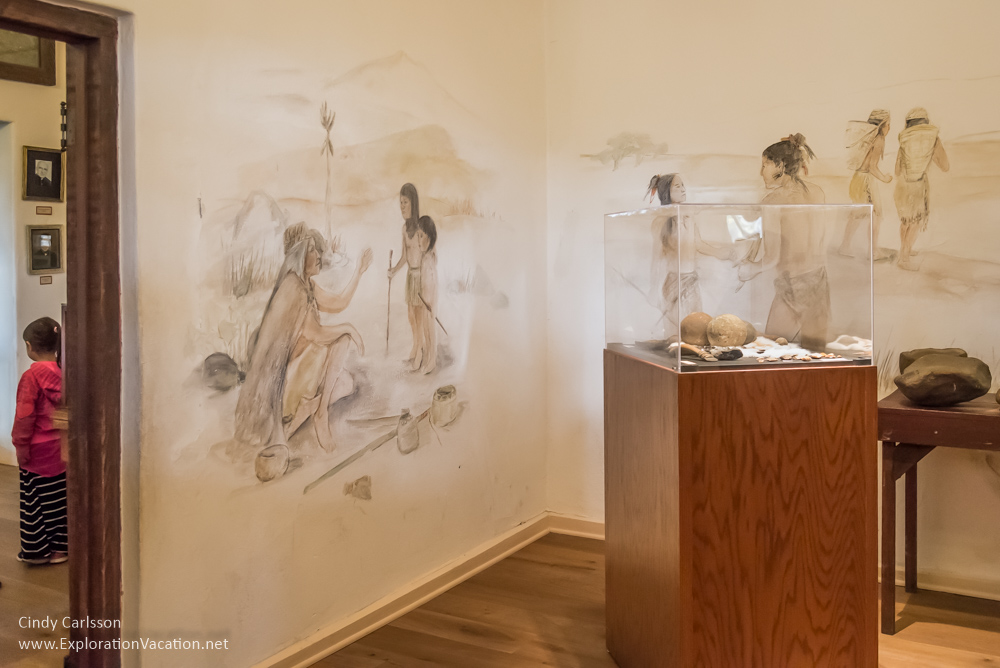 When the padres came, they initiated the destruction of Chumash civilization, yet it was only a brief time until their own world was destroyed as well. The museum here is a good place to consider the ebb and flow of history.

If you stick to the highway, San Luis Obispo is a three-four hour drive from either Los Angeles or San Francisco. Alternatively, you can easily spend a day exploring Highway 101 or spectacularly scenic Highway 1.

Visit the historic mission and museum

This is an active Roman Catholic church that serves a large faith community. Always be quiet and respectful when visiting.

The church, museum, and a small gift shop are open during regular business hours every day except certain holidays. Docent-led tours are available most days at 1:15 p.m. (2 p.m. on Sundays). There is no charge to enter the church or the excellent museum, but donations are gratefully accepted. See the church website for details and contact information.

Spend a little time in the city of San Luis Obispo

Conveniently located between Los Angeles and San Francisco, the city of San Luis Obispo is a good base for exploring the California Coast or heading inland to the Paso Robles, Edna Valley and Arroyo Grande wine regions.

Mission San Luis Obispo is at the edge of the historic downtown. While the downtown itself appears to have suffered decades of disinvestment, it is again coming to life with funky local shops, inviting restaurants, and lively bars. It is also famous for a rather disgusting Bubblegum Alley – seek it out or avoid entirely as you like.

While I couldn’t find any information on them, the historic neighborhoods beyond the old business district are a pleasant place to wander.  You can even try to spot buildings that might have been part of the mission compound.

Beyond downtown, the Cal Poly campus has a number of sites that look interesting, including the Leaning Pine Arboretum, the Poly Canyon Design Village (the Architecture Graveyard), and the Shakespeare Press Museum. (I didn’t get to any of these on my last short visit to SLO, but they are on my list for next time.)

Mission San Miguel Arcángel is about a half-hour to the north near Paso Robles. Like San Luis Obispo, it is an active parish church. However, it is also a historic landmark that retains its original frescoes and other features.  The complex includes a museum and gift shop, which are open daily.

An hour to the south, La Purisima Mission State Park preserves the restored mission and associated buildings. The park is open every day for self-guided tours. It also provides a range of programming and special events.

Downtown San Louis Obispo is filled with restaurants serving just about any cuisine you might desire. Most use regional ingredients and serve local wine and beer.  Just walk up and down the street and pick what appeals to you.

Most hotels, including many national chains, are located near Highway 101 to the north and northeast of downtown. During weekends, an evening trolley links many of these hotels to the historic downtown.

We stayed at the other end of downtown at the Avenue Inn. Like the hotels to the north, the Avenue Inn is part of the strip commercial development along Highway 101. However, it is an easy and generally pleasant walk to the historic downtown.

There are also a number of hotels up by the college.

Use TripAdvisor to check reviews, find the best price, and book a room at the Avenue Inn or another hotel in San Luis Obispo. (Using this link may generate a small commission for me at no charge to you.)

There don’t appear to be any Airbnb rentals in downtown, but there are rooms available in other parts of the city. If you don’t already have an Airbnb account, using this code (Airbnb affiliate link) will save you $40 and provide me with a $20 credit. 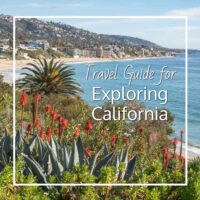 2 thoughts on “A merger of past and present at Mission San Luis Obispo de Tolosa, California”

Are you familiar with Rakuten, the online shopping app that gives you cash back when you make a purchase? Did you know you can use Rakuten for travel bookings? Well, you can! END_OF_DOCUMENT_TOKEN_TO_BE_REPLACED