The Stockholm Archipelago includes more than 25,000 islands and islets along the Swedish coast. All of them seem a world away from Stockholm. And, while many are only a quick ferry ride from the city, a few take a bit more effort to reach.

Öja, home of the Landsort lighthouse, is among the latter. 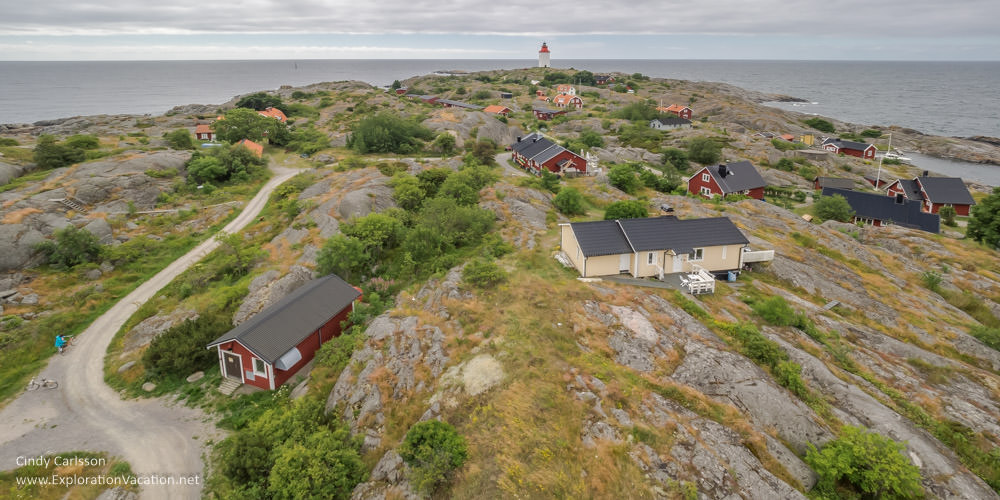 But it’s so worth the time it takes to get there.

Öja Island sits at the very southern end of the Stockholm Archipelago.

Commonly referred to as Landsort (the name of its signature lighthouse), the island is long and thin, just 2½ miles long and less than ½ mile wide. The rocky island is a protected environmental area, as it is home to many nesting birds and a number of rare plants.

Fewer than 30 people live on the island throughout the year, but in summer second homes and seaside cottages fill with visitors – many with long family ties to the island.

Landsort is a place that seems even further from Stockholm than the couple of hours travel (by land and sea) required to reach it.

Regular ferry service from Ankarudden harbor south of Stockholm to one of two small harbors in the village of Storhamn (the only village on Öja Island) links the island to the rest of Sweden.

As the ferry passes other islands and islets as it travels between the mainland and Landsort. Some of these have a house or two, but others are home only to the sea birds that glide along the shore. 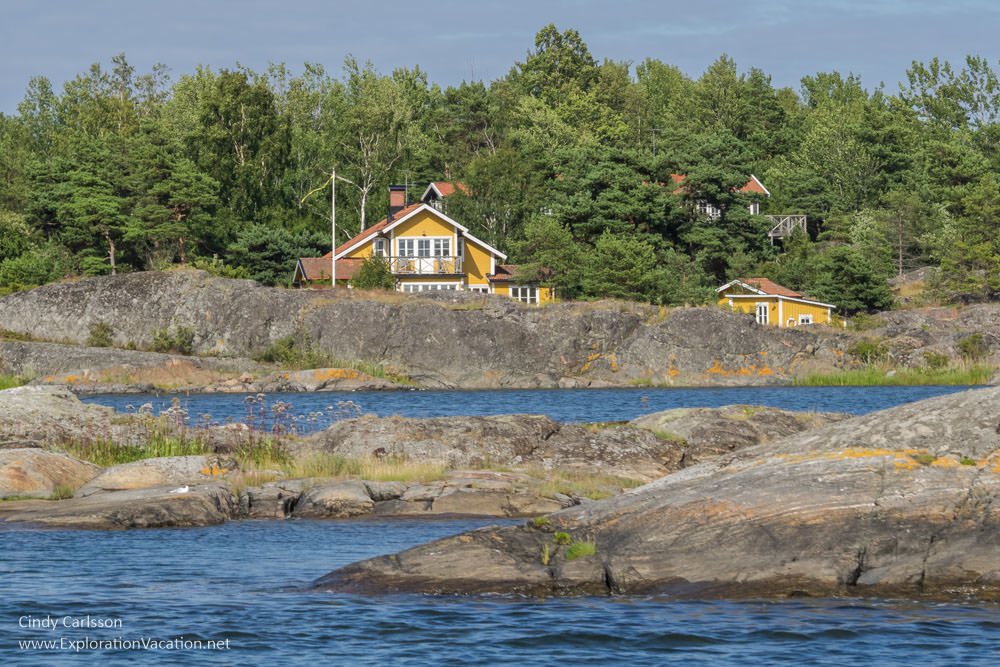 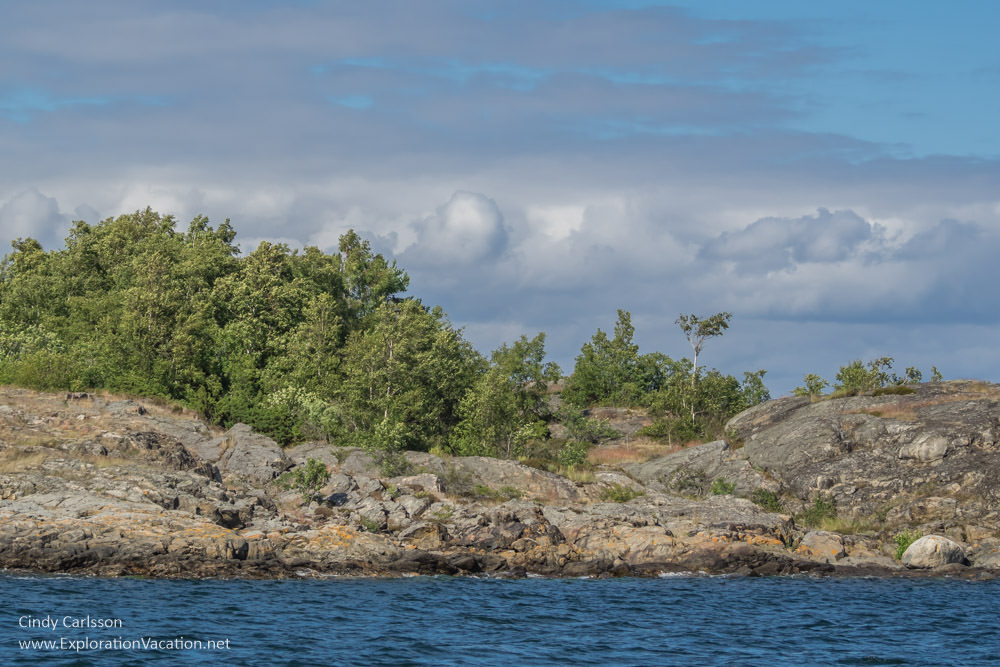 In Landsort itself, the harbor seems too small even for the diminutive ferry. 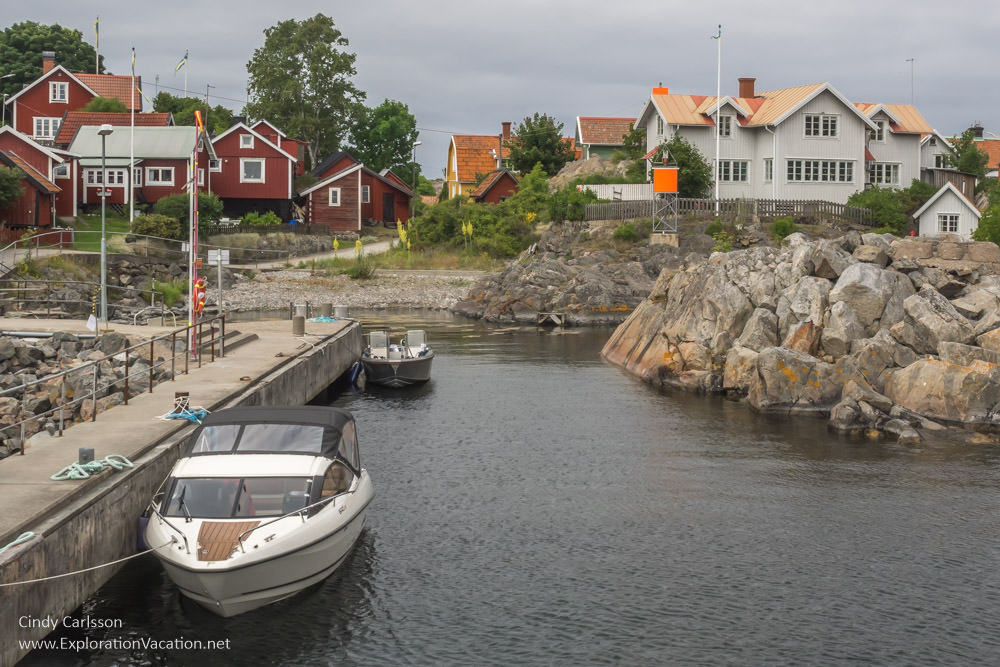 But, of course, the ferry finds a way. 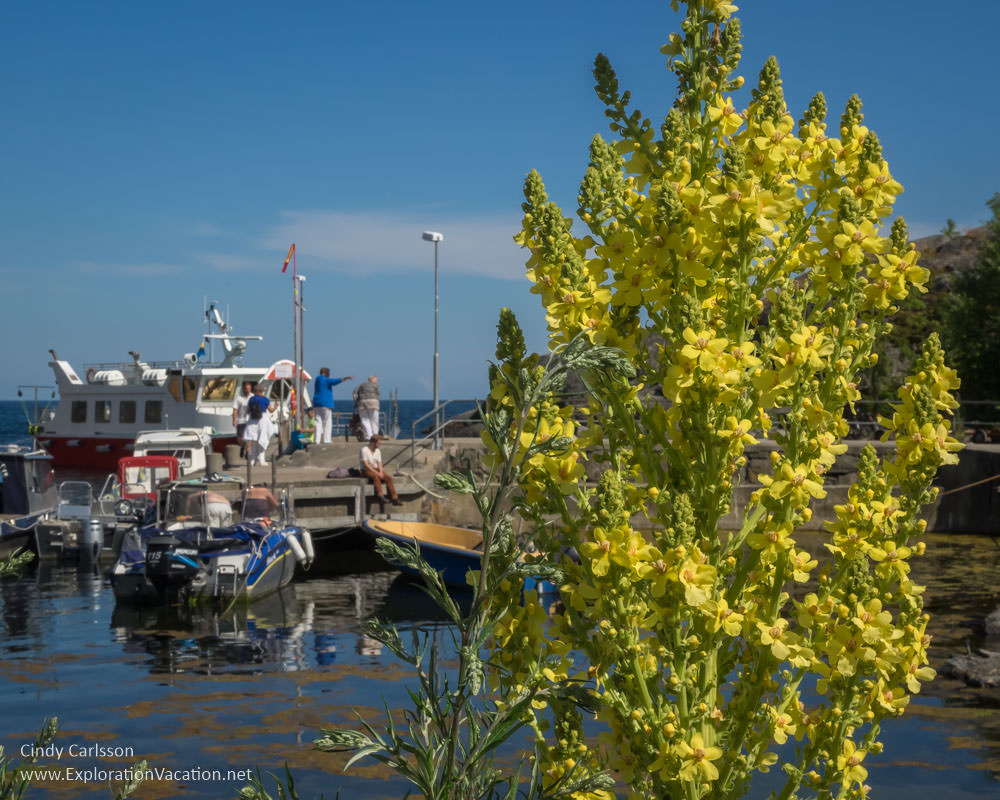 Beyond the harbor, the (mostly red) buildings of Landsort’s Storhamn village spill over the rocky landscape. 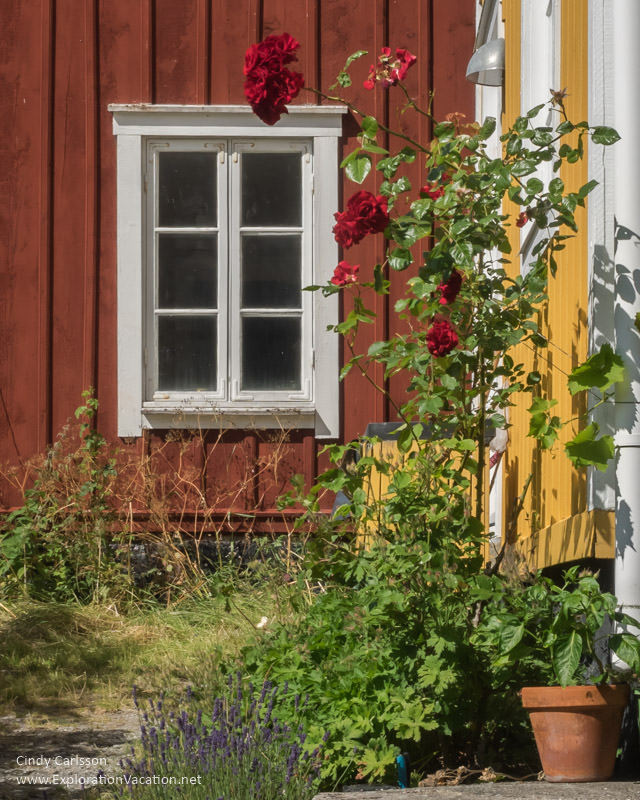 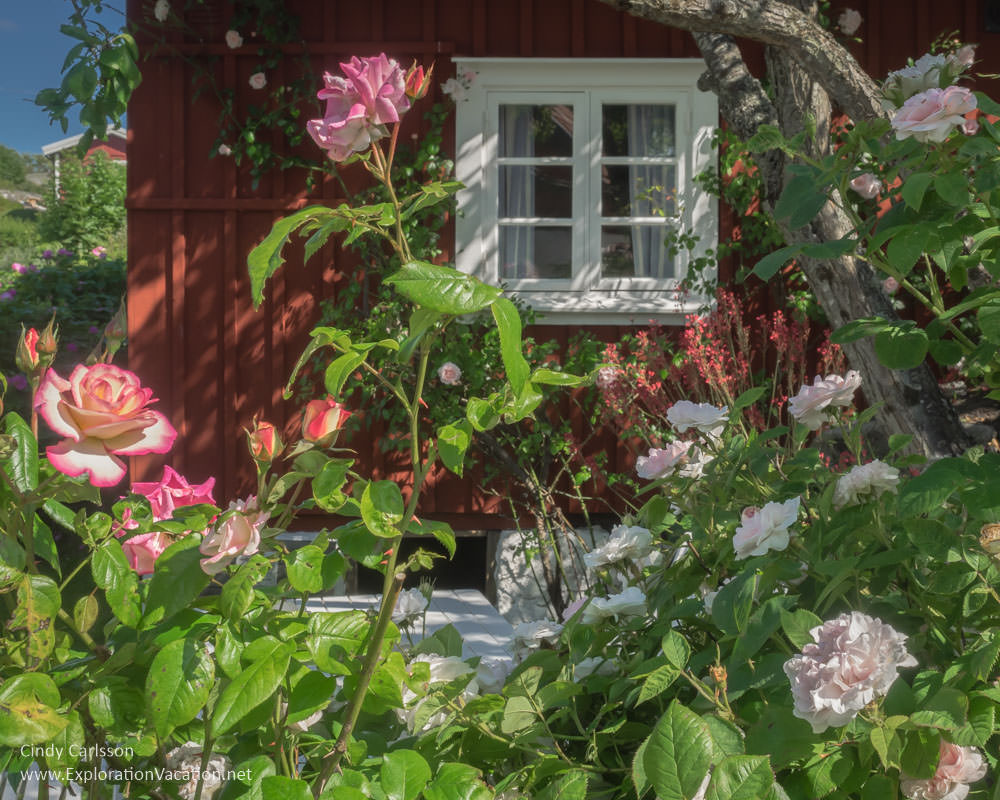 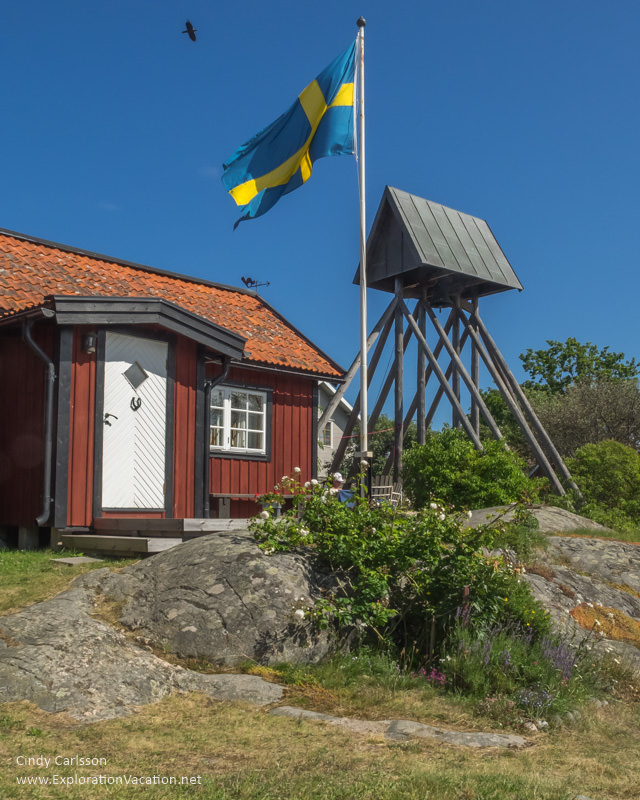 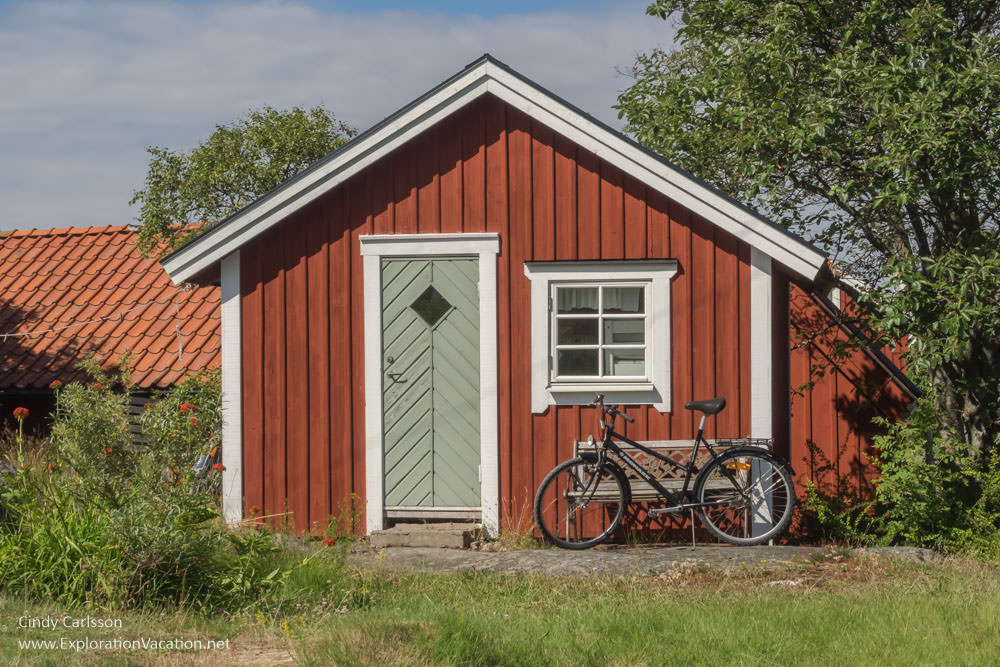 While there are homes spread across the island, this village is the hub of local activity. (What activity there is, as most people come here to enjoy the sea and sun and solitude.) It’s here that visitors find the social sites critical to island life: a couple of cafés, a few shops and galleries, a church, and the post office.

Seeking solitude along a windswept coastline 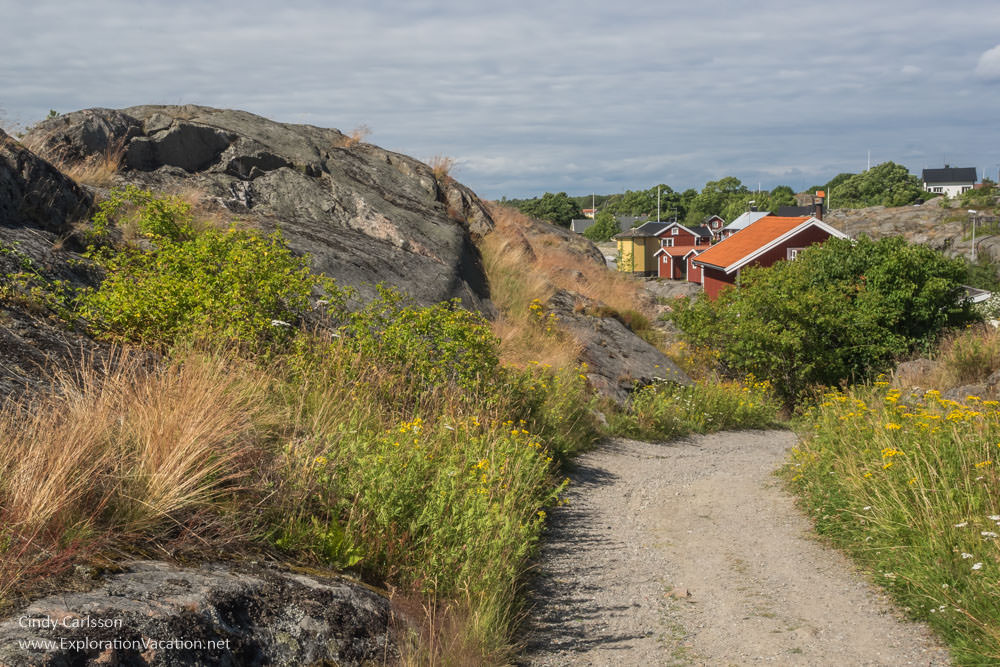 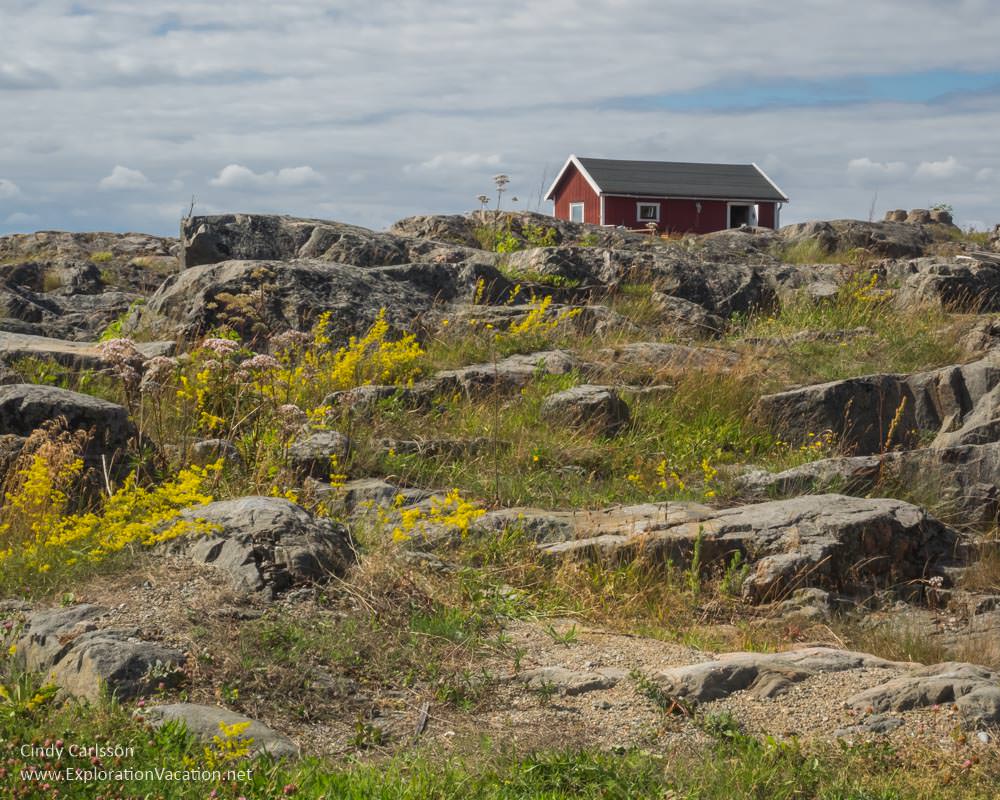 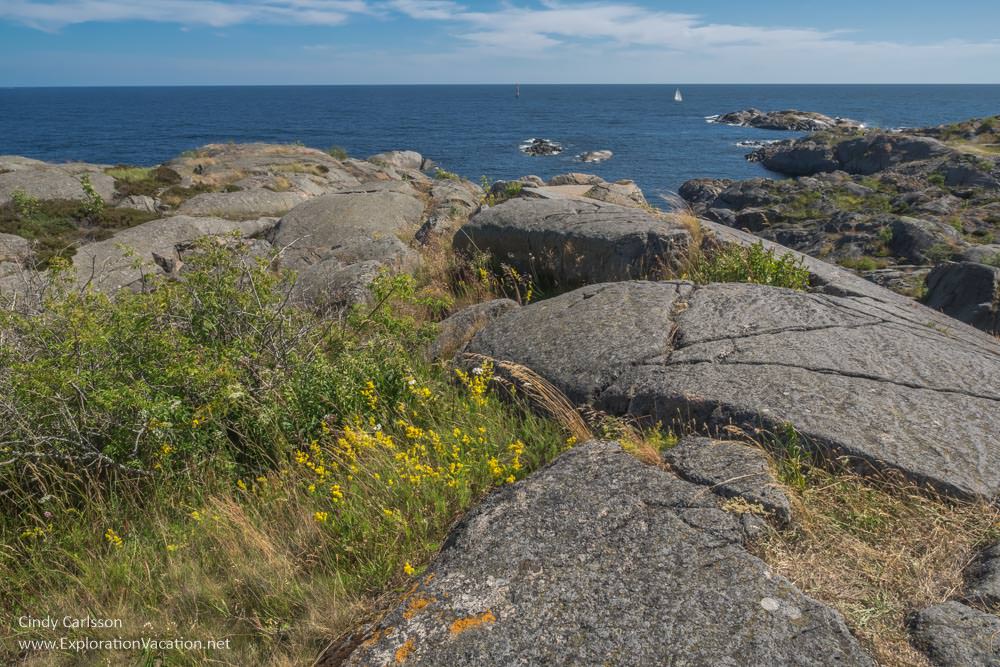 The island is a protected nature reserve and, as such, is home to a number of rare plants. It is also an important rest area for migratory birds. While everyone can enjoy the island’s plant and bird life, Landsort is particularly popular with serious botanists and bird watchers, and the island has facilities developed specifically for them.

Landsort is best known for its lighthouse, which is the oldest operating lighthouse in Sweden. 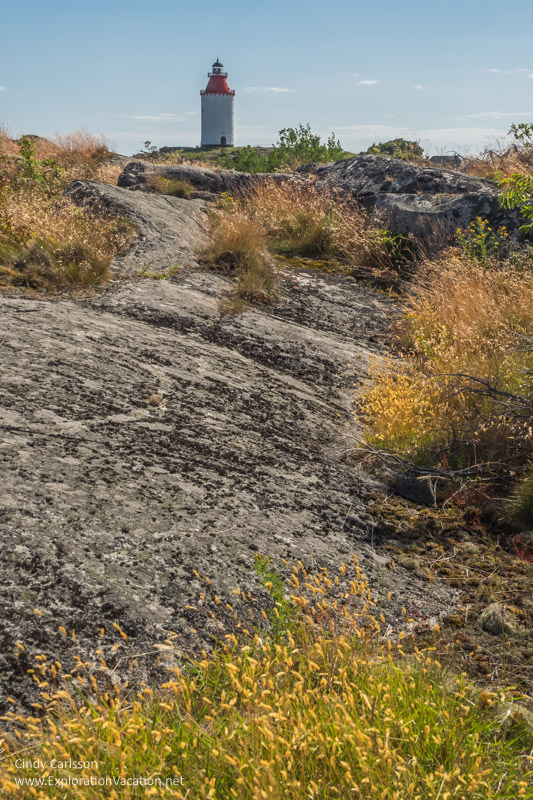 The seas in this area can be treacherous and this site has been used since ancient times to light fires that marked the path home for sailors and fishermen.

The current lighthouse is just the latest incarnation of those early fires. Its tower was constructed in the 1670s. At that time, Landsort’s light was an open fire fueled by coal. This later changed to oil and then to a paraffin-fueled flame. It finally became an electric light in 1938. 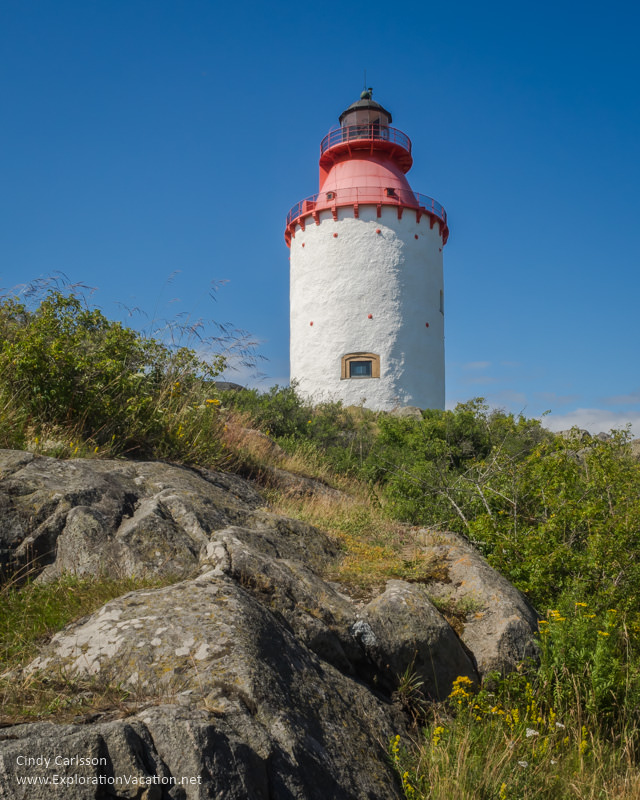 Landsort lighthouse is still in use today, but visitors are welcome to climb the spiral stairs that lead to the top of the 1670s tower. 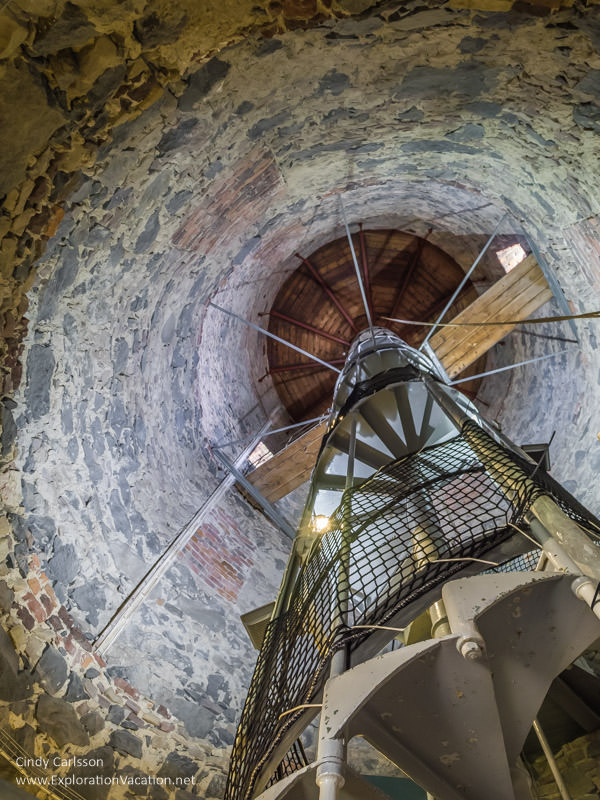 Once at the top of the old tower (you can’t go to the very top of the lighthouse), an exterior catwalk provides magnificent views in all directions. 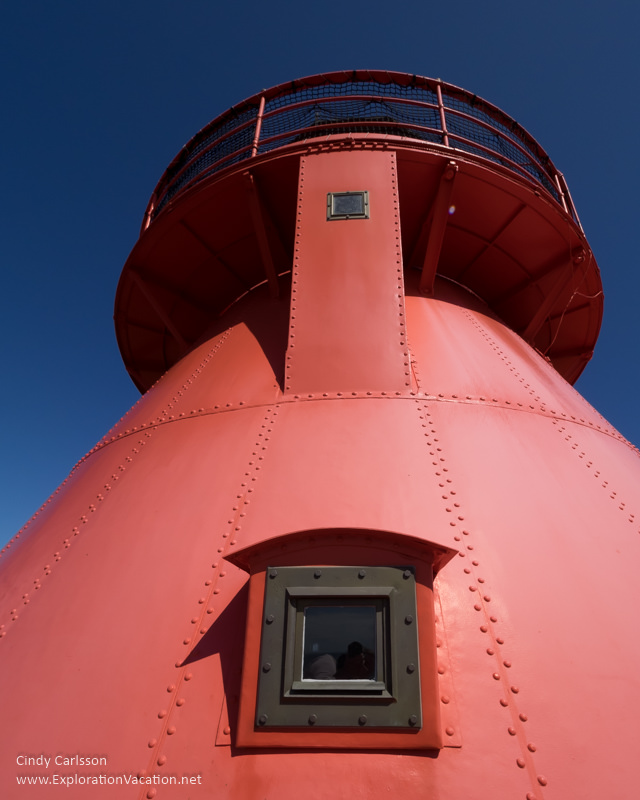 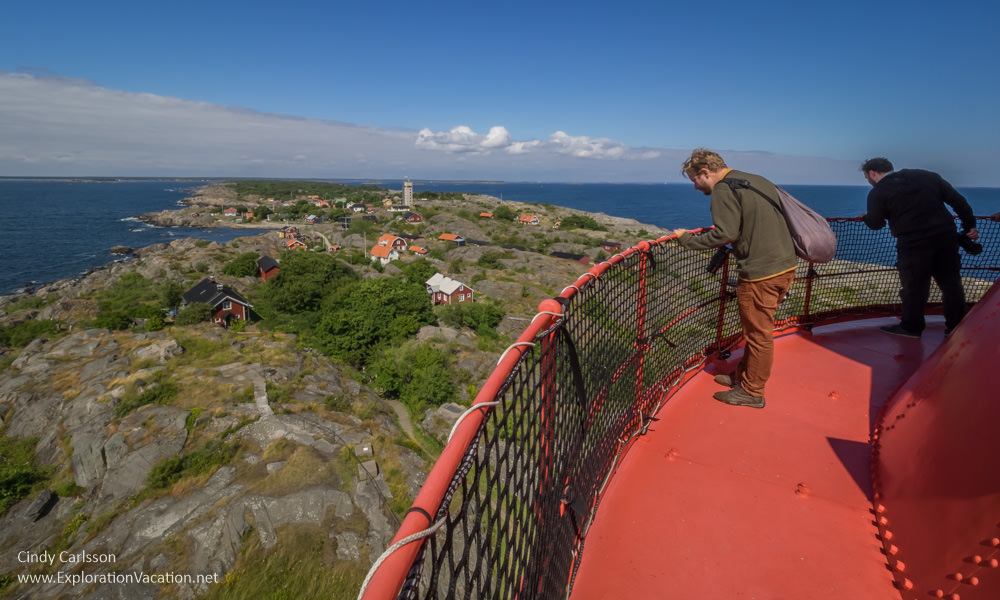 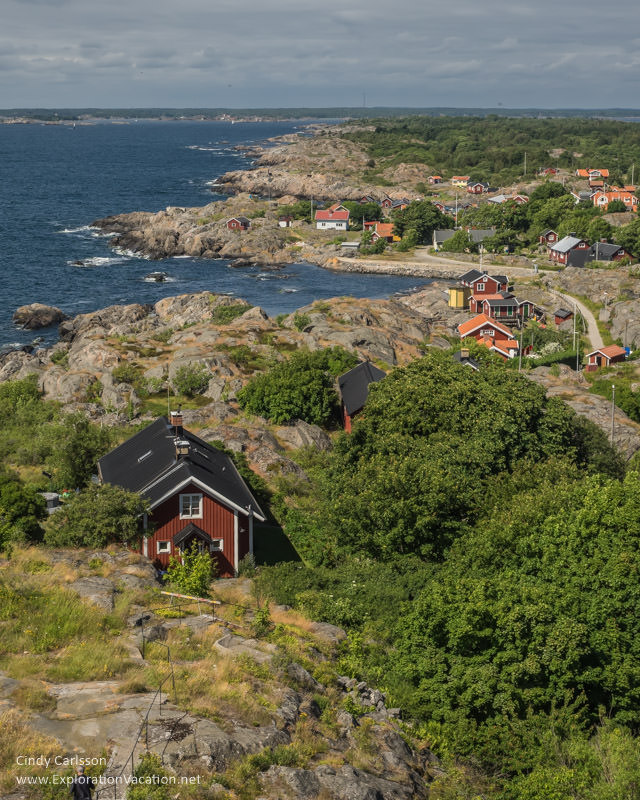 Looking for Öja Island’s military past

The remains of World War II and the Cold War

Öja Island has long had strategic importance because of its location at the southern end of the Stockholm Archipelago. However, during World War II and the Cold War, the island became part of a sophisticated military installation designed to protect Sweden from attack.

Today you can get a hint of this part of the island’s past just by looking closely as you explore the island.

The rock below the lighthouse sprouts a few hard-to-miss gun embankments along with a few less obvious bunkers. 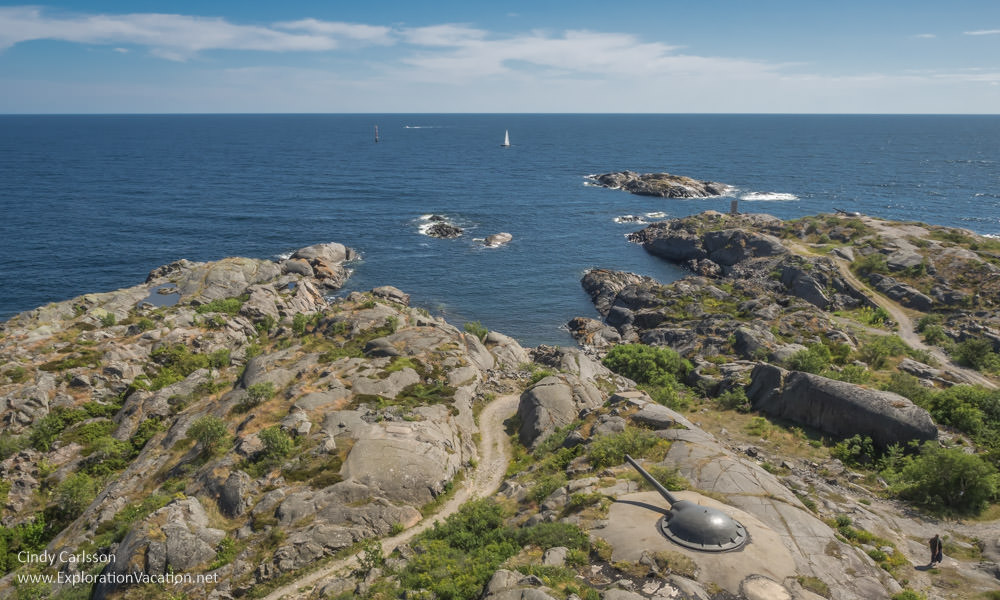 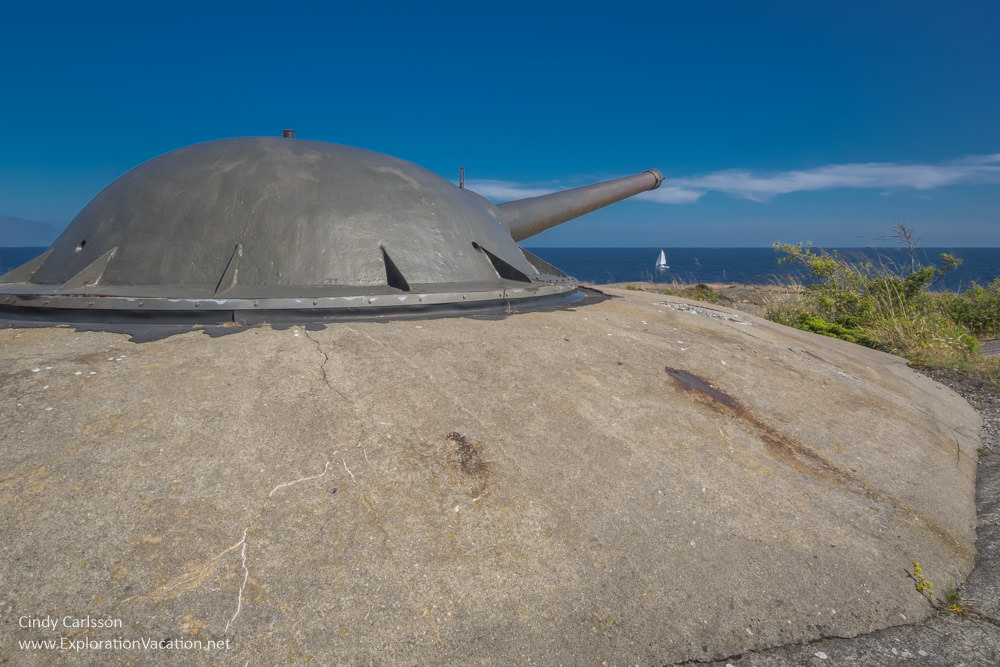 These are the remains of military installations put in place in 1933 – but never used – for World War II.

But there is much that is not visible.

During the Cold War Öja was home to an elaborate network of military installations, most of which were buried far below the island’s rocky surface. One was four stories, all buried underground. Some sections could withstand a nuclear attack. Some supported advanced weaponry with a range far beyond this small island. It was a state-of-the-art system designed to meet any sort of attack.

When all of this was completed in 1977, it was supported by a crew of 300. This was a major facility, one of six protecting Sweden’s coast. And then, with the end of the Cold War, it was taken out of service. (None of the island’s military installations ever saw action in either World War or the Cold War.)

Today, of the original 38 installations here, only five remain, one of which is open for tours during the summer.

The most militaristic thing on the island was mostly used to ensure safe passage through the archipelago.

That massive, militaristic-looking concrete tower near the village was the lookout tower for the island’s pilot boat captains. 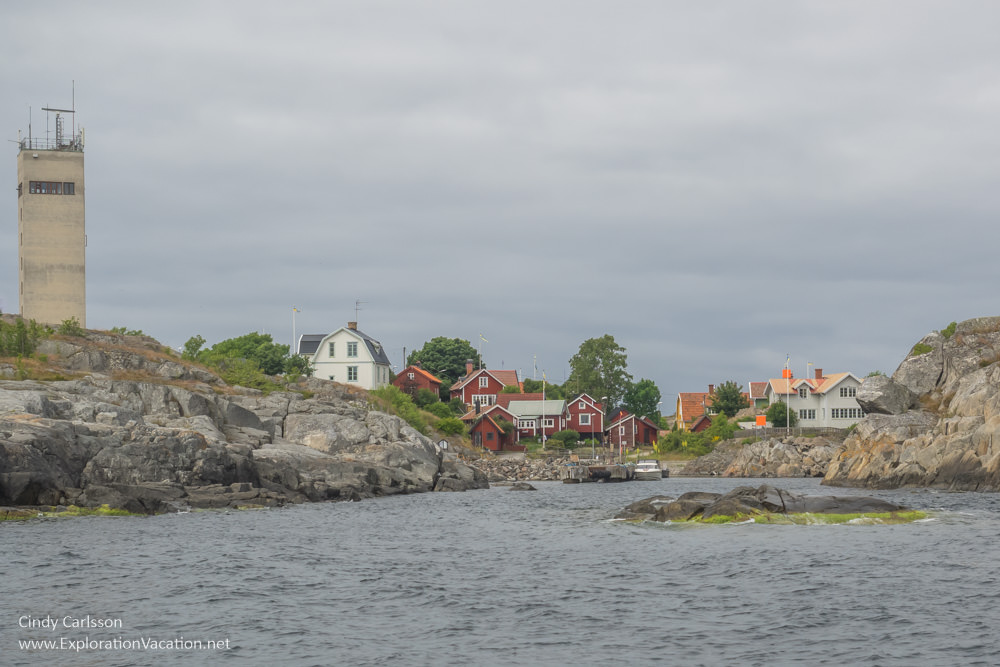 (Because sea travel through the islands is difficult, special captains are required on commercial boats operating here. These captains are based on Landsort. The island is also a base for rescue boat crews.)

While it looks rather menacing, it is now home to a lovely hotel and an observation deck with spectacular views of Landsort lighthouse and the rest of the island! 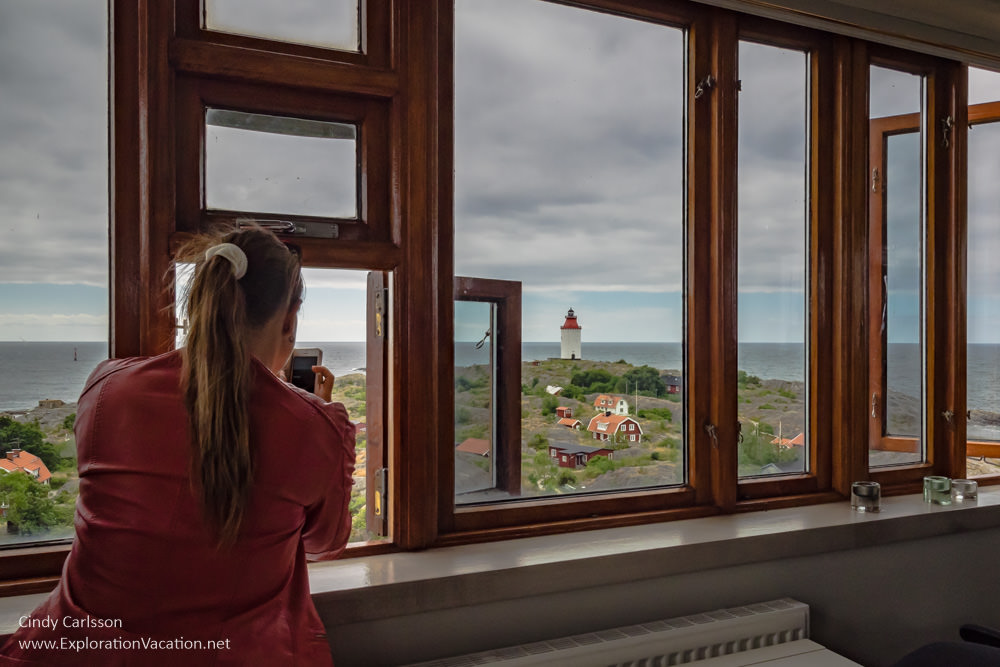 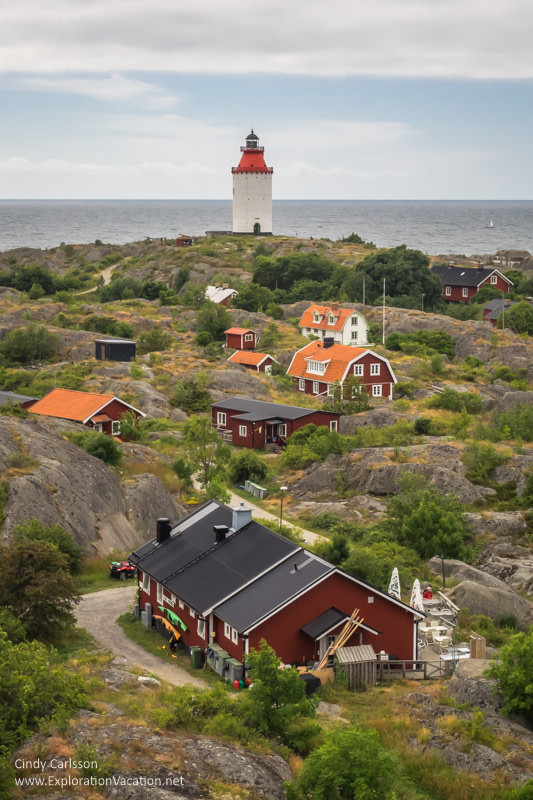 Plan your trip to Landsort

Although it isn’t particularly difficult to get to Landsort, a little advance planning will make the experience more enjoyable.

Located at the far end of the Stockholm Archipelago, getting to Öja Island from Stockholm requires a car or bus trip just to get to the ferry. You also can take the commuter train to Nynäshamn and bus from there.

The passenger ferry to Landsort leaves from the Ankarudden harbor south of Stockholm. (There is no car ferry. Visitors walk or bike around the island.) From there, it’s about a half-hour trip out to the island. Schedules and ticket information can be found on the Waxholmsbolaget website.

If you have time while waiting for the ferry, pleasant Sjöboden Torö (Swedish website) serves coffee and food along the water at Ankarudden harbor.

With a total travel time (by land and sea) of at least 1½ hours or more each way, a visit to Landsort is better done as an overnight get-away than a day trip. Not that it can’t be done as a day trip (that’s how I visited), but it makes for a rather long day.

I didn’t get to spend the night in Landsort, but I’d recommend spending at least one night to make your jaunt here feel like a real vacation.

The ideal place to stay on Landsort is a friend’s family cottage. Lacking that, there are a few other options.

The best views on the island are found in the (now completely refurbished) pilot’s lookout tower. The Lotstornet Svedtiljas Bed & Breakfast (TripAdvisor affiliate link) has a few simple, lovely rooms. All of which have wonderful views. The renovation that created these rooms was a challenge, but the result is impressive. Despite the striking ugliness of the tower itself, this looks like a beautiful place to stay.

While it’s possible that a property on the island may show up on Airbnb or VRBO from time to time, that appears to be a rare occurrence.

The Landsort hostel offers both shared rooms and housekeeping cottages.

During the summer a couple of places in the village serve light meals and snacks.

Skip them. Instead head directly to Restaurant Svedtilja. This is a casual restaurant with a nice view from the patio and great food. Their specialty is seafood, and the bouillabaisse is wonderful. However, my friends claim the burgers are every bit as fabulous as they look.

Resources for planning your trip

The Visit Nynäshamn website used to have a lot of information on Landsort, but that seems to have vanished. That leaves Landsort.com as the best source of general information about Öja Island. It also has a bit of history.

I visited Landsort as a guest of Visit Sweden as part of the TBEX travel blogger conference. However, all views expressed here are strictly my own.

Are you familiar with Rakuten, the online shopping app that gives you cash back when you make a purchase? Did you know you can use Rakuten for travel bookings? Well, you can! END_OF_DOCUMENT_TOKEN_TO_BE_REPLACED