While in Hill Country a few weeks ago, we took some advice from the 1977 country song and headed for Luckenbach, Texas, where there “ain’t nobody feelin’ no pain.”

Waylon and Willy could join us only in spirit, (Waylon Jennings died in 2002 and Willie Nelson was in New York City promoting his new book) but, hey, everybody’s somebody in Luckenbach, so we figured we’d be welcome even without an escort.

In the heart of Hill Country

From Fredericksburg, the route to Luckenbach passes through bucolic ranch country. 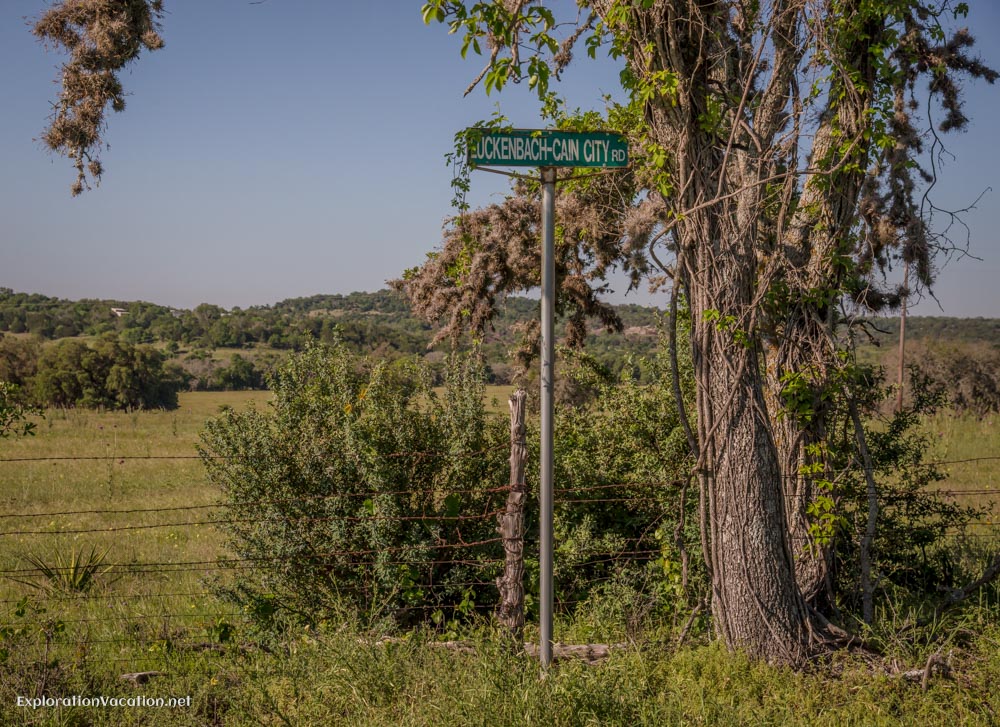 You aren’t really sure you are approaching Luckenbach until you actually arrive – there being no urban, let alone urban sprawl, here.

(That’s the “town” center straight ahead.)

Luckenbach is a real place

Luckenbach today isn’t a town as much as it is a state a mind.

Not that it wasn’t once a town.

It started off small, with the first settlers arriving in the late 1840’s. But the area (called South Grape Creek at that time) already had a post office by 1854.

While that post office closed sometime during the next few decades (no one seems sure when or why), the town continued to grow. By the time the post office reopened in 1886 (now serving Luckenbach), the town boasted a general merchandise store and saloon, cotton gin, blacksmith shop, dance hall, church, and school.

Luckenbach’s growth continued for a few more decades; by 1904 Luckenbach had a population of almost 500. That number fell to about 20 by the 1920s and – with the exception of a brief period of growth in the 1960s – it’s stayed at about 20. Or fewer. The town (actually an unincorporated community) currently claims a population of 3.

Luckenbach is a state of mind

Luckenbach probably would have become just another disintegrating collection of buildings had it not been for Hondo Crouch.

Crouch bought the town site in 1971 and set about creating a culture and mythology that transcended the town’s physical reality. Concerts and festivals and an unexpected hit country record in 1973 brought attention to Luckenbach. That attention increased over the years as the town’s namesake song became a national hit in 1977 (shortly after Crouch died) and Willie Nelson chose Luckenbach as the site for his annual Fourth of July picnic.

Today it is more a state of mind than a real place, but the physical structures that give credence to that state of mind are very photogenic. 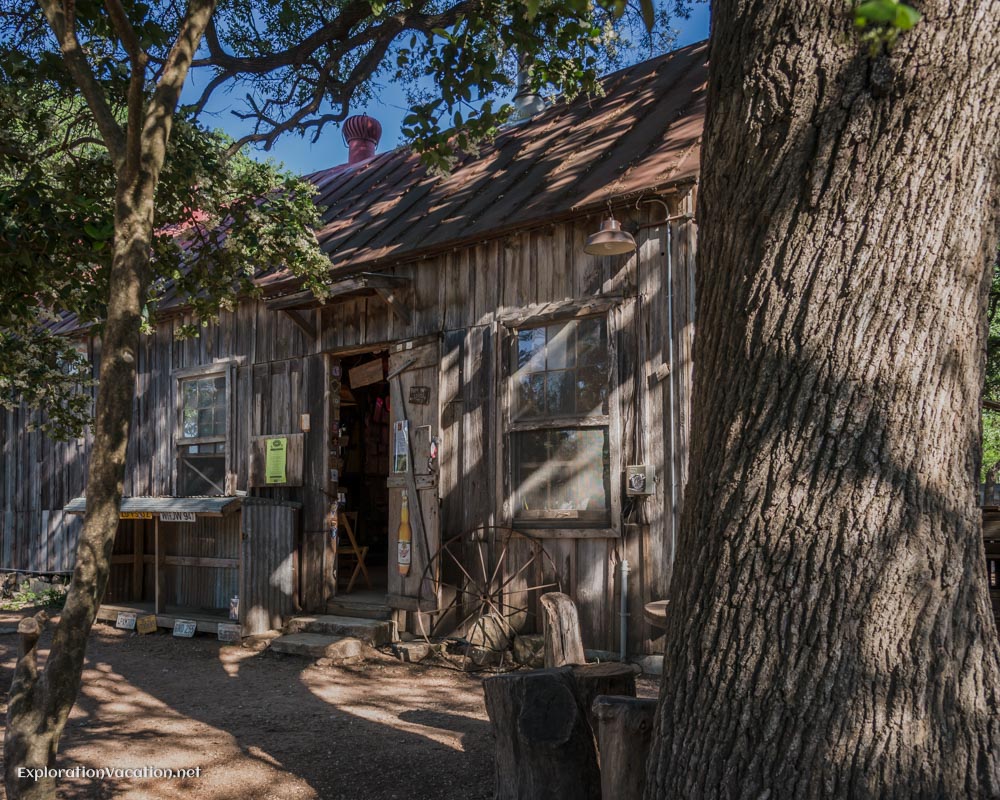 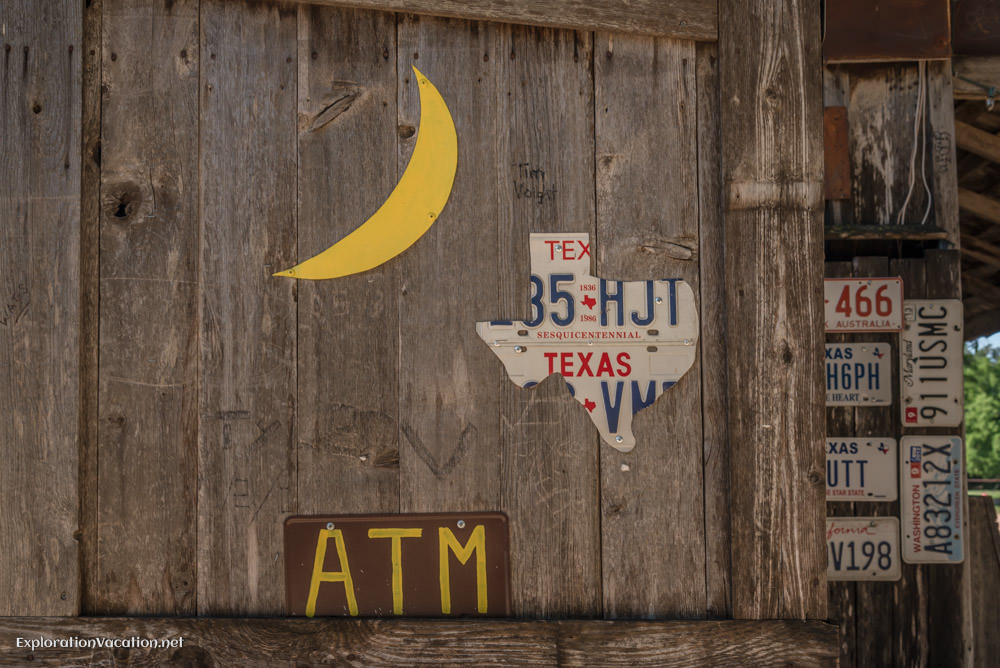 Although the post office closed in 1971, the 1851 general store (with its saloon in the back) is still in business as an odd combination of history and commerce – part souvenir shop, part museum, and part bar. 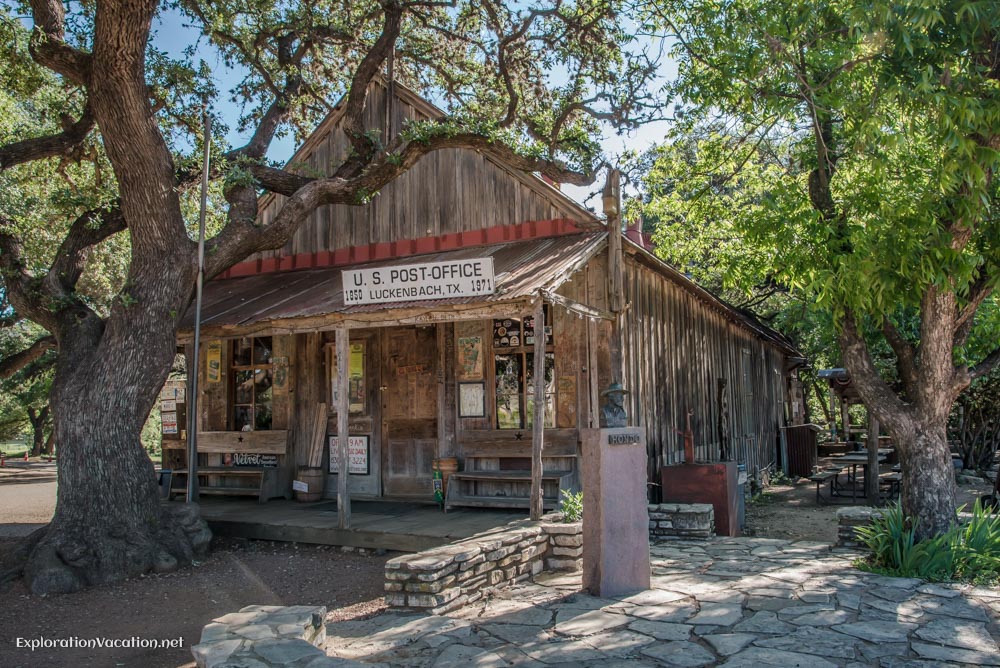 When we arrive, several employees are getting the place ready for the day.

A friendly lady behind the counter in the store is busy with a shipment of goods that just arrived. Still, she chats with me as she works, showing me merchandise as she unpacks it (baby outfits perfect for her soon-to-arrive grandchild) and discusses the latest happenings (some creature has been disturbing the chickens) while reminding me that there is music here all the time. Along the way the conversation turns from her grandchildren to cats and then armadillos.

As I am about to leave she shows me pictures of her daughter; cheerful images of a pretty woman laughing and smiling over a beach towel wrapped armadillo cradled in her arms. 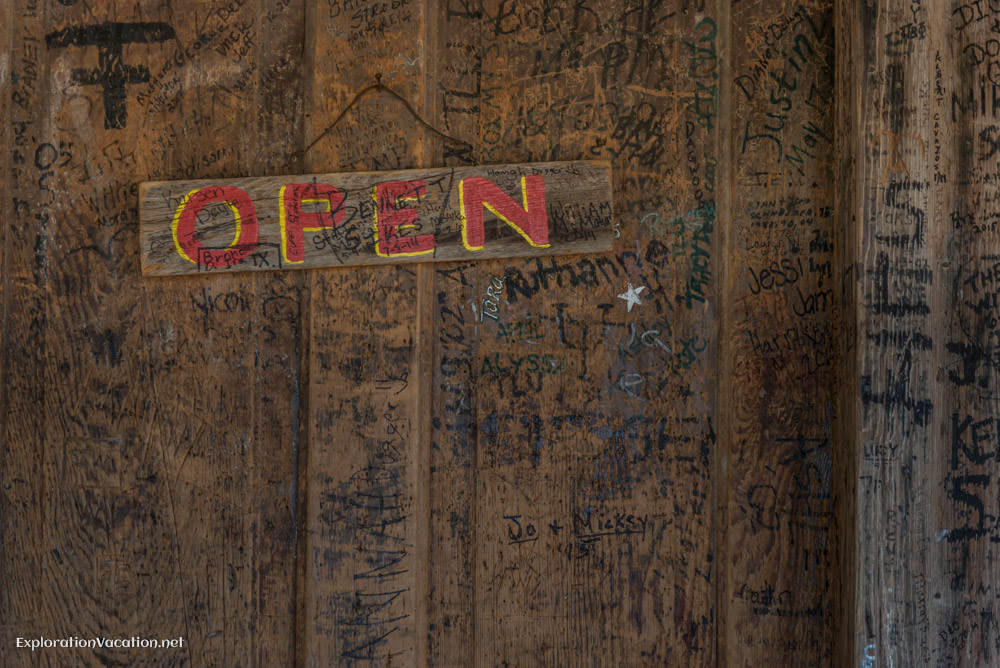 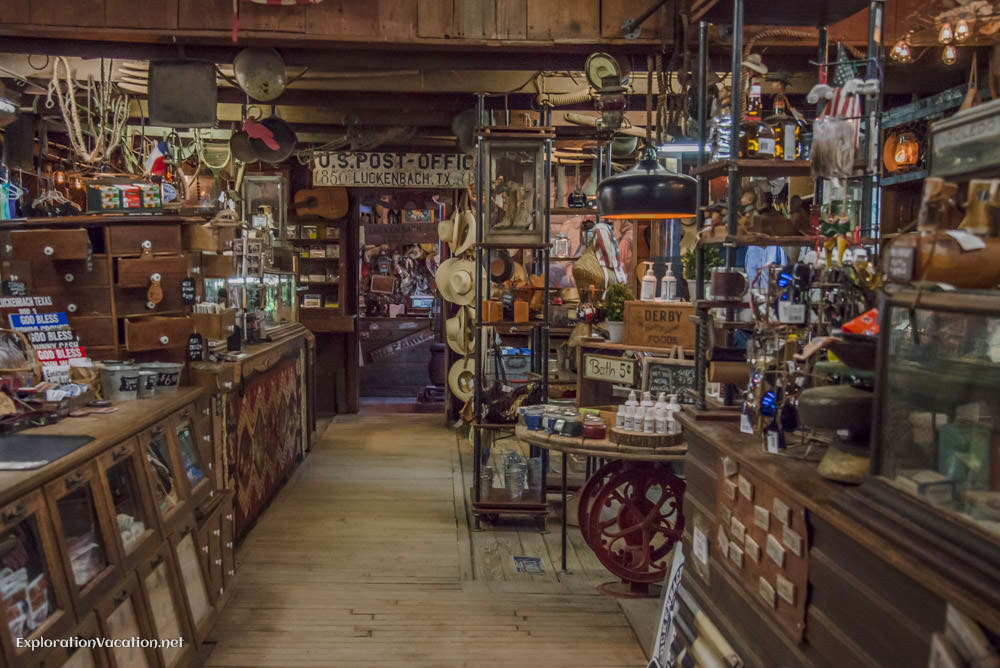 An ideal location for live music

If it weren’t 10 a.m. I’d buy a beer and settle in for a spell and wait to see what happens next.

The rustic stage, picnic tables and benches, and assorted sheds under the oak trees out back look perfect for enjoying a little music over a beer with friends. It’s exactly what I imagined it would look like, only more so.

However, if you arrive early on a weekday morning, as we did, everything is quiet, as if waiting for the evening’s music to begin. 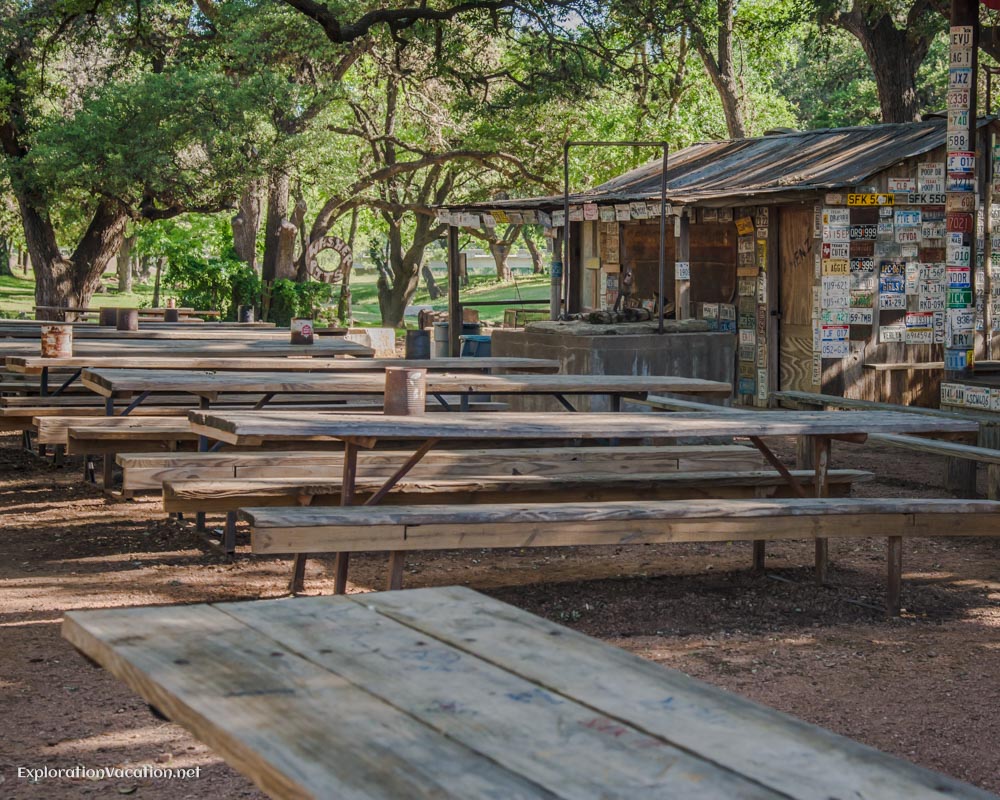 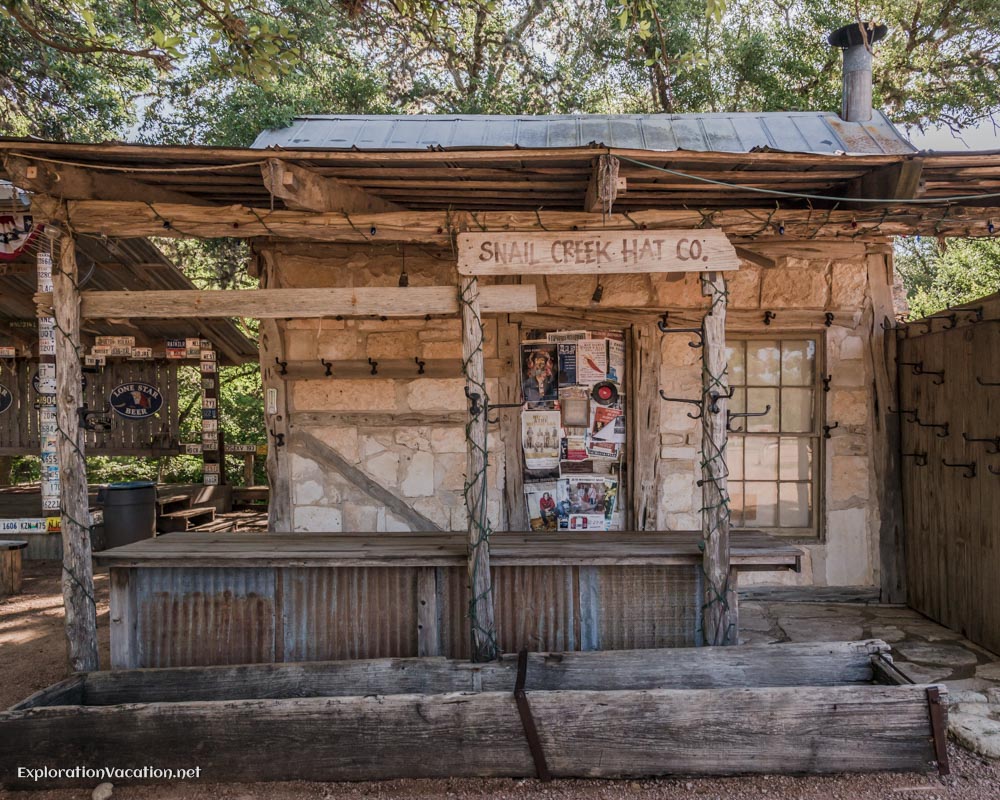 The original dance hall (renovated in the 1930s and probably not since) is more than quiet – it’s literally packed away, the wood floor swept clean, benches neatly stacked on tables.

A sign by the door is a stark reminder that this “state of mind” is also a physical place. . . and one that requires money to maintain. 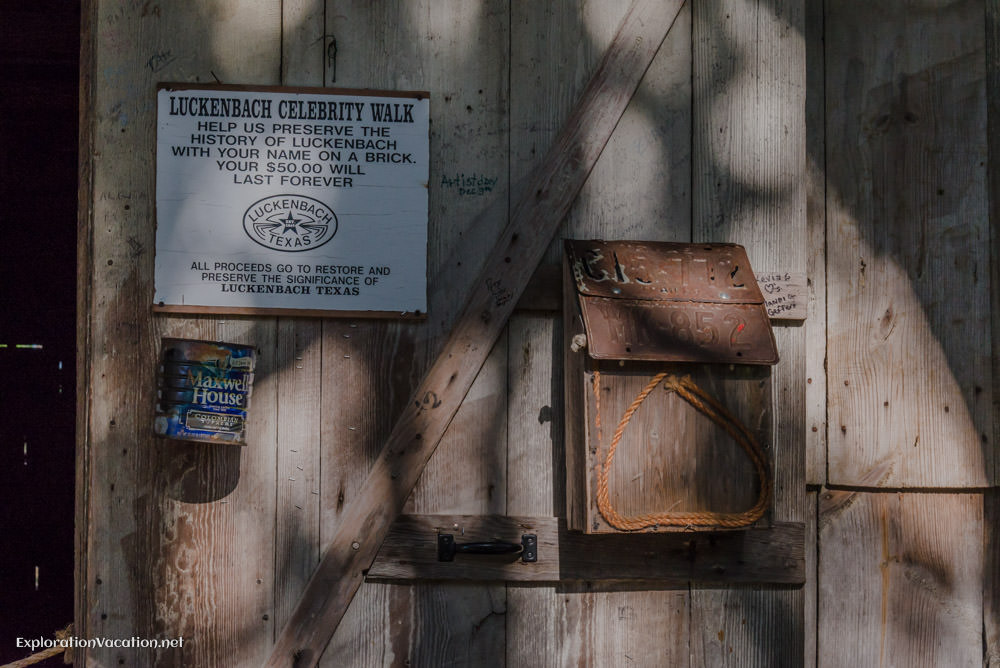 After surviving for a century, the 1881 cotton gin and blacksmith shop are gone, swept away by a flood in 2002. But – at least for now – Luckenbach remains a physical place as well as a state of mind.

Plan your trip to Luckenbach

Luckenbach, Texas, is open for business seven days a week, with a variety of – mostly free –musical offerings each week. It’s also available for private events.

It was quiet when we visited, but traffic cones, rows of portapotties, food stands, and signs indicate that this can become a very active place when musicians take the stage. 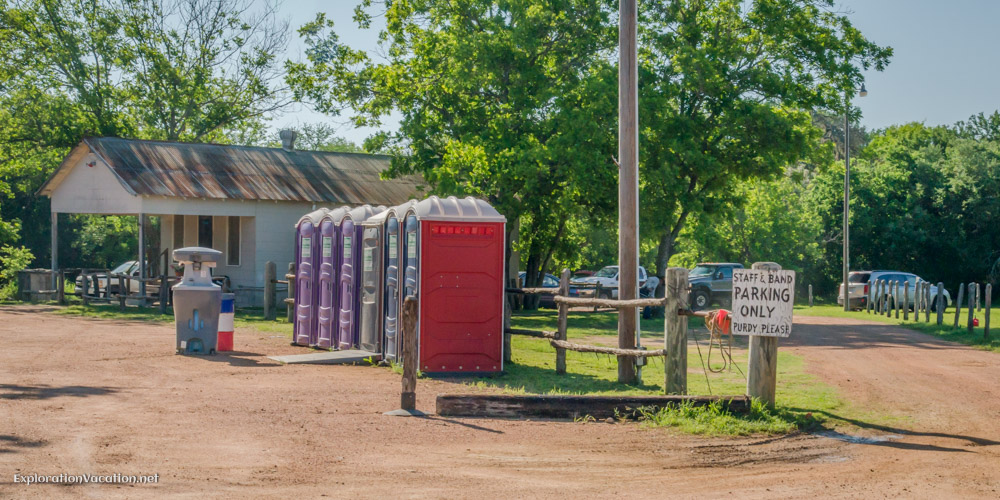 The Luckenbach website has stories on the history of the town, as well as information on current events.

Luckenbach’s story has been highly romanticized over the years; The Man Who Dreamed Up Luckenbach is a more sobering (and probably more realistic) take on how the Luckenbach that exists today came to be.

Food is available for lunch and dinner.

There are a number of Airbnb options in the area and a full range of lodging options in Fredericksburg.

Are you familiar with Rakuten, the online shopping app that gives you cash back when you make a purchase? Did you know you can use Rakuten for travel bookings? Well, you can! END_OF_DOCUMENT_TOKEN_TO_BE_REPLACED