Minute Man National Park attempts to evoke the world as it was on April 19, 1775, when the Revolutionary War began. It’s a tough thing to do, seeing as how the landscape here has changed significantly since that long ago day. It’s hard to imagine what life was like, harder still to imagine a level of discontent that would lead to a revolution against a great European power.We start at the Old North Bridge spanning the Concord River, the place where the colonial militia were first ordered to fire on the advancing British soldiers – an act of treason and the beginning of war.

Today it is a quiet, peaceful place. Instead of the marching soldiers and militia of that fateful day so long ago, today’s visitors are kayakers, bikers, and pedestrians out for a leisurely stroll.

This is the sixth bridge built on this site. Today it connects nothing but a footpath, but in 1775 this was an important bridge on a well-used road.

The British were here on that April day to destroy arms known to be stockpiled in Concord, including a cache on a farm not too far from this spot. General Gage’s orders to the officer leading this expedition were precise:

Having received intelligence, that a quantity of Ammunition, Provision, Artillery, Tents and small arms, have been collected at Concord, for the Avowed Purpose of raising and supporting a Rebellion against His Majesty, you will march with the Corps of Grenadiers and Light Infantry, put under your command, with the utmost expedition and secrecy to Concord, where you will seize and destroy all Artillery, Ammunition, Provision, Tents, Small Arms, and all military stores whatever. But you will take care that the Soldiers do not plunder the inhabitants, or hurt private property.

700 British soldiers were ordered to Lexington and Concord, fewer than 100 of those were sent to guard this bridge. They did so under the watchful eyes of 400 local militia members and Minute Men who kept watch from the high ground just beyond. When smoke rising in the distance led these local Minute Men believed the town was on fire, they marched on the bridge, driving the British to the other side. The British were fired upon and war had begun.

Here once the embattled farmers stood, and fired the shot heard round the world. (Emerson)

Despite Emerson’s poetic words, the war really began at dawn that day, not on the North Bridge, but on Lexington Common where an errant shot (orders had been given by both sides not to fire) lead to a brief skirmish and the first deaths (all American colonists) of the war.

Battle Road follows the route the British soldiers made on their march from Lexington to Concord and back again. They marched out in fine form and returned harassed and under fire as increasing numbers of Minute Men and local militia arrived on the scene.

Today this area is largely overgrown and wooded. It feels isolated and lonely, but in 1775 it would have been an open, well-settled area with rolling fields, farmsteads, stone walls, and few trees. Little evidence of this landscape remains aside from a few restored homes and the Hartwell Tavern. 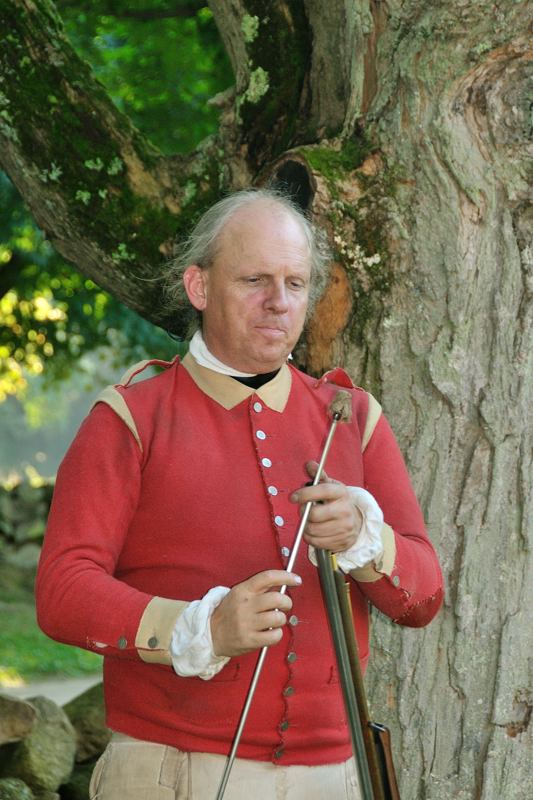 While it is hard to imagine 700 soldiers, dressed in bright red and fully armed marching in formation through this bucolic landscape, it is even harder to imagine that within a day 20,000 local militia members and Minute Men had also gathered. That seems like a big number – no wonder the British were hoping they could ease the unrest within the colonies without resorting to war.