Located along the Canadian border in northern Montana, Glacier National Park shares a boundary with Canada’s Waterton Lakes National Park. Together they form the Waterton-Glacier International Peace Park, a UNESCO World Heritage Site due to the unique ecosystems and plant communities found in the parks. 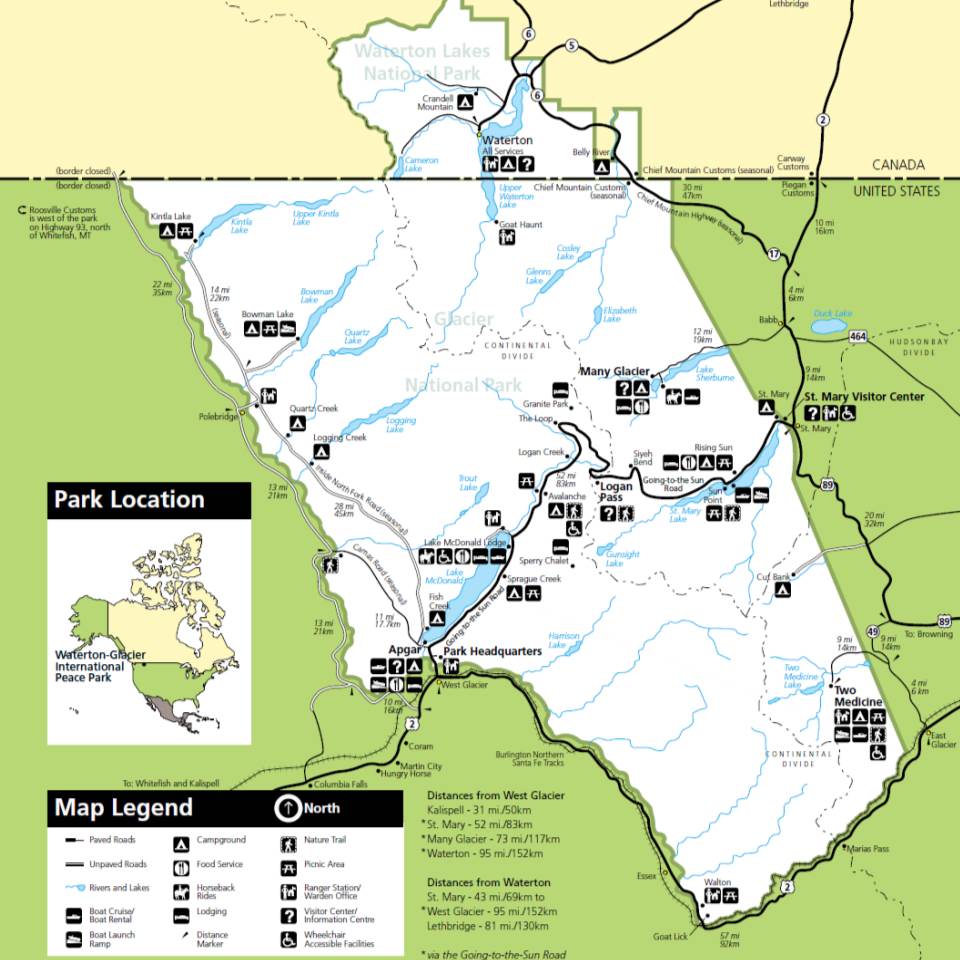 Map from the US National Park Service Vacation Planner (PDF)

With icy blue lakes, towering mountains, abundant wildlife, and the park’s namesake glaciers, a visit to Glacier has long been a classic American travel destination.

However, long before the first modern tourists visited the park, the area was (and still remains) home to the Blackfeet Indians. The Blackfeet knew the area encompassing Glacier National Park and beyond as the “Backbone of the World.” It’s a fitting name for an area bisected by the Continental Divide, six mountains over 10,000 feet, and a bunch of other craggy peaks.

It’s claimed that it was christened Glacier National Park because the area so clearly exhibits the impact glaciation, but its extant glaciers have always been a bigger draw for the generations of visitors who have come to see those icy blankets spread across the mountain tops. Unfortunately, those glaciers are rapidly receding. In 1850 the area that is now Glacier National Park had approximately 150 glaciers, most of which were still present when the park was established in 1910. Today only 25 active glaciers remain, and these are in danger of vanishing within the next few decades.

Going to the Sun Road

Early visitors arrived by rail and then traveled by horseback within the park. However, as the use of private automobiles became more common, roads were built to serve the park. The most famous of these, the Going to the Sun Road, was completed in 1932. It’s the only road that cuts through the park, but it’s a beauty, with 52 miles of narrow roadway with jaw dropping vistas and sheer drop-offs.

Take the road (in both directions) to fully enjoy the scenery, as this is one of the most spectacular drives in the world. Keep in mind, however, that the road is only open seasonally. (When I visited in the summer of 2014 the road didn’t open until July 2. While this wasn’t the latest opening date – that happened in 2011 when the road wasn’t cleared of snow until July 13 – it had me worried right up to the day of our arrival.) In addition, parts of the road are under construction as part of a historically sensitive reconstruction of the entire roadway.

If you are nervous about driving on a narrow mountain road with lots of traffic (it’s busy during the short summer season), you can travel the route in one of the park’s historic red bus Jammers.

If you are in a hurry, skip the Sun Road and take the highway around the south end of the park. The drive is longer and less scenic, but it’s also faster and less stressful.

The Many Glacier area in the northeast section of the Glacier National Park was my favorite area in the park and I’d highly recommend visitors spend some time here. While it may be best-known for its namesake hotel, this area is a hiking paradise, with trails of all levels of difficulty (including a hike to Grinnell Glacier) in a stunning section of the park. Boat tours are also available here, for those looking for a more relaxing way to see the area. For wildlife fans, both grizzlies and black bears are often seen on the hillsides just off the road.

The historic Many Glacier Hotel sits on the eastern shore of Swiftcurrent Lake and provides fabulous views of the surrounding mountains from many of its guest rooms. For those on a budget, the nearby Swiftcurrent Motor Lodge and campground offer less expensive lodging in a forested area just beyond the lakeshore, but without the spectacular views.

Wildlife in the park

We spent the first and last parts of our 2014 summer trip to the northern Rockies.

With a wealth of cultural and outdoor activities, a thriving art and food scene, historical sites, and natural areas, Phoenix is more than a snowbird escape. END_OF_DOCUMENT_TOKEN_TO_BE_REPLACED