Fort Snelling is a military post constructed on the bluffs above the Mississippi River in 1825.

In use through the end of World War II, this fort that once marked the far northern edge of the frontier is now wedged between the river, a freeway, and a major airport.

I have biked and skied the lowlands below the fort on several occasions and have driven past the crumbling buildings of the Upper Post hundreds, maybe thousands, of times. Yet, I’ve never visited the historic post itself, but Gudrun is visiting from Germany and she is taking her son there so I am going too.

There are few visitors here today and entering the fort is like stepping back into another place and time.

Usually the fort tells the story of white Minnesota in about 1827. Today, however, the focus is on life at the fort during the Civil War. That may seem like a strange focus this far from the war’s battlefields, but the Civil War made an indelible impression on the young state. An astounding portion of the state’s population went to the war’s battlefields where they served with incredible courage. It’s the reason the state capitol (completed in 1905) is filled with images of the war.

This morning, the parade grounds is being used by a small group of soldiers practicing their maneuvers. 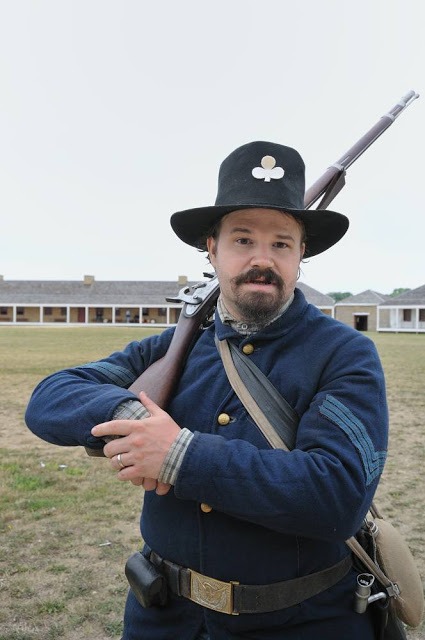 Along with the soldiers, the fort today is home to a number of other costumed interpreters bringing the site to life, from the school,

and the commandant’s house,

and the company store.

Once the morning’s drill is complete, visitors and “resident’s” alike join in a game of baseball.

Even my friend’s teenage son joins in – although I suspect trying to keep a woman in a hoop skirt from stealing second base is a little outside his usual sporting experience!

The activities continue as we take our leave.

I think I will be back here again.