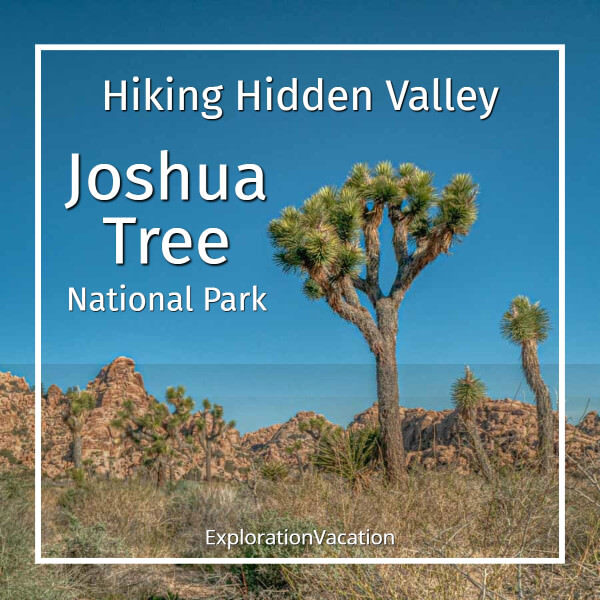 The Hidden Valley Trail showcases some of the Joshua Tree National Park’s best features, thus tends to be one of the busiest spots in the park. We have arrived relatively early, so hope to beat most of the crowds.

On the Hidden Valley Trail

Hidden valley was once almost completely encircled by rock. As we approach, it’s a little hard to believe we’ll find a valley behind the towering boulders.

But that’s why it’s called hidden valley. It’s almost entirely encircled by walls of the giant boulders that Joshua Tree is so well known for. local legends claim the area was used by the

There is only one entrance, one that was enlarged by local rancher Bill Keys. He blasted an entrance that would be make it easier for his cattle to get to the lush grass hidden inside just before the land became a park. But he likely wasn’t the first to make use of this hidden spot. Local legends claim the valley was put to use by cattle rustlers as early as the 1870s. With plenty of space and grass for grazing, it was the perfect spot to hide stolen cattle and horses until they could be rebranded and sold to unsuspecting customers in other states.

Today we follow the well-marked path through a jumble of boulders and enter.

There is one other couple there, so we dawdle, leisurely photographing rocks and flowers and Joshua trees until everyone else disappears down the path.

It’s also an unusual spot, with a broader range of plants than most of Joshua Tree. This unique microclimate is created by those encircling rock walls that block the wind and trap moisture here.

It is incredible to have this place all to ourselves, such a gift to be able to quietly absorb it all completely undisturbed. I’m always amazed by how easy it is to escape from the crowd in our national parks. Sometimes you don’t even have to get off the trail!

Eventually we follow the trail around a bend and further into the valley – the valley is bigger and more varied than I expected, with every bend in the trail bringing a new vista.

Our solitude is unexpectedly interrupted when first one small group and then another and then the remainder of a full busload of Germans join us on the trail and in the rocks above.

I move off the path and concentrate on a budding yucca, convinced that the whole bunch of them will quickly move past us.

Solitude returns to this part of the valley.

For the rest of our visit the only other humans we see are the rock climbers on the canyon walls.

However, as we follow the trail back through the narrow opening between the boulders, we meet many people entering the canyon. Apparently our timing was excellent.

The Hidden Valley Trail near the middle of Park Boulevard on the north side of Joshua Tree National Park. It’s well-marked, with a large parking area and picnic tables. There’s also a small campground nearby. Bring plenty of water and where good shoes. The hike is less than a mile on an easy trail, but there are rocks.

Joshua Tree is less than an hour from Palm Springs, California. Hidden Valley is about another 1/2 into the park.

All US national park posts