In 1998 I celebrated my birthday by meeting the President of a municipality in Portugal, touring the city library, attending an art opening for a Japanese artist, and dining at a fabulous restaurant.None of this was planned. Indeed, had I not been traveling with friends who were much more persistent than I, none of it would have happened.

We were on the second day of a two-week trip to Portugal and had decided to explore the country’s smaller towns. We didn’t have a plan, but were generally aiming for the Roman ruins of Conimbriga near Coimbra.  Noting that there was a tourist information office along the way in the smaller town of Soure, we decided to stop there and seek help in making plans and arranging lodging farther down the road.

We arrived in Soure at mid-day and the tourism office was closed for lunch. This gave us time to explore town a bit. Indeed, it was just enough time for my friends to decide that this is where they wanted to spend the coming weekend. 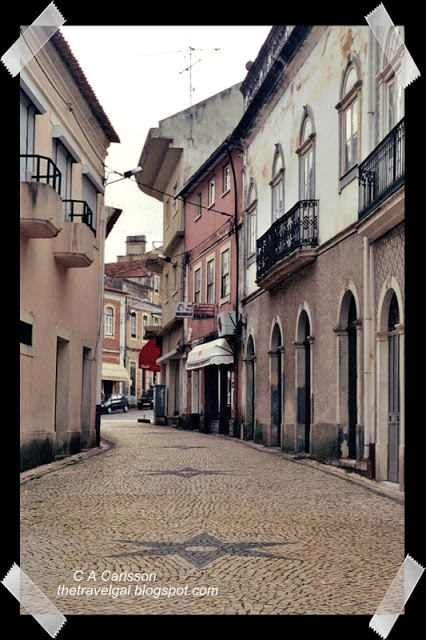 That decision made, all we had to do was make the arrangements!

Of course, the tourism office was still closed.

The sign on the door appeared to direct visitors someplace else if the office was closed. Instead of continuing to wait, we decided we’d just go to this other place and get help there . . . once we figured out where that other place was. We weren’t sure about our translation, but eventually decide it must be city hall. Even if that wasn’t right, surely someone there would be able to help us.

City hall was a busy place, but it was not prepared for clueless English-speaking tourists. None-the-less, the baffled employees wanted to be helpful and finally found a young woman who spoke a bit of English. Perplexed by our questions and unsure of why we came to city hall, she, in turn, directed us to an office at the top of the stairs for assistance.

We went up the stairs and then stopped, confused.

The office that confronted us was huge, grand, and very formal-looking. It was not the sort of place one sends lost tourists.

Not knowing what else to do, we went in to ask for help.

Well, actually, my friends insisted that we go in. I was more than ready to head back to the car and try to find the tourist office in Coimbra.

Instead, I followed my friends into the fancy office. Inside, the bewildered receptionist had no idea why we were there, but she welcomed us anyway. Soon we were rejoined by the woman who had directed us there. Both did their best to show us around and keep us entertained. Thus we were well watched over while we waited for assistance.

The President
That assistance arrived in the form of the city’s young, energetic and fully multi-lingual President.

This was obviously a person of great importance in the city and he was as confused by our presence as anyone (Soure was not a place that attracted tourists), however, he graciously gave us a tour of his office and the council chambers while telling us about government in Portugal, his city (which includes the surrounding towns and villages), and some of his recent accomplishments. He was interesting and engaging – giving us the kind of personal insight into this place that tourists usually only dream of!

Meanwhile, staff had been dispatched to locate the missing tourist office staff. Eventually a very flustered young lady appeared, apologizing profusely and offering to help with whatever we needed.

The Library and Art Opening
One of the accomplishments the President had told us about was state-of-the-art library which was housed in a newly restored historic building. He had also assured us that the library staff would be happy to give us a tour. My friend’s farther was on the library board back home, so he was thrilled by the opportunity to tour this new, high-tech library. Our guide (probably the only English-speaking member of the staff) patiently answered our questions about both the restoration of the building and the library it now housed. It was very impressive. Best of all, from the tower we had a bird’s eye view of the garden and community pool that were part of the library complex and the fields that edged up to the city. All of it was lovely in the late-day sun.

The President had also invited us to attend an art opening at the historic castle that housed the tourism office. The Japanese artist’s work was beautiful and, as the president had expected, we were among the few people in attendance who shared a language with the artist. Besides the chance to enjoy the art, we had the opportunity to talk about politics and Portuguese history with the young lady from the tourism office, her English-speaking boyfriend, and a couple of their friends. (The boyfriend translated the rapid-paced conversation, which must have been exhausting.) There were a lot of questions and a lot of laughter.

The Dinner
We chose one of the nicest restaurants in town for dinner that night, a cozy spot on an island in the middle of the river that ran through town. The waiter spoke a little (very little) English, but was determined to walk us through the menu. That was not necessary, however, as we quickly realized there was a “house special” of some sort. Of course we would have that!

Our certainty about our choice seemed to make the waiter nervous. Soon after we ordered he returned to the table with a little grill, intent on making sure we understood that we had ordered grilled meat. Yes, we nodded. Perfect. That we had ordered grilled meat was really about all we understood, but if that was the specialty of this restaurant, then that was what we wanted!

He returned almost immediately again, this time with a tray that included skewers with various grilled sausages, a basket of bread, and bowls of marinated mushrooms, fava beans, and more. It wasn’t until I finished eating my share that it occurred to me that maybe that was the meal, not just a fabulous appetizer. At the very moment I was thinking this, my friend’s dad (concerned he had used the wrong plate) asked me if that was the meal or an appetizer.

I admitted I wasn’t sure, that I had thought this was the appetizer, but now I wondered.

At that point the waiter slid another table alongside ours.

Obviously that was the appetizer.

Along with another set of amazing side dishes (vegetables, beans, and more), out came the little grill again, this time stacked with the perfectly cooked pork, steak, lamb, and shrimp. Every bite was fabulous. This was followed by cookies with a lemon liquor and cake with a very nice port.