A Long Day on the Road

It is a gorgeous morning: A slight breeze (unlike yesterday’s relentless wind), blue skies, and bird calls. We eat breakfast in the dinning room and then hurry outside to wait for Kaiser. While we wait we watch brightly colored birds flit around the bird feeder in the garden.

Our itinerary for today says:

Depart early in the morning for Tsodilo Hills, about a 5-hour drive, where you will spend two nights. Once there those who wish can climb the hills with your guide and explore the magical hills, home to over 3000 Bushman rock paintings that are prehistoric in age. Tsodilo Hills is Botswana’s only World Heritage Site and home to the largest concentration of prehistoric rock paintings in the world.

After a trip into town to gas up the truck, we are on the road. 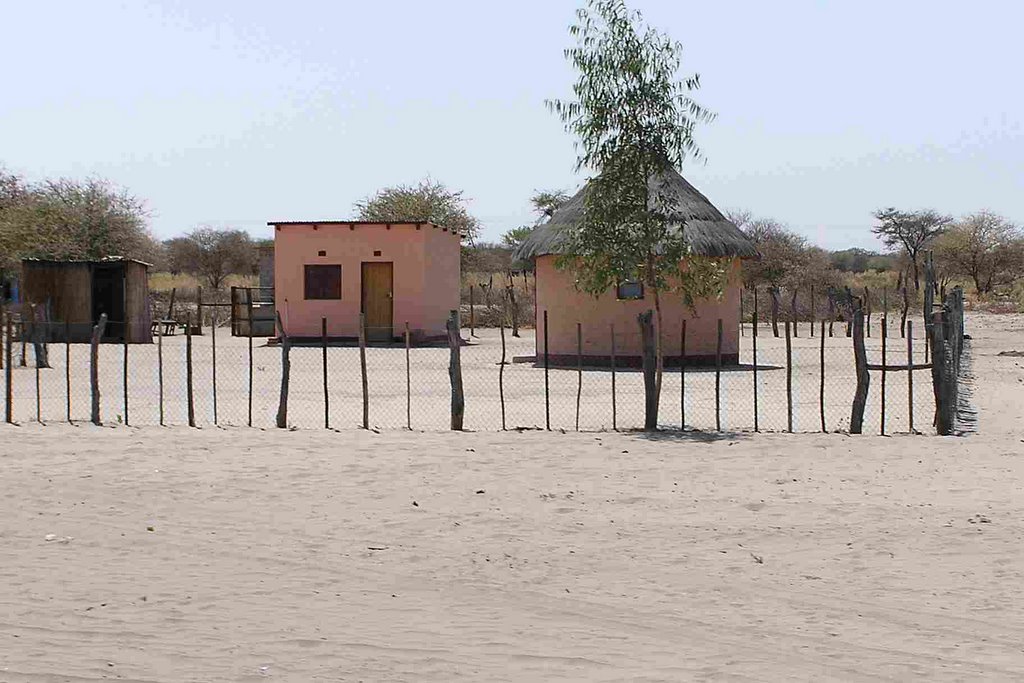 It is still today and as we travel I have a chance to study the rondevals we pass.

The style of construction is changing as we move north. Near Maun almost all are plaster with thatch roofing, few have kraals. As we drive, increasing numbers have reeds or wood of some sort lining the exterior and almost all are enclosed by a reed kraal. 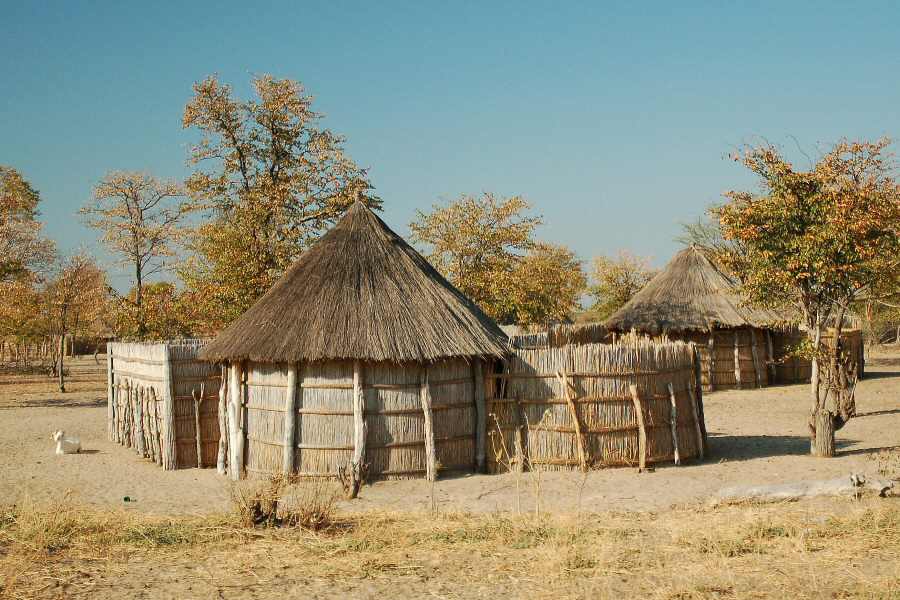 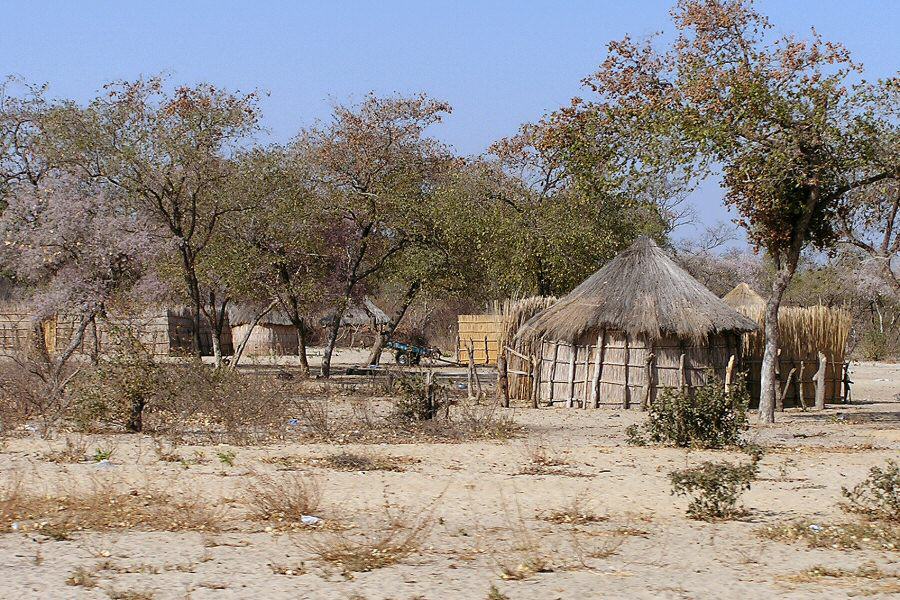 Apparently it is home repair season. I suspect we are here during the window between the availability of adequately dry building materials (thatch for the roof and reeds for the kraals) and the start of the rainy season. Every small group of houses seems to have a stack of bundled thatch and at least one building under construction or reconstruction. 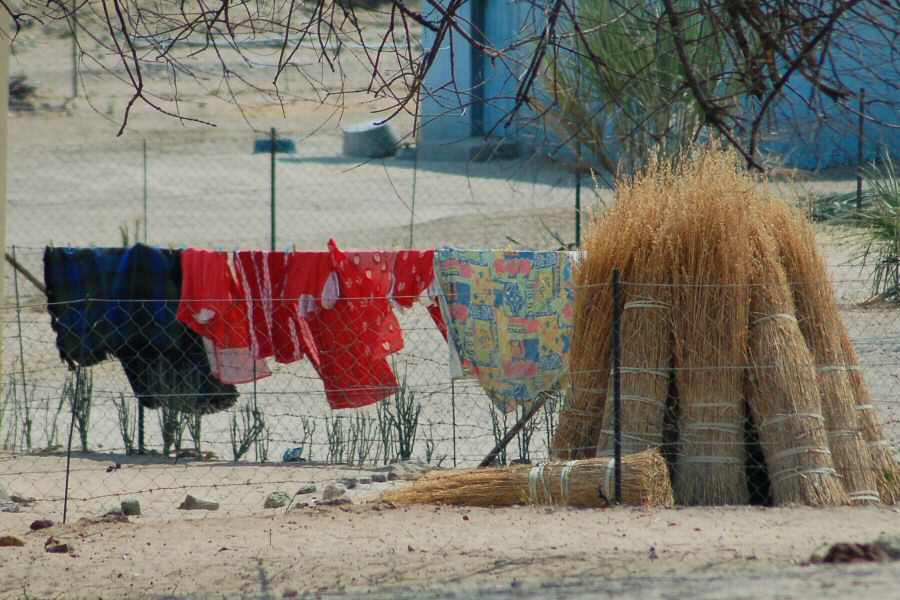 I am surprised by the number of homes that look either abandoned or never completed. Some are rondavels and some are “modern” block structures. I noticed them in Maun and now I see them regularly along the road. It reminds me first of Ireland, where half-collapsed stone cottages dot the countryside; silent reminders of a time when the land supported a much larger population. But in Ireland these abandoned homes were remnants of 19th century famines. A rondeval’s thatch roof usually lasts less than ten years. These homes must have been abandoned within the last 20 years – if not much more recently. 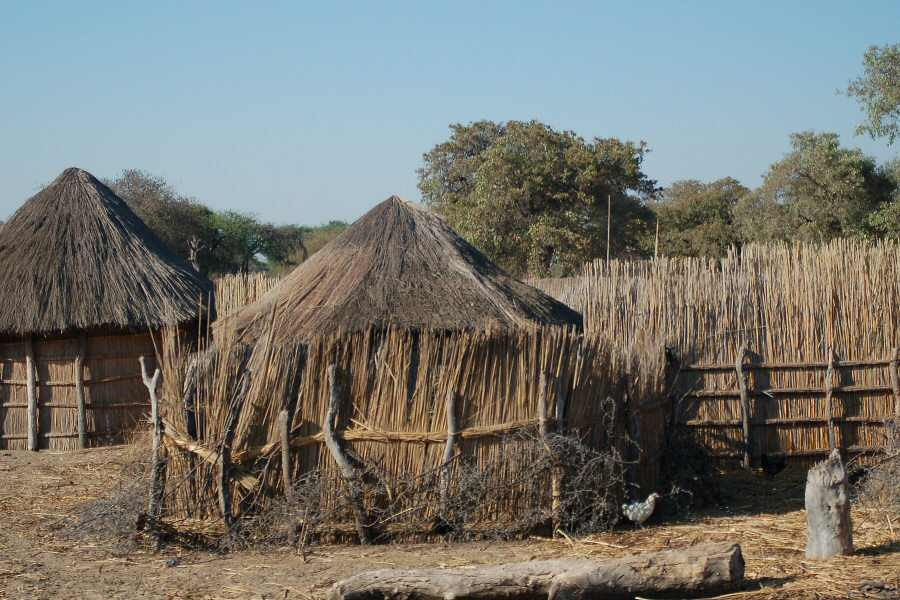 Could this be the impact of AIDS? The travel books assure that, despite Botswana’s high rate of AIDS, casual travelers will not be aware of the disease or its impact. While I’m not convinced that it is good to be able to travel through a country without being aware of an issue of such magnitude, it is indeed easy to do so in Botswana. So now, as I look at these crumbling homes I wonder what they are telling me.

As I look more closely, I realize that a significant number of these seemingly abandoned structures have never actually been completed. Piles of cement block sit beside unfinished walls. How long have they been like this? A few months? A few years? Longer?

Is this the impact of AIDS, visible in the same way the potato famine is still visible in Ireland, or is this more like Corfu, where half-built houses dot every hillside because the need to maintain an image often clashes with fiscal reality? Are the Batswana so determined to build a house that they work on it one tiny piece at a time, sometimes abandoning the project for years on end? I don’t know the answer, but I wonder and hope to ask when we visit the village tomorrow.

Sometime after noon we pull off the road and park in the shade of a large camel thorn tree. The camel thorn has little yellow pom pom flowers like the sweet thorn, but they lack the amazing fragrance. Kaiser tries to get me to guess the tree’s name by showing me the seed pods, but camel-shaped seed pods just look like odd-shaped ovals to me. I fail Kaiser’s quiz and he has to tell me the answer.

We are here because we waiting for the supply truck, which has our lunch. We have gone without lunch most days on the road. For most of us, the lack of lunch hasn’t been much of a hardship – we tend to have ice cream bars for lunch when we travel anyway, but it clearly has bothered Kaiser. He is impatient for the truck to arrive.

As we wait, Kaiser studies his snake and reptile book. M is very interested in snakes and has joked that he doesn’t care about the Big Five (rhino, lion, elephant, Cape buffalo, and leopard, which are the Holy Grail of African hunting). No, he wants to see the “Big Three,” which for him are the black mamba, Egyptian cobra, and puff adder – three of the most dangerous snakes in Africa. I suspect Kaiser has had few groups that even want to identify every snake they see, so he probably feels some pressure to brush up. Of course, aside from M, none of the rest of us REALLY want to come across any of these either. We are quite content restricting our viewing to harmless varieties, like the mole and stiletto snakes we have already come across.

This area is brushier than where we’ve been previously and the trees are taller. There are small herds of cows, but not much visible wildlife, aside from a few ostriches. However, Kaiser shows us where a small herd of elephants came through recently. He tracks them a bit to see if they are still nearby, but they have moved on.

We are eager to move on as well. We want to get to the hills in time to do some hiking yet today and know we still have a long way to go. After awhile, frustrated by the failure of the supply truck to arrive, Kaiser also decides to move on.

Now the landscape begins to change subtly. The sand becomes redder, the trees thicker and taller, and there are cultivated fields – mostly sorghum, we are told. Most of rondevals are often sided in reeds and have kraals surrounding them. Rather than fences made of large sticks strung with wire, the fences here are largely neatly aligned piles of thorny shrubs. 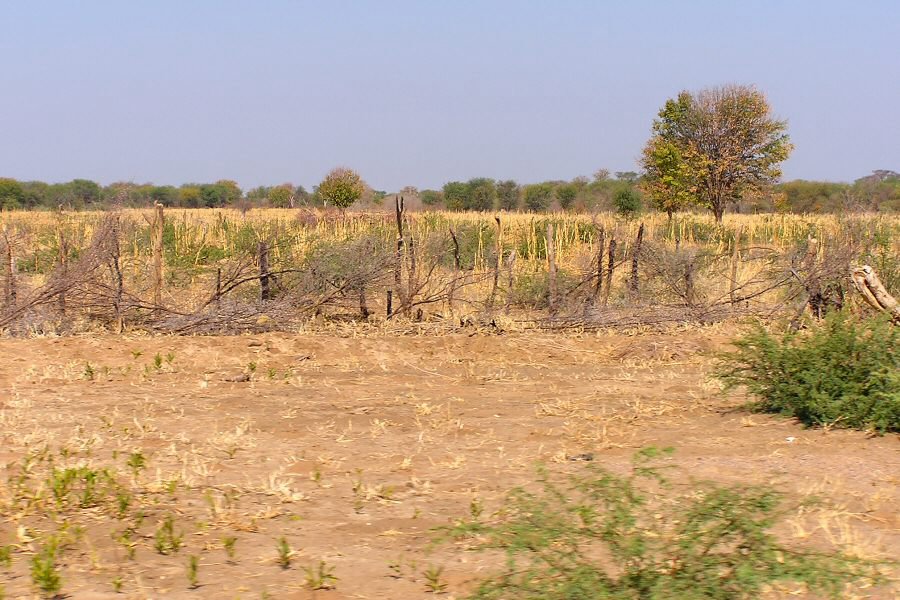 We stop and wait in the shade of another tree late in mid-afternoon. This is where we will turn off the main to head to the Tsodilo Hills. We now know that we will not get there in time to hike today, but we are still hoping to arrive before dark.

We wait a long time, surrounded by scrub and herds of goats. There is a small stand or store of some sort across the highway, but Kaiser doesn’t say much about it, so I stay in the truck and write. Besides, the supply truck will be here soon. Later I will find that the stand sold, among other things, local baskets.

At long last the supply truck arrives. They explain that they have been delayed by a loose drive shaft, but it is fixed now. Yay – we can still get to the hills while there is light! But the staff has other ideas and they begin to set up lunch. It is 4:30 p.m. now and we argue that we would rather get going and eat when we arrive. Our protests fall on deaf ears. They want to eat now.