We are up a little extra early for today’s game drive, so it is just getting light as I eat my yogurt.

We start off heading east into the sun, seeing the usual gemsbok, springbok, and jackals. At Letiahau waterhole we find a good selection of antelope, but they scatter quickly as we approach.

But the too-quickly scattering antelope are quickly forgotten when M spots a wildcat resting in the shade of a nearby tree. The African wildcat is the ancestor of our domestic cat and, sure enough, looks like an overgrown gray stripped house cat. This one lets us observe it for some time, moving to the other side of the tree, but not immediately moving out of sight. 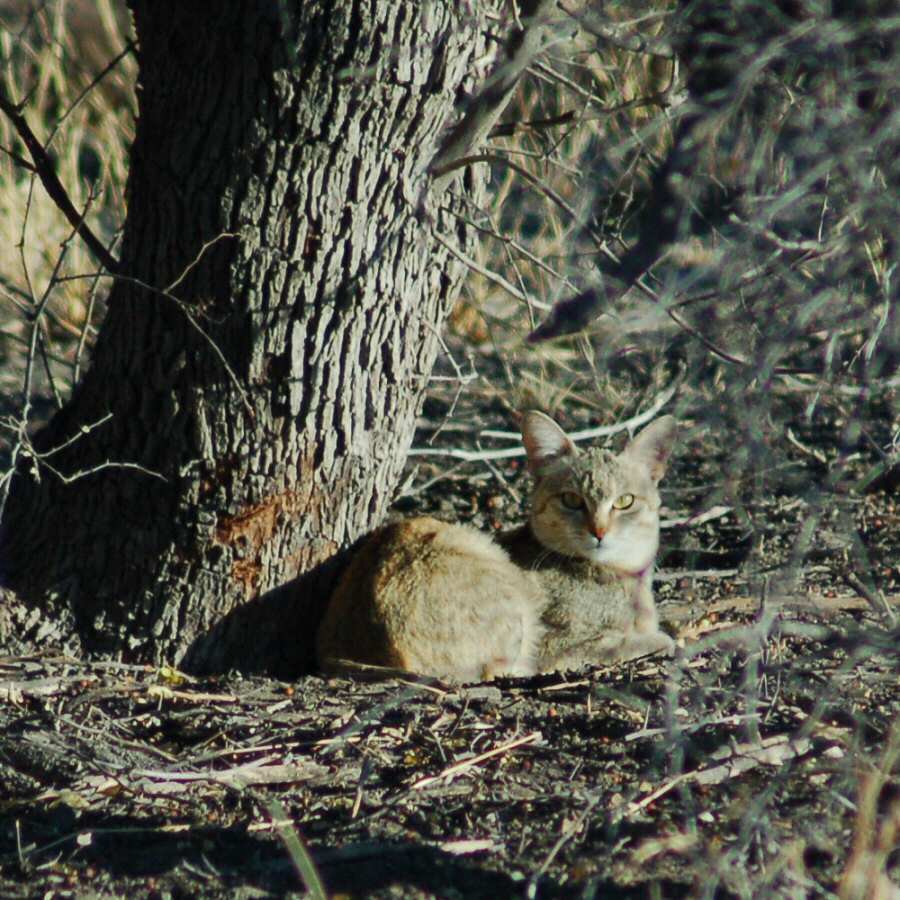 The wildcat is the warm-up act.

We tell Kaiser that now we want to see a cheetah and, very soon, he says he sees one. All I see are lots and lots of springbok. However, after a bit of searching, we all see it. Or rather we see them: A mother and her four cubs are moving through the brush across the road, quite far from the nervous springbok. Soon we have a better view . The mother is probably teaching them to hunt, but mostly they appear to be practicing creeping through the brush – it is not open enough for them to make a kill here. It is a delight to watch as the cubs alternately mimic the graceful movement of their mother and stop to play as jackals skulk nearby just in case there is a kill. 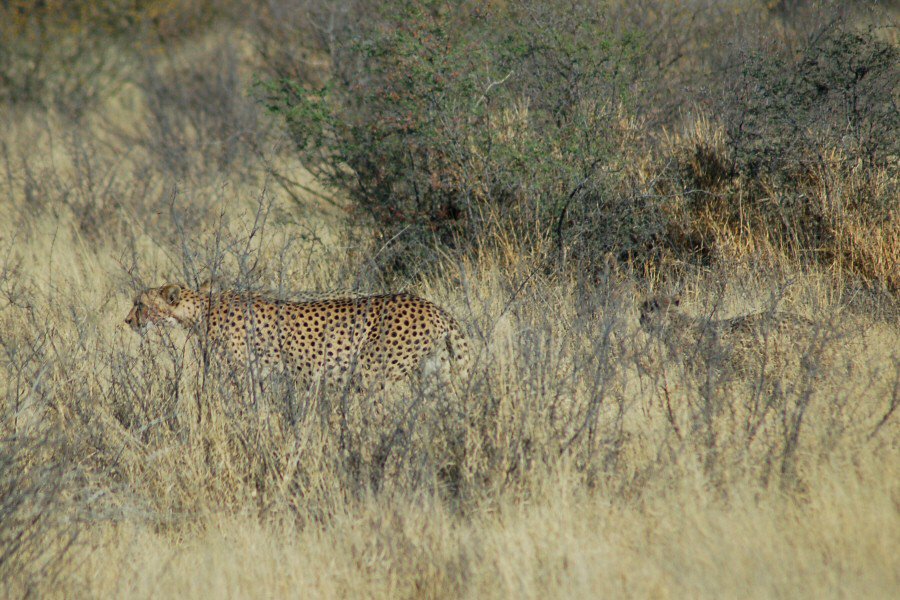 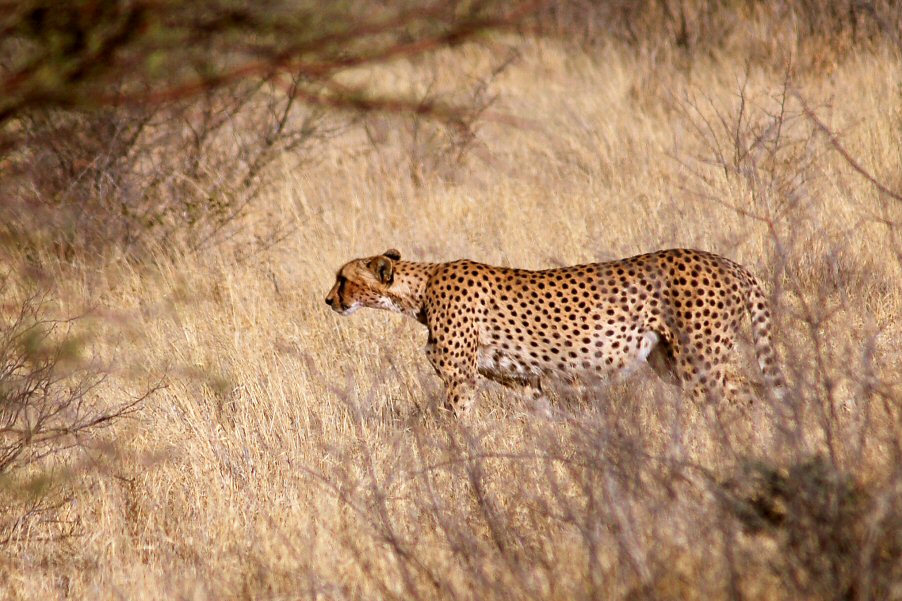 Soon after the excitement of the cheetahs, we see a gemsbok (oryx) and K’s father asks what their calves look like. Like magic, we come across a small herd that includes two calves – the first and only ones we will see. As we slow to observe them, they gallop gracefully, parallel to the road, with the calves staying close to their mothers’ flanks. Once they determine we are harmless, they return to grazing, but keep a wary eye on us.

The lovely gemsbok is well adapted to the harsh climate of the Kalahari, with a low metabolism that allows them to survive much of the year without water. Like the kudu, they get much of the moisture they need from their food. They are also strikingly beautiful.

Almost before we are out of sight of the gemsbok, Kaiser again announces that he sees a cheetah. We closely scan the grassland around us. My husband has his binoculars handy (I usually have a camera in my hand instead) and directs my attention to something dark sticking above the grass in the middle distance. Heads. Another family of five, this time keeping watch from the shade of a tree.

Kaiser moves a little farther down the road and, with careful maneuvering, gets us within 15 or 20 feet. The mother and one cub watch us intently, while the others lounge in the grass. 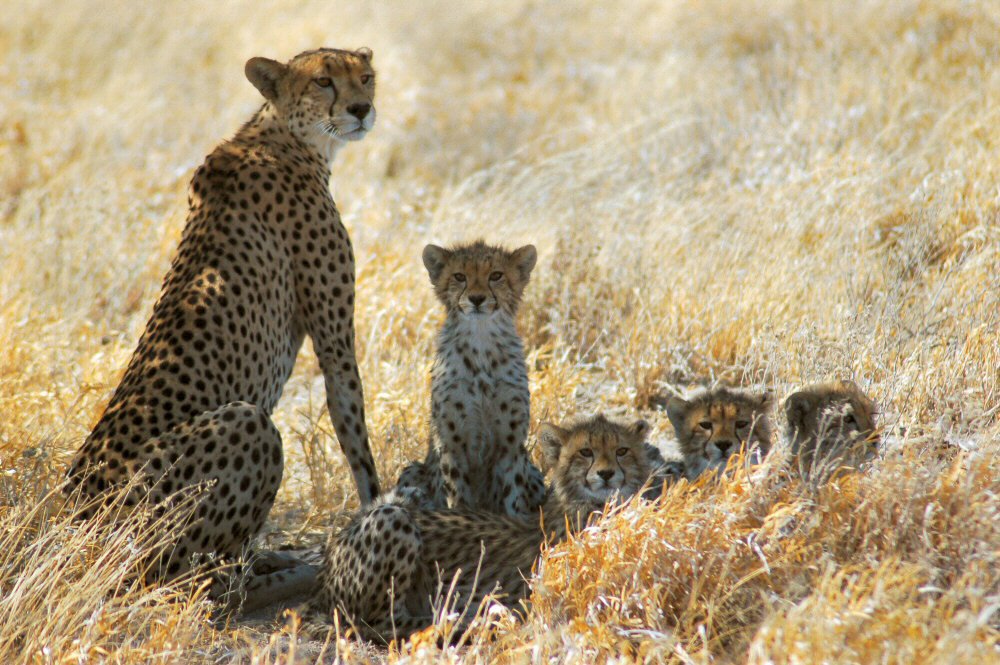 They watch us watch them for what seems like a long time before the mother heads off through the grass. Soon the cubs follow.

Seeing these amazing and beautiful creatures so closely is exhilarating.

In our case this is enhanced by the fact that there is absolutely no one else around. As we drive on, looping back toward the waterhole where we finally meet another vehicle, I think how incredible it is to be the so alone here. I’ve sometimes felt guilty to be wealthy enough to have the privilege of coming here just to see all these magnificent creatures in their “home” and feeling that it is wrong to disrupt them. Now those concerns are completely subsumed by awe and joy. It is such a delight to be here.

We head next to Deception Pan. From the name alone I know to expect a mirage, but the illusion is so strong I am still surprised to find the pan filled, not with precious water, but with puckered, deeply cracked, dry black soil. K’s father wants to know what minerals are in this strange dirt. Kaiser doesn’t know, so K’s father tastes it. Salt. Lots of salt. 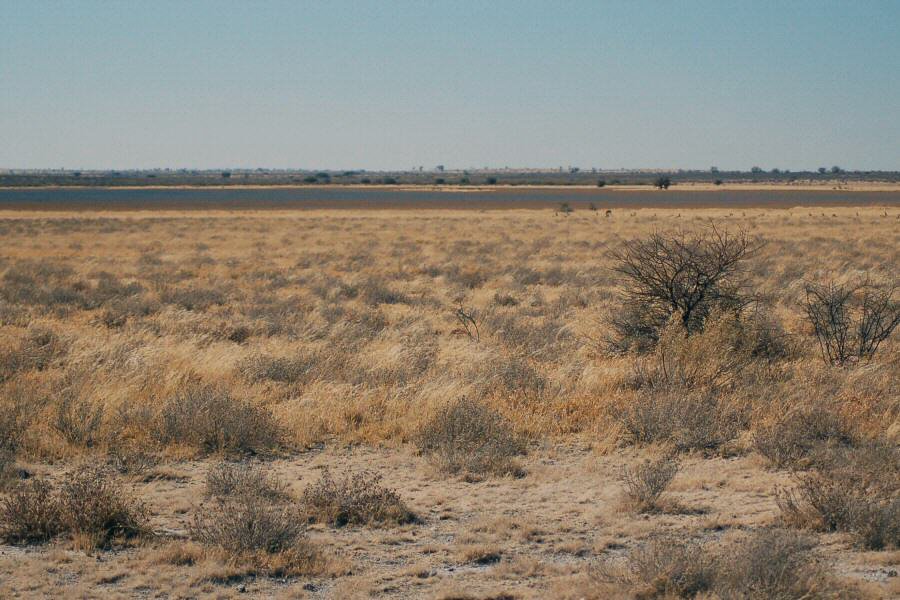 After the rains, when this pan is wet and lush, this is THE place to see wildlife in the Kalahari. But we are here in the dry season, and springbok, ostriches, and helmeted guinea fowl are the only inhabitants visible this morning. 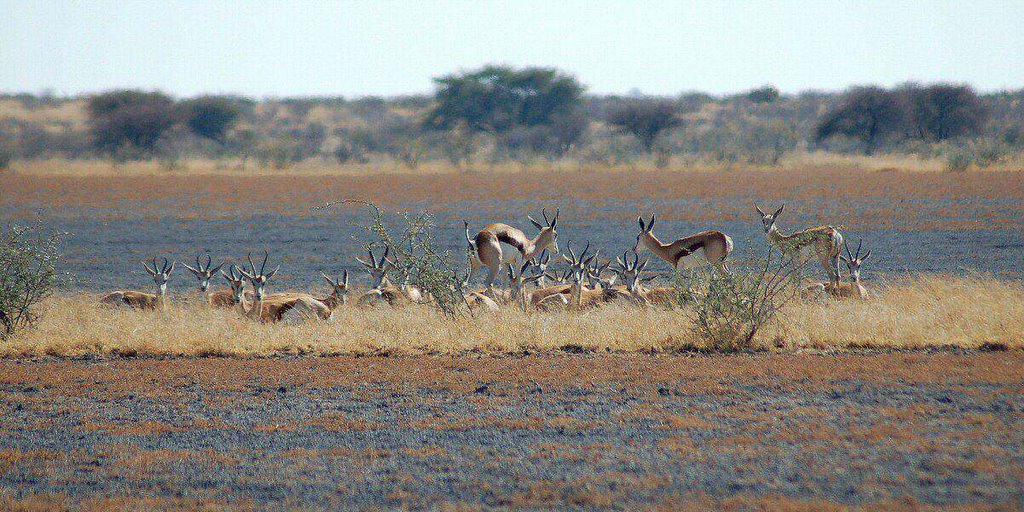 We circle the pan and enjoy its fabulous scenery. Along the way Kaiser shows us the skeleton of a giraffe bleaching in thesun where it fell and died – it’s bones still together in the spot where it fell.

We also find a “perfect” free-standing termite mound and we stop to photograph it and each other. Termite mounds are ubiquitous in this part of Africa, with the largest usually standing beside and engulfing trees that lend them support and protection from the wind. These mounds serve as the ventilation system for a series of subterranean tunnels and chambers and allow temperatures within to remain at a steady 29-31C and 100% humidity. A single mound such as this may be home to between one and three million termites.

I think we head back by way of Sunday Pan. 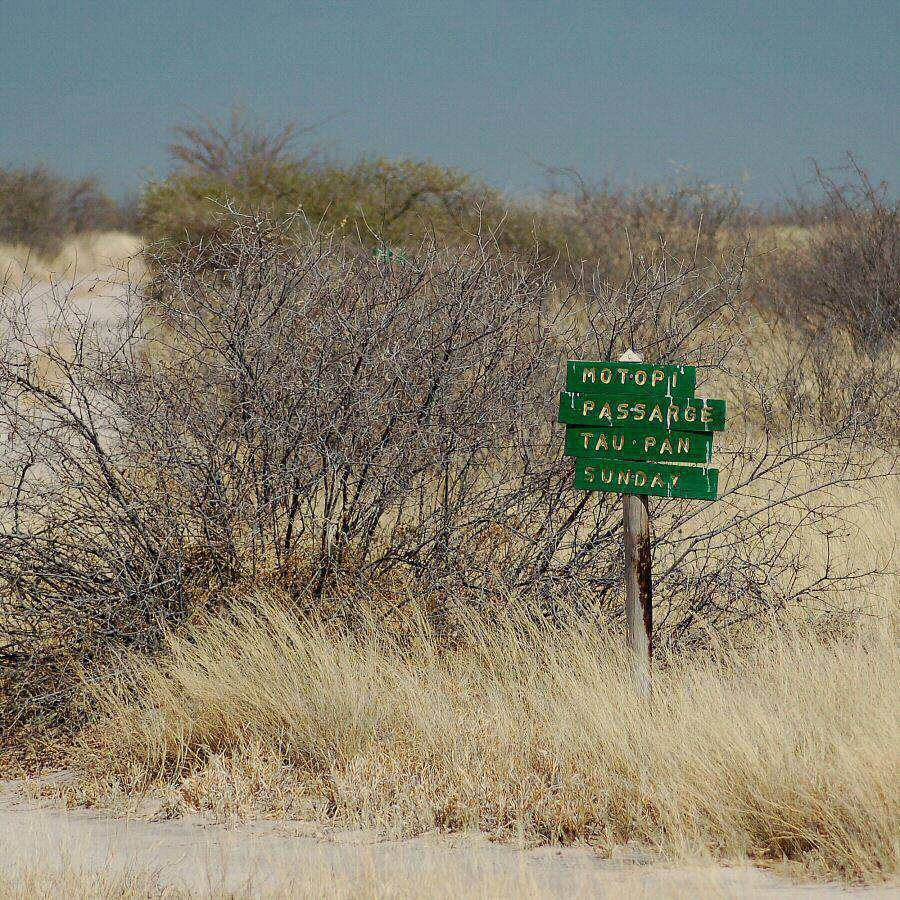 As we drive, Kaiser leans over the side of the truck, watching the ground. He spots giraffe tracks in the road, and follows them for many miles without seeing any other sign of the giraffe that left them.

However, we do see a colony of meerkats (the suricate mongoose), which entertain us for some time.

We also see a small herd of red hartebeest. They leave the shade where they have been grazing and vanish into the brush even before our vehicle comes to a stop on the road a quarter mile or so away. They are beautiful. We snap a few photos as we watch them vanish, laughing. It is fitting that all we capture is a view of their rumps as they flee – after all, this really is the view we have of most of the wildlife we see. It is far more realistic than our perfectly posed cheetah pictures.

Back at camp, we again while away the heat of the afternoon reading, writing, playing, cards, or snoozing in our tent.

The evening game drive is a little anti-climatic after the morning’s excitement.

It is a good afternoon for birds, however, particularly kori bustards. These are the heaviest flying birds and we often see them on our game drives as they strut across open areas. M has very much wanted a picture of one in flight. Today one cooperates. 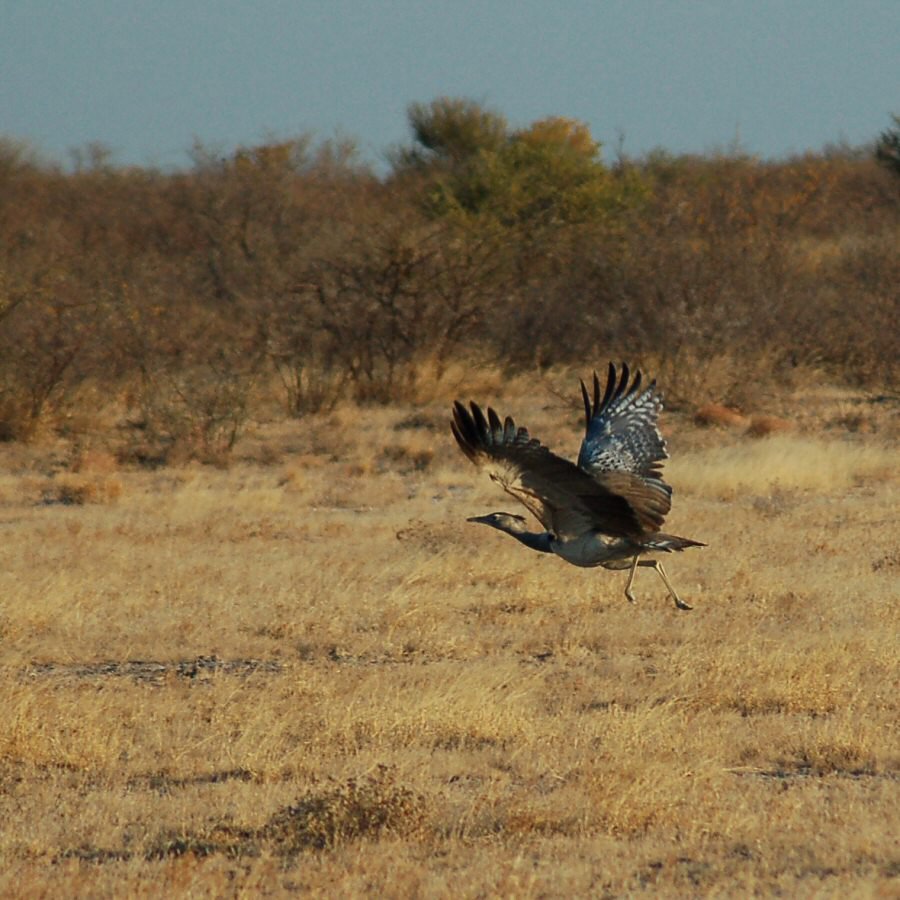 I also finally get a photo I have been particularly seeking: A pronking springbok.

These small antelope break into a series of stiff-legged leaps high into the air (called pronking) when fleeing a predator, however, young springbok will apparently engage in pronking simply for fun. We have seen a number of them do just this, but I have been unable to capture it on film – until now. 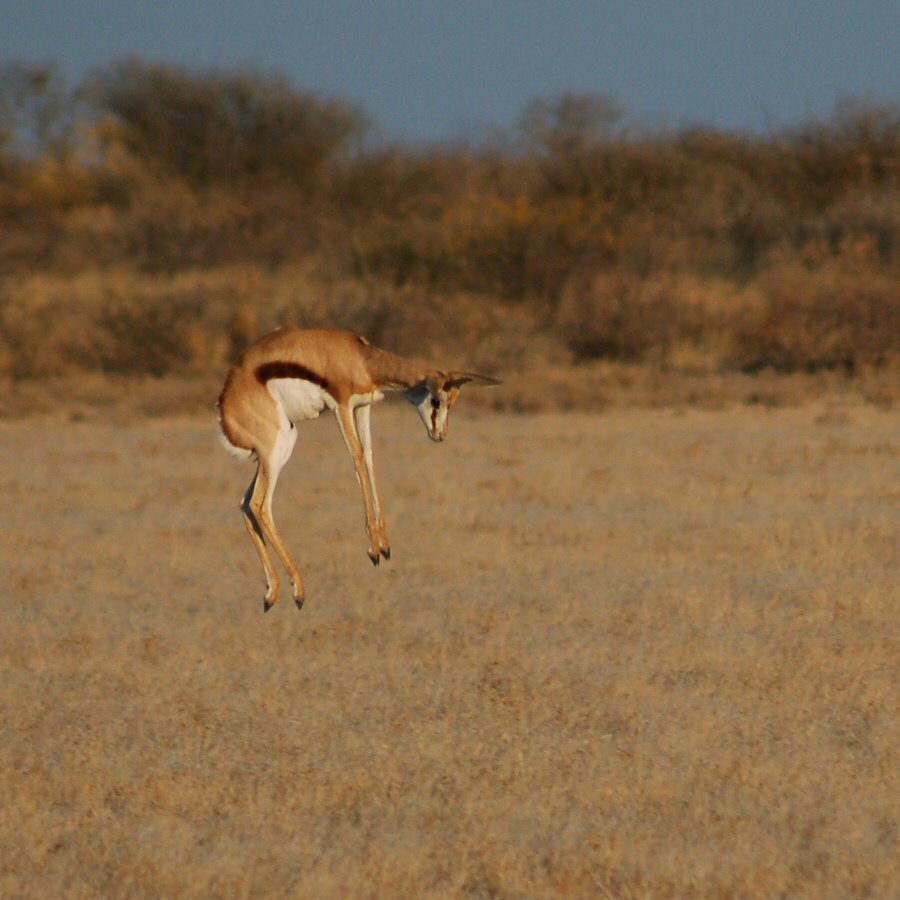 The springbok are followed by a secretary bird. These large birds look a bit like a cross between an eagle and some type of crane. Earlier in the day we had spotted a pair of them and now we get to see one break into flight after a very long sprint across the sand. 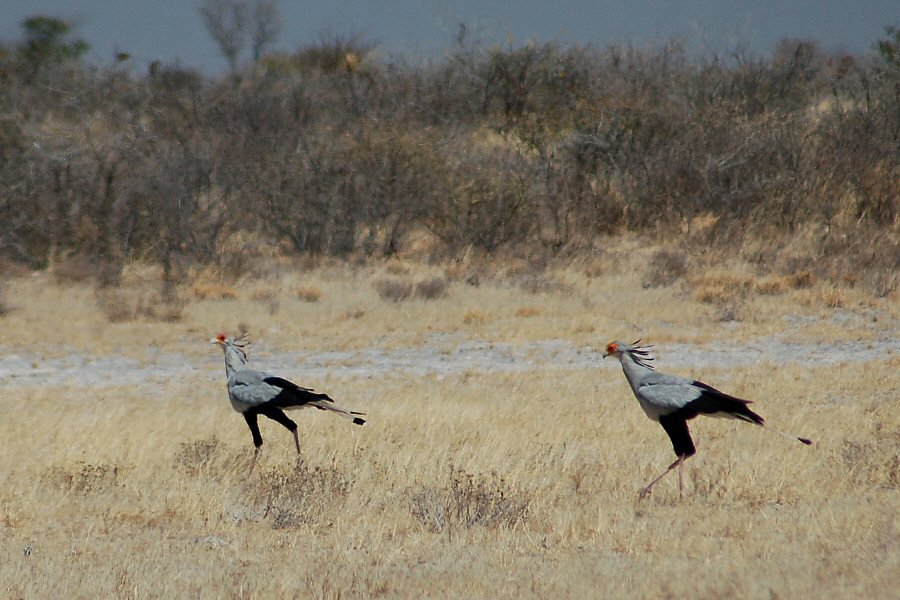 We take a round of sunset pictures and then, as we hurry back in the dark, we again get glimpses of the Kalahari’s nocturnal life, including glittering eyes that probably belong to the wildcat we saw in the morning.

Back in camp I notice that the neighborhood jackals that kept watch so intently on our first night have moved on and – aside from what I assume to be barking geckos calling from the entrances of their burrows – the night is still and peaceful.

The moon is bright, making it hard to take in the full extent of the sky and the constellations that dance across it in an unfamiliar jumble.

Are you familiar with Rakuten, the online shopping app that gives you cash back when you make a purchase? Did you know you can use Rakuten for travel bookings? Well, you can! END_OF_DOCUMENT_TOKEN_TO_BE_REPLACED