We approach the ancient church of Aya Sofya (Hagia Sophia) – now a museum – from the grassy plaza that links it to the Blue Mosque. 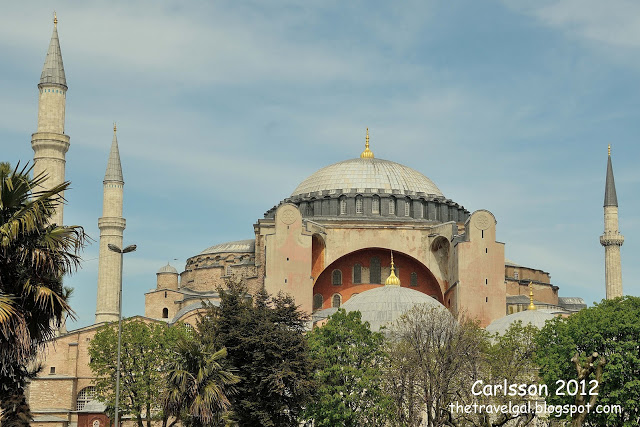 Inaugurated by the Emperor Justinian in 537, the “church of holy wisdom” was the largest cathedral in the world for nearly 1000 years until its conversion to a mosque in 1453. Today it is a bit hard to discern what the Byzantine structure looked like, as various additions over time (including massive buttresses added to support the huge dome) have obscured its original form. None-the-less, it is an impressive sight.

Even after being altered to serve as an Ottoman mosque, the interior space is easier to understand – the original form is barely impacted by the addition of a minbar, mihrab, the sultan’s loge, and other features commonly found in a mosque. It is still feels like a Christian church. 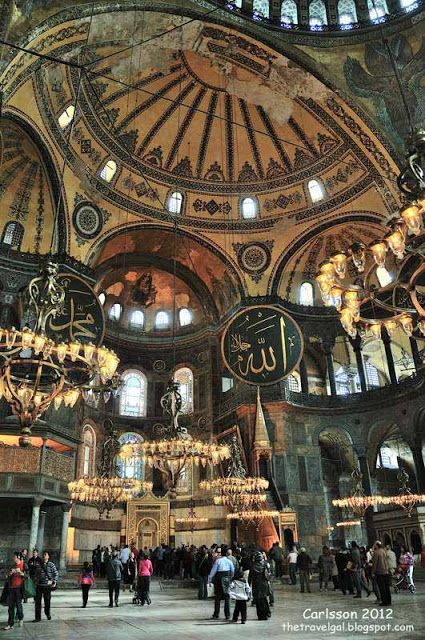 It is a gorgeous, dramatic space.

Unfortunately we are here on a day when a government minister is using it as the location for a press conference. Since large swaths of the floor occupied by the event, we head upstairs to the gallery to get a better view.

And what a view it is!

The galleries also provide a good spot for examining the church’s details, including the few intricate mosaics to have survived the centuries.

It’s hard to imagine what this place was like 1000 years ago, when every surface was decorated and the whole building would have glittered with gold.

Of course, it’s still possible to see some of the icons and golden treasures that once filled this church. Just head to Saint Mark’s Basilica in Venice where they were taken after the church was attacked and plundered by Crusaders in 1204!

At least there was little they could do to destroy the overall ambiance of this glorious place.