Late morning arrival in Chiang Mai, Thailand’s second largest city often called “Rose of the North” for the abundance of flowers that thrive in its cooler mountain climate. Meet your Tour Director who will assist you through customs formalities and escort you to your centrally-located hotel, within walking distance to Chiang Mai’s famous night market.

Our “Tour Director” is Chris. She seems sweet and friendly, if easily flustered.

Chiang Mai, the “new city,” was established as a capital over 700 years ago. With a population of 250,000, it is a fairly large city, but its abundant gardens make it seem like a friendly place – not that I don’t still feel a little overwhelmed by its foreignness. A feeling that is compounded by the strange fact that the city’s old town is encircled by a moat with a brick wall and gates that look natural in any old European city. But instead of the blocky buildings and massive cathedrals of so many walled European cities, here steeply angled red rooftops and gilt spires poke above the stolid bricks. It is disorienting. Where am I anyhow?

Our hotel, the Amora Tapae Hotel Chiang Mai, is a tall modern box, but it is conveniently located directly across the moat from the old town area. 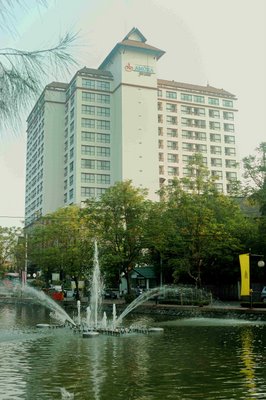 While our windows do not overlook the old town area, we do have a view that includes several sparkling temples.

Soon Chris has gathered us together for a city tour.

Our first stop is Wat Chiang Man, which is the oldest wat in the city (although none of the structures we actually visit are themselves particularly old). 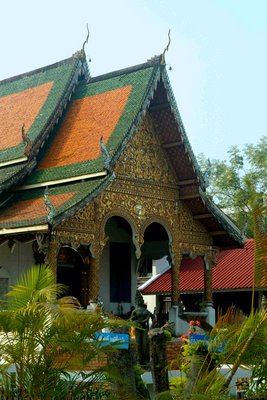 It is a beautiful place and I have a hard time concentrating on Chris’ introduction to it – I’m too delighted by the sparkling gold details,

There is only a small parking area between us and the highway, but that busy world seems far away.

We leave our shoes outside on the steps and enter one of the structures – I think it is a wihan (an assembly hall), rather than the bot (which is not always open to the public and supposed to be off-limits to women).

Inside, the unfinished inside of the roof rises high above us, making this feels like a very old building. It is dimly lit, glowing red and gold where the main Buddhas sit. Gold bars protect precious small figures.

As my eyes adjust to the light, other details draw my eye. The walls are painted a dark color that serves as the background for lively illustrations. They either depict scenes from the life of Buddha or from the Ramakien – which it is never really registers in my mind. I even ask, but the answer vanishes as soon as I have heard it.

Here though the walls, doors, and shutters are a vivid red with golden stencils.

As Chris herds everyone back to the bus, Lane and I slip around the side of the temple, first attracted by a pair of glittering nagas and then by a large golden chedi set atop a herd of elephants.

I need more time so I can see everything!