The Memphis Blues Hall of Fame celebrates, preserves, and supports blues music. In the Hall of Fame’s Blues Museum, visitors are introduced to some of the most significant people and moments in blues history. 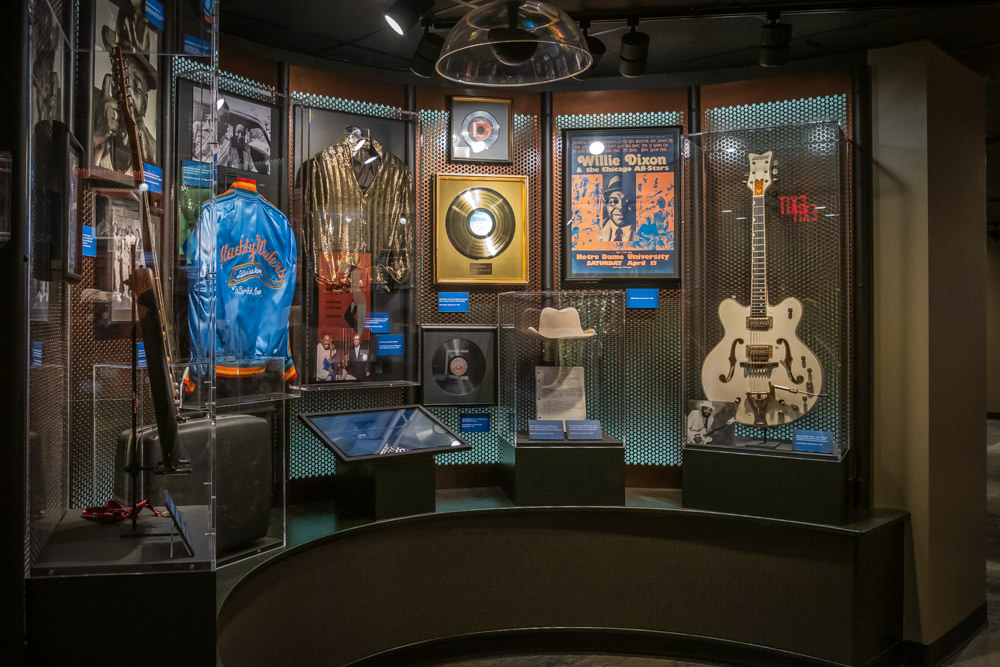 I visited the Blues Hall of Fame Museum as a guest of Memphis Tourism. I appreciate the opportunity to visit some of the many attractions in Memphis, however, all information and opinions here are my own and do not necessarily represent those of my hosts.

The Blues Hall of Fame celebrates the best of the blues

The blues developed deep in the southern USA, particularly in rural areas of the Mississippi Delta. Here, African slave songs and chants, hymns, work songs, and country dance music melted together to form a new type of uniquely American music. Over time this music followed former slaves and sharecroppers as they migrated north seeking work. Today this distinctive music can be heard in many places, even far beyond the borders of the USA.

Based in Memphis, Tennessee, the Blues Foundation works with a network of local blues organizations to preserve the blues heritage and support blues musicians, producers, scholars, and fans

“Our mission is to preserve blues heritage, celebrate blues recording and performance, expand worldwide awareness of the blues, and ensure the future of the uniquely American art form”

As part of their mission, Blues Foundation created a Blues Hall Fame to recognize significant contributions to the blues through performances, documentation, and recording. In 2015, the Foundation opened a museum to celebrate and educate the public about Hall of Fame inductees.

The Blues Foundation Hall of Fame

Each year new members are added to the Blues Hall of Fame based on their “historical contribution, impact, and overall influence on the blues.” It’s a list of the best of the best in the world of the blues.

To date, the Foundation has recognized more than 400 people, recordings, and publications. Performers make up 130 of those honorees.

Blues Hall of Fame honorees are recognized in  five categories:

If you are interested in the learning more about the blues, the Blues Hall of Fame’s Awards page is a great place to start.

The Blues Museum introduces visitors to the best of the blues

The Blues Museum at the Blues Hall of Fame in Memphis features memorabilia and recordings linked to the Hall of Fame’s broad range of inductees.

It has three parts: The Hall of Fame exhibits, a listening area, and a temporary exhibit space.

Because the Blues Hall of Fame Museum is basically across the street from the Civil Rights Museum, we visited both in the same day. We left the Blues Museum for last, thinking it would be a pleasant way to end the day. As it turned out, we were so exhausted from hours in the Civil Rights Museum that we didn’t really give the Blues Museum the time it deserved. While I felt like the museum wasn’t as informative as it could be, I also know I didn’t take advantage of all the material available to me.

Exhibits in the Blues Hall of Fame

After visiting several other large music museums in Memphis, the exhibit area at the Blues Hall of Fame Museum seems relatively small. The main exhibit area has a series of alcoves with big glass display cases. Each case contains a variety of memorabilia, musical instruments, and a sound station that plays music. Apparently, each case has a unifying theme, but I often wasn’t sure what the theme was supposed to be. I’m not sure whether that’s because the theme really wasn’t very clear or because I was tired and not tracking well as I went through the exhibit area.

But it was interesting to drift through, even if I wasn’t always sure how the items on display related to each other. The museum’s collection has a fascinating mix of personal items, musical instruments, promotional materials, photographs, recordings, and more. 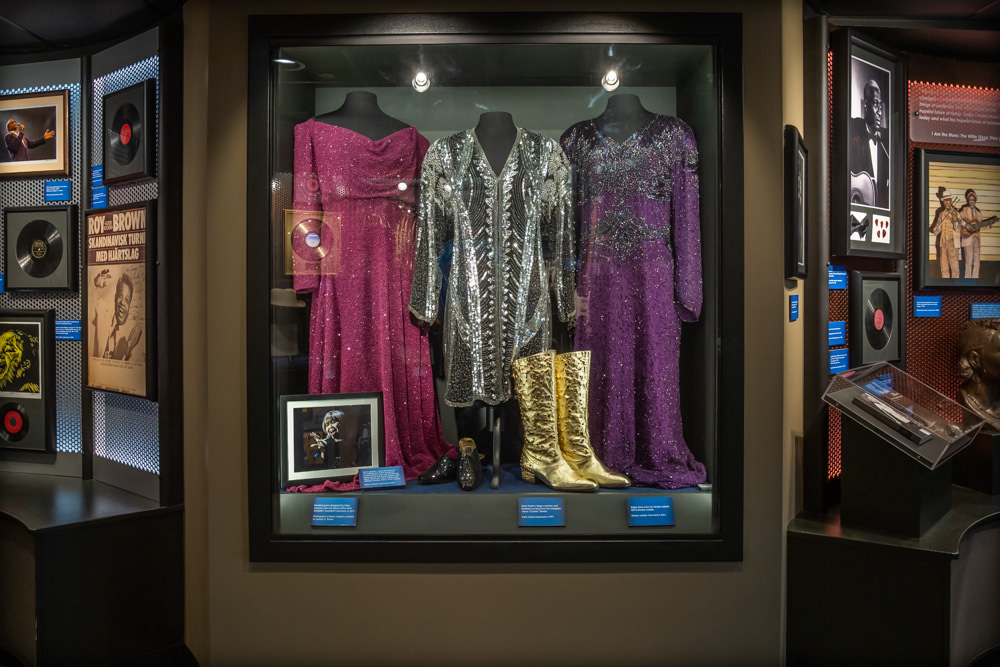 While the connection between items on display wasn’t always very clear to me, the music associated with each provided an easy entry into the story.

For example, one of the exhibits included a video of Sister Rosseta Tharpe fronting a gospel choir.

Unfamiliar with Tharpe, I was blown away by the way she rocked an electric guitar. The video drew me in to learn more about her and the impact she and other women had on the blues.

While the Blues Hall of Fame Museum offers the opportunity to listen to music throughout the exhibit area, the far end of the museum features a listening theater and two private listening rooms.

Visitors can call up musical selections by Hall of Fame inductees. There are a variety of search options available, but we just pulled up the list of artists and made our selections from there. The platform provides information on each artist and a selection of songs available, like The Thrill is Gone by B. B. King.

These private listening rooms allow visitors to enjoy the music without distracting sounds from other visitors, the theater, or the recordings in the exhibit area.

A separate area near the building entrance is used for special exhibits. Unfortunately, I visited while the museum was still installing its latest exhibit.

That new exhibit features photographs taken deep in the heart of blues country by French photographer Sylvie Bosc. The portion we saw included evocative images of the landscape and small towns in which the blues evolved.

The Foundation’s website isn’t specific, but it appears this exhibit will be on display through August.

Plan your visit to the Blues Hall of Fame Museum

The Blues Hall of Fame Museum encompasses a wide range of blues styles and influences. However, it still has a relatively small collection. I say “still” because this is a fairly new museum, so I expect their collection – and exhibit area – will grow over time.

Despite its size, the museum offers an interesting array of exhibits and recordings. It’s a collection that any serious blues fan will want to visit.

It’s also a good spot for visitors who aren’t familiar with the blues to get a feel for the music and its range. However, I thought the relative lack of narrative in the exhibit made it challenging to see how the pieces fit together. Visitors intent on learning the history of blues and its role in American music, may be disappointed.

Both the Rock n Soul Museum and the Stax Museum of American Soul Music do a better job of explaining how the blues developed and its influence on other forms of music. But of course, blues is only a small piece of the musical story told by these two large museums. The Blues Hall of Fame has more objects and more recorded blues music available than either of the larger museums.

Getting to the Blues Hall of Fame

The Blues Hall of Fame Museum is located in the same building as the Blues Foundation. You’ll find it right on Main Street, about six blocks south of Beale Street and directly across from the Civil Rights Museum.

For those who don’t care to walk, the Main Street trolley stop is practically in front of the building.

Visitors driving to the National Civil Rights Museum should be able to leave their car in the parking lot and walk up the street to the Blues Museum.

The Blues Hall of Fame Museum is open daily. Check the museum website for hours and current admission charges. (Regular adult admission in April 2019 was $10.)

Inside the Blues Museum

Visitors to the museum are greeted by a friendly and knowledgeable volunteer. They provide a little orientation to the museum and can answer questions.

Most museum exhibits are located in a relatively open area on the building’s lower level. Because the exhibits are aligned along a fairly wide space, it’s easy to move around among the display cases to avoid other visitors. However, the museum isn’t using a headphone system, so spillover noise from other displays or nearby conversations can make it difficult to hear the recorded music available at each display.

Visitors who really want to listen to the music should try to get one of the two private listening rooms. While not totally sound-proof, they greatly reduce distracting external sounds. Each room can comfortably hold two adults, but that’s about all.

Note that there is a separate exhibit area hidden behind the main displays on the left. This area has items related to the current year’s Hall of Fame inductees. I think visitors are expected to exit through this hall, but it’s easy to miss.

The temporary exhibits are in an open area by the building entrance. It’s directly across from the gift shop and the first thing you’re likely to notice when you enter.

The museum has a gift shop offering a variety of merchandise and a few recordings.

Among other activities, the Blues Foundation sponsors two major events in Memphis each year: The International Blues Challenge and the Blues Hall of Fame Induction Ceremony.

Each winter the Blues Foundation holds an International Blues Challenge.

This challenge begins at regional competitions around the USA and the world. The winners of these regional challenges then come to Memphis to compete against each other in the clubs and halls along Beale Street. This multi-day event is open to the public and offers an opportunity to hear some of the world’s best undiscovered blues artists.

The next International Blues Challenge will be held January 28-February 1, 2020.

Each spring the Blues Foundation hold the Blues Music Awards. This multi-day event occurs includes the award ceremony with performances by award nominees, the induction of new members into Blues Hall of Fame, and other events. 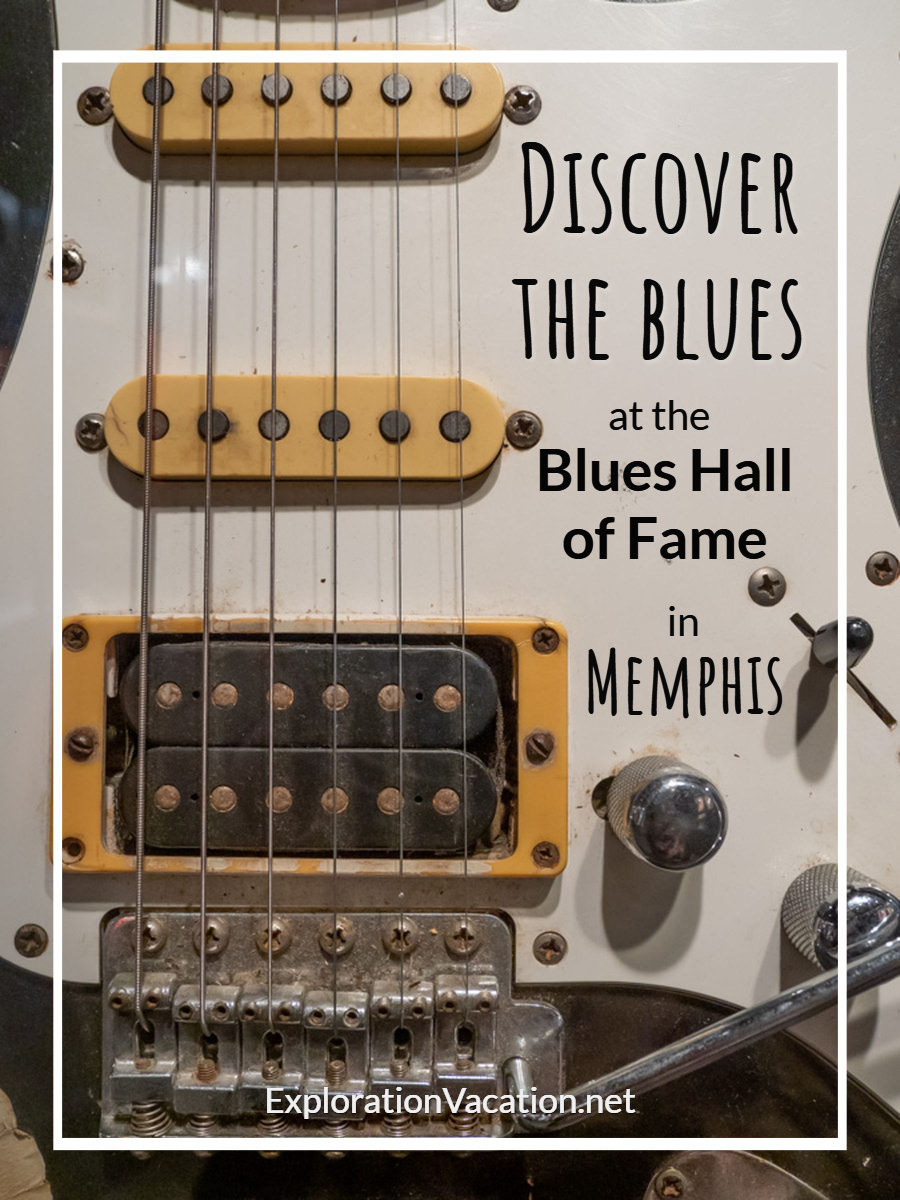 A special thanks to Memphis Tourism for sponsoring my visit to the Blues Hall of Fame Museum. 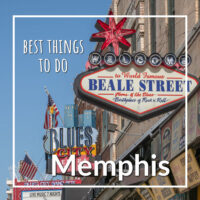