Time is a shapeshifter at Mission San Juan Bautista.

This is a place where the past slips into the present, where both the church building and the religious life conducted within it have continued largely uninterrupted since the mission’s founding in 1797. Unlike most of the missions, the church at San Juan Bautista was never abandoned and the heart of the church remained largely intact through generations of use. That continuity results in an interesting blend of past and present. 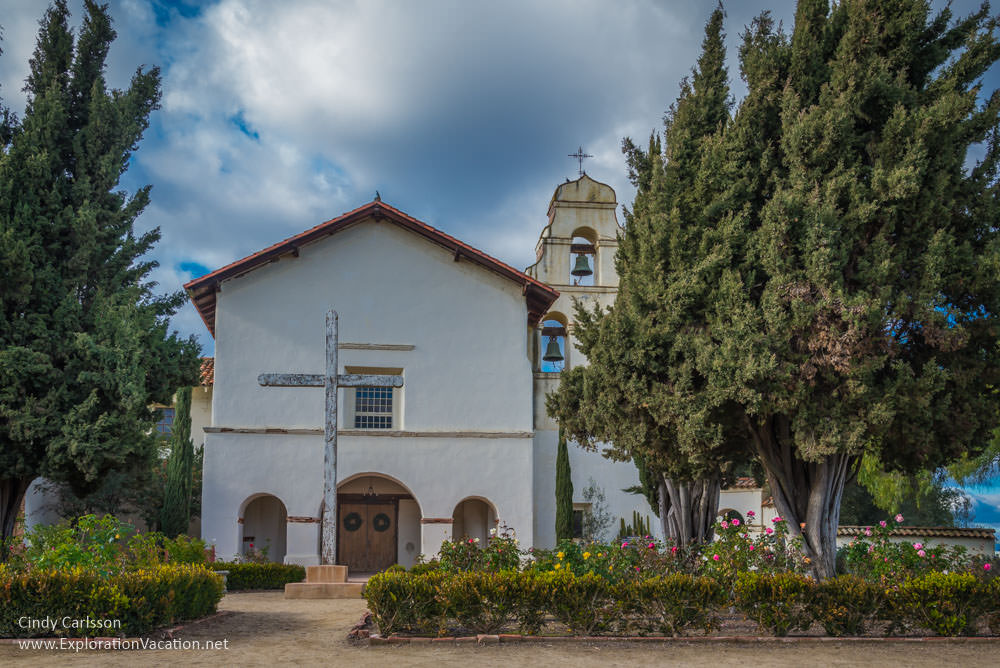 Exploring past and present at Mission San Juan Bautista

Arriving at Mission San Juan Bautista, most modern visitors see what appears to be a typical California mission church. However, time travelers from 200 years ago would be surprised by the bell tower (campanario) since the church was designed and built without one. (They would, perhaps, be even more surprised to discover that this is the third time the church was modified just to create a space for the bells that originally hung outside on a simple stand.) 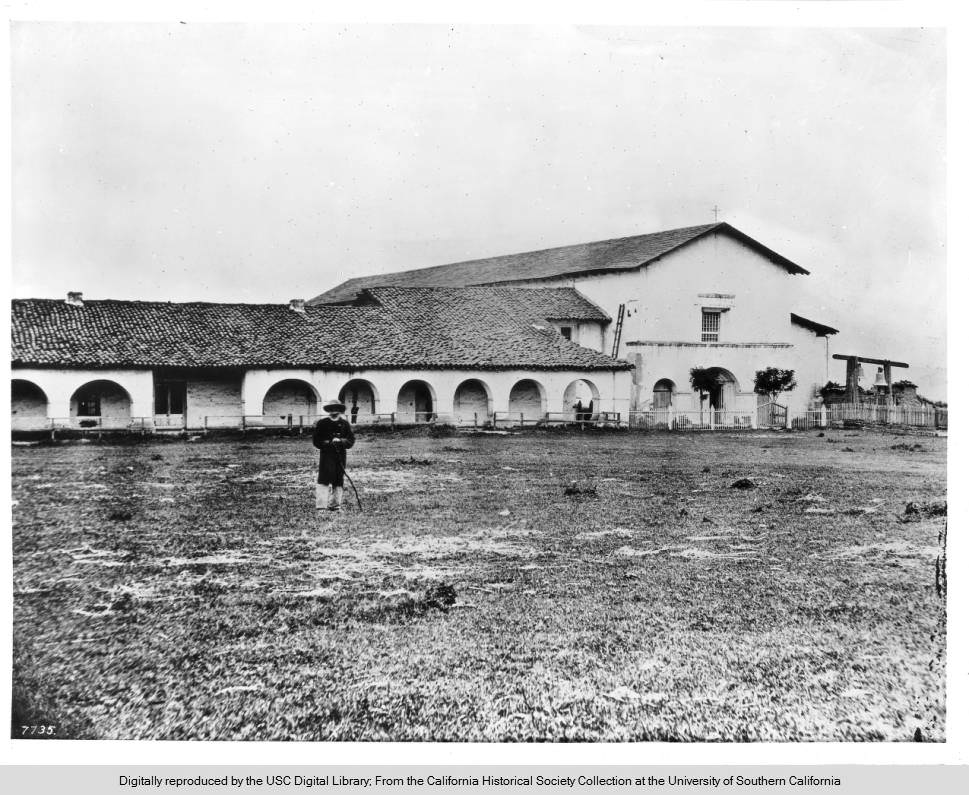 It’s harder to guess what our time travelers would think once they entered the church.

Following the 1976 restoration that added that campanario, the interior of San Juan Bautista today must look very much as the padres imagined it would when they laid the cornerstone in 1803. 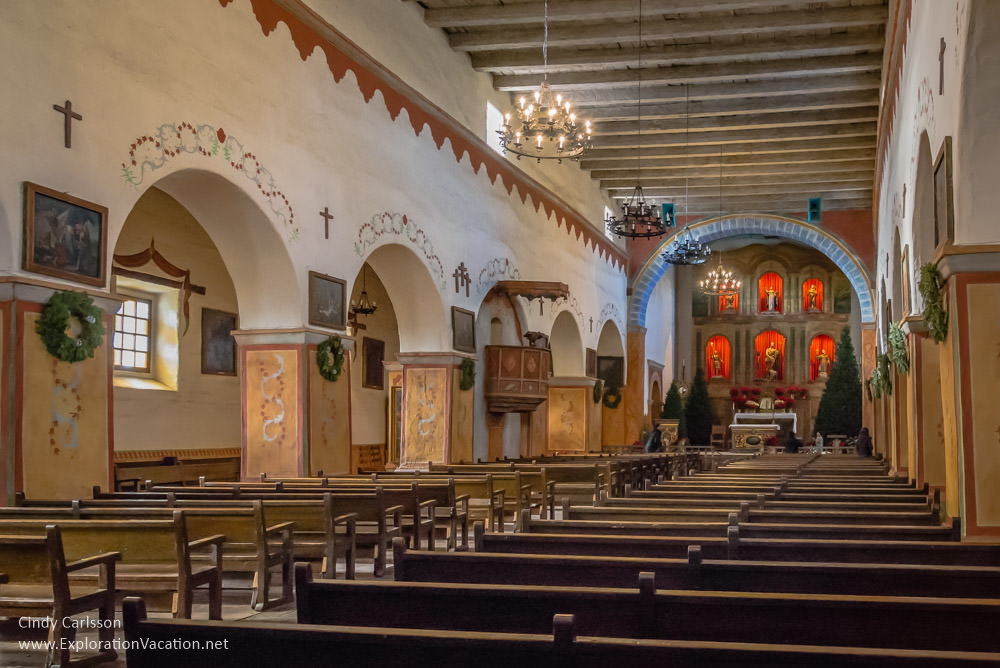 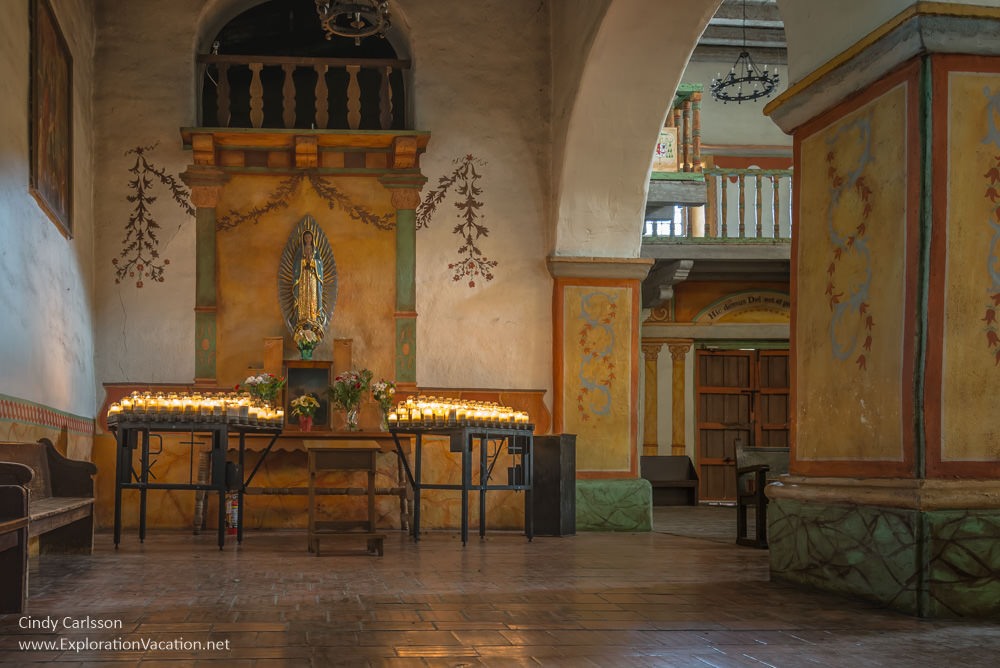 I think they would be delighted.

Structurally this is exactly the space they envisioned. With three naves separated by arches, it was the largest California mission church.

But it’s unclear whether those padres ever actually got to lead worship in this wonderful space.

A change in plans during construction

An earthquake during the church’s construction indicated that further reinforcing might be prudent. (The church sits almost directly above the San Andreas Fault, so earthquakes were a very valid concern.) At the same time, a rapidly shrinking population at the mission made the planned church much larger than needed.

The solution to both problems was to fill in the arches separating the naves, turning them into solid walls separating the central nave from the two smaller rooms along each side. It’s unclear when this change was made, but it seems likely it occurred while the church was still under construction. If so, the large, highly decorated church we see today is the church the padres imagined, not the one where they celebrated mass in 1812 and in the years to follow. 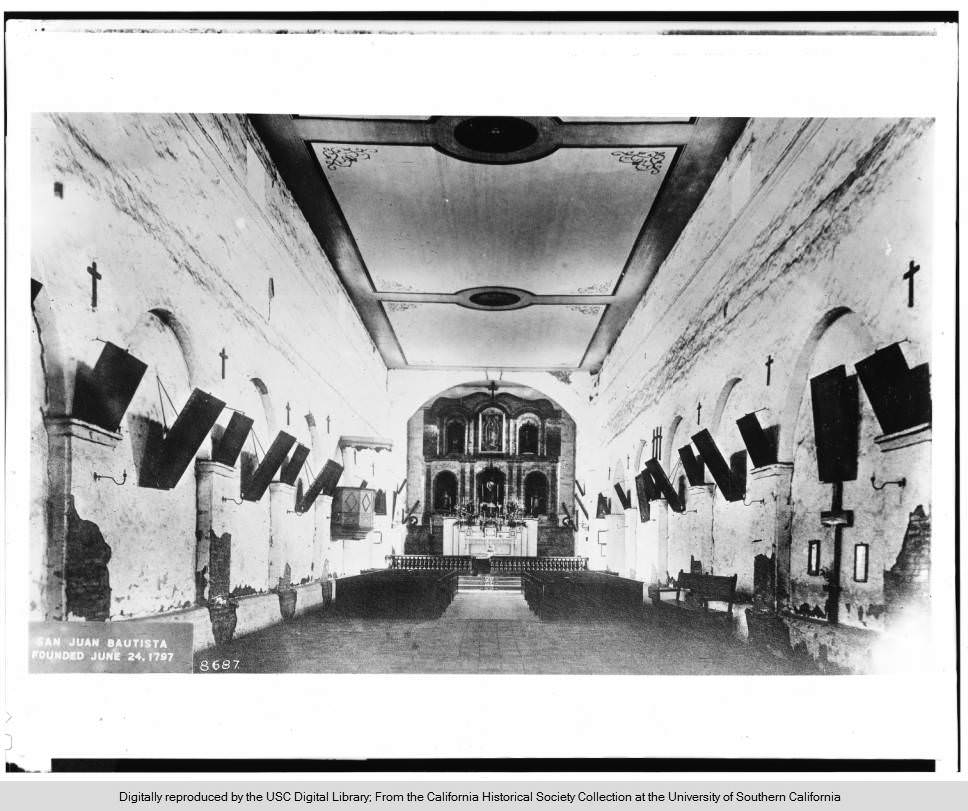 Interior of San Juan Bautista (ca. 1900) [public domain] via the University of Southern California Libraries and the California Historical Society

The exterior walls of the church collapsed in the 1906 San Francisco earthquake, leaving only the walls built into the arches around the central nave still standing. The collapsed exterior walls – and the two naves left open to the elements by their collapse – weren’t restored and the arches reopened until 1976.

On the other hand, the pulpit and many of the wall paintings in the central nave today would be very familiar to the padres who built this church, as they are the 1812 originals. The same is true of the altar and surrounding reredo, which were completed for the church around 1820 (well after the naves were separated) and have undergone little or no restoration. 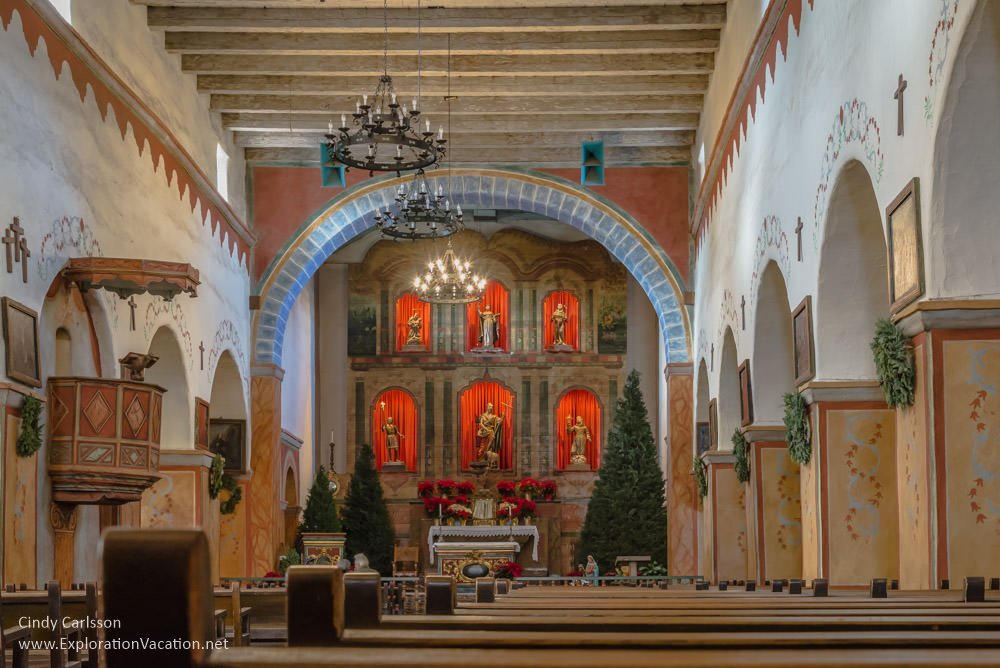 While the interior today is what the church founders envisioned, it probably never actually existed in this form (three naves, this pulpit, and the painted altar and reredos) until the 1976 restoration. In essence, the restoration built the church as it was originally designed, rather than restoring the church that was actually built.

If it is possible for a “restored” building to be more authentic than the original building, this might be the case at San Juan Bautista.

Restoration throughout the mission

Other spaces within the mission were also restored, including the Guadalupe Chapel. 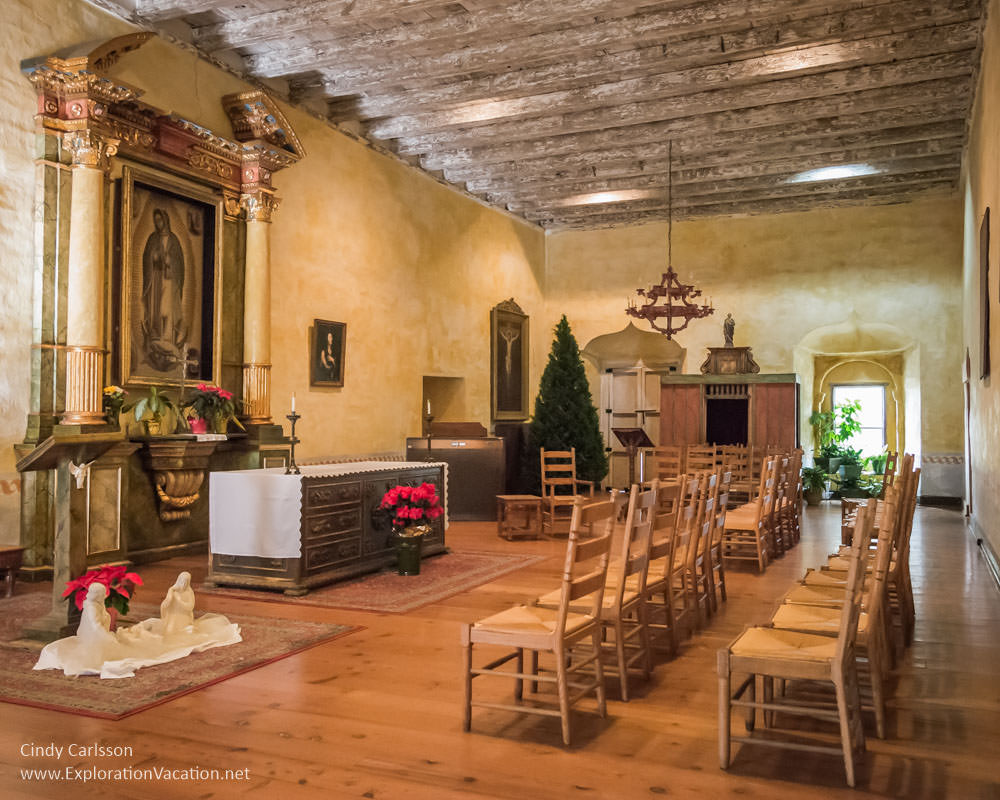 Even the cat doors are still visible. 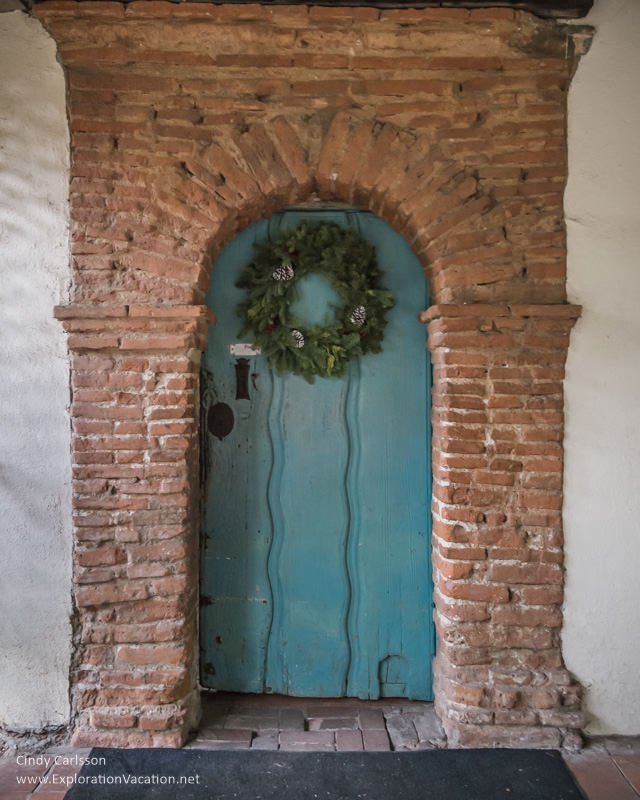 The padre’s quarters brought to life

The church was only one of the mission’s buildings. Like all of the Spanish missions, San Juan Bautista needed to be self-supporting in order to survive. That required housing, a kitchen, storage, workshops, and other working spaces.

Many of these functional spaces would have been built around the mission’s courtyard to enclose it. However, only one wing still remains. 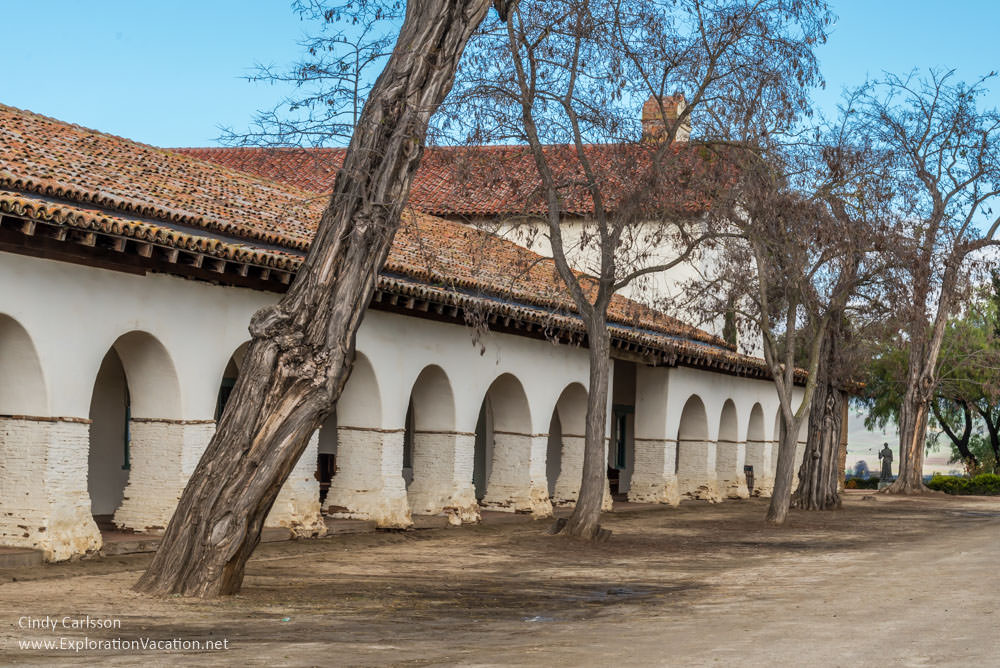 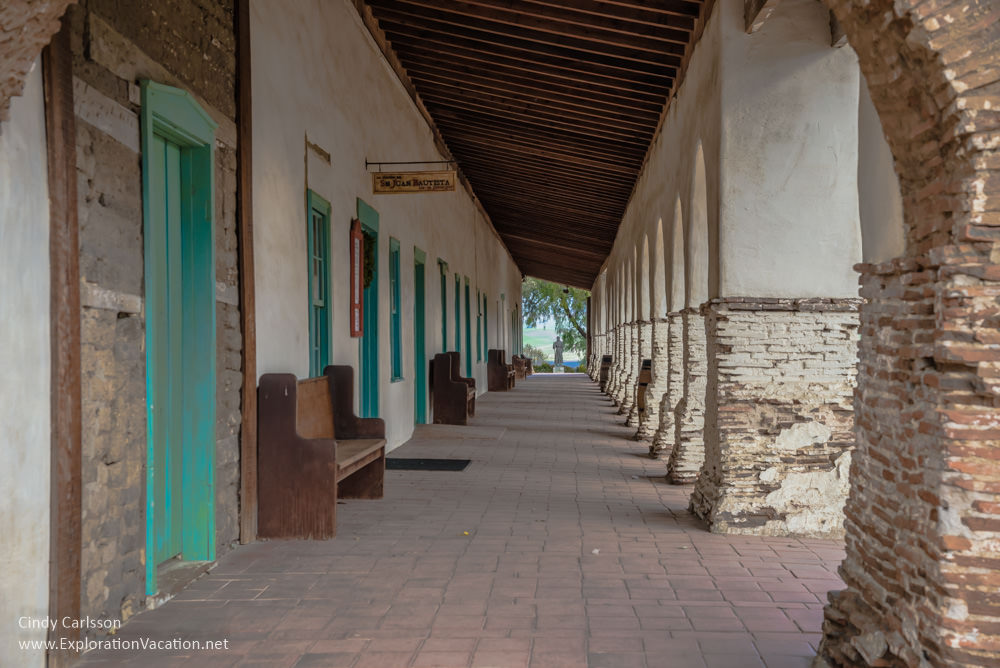 Inside, the padres’ quarters have been restored as part of the mission’s large and interesting museum. 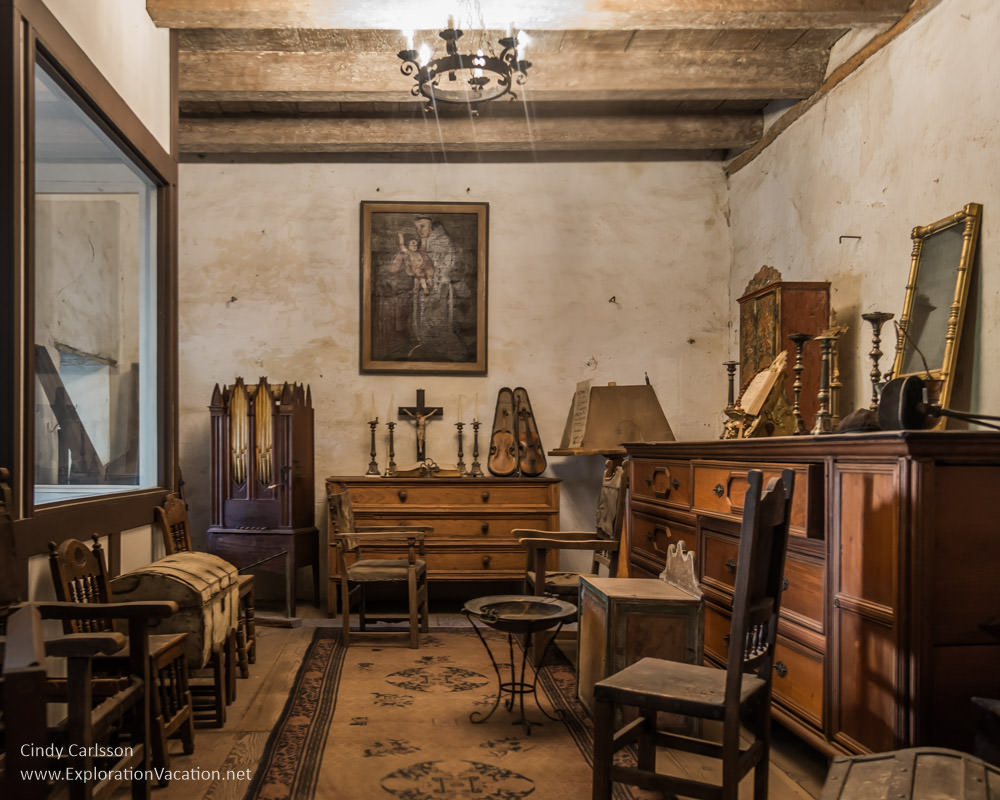 But this area doesn’t feel like a museum; I expect one of the old padres (perhaps Padre Esteban Tapis, who made the mission famous for its music) to walk in at any moment.

He doesn’t, but I’m sure he’s watching somewhere and is pleased to see the church restored to what it should have been all along.

The mission and town of San Juan Bautista are located just off Highway 101 an hour south of San Jose (or 1½ hours south of San Francisco) and a half-hour north of Salinas.

The town of San Juan Bautista includes about 30 historic buildings, several of which (the mission, Plaza Hotel, Zanetta House/Plaza Hall, Plaza Stables, Castro-Breen Adobe, a blacksmith shop, and the historic jail) are open to the public.

Mission San Juan Bautista is adjacent to the San Juan Bautista State Historic Park along the old town plaza. The mission church has remained in continuous use since its founding, with mass held several times throughout the week. Visitors should be quiet and respectful.

The church, museum, and gift shop are open regular hours most days.

Additional information on Mission San Juan Bautista can be found online at Mission Tour and the California Missions Resource Center.

San Juan Bautista State Historic Park preserves the area around what was once the town square of a thriving California town. Much of that part of town no longer exists, so the park has only a handful of buildings. It wasn’t always immediately clear to me what is or isn’t part of the park. Fortunately, there is no charge to visit the park unless you want to see the interior of the structures protected by the park. The park is generally open daily. Check the (not up to date) website for more information.

There is a good descriptive brochure available on the park website. The city of San Juan Bautista also has an informative website.

This would be an interesting place to spend the night (the historic district feels a little haunted), but lodging options within the town are pretty limited. However, there are a couple, so it is worth checking TripAdvisor and Airbnb (affiliate links) to see what is available in the area. 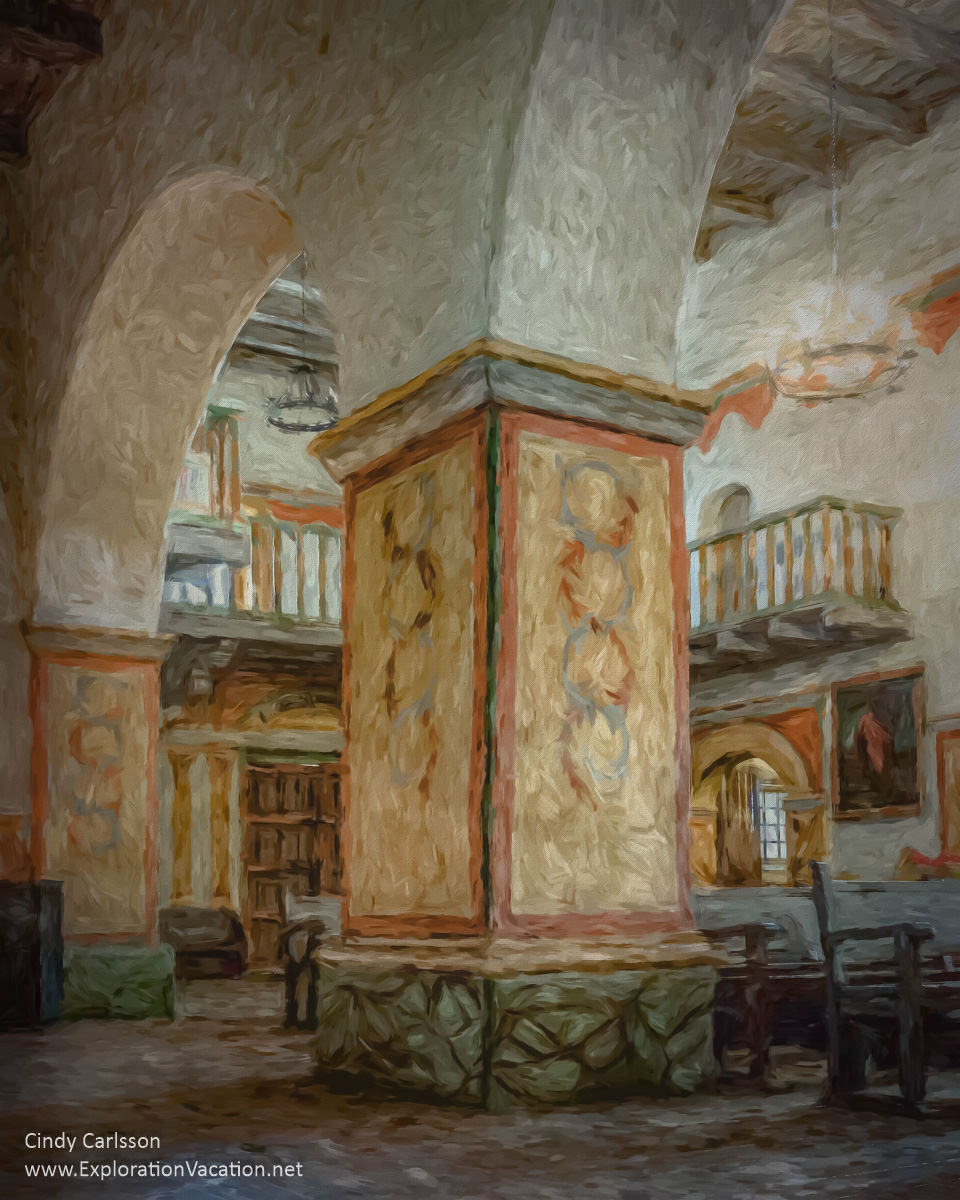 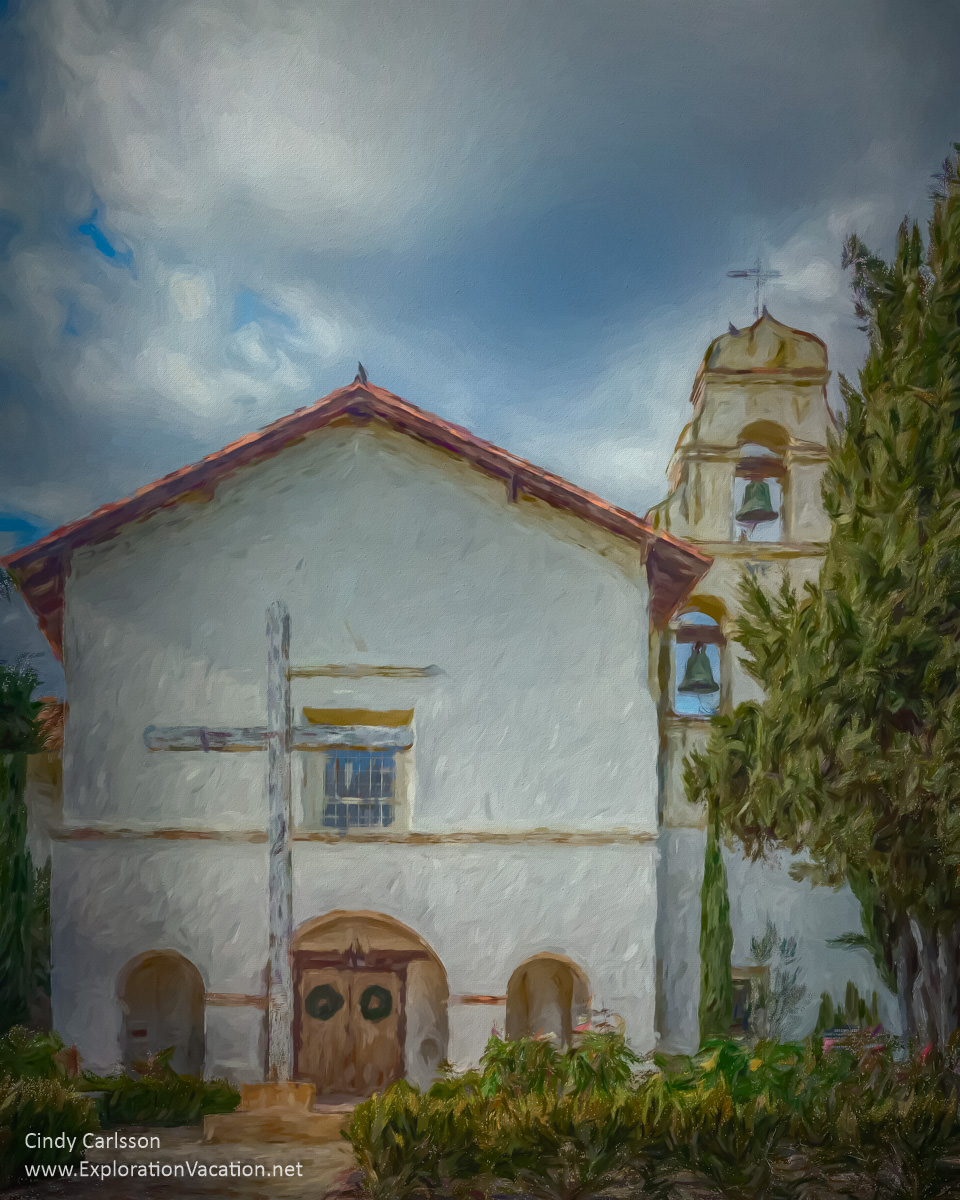 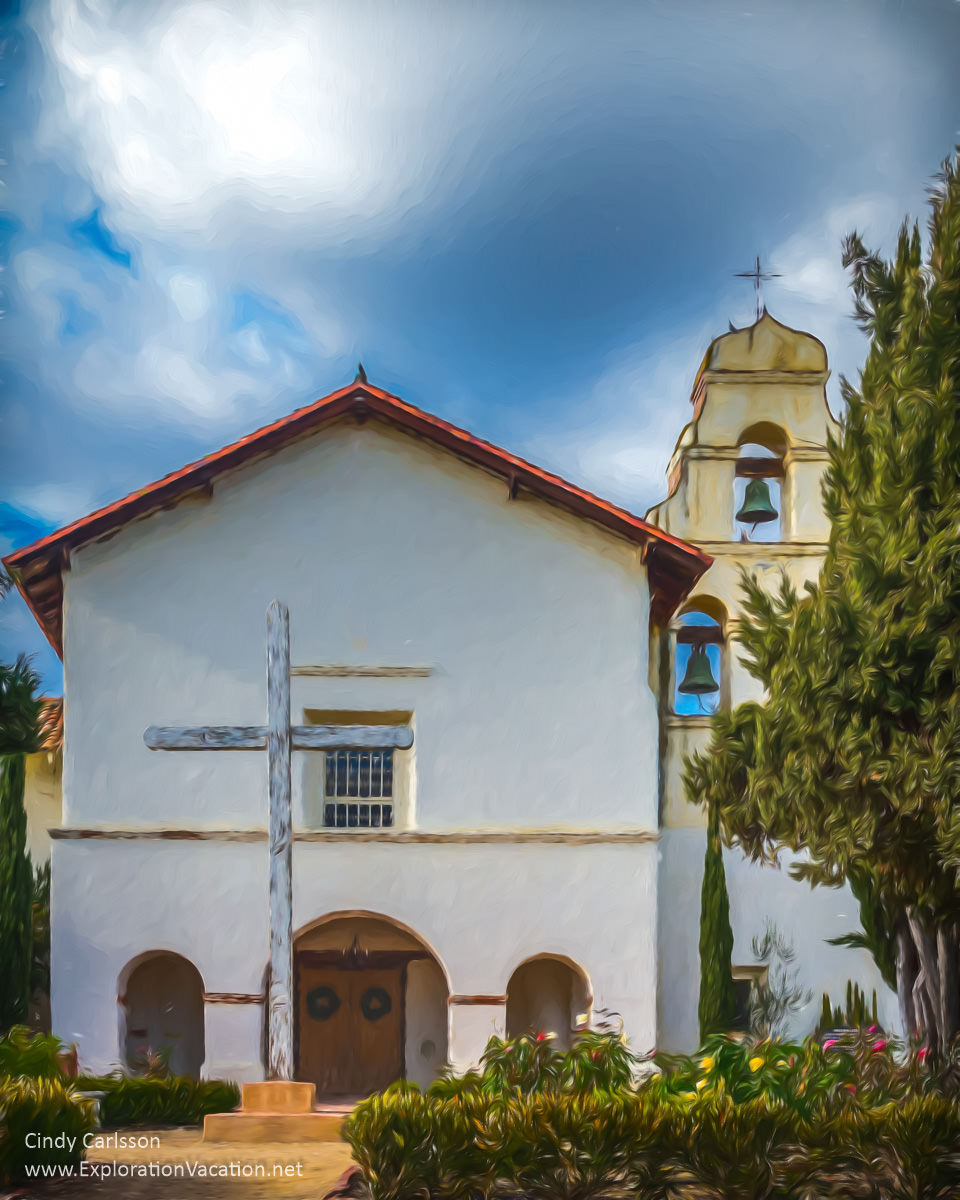 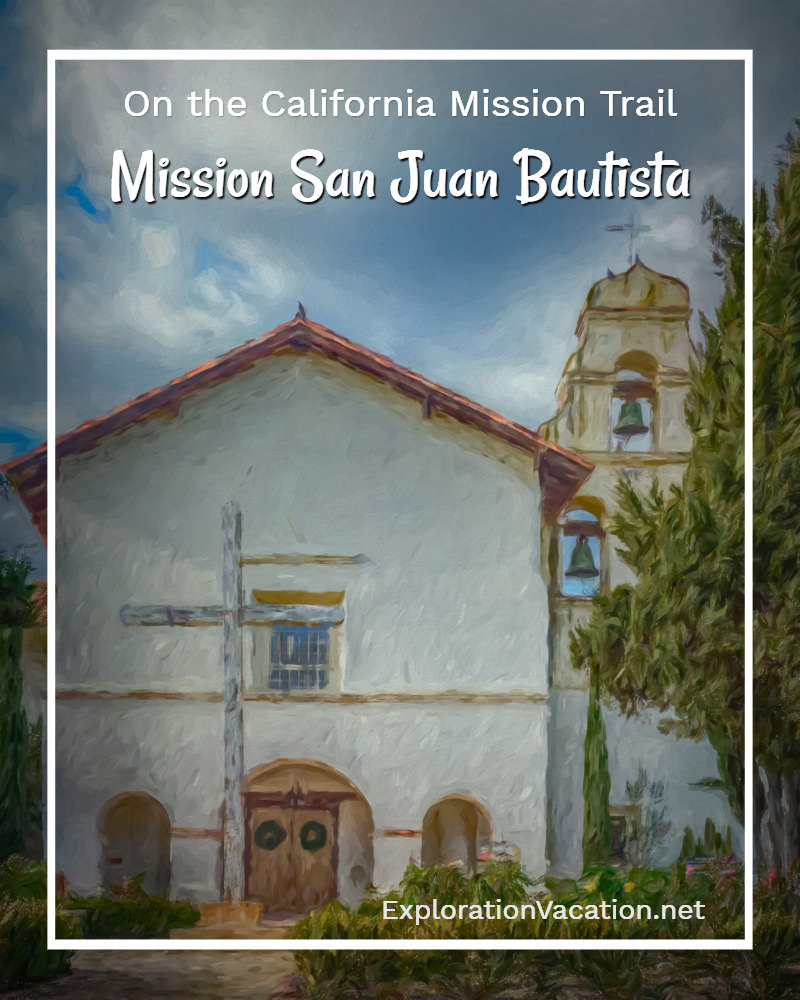 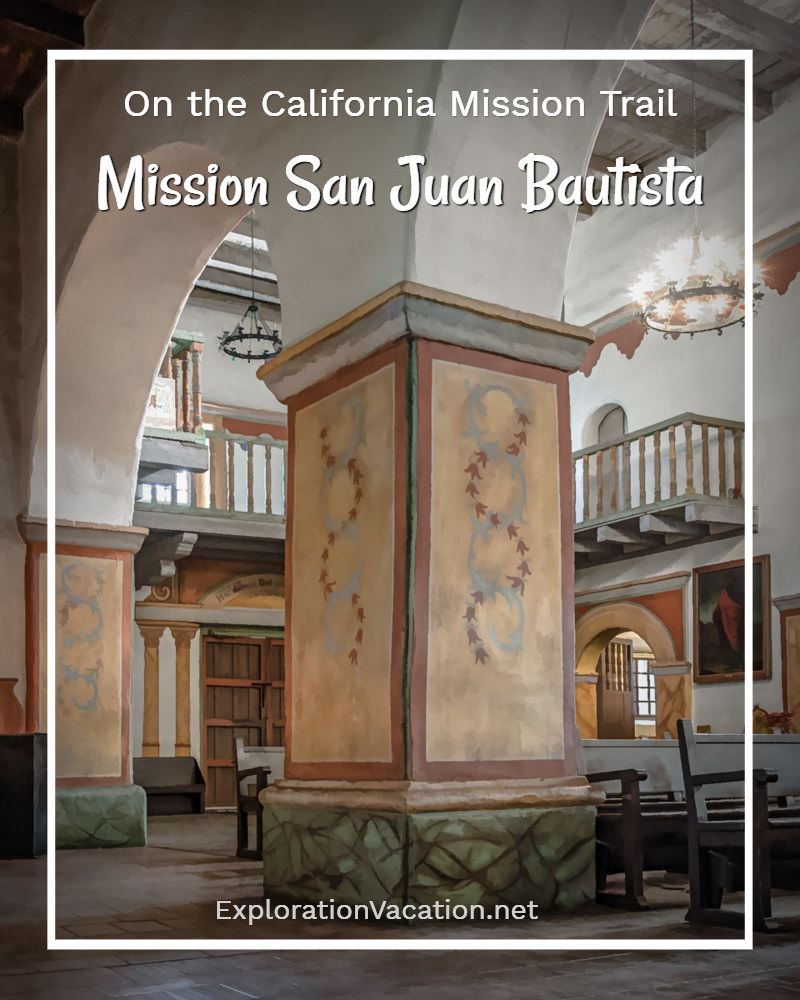 5 thoughts on “The past is present at Mission San Juan Bautista, California”