In the 1920s, Postdamer Platz may well have been the busiest crossing in all of Europe – a bustling commercial hub. 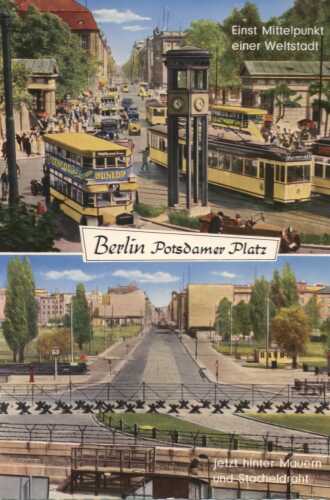 (It was such a busy place, with so many vehicles of all types, that it was home to one of Europe’s first traffic signals.)

That all came to an end during World War II, when the area was almost completely destroyed.

Then the Berlin Wall went up in 1961, bisecting the area and leaving it pretty much a forgotten wasteland for a generation.

However, with the end of the wall, Potsdamer Platz has again become a bustling hub within the city. While the area is filled with architecturally dramatic buildings, none are more dramatic than the Sony Center, which includes numerous shops and restaurants along its wonderful covered plaza and a few rather oddly preserved remnants of the historic Hotel Esplanade.

Although it has been controversial, I think it’s a great example of a modern public square.