The sun is shining when we land in DC, so we get out on the mall as fast as we can. 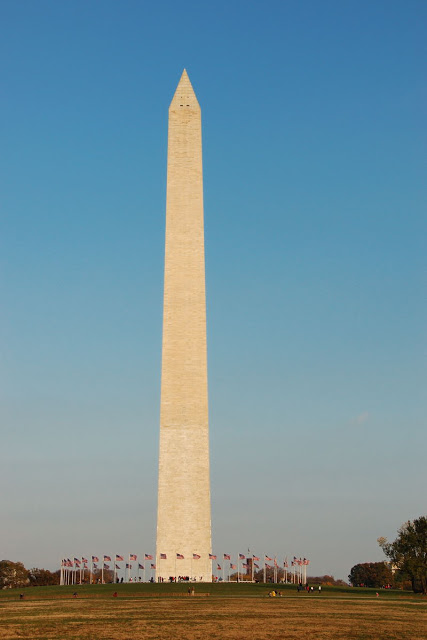 Perhaps today would have been a good day to go up into the Washington Monument, but we haven’t arranged for tickets, so we continue on.

The World War II Memorial hadn’t yet been constructed the last time I was here. Now it sits at the base of the Washington Monument, filling the space where once there was only an elegant reflection of the older monument. This seems an odd location. Actually, the monument itself seems odd – I can’t figure out what it reminds me of, but Lane identifies it right away: Its design reflects that of a WWI memorial.

We walk around, rather than through, this massive period piece and end up at the stairs below the Lincoln Memorial. We skip that memorial as well and instead head toward the Vietnam Veterans Memorial.

As we approach the elegant black wall, I wonder how a monument so simple and unobtrusive can engender such strong reactions.

And at first it doesn’t. It seems like just another stop on the tourist trail. Has the monument lost it’s power after repeated visits? Did I not recall it correctly?

However, as we walk along, a few names carved into the dark stone lead to a few more. . . and then more and more, a seemingly unending list. A loss too great to really understand.

At various points small gifts, pictures, and letters have been left by those who remember.

Everyone needs to remember.

It’s unfortunate that the creators of so many other memorials on the mall couldn’t figure out how to induce the emotional understanding that this simple memorial does. Maya found an unexpectedly perfect form for humanizing the cost of war. Perhaps the Korean War Veterans Memorial, with it’s dead-looking soldiers perpetually slogging forward, is the only other one on the mall that even comes close.

Of course, one can always head out to Arlington and wander through the endless rows of white crosses. That is sure to get one thinking about the reality of war – especially when remembering that there are other cemeteries like this in France, England, Russia, all over the world.

It is a blunt reminder that, even if you “win,” war isn’t something to celebrate. War is the result of failure. Sometimes it may be necessary, but it is never desirable or good.

Our route back to the hotel treats us to glimpses of some of the city’s most famous sights.

DAR is sort of a family joke in our household, as someone in Lane’s family at one time began the membership process, but a lack of interest combined with the organization’s racist history prevented anyone from ever completing the process.

The daughters do have a handsome building though, with carefully detailed features.

Around the corner, behind Constitution Hall, chicken and ribs are being barbecued on a large grill parked at the edge of the street. A group of African American men of varying ages cook the meat, guard the entrance to the hall, and generally just hang out. As we pass by, I think how far we have come since the day DAR refused to allow Marian Anderson to perform in this very hall and I wonder what show is taking place tonight that drew this group. Later I find out that it is Smokey Robinson.

Change is slow, but the world does move forward and maybe, just maybe, people can at least learn to tolerate one another – even if they can’t actually learn to love each other.