My best shots from this winter’s visit to the Minnesota Zoo were of the Amur leopards.

One of 10 subspecies of leopard, Amur leopards – like all leopards – are nearly extinct in the wild. These beautiful leopards are native to China, Korea, and the far east of Russia, but less than 50 are believed to remain in the wild. Efforts have been made to preserve and even re-establish suitable habitat for them, but, at least for the foreseeable future, you are far more likely to see one of these beautiful creatures in a zoo than in the wilds of the Far East. You might as well go see them at the zoo.

The Minnesota Zoo has four of these rare leopards, one male, one young female, and two breeding females. When I visited the three resident leopards (one female is currently on loan to another zoo for breeding) were all on display along the Russia’s Grizzly Coast section of the Northern Trail.

Tamara is the youngest of the zoo’s leopards. She was born at the Minnesota Zoo a couple of years ago and is now reaching adulthood. When I visited she was very active and making lots of noises, probably trying to attract her first mate.

The other female (I think this is Oksa, but maybe it is Tamara’s mother Polina.) was napping in a sheltered area of her enclosure when we arrived, but then came out to stretch and take a look around before finding a comfortable branch from which to watch us watching her. 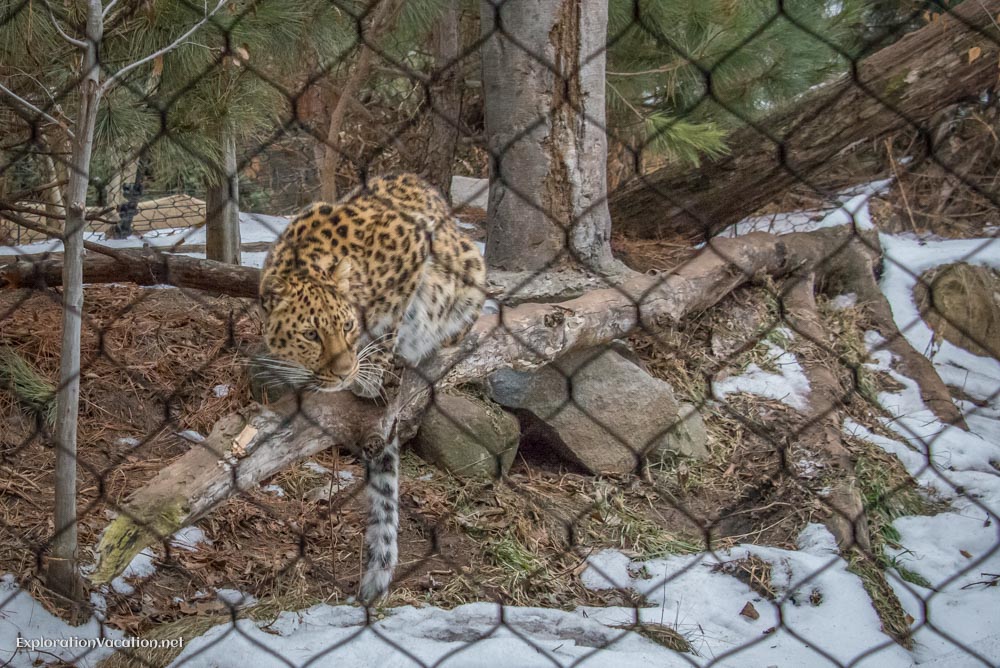 These are amazingly graceful animals – they must be phenomenal hunters – and I wish they had more space to roam. They’d probably appreciate more solitude as well. The females don’t have solid barrier separating them from visitors (just mesh fencing), so they must always be aware of the people watching them. I suspect they find us irritating; noisy, slow-moving prey that is so close and yet so unreachable.

The sense of being food as far as these animals are concerned was especially strong with the zoo’s male leopard, Chobby. His display has a glass wall that you can walk right up to (and leave finger prints all over, if you are so inclined), so you literally have nothing between you and this beautiful deadly cat except a (mostly clear) piece of glass. It’s amazing.

Chobby was resting along the glass wall when we first walked up, but after a bit he sat up and alternately posed and watched us. While he kept an eye on us, he also acted bored with us; it was obvious from his interested/uninterested watching that he was very aware of the clear barrier separating us, making us of only moderate interest. Still, he kept checking, as if keeping track of us.

At one point I unexpectedly made eye contact with him. To suddenly be confronted with the cold look of a wild animal sizing up potential prey is startling, to say the least.

While I’d love to see one of these animals from the safety of a group or a vehicle, I certainly wouldn’t want to stumble across one while hiking. They are perfectly attuned to their environment in a way humans are not.

The Minnesota Zoo is located south of Minneapolis in Apple Valley. It is open year-round. The Amur leopards are located in an unheated outdoors exhibit area, so dress for the weather.

Are you familiar with Rakuten, the online shopping app that gives you cash back when you make a purchase? Did you know you can use Rakuten for travel bookings? Well, you can! END_OF_DOCUMENT_TOKEN_TO_BE_REPLACED