The Mayan ruins of Kabah cover a vast, but mostly unexcavated, site only a dozen miles from the more well-known ruins of Uxmal. Both cities are Puuc (a late Mayan architectural style found) and there was a close relationship between the two, but there are distinct stylistic differences between them. Kabah also was in use for a shorter period, as it was largely constructed by the 9th century and abandoned by 13th.

Despite the site’s proximity to Uxmal, relatively few visitors make the short journey to Kabah. (We were almost among them, as a long morning at Uxmal left us with limited time and energy for more exploration.) On arrival, we find a striking site with only one other couple visiting.

Not wanting to share the ruins with anyone else, we head in a different direction. This takes us to the nearest and most interesting building, the Palace of the Masks (also known as the Codz Poop).

The masks are believed to represent the hook-nosed rain god Chaac, complete with elaborate earrings.

Nearly all of the large looped noses are broken now, but when intact they resemble a rolled up mat or blanket, leading to the name Codz Poop or “Rolled Mat.” 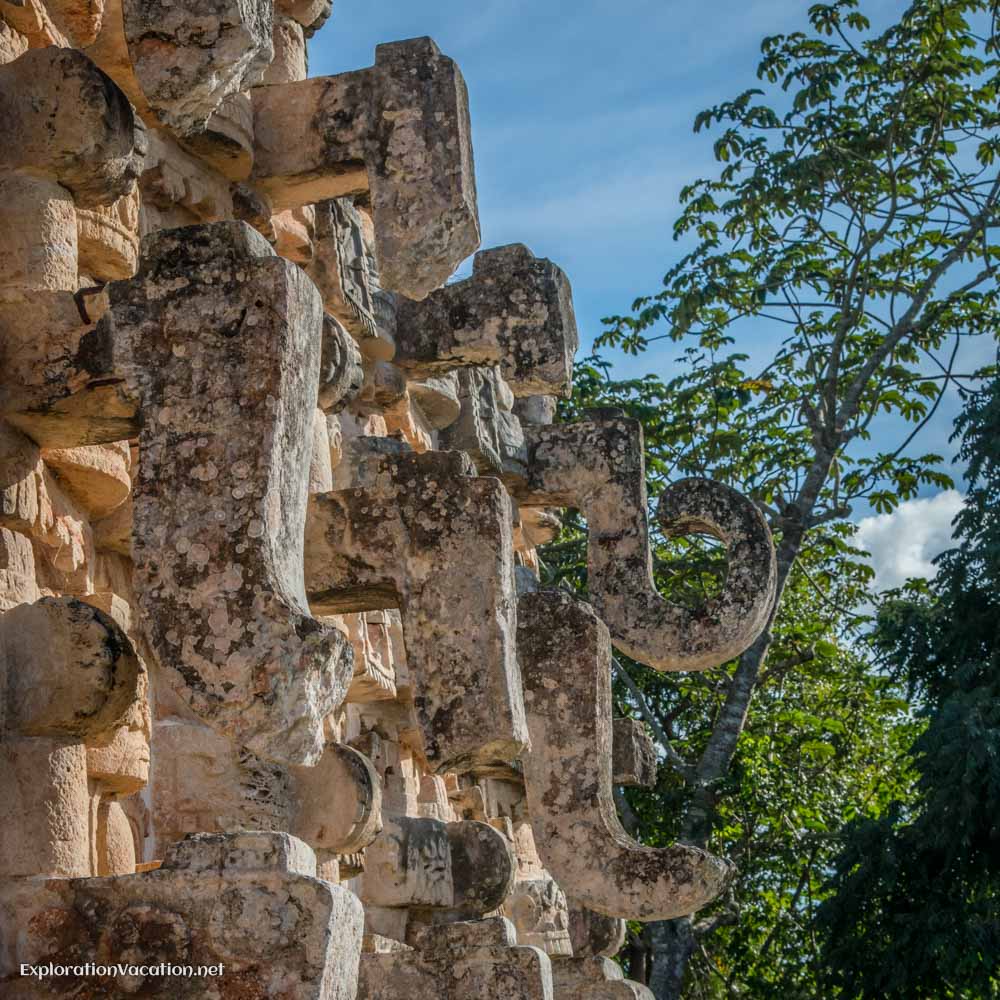 You can’t circle the Codz Poop, so we head back down the steep stairs and walk around the building’s platform to get to the other side. Here we find another set of stairs. Lane decides to remain at ground level (did I mention that the stairs on Mayan structures are VERY narrow and steep?), but I head back up to take a closer look at a couple of very human-looking carvings.

These carvings apparently represent a king, complete with elaborate headdress. In their realism, they are unlike any of the carvings I’ve seen at other sites.

A series of rooms opens up below them. I feel like an explorer here, peeking in the rooms and discovering a doorway with beautiful bas-relief carvings of warriors in battle.

I also have a good view of the largely collapsed Palacio or Teocalli, which faces the Codz Poop on this side.

It’s not the only unexcavated ruin here – the surrounding woods are filled with evidence of collapsed structures. I suspect there are many, many treasures yet to be discovered here.

The other large excavated structure here is known – for obvious reasons – as the Temple of the Columns. 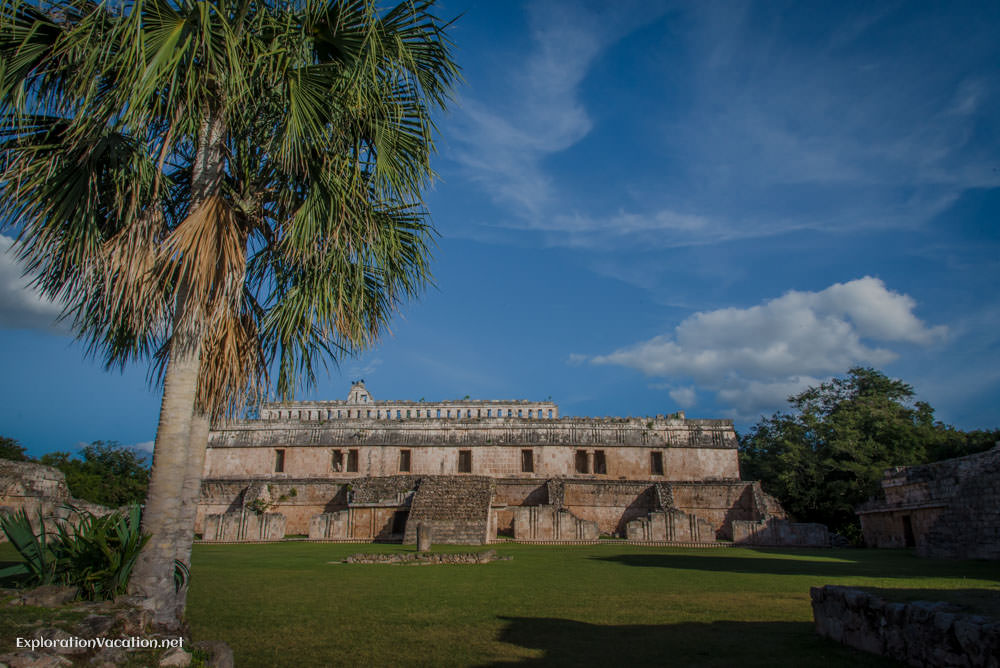 We like the buzzards nesting at the top. I wonder if they are like the ravens at the Tower of London – was it their departure all those years ago led to the end of the Mayan kingdom? (And does it mean that are back? Will the Mayan people rise to power again?)

There are other ruins here as well, a few of which have been excavated, many of which have not. It would be easy to spend more time wandering through the ruins here and imagining what this place looked like when the city was occupied and these walls were intact and brightly painted.

Architecture, Restoration, and Imaging of the Maya Cities of Uxmal, Kabah, Sayil, and Labná (Reed College)

The Kabah Archaeological Zone is open daily from about 8-5. It includes the structures featured here (located just beyond the ticket office), as well as a classic Mayan arch and unexcavated ruins on the other side of the modern road. The entry fee at the time of our visit was under $5.

Although Kabah is on the Puuc Route and near Uxmal, it does not get a lot of visitors. We were joined by only a few other couples and one small tour group during our time here. Most tours will only stop here for a few minutes, but you could easily spend an hour or two wandering around the site.

For additional information on Kabah (and other Mayan sites) see: