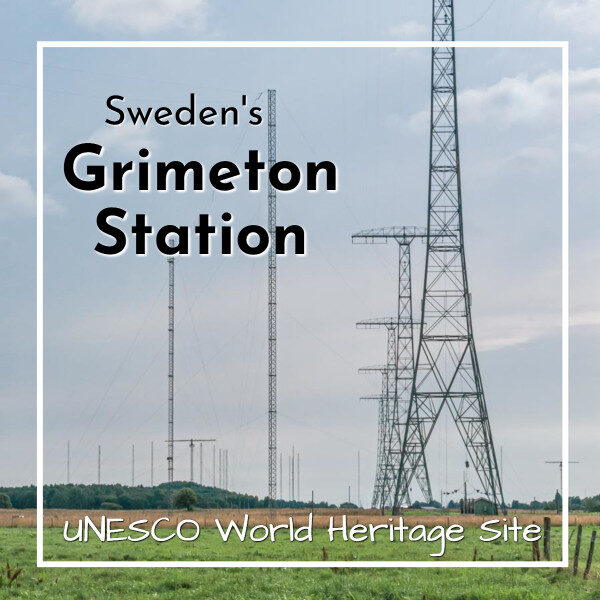 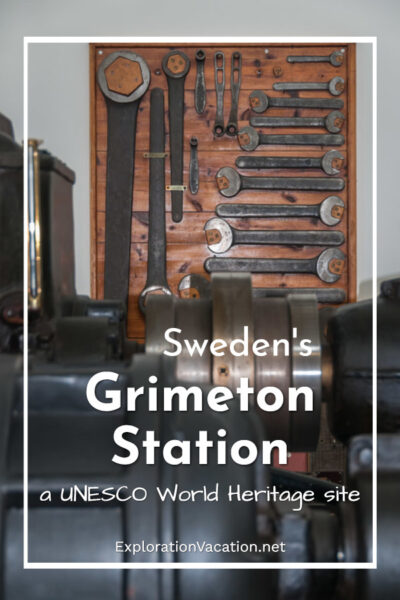 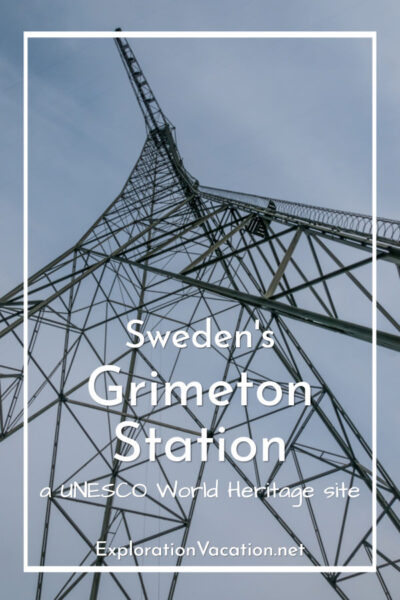 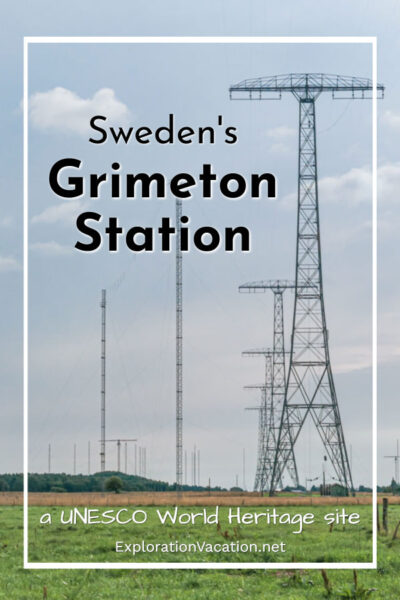 Grimeton Radio Station, near Varberg in southwestern Sweden, began relaying wireless transatlantic communications across the Atlantic in 1924. Today this rare and well-preserved station is a UNESCO World Heritage site.

My cousins took us to the Grimeton Station because it seems like the kind of place my father (a former telephone man) would find interesting.

I’m not sure how interested he is, but I see that whatever weird magnetism has taken me to the remains of various Marconi stations and similar sites around the world is still hard at work. I have no idea why I end up at these monuments to dead communication technologies, but by now it seems inevitable.

Varberg’s radio station was part of a relatively short-lived long-wave radio network that relayed messages between Sweden and the United States in the days before and during World War II. It filled a niche between the telegraph and the ascendancy of short-wave radio and telephone.

Discover an otherwise lost bit of technology at Grimeton Station

At the beginning of the 20th century, news that needed to be sent quickly was sent by telegraph.

That worked well as long as the integrity of the wires and cables needed to transmit those messages was secure. The outbreak of WWI made countries realize just how easily those lines could be severed.

Long-wave radio – which could send telegrams over very long distances through the air without wires or cables – was already being used as WWI began. But, by the end of the war, most countries fully understood the value of a communication system that didn’t require wire or cable.

One of those countries was Sweden.

At the time, Sweden was highly dependent on underwater telegraph cables. The war made that vulnerability very clear.

A vital, but short-lived, technology

Sweden had three options when selecting their radio system. They chose a system owned by the Radio Corporation of America (RCA). That decision was based on a desire to fully integrate with systems in the USA. But RCA’s technology also used Alexanderson alternators – the invention of a prominent Swedish-American. That may or may not have influenced the government’s decision as well.

The Alexanderson alternator spins a specialized disk fast enough to generate a current. That current is transmitted to an antenna and sent over the airwaves. Like the telegraph, messages are created using Morse code. Unlike a telegraph, this type of long-wave system requires both massive equipment to generate the current and almost insanely tall antennas to transmit the signal.

This technology was becoming obsolete even as Grimeton Station began operating in 1924. However, it was wildly successful in Sweden, where it quickly transmitted 95% of the country’s telegram traffic to the USA.

By 1930 a new technology, short wave radio, was added to the station. This replaced the long-wave system for most purposes, although long-wave system was still used to communicate with submarines. These wireless technologies proved their value during the war when Sweden’s underwater cables were cut. That left this this small station in rural Sweden to serve as the country’s link to the rest of the world.

The long-wave system was used for naval communications until 1960. But the equipment remained in place and maintained in working order even after it was no longer in use.

The Grimeton Radio Station was once one of nine long-wave radio stations using this technology to link Europe and North America. Today it is the only remaining example.

The station became a UNESCO World Heritage site in 2004. But it is also still a fully functional station capable of transmitting messages using a number of different systems. They even start up the Alexanderson alternator each year and send a few messages using old-fashioned long-wave technology.

We are lucky and get a guided tour in English. That means we learn how all this equipment, including the Alexanderson alternator and tuned antennas, actually worked. 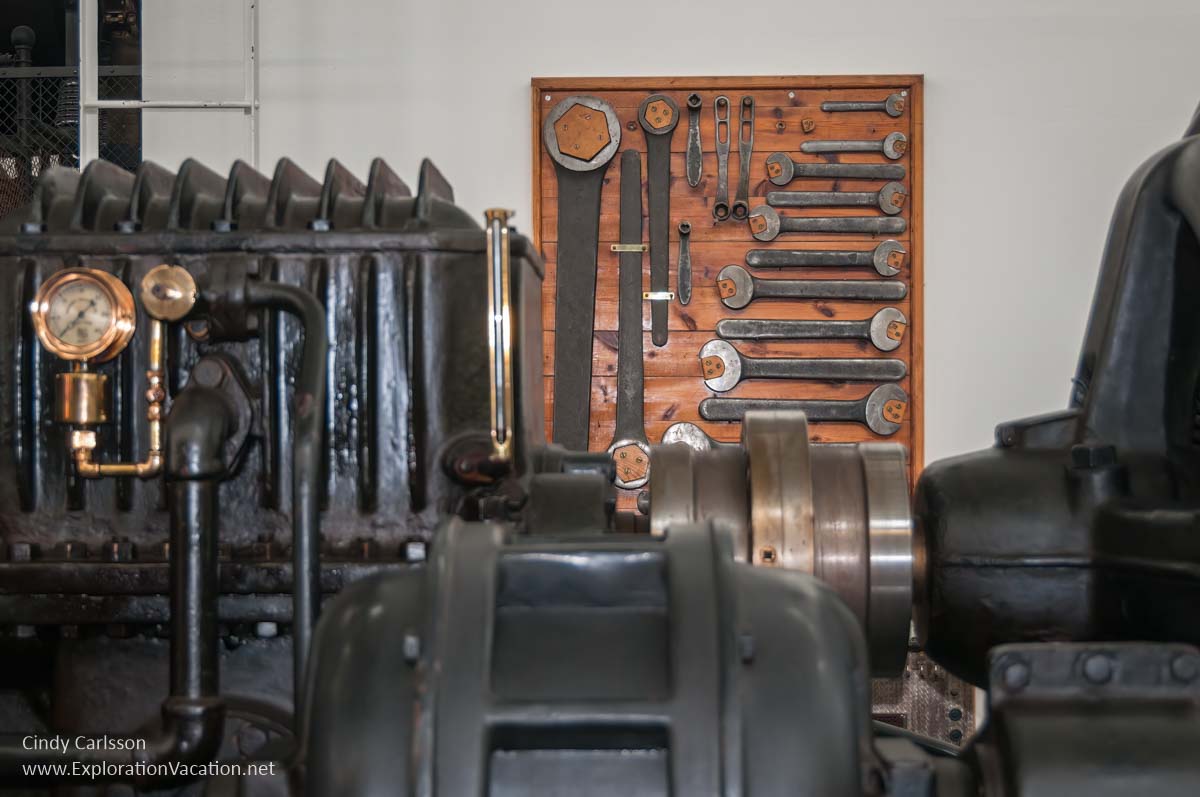 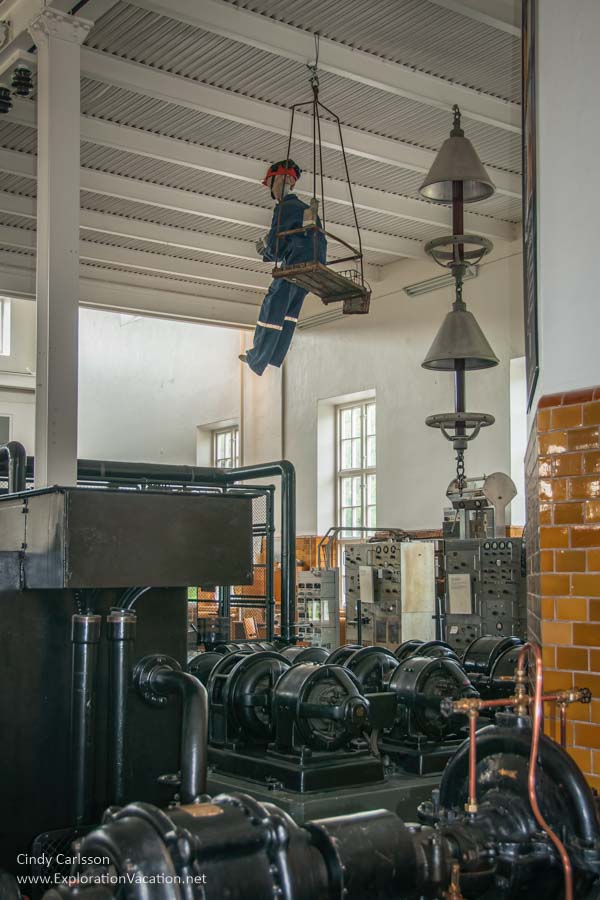 It’s pretty cool. The station is perfectly preserved and immaculately maintained to keep it operating indefinitely. As such, it’s a time capsule that gives a sense of what this place would have been like in its heyday during WWII. . . but without the all the people needed to keep things running or the deafening noise the alternator creates when in use! 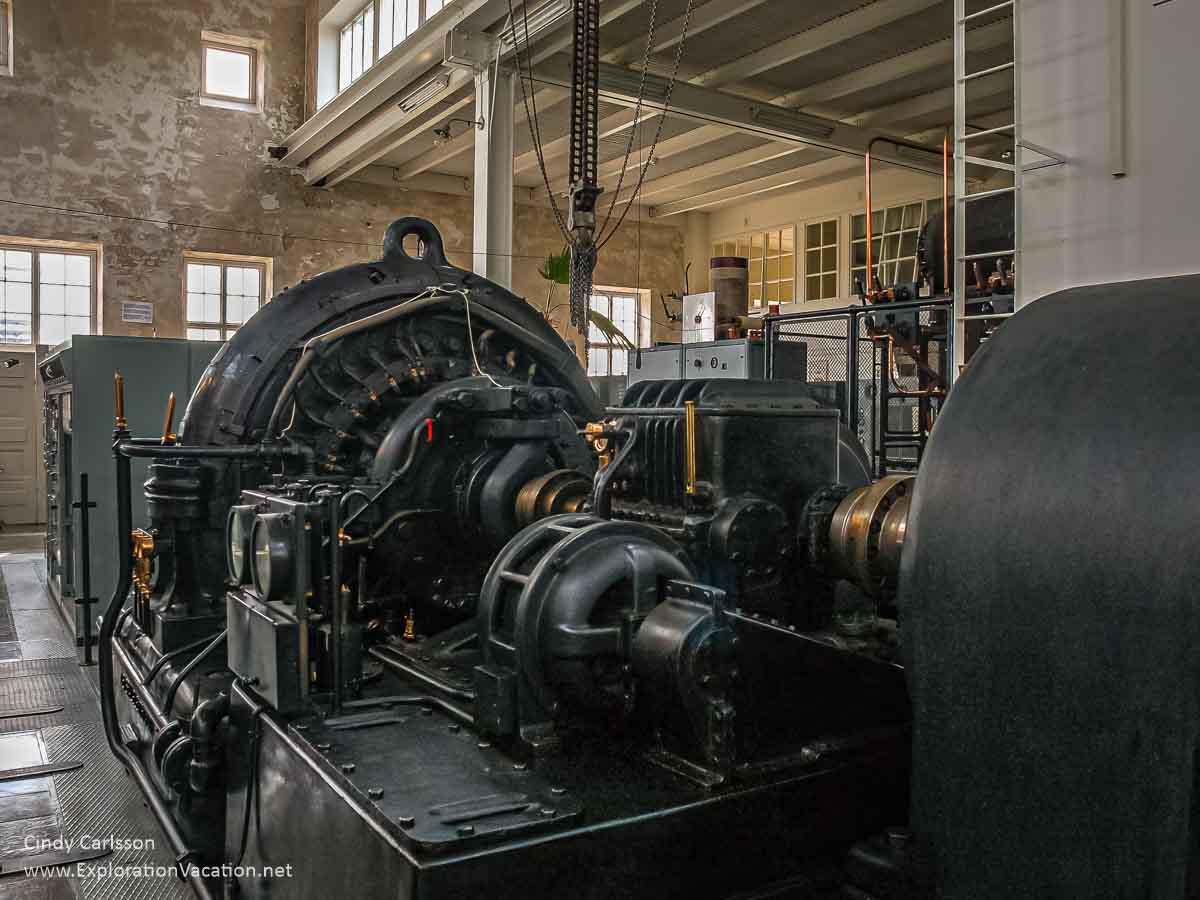 (That’s just part of the Alexanderson alternator. The box beyond is the control panel. It was both big and high-tech for its time.)

On my visit, everything is still and quiet. That makes it a little hard to imagine what it really was like to be here in those frantic days when the news from New York might include a report on another victory by German forces.

Today the whole place evokes tidy Scandinavian efficiency, right down to the cooling pond outside that doubled as a decorative fountain. 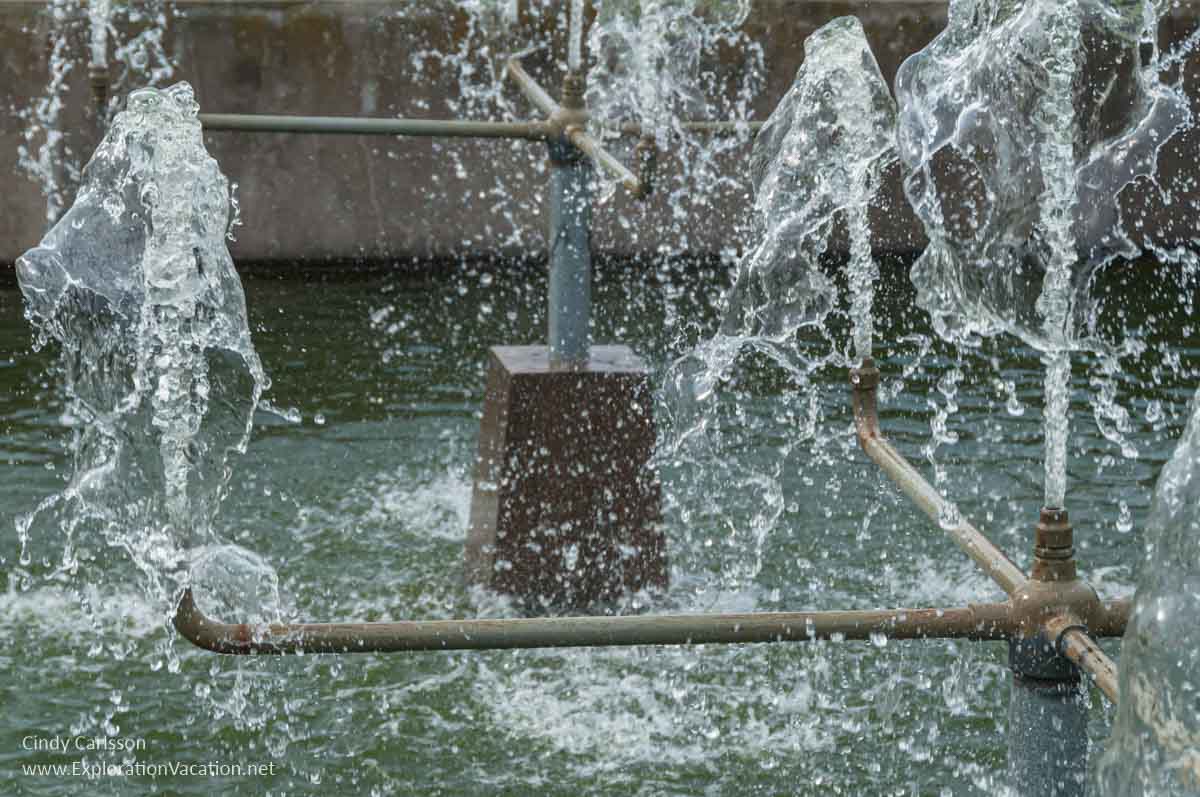 Under the radio towers

At 415 feet (127 meters) tall, the long-wave radio towers are a slightly eerie, almost alien form of industrial sculpture. They are at once both massive and delicate. 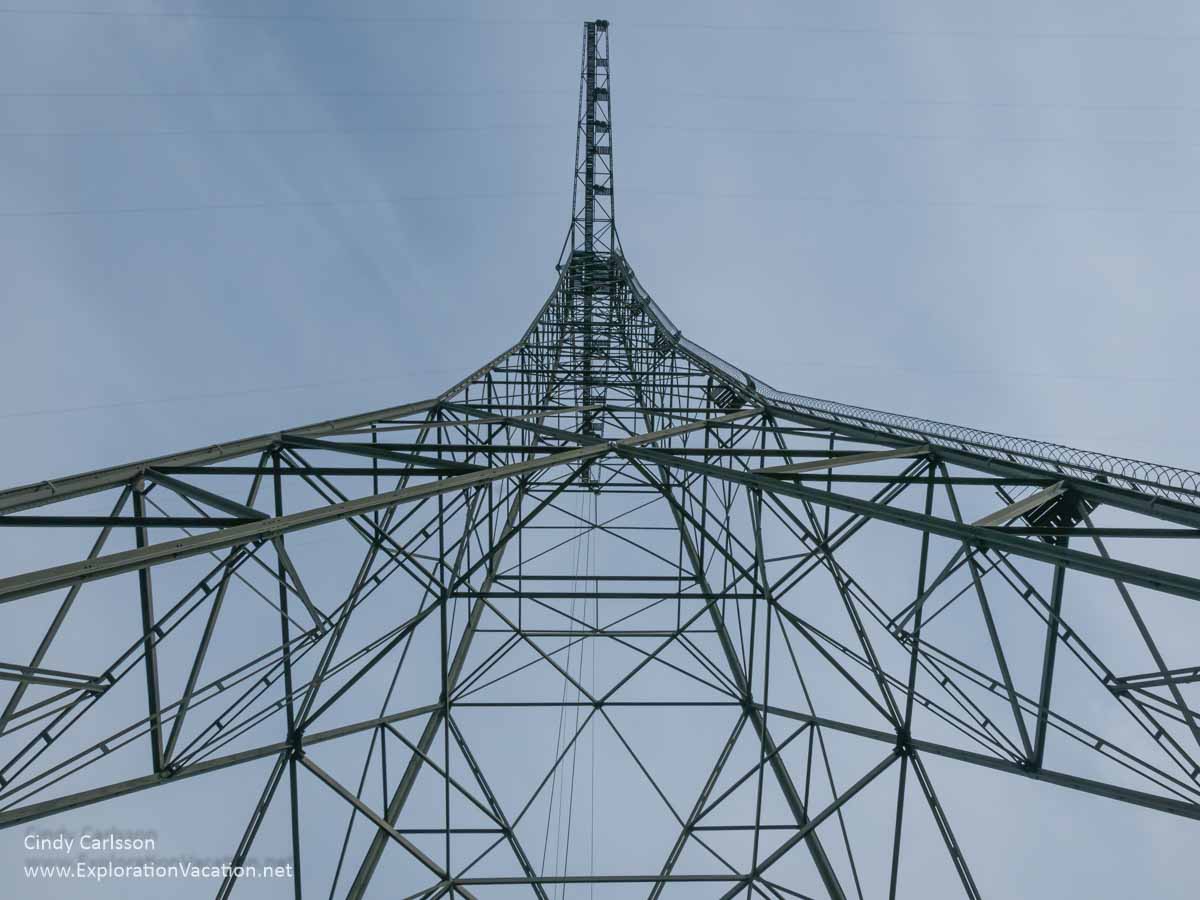 (Since my visit they’ve set it up so visitors can climb one of the towers. I like heights, but I think I’d pass on that adventure.)

The long-wave towers needed to be this tall to function properly. All of tallest towers here are part of the long-wave radio system and, together, they carry wire that forms a single antenna. An “antenna” supported by six towers and stretching over a mile. Aside from the removal of some of the wire, this is exactly the system that began operating in 1924.

But this isn’t the only type of radio signals transmitted from Grimeton Station, and different technology required different towers.

Together the towers create a both a visual history of radio communications and an intriguing landscape. 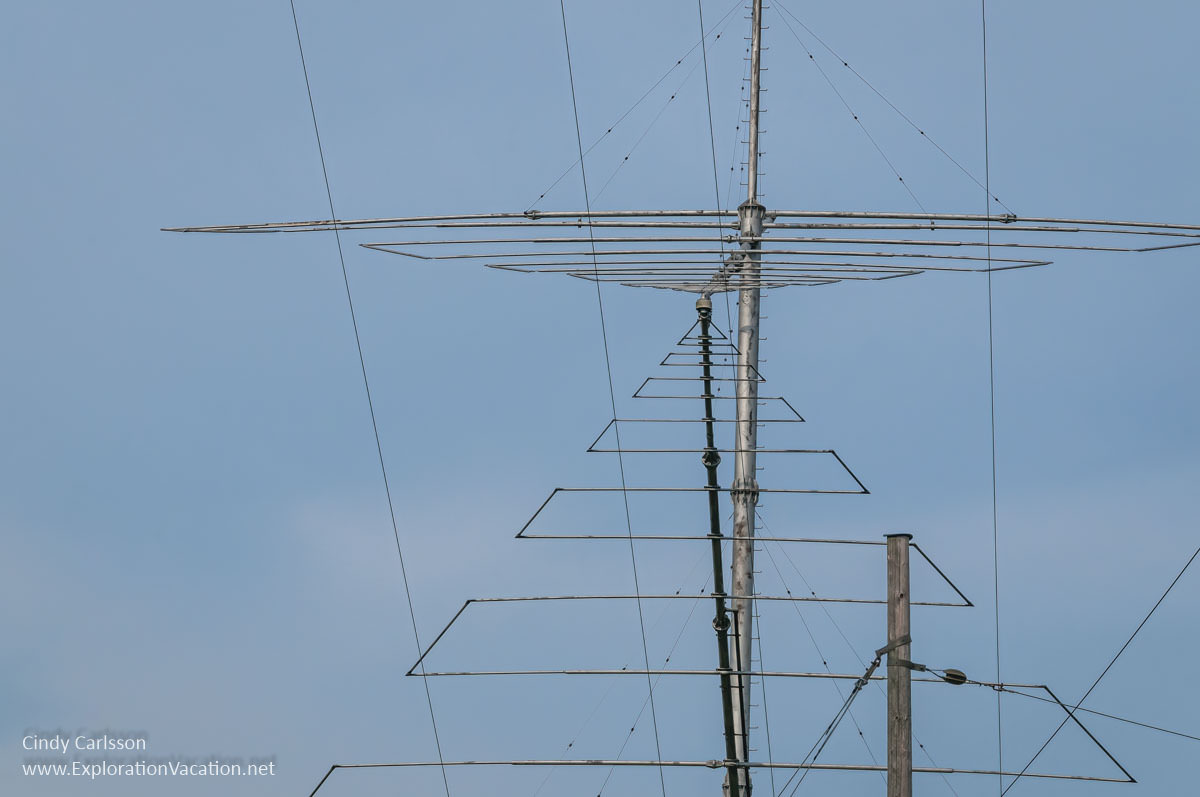 Grimeton Station still broadcasts occasionally at SAQ at 17.2 kHz using the historic long-wave equipment. Amateur radio operators also operate out of the station. You can follow them at SK6SAQ.

Plan your trip to Grimeton Station

Once part of a system of nine stations on both sides of the Atlantic, Grimeton Radio Station not only has the only remaining Alexanderson alternator in the world, it is also the only fully functional radio station left from this period.

The entire station, including the antenna field, is part of the UNESCO World Heritage site. But it is also an operational station, used by radio hobbyists and for commercial aviation and shipping.

Technology geeks will find a lot to like here. But, perhaps surprisingly, there are a lot of interactive activities and role-playing games designed to entertain and educate everyone, including children. Adventurous visitors can make a guided climb to the top of a long-wave radio tower and learn first-hand what it was like to work on those beasts.

Tours, informational signage, and games are available in both English and Swedish.

How do you get to Grimeton Station?

Gothenburg (Göteborg) is the largest city in the area, about 50 miles to the north of Varberg. Malmo is about 125 miles to the south. It’s about 300 miles southwest across the country to get there from Stockholm.

Once you get to Varberg, it’s only a little more than five miles to Grimeton Station. The site is on a regular bus route, making it easy to get there when traveling by train or bus.

Varberg is also on the Kattegattleden bike route that follows Sweden’s west coast for 230 miles between Helsingborg and Gothenburg. Two segments of this route meet in Varberg, making Grimeton a very easy stop.

The drive to Grimeton Station from Gothenburg takes about an hour. It’s a little more than a 2-hour drive north from Malmo. It will take over 5 hours to drive there from Stockholm.

Sweden has a good train system, making this an affordable and reasonably efficient way to get around. The system uses dynamic pricing, so tickets will be cheaper farther in advance and at less busy times. And trains are often fully booked when Swedes are on vacation, so book well in advance if traveling during the Swedish summer holidays and other busy times.

You can also travel by bus, but it is far slower than the train. Depending on your departure time, it will take at least 1 ½ hours to reach Grimeton from Gothenburg and 5 hours from Malmo.

Once you arrive at Grimeton Radio Station

The UNESCO site includes the original station and a large field with the towers. It appears a modern interpretive center and space for amateur radio enthusiasts were created in other buildings on the site since my 2010 visit.

I toured the Transmitter Hall when I visited. This is the actual station, complete with all of the equipment – including the Alexanderson alternator. Since my visit the informative signs have been expanded and there are more opportunities to walk through the steps required to start up the equipment. Different tours are available, depending on your level of interest in the historic equipment.

The site also has a gift shop with all sorts of interesting things and a basic café.

When is Grimeton Station open?

Grimeton Radio Station is open on a limited schedule that can change. Always check the website before planning your visit.

The Sunday nearest July 2 is Alexanderson Day. On that day they start up the Alexanderson alternator and broadcast messages.

The station is also open at other time for private tours. These need to be booked in advance.

What does it cost to visit Grimeton Station?

Ticket prices seem to be visible only by clicking on the date you wish to visit – and that information is not available as I update this late in 2021.

Once they are available, the online price should be lower than the walk-in price. And tours have limited capacity, so those tickets are best booked in advance.

Separate tickets are required for some activities, including the tower climb. These tickets do not include access to the radio station.

Parking is available at the site, usually at no charge.

A few RV spaces are available next to the parking area. These can be used overnight, but have no services. A small fee is charged at certain times.

For a small place, Varberg has a wide range of lodging options, from plush spas to simple seaside cabins.

Other things to do in Varberg

Varberg is a coastal city of 36,000 that was along the border – and caught in various battles – between Sweden and Denmark until becoming permanently Swedish in 1658.

This part of Sweden is popular with summer visitors for its wide, sandy beaches and outdoor activities like hiking, biking, and bird watching.

As noted above, the scenic Kattegattleden bike route also runs along Varberg. 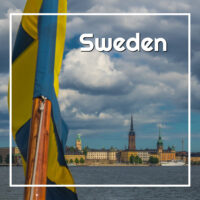 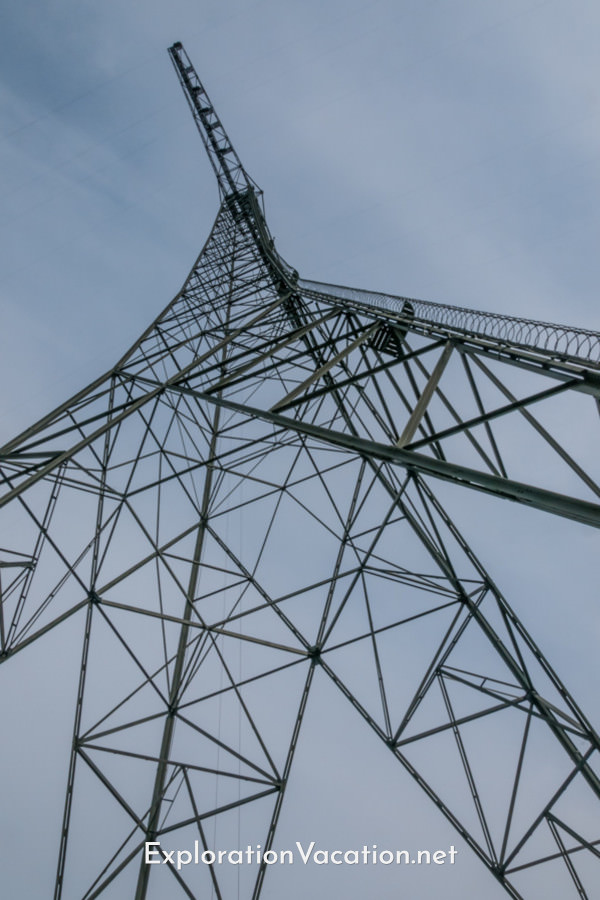 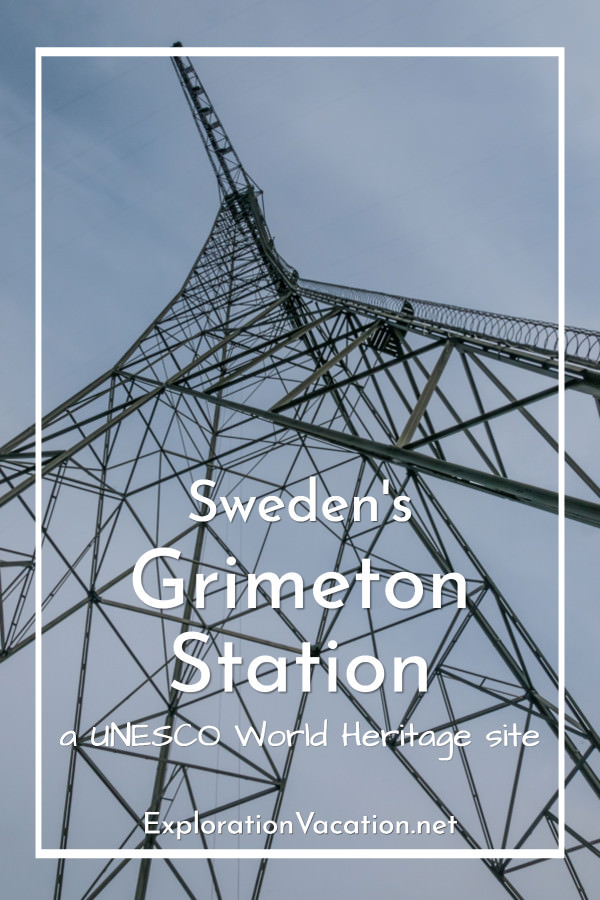