Cape Cod is the 65 mile peninsula of sandy beaches, woodlands, marshes, summer houses, shops, and marinas that juts out of Massachusetts into the Atlantic Ocean.

The Cape, not Plymouth Rock, is where the Pilgrims first landed in America. Not finding good farm land or fresh water readily available, they quickly moved on to Plymouth, where a natural harbor offered protection for their ship and land that the native population had already cleared and planted. (Having arrived in November, the Pilgrims didn’t have a lot of time to waste clearing land, they needed to get straight to the business of building houses before winter set in. A corn crop ready for harvest was a useful bonus.)

Despite being rejected by the Pilgrims, the Cape has attracted plenty of other folks over time. Long a base for whaling and fishing, tourism began to develop at the end of the 19th century when rail made the area accessible to Bostonians looking for a summer get-away. The Cape became a world-famous destination during the Kennedy administration, as the summer home of the glamorous president and his family. It hasn’t lost it’s allure.

I first visited the Cape as a day trip while staying with a friend in Boston many years ago. One day, while she went to work, I hopped on a train bound for Hyannis. I arrived without any plans for the day or even much of an idea of where I was – I just knew that I was on the Cape and I loved it. I had seafood for lunch and spent the rest of my too-brief time wandering through the neighborhoods along the sea, admiring the weathered houses, windblown roses, and views of the water. It seemed like heaven.

Since then I’ve visited at least briefly in every season except winter. I’ve traveled from end to end and back and forth across the peninsula, but there is much I haven’t seen so I’m always discovering new things.

Among the places I haven’t seen are the islands of Martha’s Vineyard and Nantucket. They are both high on my list for future trips!

Although all part of Barnstable County, the Cape is commonly subdivided based on distance from the mainland. (Note: Each sub-area includes a number of towns which, in turn, may include a number of smaller villages. 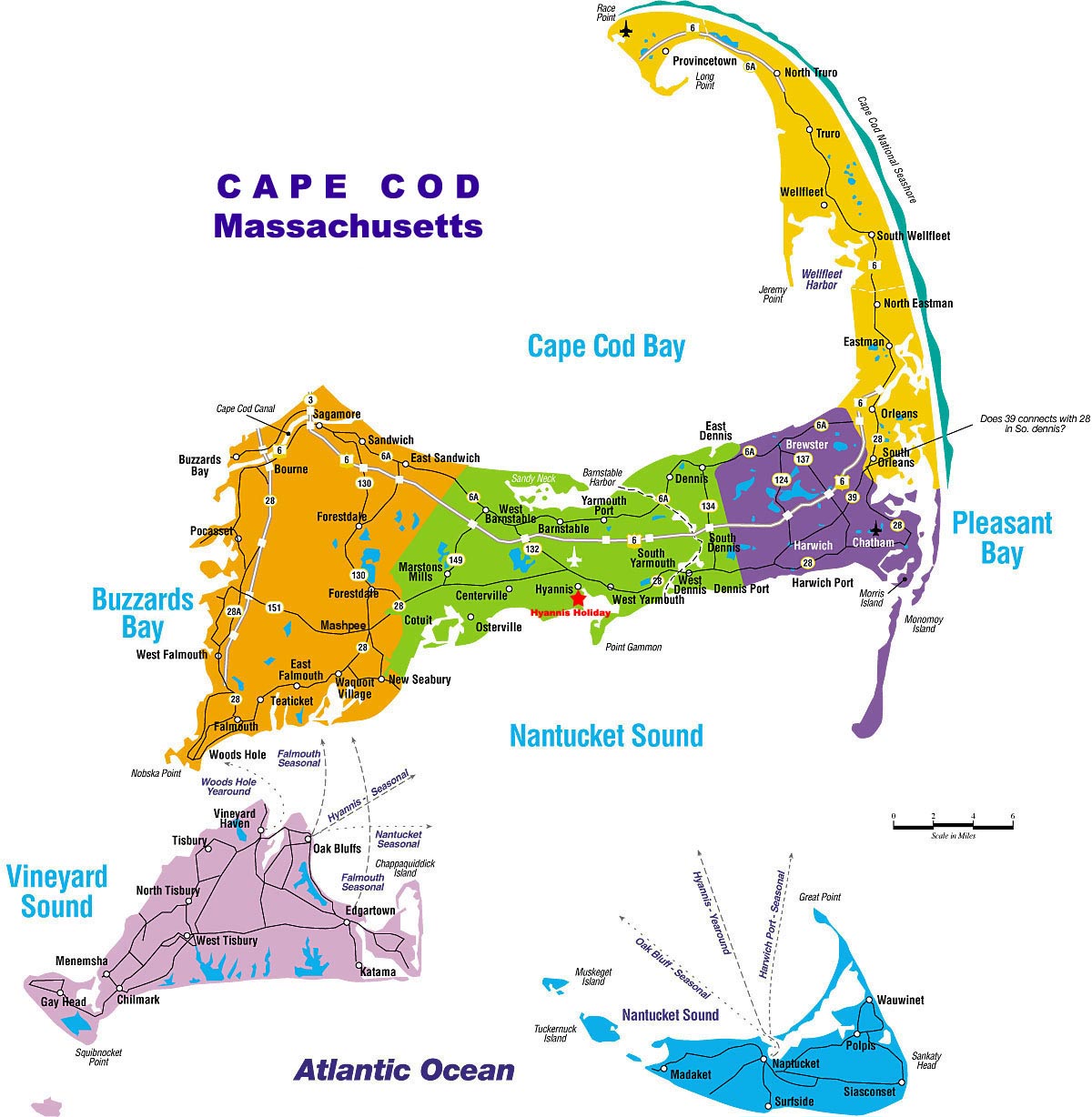 This is the area nearest the mainland and consists of the towns of Bourne, Sandwich, Falmouth, and Mashpee.

The Mid-Cape is the next group of towns away from the mainland and consists of Barnstable/Hyannis, Yarmouth, and Dennis.

The Lower and Outer Cape

The Lower Cape is either all the rest, from Brewster and Harwich all the way out to Provincetown, OR it is only the towns of Brewster, Harwich, Chatham, and Orleans. If the latter, then the Outer Cape consists of the towns of Eastham, Wellfleet, Truro, and Provincetown.

Wellfleet is a quiet, artsy town surrounded by marshes. It’s one of my favorite places on the Cape.

Provincetown is the Cape’s lively end point. Long a creative haven for the gay community, it’s a city of contrasts – lots of options for shopping, eating, and partying surrounded by miles of windswept dunes and empty beaches.

Unfortunately, while you can reach the Cape via ferry or train (in the summer), if you plan to stay for any length of time in the summer, you’ll need a car (or maybe a boat). While the Cape seems ideal for biking (being relatively flat and laced with roads and trails), the trails aren’t adequately connected to provide continuous routes and riding with vehicle traffic on the narrow roads looks absolutely terrifying. The exception is on the Outer Cape, where one probably could cover a lot of the area on a bike without too much fear of death because of the amount of protected National Seashore in the area.

The Cape has three main roads for much of its length:

I'm offering TRAVEL PHOTOGRAPHY for anyone using any camera on June 1 as a virtual class. Get more info and register.

You do NOT need to be a Minneapolis resident to participate.

Minnesota has 76 state parks and recreation areas, with the largest concentration in the exceptionally scenic northeastern part of the state. However, there are scenic areas throughout Minnesota and END_OF_DOCUMENT_TOKEN_TO_BE_REPLACED