There’s exciting news from Canada: The Winnipeg Art Gallery is ready to open the new Qaumajuq center for Inuit art and culture. 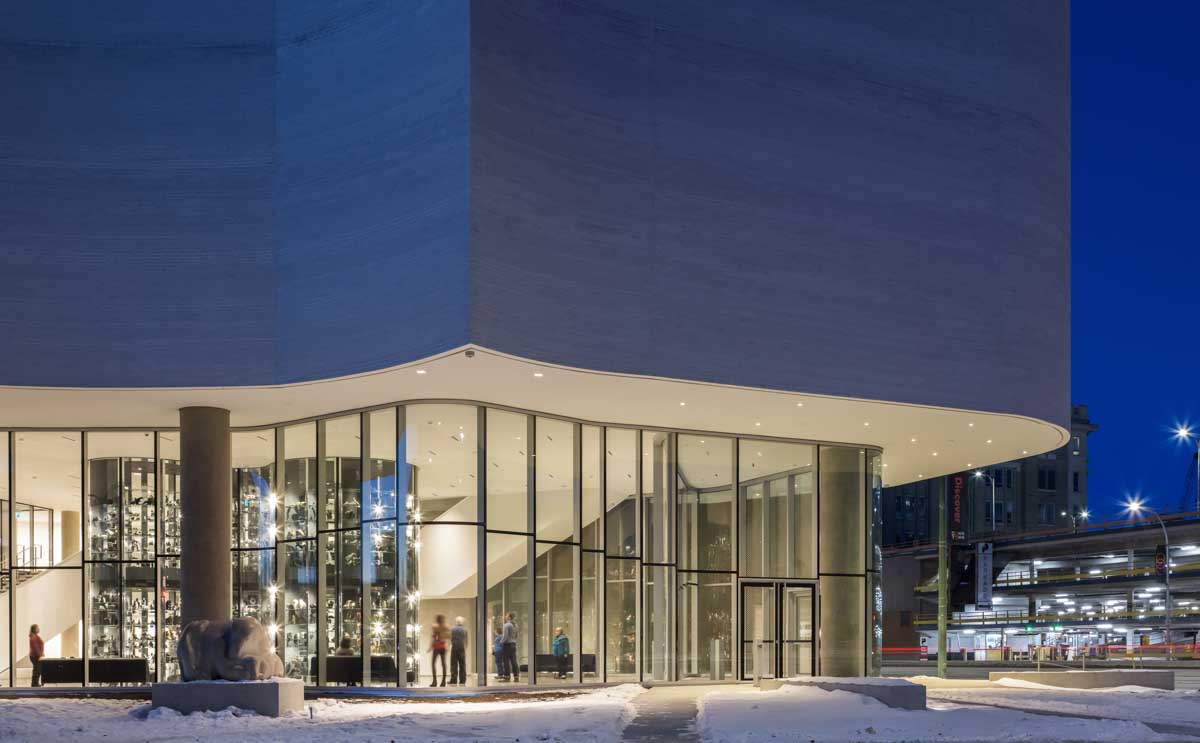 I made a virtual visit to Qaumajuq at the WAG recently. Some of us have been waiting a long time for this – and it looks like it was well worth the wait. Not only is there a huge exhibit area, but the new facility also has classrooms, art studios, a theatre, research space, and an expanded gift shop. But (for people like me who used to complain that the WAG displays far too little of their 14,000 piece Inuit art collection) the highlight has to be the three-story glass vault that puts about 5,000 Inuit sculptures in storage on display!

All this hints at the fact that Qaumajuq is designed to be much more than an art museum. As the WAG explains, it is

a place where art and technology offer direct connections to the land, people, and cultures of Inuit Nunangat, the homeland of Inuit in Canada

(The Inuit are the indigenous people of far northern Canada and Greenland. There are four Inuit regions in Canada, collectively known as Inuit Nunangat. The Inupiat of Alaska and Siberian Yupiks are also related to the Canadian Inuit.)

More than an expansion of the existing museum

But it does look a lot like a separate building. One designed to evoke the scale and light of the north.

That begins outside, where waves of sculpted white granite rise above the entrance’s glass façade like a mountain of windblown snow. 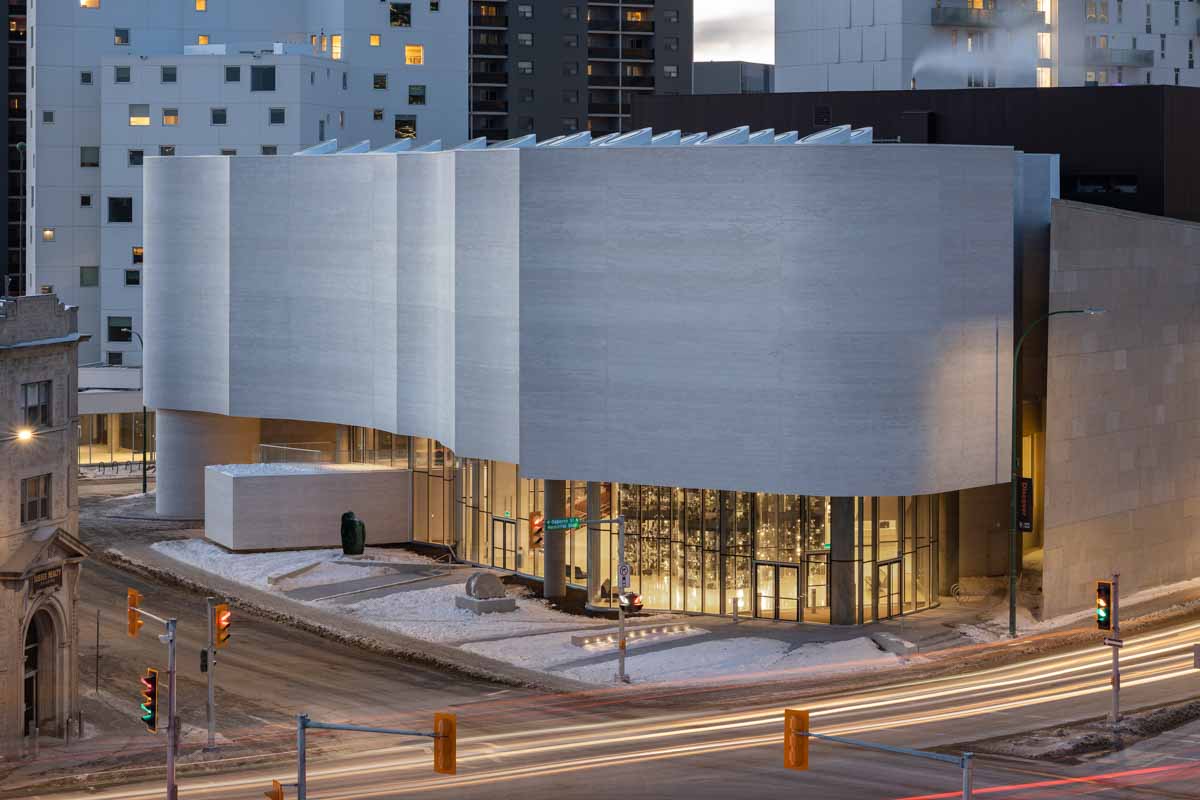 Inside, visitors can easily move between the Qaumajuq addition and the main building on all levels. The two also share a (completely re-imagined) gift shop and café.

Inside, Inuit carvings fill almost 500 shelves that rise through the building from the basement. These are visible to the public on all levels of the museum. But there’s more. Touch screens allow visitors to learn about a selection of pieces in the vault, making the WAG’s storage part of a very large exhibit!

You can get a sneak preview video of the visible vault on the WAG’s Qaumajuq Visible Vault page.

While the Visible Vault displays the largest number of pieces, rotating exhibits will be held in three distinct gallery spaces.

The names given to these galleries (and other spaces in the new building) are in Inuktitut (Inuit), Anishnaabemowin (Ojibway), Nêhiyawêwin (Cree), Dakota, and Michif (Metis). These recognize not only the Canada’s Inuit people, but all the Indigenous people of Manitoba.

The Main Inuit Gallery is named Qilak, meaning sky in Inuktitut. Located on the third level, it has 8,000 square feet of exhibition space for Inuit art. 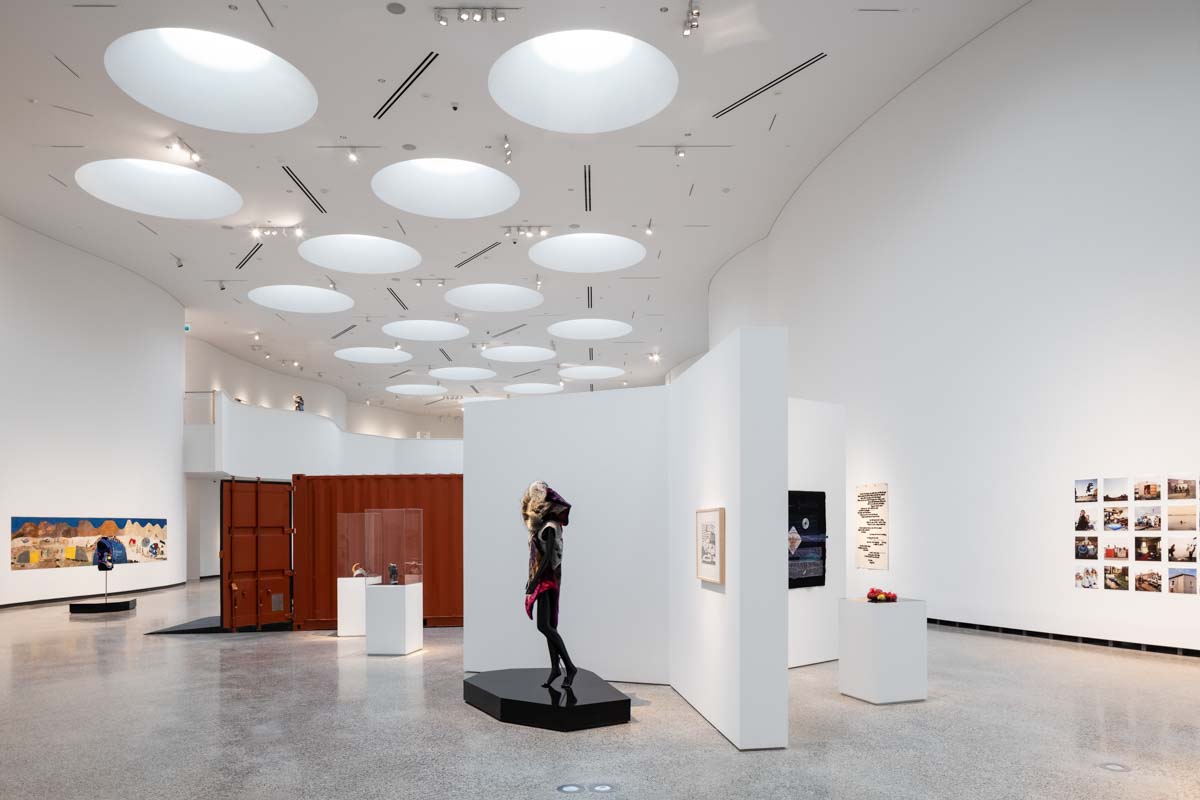 This expanse of towering white space is intended to reflect the natural environments of the North, putting the art into a setting reminiscent of the place where it was created.

However, this is the one part of the museum that leaves me a bit skeptical. This gallery is two full stories of white walls. Only a small portion of these will ever display artwork – most of this space is intended to place the art into an Arctic landscape.

I get that the idea is to express the vastness and isolation of the landscape in which Inuit art is (traditionally) based and created. But it looks as if it will overwhelm the art. And I wonder how well it actually reflects either the most significant influences on the work of Inuit artists past and present or the reality of their lives today.

But my skepticism might be completely off-base. And, if not, there are Inuit artists who work on a very large scale and could put those big, blank walls to good use!

On the upper level, the Giizhig/Kisik Mezzanine Gallery is a broad balcony overlooking the main gallery. The name means sky, heaven, day in Cree/Michif/Ojibway.  Despite its openness, it looks more intimate. This combined with its elevated position, should make it ideal for special exhibitions, events, and ceremonies.

I love the look of this gallery. It appears to offer a perfect balance between vast open spaces and the ability to closely connect with the art. And, as intended, it should be a wonderful performance space. I can imagine words and music drifting down to those below like voices from the spirit world.

The final formal exhibit space is the Focus Gallery. Its name is Pimâtisiwin, a Cree/Ojibway phrase meaning life and the act of living, to be alive. The name reflects the use of this gallery for video, film-based exhibitions or shows that require a more intimate, light-sensitive environment.

INUA is the inaugural exhibition in Qaumajuq’s Qilak Inuit gallery. Fortunately for those of us south of the Border, INUA will run through December 19, 2021.

INUA has two meanings that speak to both this particular exhibition and the broader goal of Qaumajuq:

The exhibit includes a wide range of work by 90 Inuit artists from across Inuit Nunangat (including artists living in the urban south), as well as work by artists from circumpolar regions like Alaska and Greenland. Work in the exhibit ranges from digital media and installation art to mixed-media sculpture, painting, textiles, photography, and more. New work commissioned for the exhibition is featured along with work drawn from existing collections and spans generations of artists.

A few pieces are featured on the website’s exhibition page. 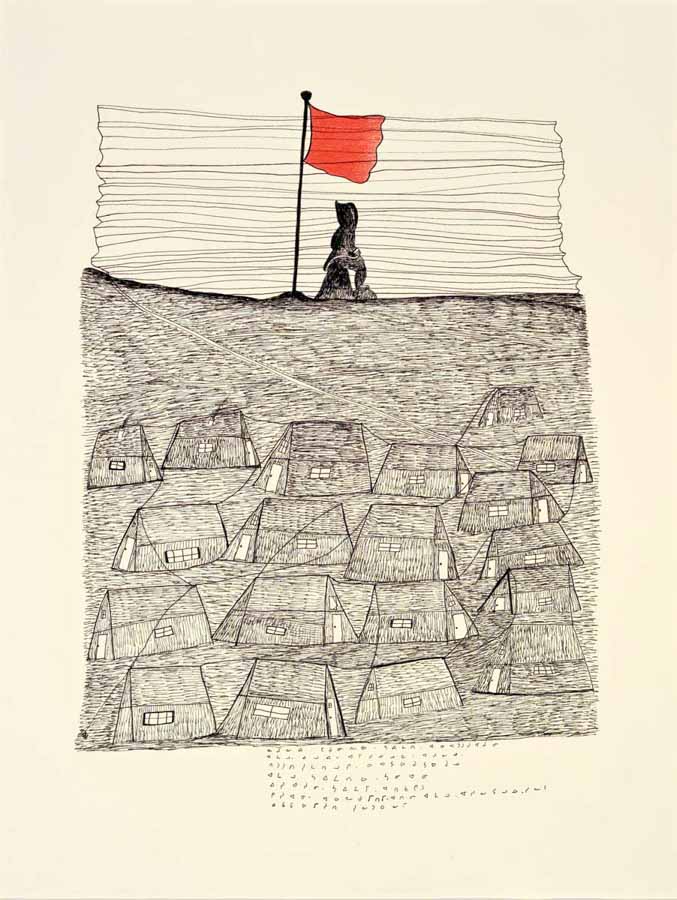 However, the live presentation offered a glimpse of even more interesting things, including a large selection of textiles and a motorcycle!

The virtual opening celebration is March 25-26

With COVID-19 limiting in-person attendance, the gala opening of Qaumajua will be a virtual event.

The virtual opening is free and accessible to all, streamed on the WAG website, social media, and through broadcasting partners. Both segments are approximately 60 minutes and start at 6:30pm CT. RSVPs are optional.

Note that I have not seen this facility in person. Most of my information comes from fact sheets, press releases, web pages, and a virtual press conference held by the WAG. All photographs are used with the WAG’s permission.

(While I almost never cover anything I haven’t visited personally, I’m an Inuit art collector and have been waiting for this day for a  long time. But Qaumajuq’s opening is a big deal for anyone interested in art that is truly North American.)

For a more slightly more detailed story, check the piece I wrote for the Inuit Art Society.